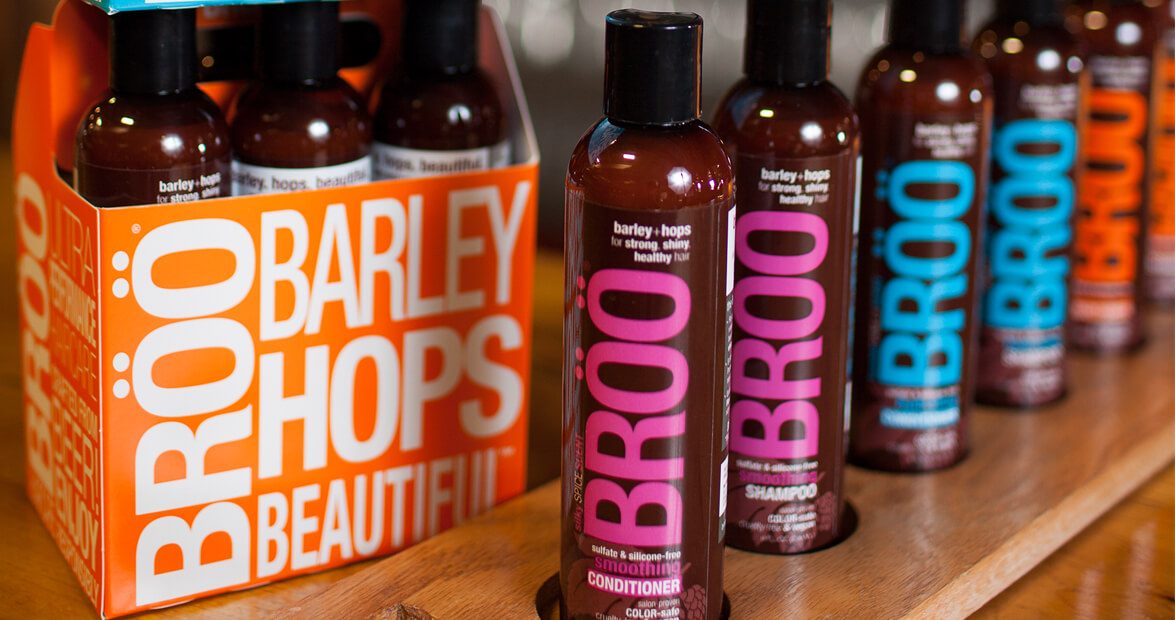 When lawyers-turned-entrepreneurs Brad and Sarah Pearsall moved to Asheville, they knew they wanted to start a business that would capture the essence of such “a healthy, outdoorsy, eat tofu kind of place.”

Having recently become more conscious about their own health, the Pearsalls’ minds’ first inclination was to create a line of natural beauty products. 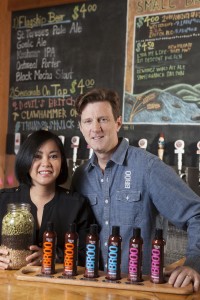 The Pearsalls hand delivered their first batch of BRÖÖ in 2011 to local Earth Fare stores. The brand has since expanded to include body wash and can be found around the United States as well as internationally.[/caption]

They needed to set themselves apart in such a creative city, so naturally, they looked to the next best option: beer shampoo. Wait, what? Beer shampoo?

Yeah, they get that a lot. In fact, they were just as confused when Brad’s mom first mentioned it to them.

“What do you mean? You dump beer on your head? Is that how you met my dad at a party or something? Is that how I came to be?” Brad had lots of questions.

His mom explained that back when Jackie Kennedy’s bouffant reigned supreme, women across the country looked to imitate it and read that the style icon’s hairdresser rinsed her hair with beer.

For extra body and style, it was a great home treatment. But somewhere down the line, after one too many sniffs of our sister’s hairspray from the backseat of the car, most of us forgot all about it.

To the Pearsalls, our reliance on chemical-laden beauty products is concerning.

“As Americans, it’s our birthright to have lather, shine, and all that, but we use yucky chemicals to get it,” Brad says. “We all kind of turn the ingredient list to the corner of the shower in shame.”

That’s when they really got to thinking: If Budweiser was the hairdo brew of choice in the 1960s, perhaps craft brew could be even better.

“I started getting every craft beer I could find. I literally went to the shower and started pouring it on my hair,” Sarah says. “It’s cold, and it’s smelly, but when you rinse it off and get out of the shower, your hair is so soft and conditioned. I couldn’t believe it.”

They first tried brewing beer specially made for hair in their own home, but well…

“It was not an epic ale, it was an epic fail,” quips Brad, who is never one to shy away from rhymes and puns.

Then they headed over to Asheville’s oldest brewery, Highland Brewing Company, with nothing but a PowerPoint presentation and a big idea. Everyone fell out of their chairs at the idea of using premium beer for anything other than drinking.

“After they quit laughing, they said, ‘All right, you guys sound serious. Here’s some beer,’” Brad says.

But the Pearsalls were just a couple of lawyers. They’d need help from a chemist to get the formula of BRÖÖ right, so they recruited a friend who is a doctor and rented some laboratory space.

Again, it was a disaster. To create natural shampoo and conditioner that actually smelled good, it would mean finding someone with actual salon experience. They caught wind of a Christmas party the Carolina Society of Cosmetic Chemists was throwing, and they saw an in.

“So I said, ‘You know what? I’m going to put on a coat and tie, and I’m going to go crash that party and see if I can find somebody who could help us,’” Brad says.

He found their guy.

For BRÖÖ to be sold by various eco-minded stores, such as Whole Foods and Earth Fare,  the products must follow certain ingredient guidelines, which ban hundreds of chemicals.

Brad says it took almost two years and more than 53 versions of the shampoo and conditioner to make BRÖÖ just right before it hit shelves in 2011.

There were lots of tangles in the plan, but to the Pearsalls, all were worth unsnarling if it meant creating a product that makes them proud, and one that their family can use.

Even their teenage daughter, who will only use a shampoo if it smells good, likes it. And she’s not the only one. Brad and Sarah say it is not unusual for them to get emotional testimonials from people who use their product.

There’s the woman who didn’t date for two years, and after using BRÖÖ, she says both her hair and new beau are great. And there’s another who said she cried in the shower when she could actually get her hair to lather after years of using no-frills hypoallergenic products.

After all, everyone gets bad hair days.

“You don’t necessarily have a bad shirt day, you know what I mean?” Brad says.

BRÖÖ offers three formulas of shampoo and conditioner, each featuring a different type of beer.

Made with Highland’s oatmeal porter, the hydrating formula soothes and restores and has a subtle vanilla smell. The pale ale found in the volumizing formula gives flat hair a boost and features citrusy notes, and additional hops in the IPA shampoo and conditioner smoothes frizzy hair.

While the nourishment BRÖÖ provides might be serious, the brand itself is anything but.

The BRÖÖ philosophy is an easy one to follow: “Keep it healthy. Make it simple. Look awesome. Love what you got.”