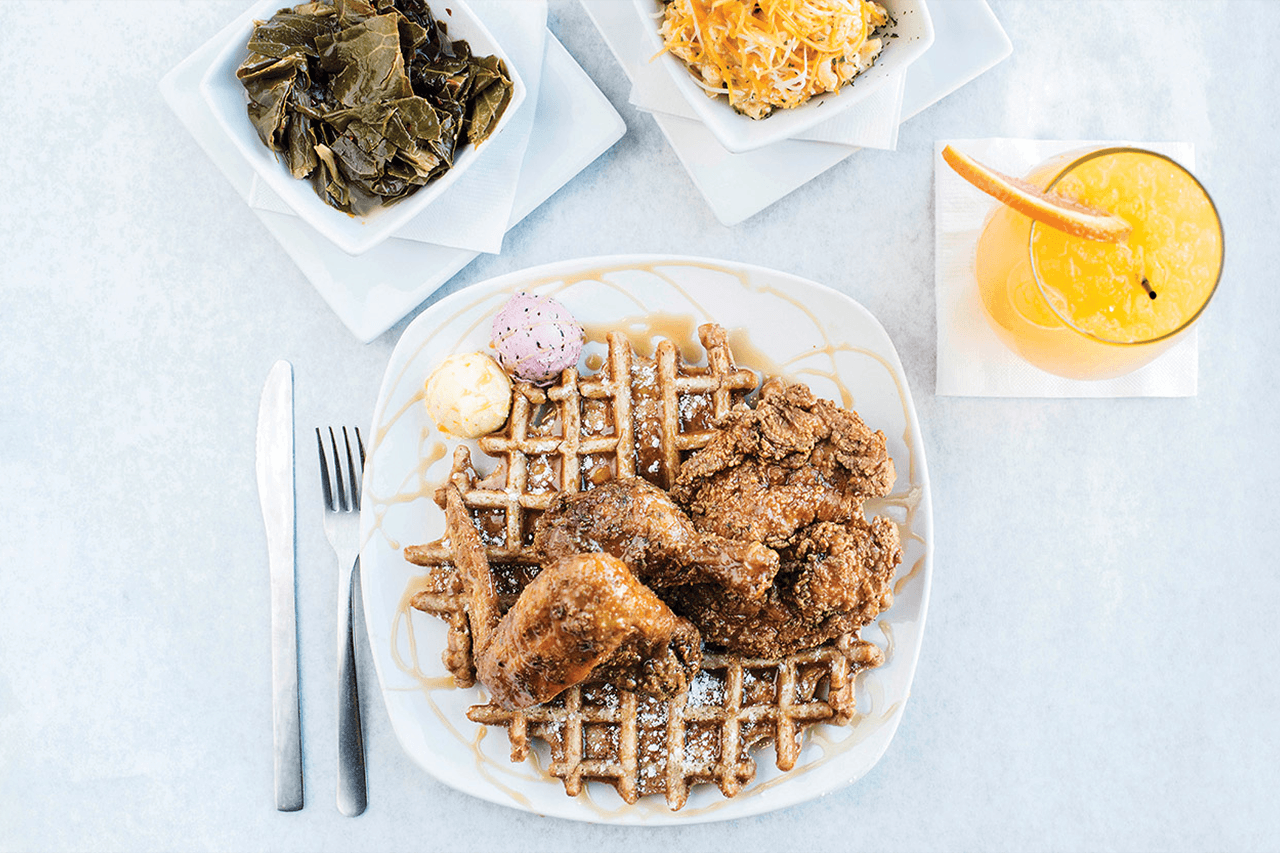 It’s the backbone of any Southern brunch. Buttery, flaky biscuits dutifully barricade the rim of a weighed-down plate, ready to protect all that’s piled high and holy from spilling over. Most irresistible when smothered with thick gravy, biscuits double as an excellent morsel-delivery device, sopping up every last bit of leftover grits, grease, or syrup. Amen.

Huge in both size and flavor at the no-nonsense Smith Street Diner, the biscuits are show-stopping and nearly the size of your plate. If you’re not a fan of gravy, you can either reevaluate your life choices or try topping your biscuit with the diner’s homemade apple butter.

Gravy isn’t just gravy at Biscuit Head with the restaurant’s inventive flavors like sweet potato coconut and smoked tomato creole complementing standby favorites like espresso red eye and fried chicken gravy. You can even order a gravy flight: your choice of three gravies to try with your biscuit.

Down-home comfort is what you’ll find at this celebrated Wilson eatery. Occupying what was once a gas station, Flo’s Kitchen has limited seating but makes up for it with its buttery cathead biscuits with bubbly cheese.

Chicken and waffles is the indecisive eater’s answer to deciding what’s for brunch. No tormenting yourself with the question of “sweet or savory?” because you can have both with this dish.

Dame’s dishes are decadent, right down to the butter. Try the restaurant’s schmears, whipped sweet cream butter with infused flavors like maple pecan and chocolate almond. All it takes is a couple of bites to see why these chicken and waffles are “Almost! World Famous.”

The chicken and waffles at Beasley’s feature an artful balance of flavor combinations. The crisp, fried skin and succulent meat of the chicken pair well with the fluffy waffle and light drizzling of honey. And you would be remiss if you didn’t try at least one of the restaurant’s new Southern takes on classic side items.

At King Daddy’s, you’ve got your options. Chicken comes fried, grilled, tossed in a ginger soy sauce, or dipped in a habanero sweet potato sauce. The list goes on, and that’s not even touching on potential waffle styles and toppings.

French toast is only as good as the bread that it’s made with: The thicker, the better, and it’s most certainly baked in-house.

Baker’s Kitchen doesn’t joke around about its French toast, touting it as being the town’s “BEST.” (All caps warranted.) And while freshly made bread is important, the restaurant’s homemade butter syrup is unforgettable.

La Farm Bakery knows its bread. It’s got to, considering its owner was raised in Paris, where baguettes are practically a food group. The restaurant’s crème brûlée French toast is baked on cinnamon brioche and served with Amish maple syrup.

Melanie’s classically prepared French toast is great, but opt for the version stuffed with a raspberry cream cheese spread and fresh fruit. Brunch is the meal of indulgence, after all, and you can rationalize your decadent choice with the feel-good knowledge that the eggs and bread are sourced from within the county.

Eggs Benedict gets its reputation as being the most refined brunch dish, but here in the South, it takes on new life as comfort food.

A heaping pile of spicy collards in Mozelle’s version of a Benedict perfectly complements the dish’s candied bacon, and the brioche bun is so soft, it can be cut easily with one swift motion of a fork.

Get your eggs Benedict fill in the form of a crepe, a specialty of City Lights Café. It includes scrambled eggs, ham, Swiss cheese, and hollandaise sauce. After your meal, take time to wander around the quaint bookshop upstairs.

Eggs Benedict gets a coastal twist at Fish Bites with the restaurant’s crab cake Benedict. Get yours with a side of pepper jack grits.

With the addition of bacon, mushrooms, and scallions, shrimp and grits at Crook’s Corner has garnered a bit of national fanfare and is considered the standard bearer.

The dish’s roasted red peppers provide a subtle sweetness that pairs well with the sharpness of the Asiago cheese grits. Don’t forget to wash it down with a mimosa.

The shrimp and grits are so good at Tupelo Honey Café, it’ll have you saying “shoo mercy.” The goat cheese grits are topped with a spicy roasted red pepper sauce, and you can opt for additional ingredients, including spinach, bacon, and chorizo.