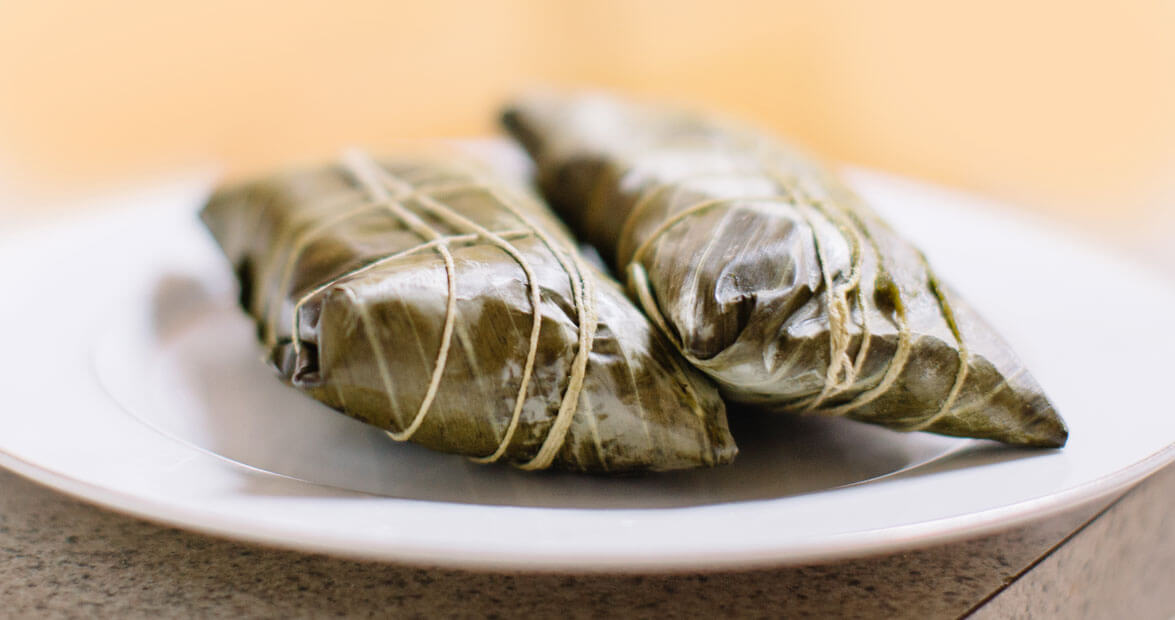 The Méndez family’s first Christmas in America seemed a little quiet to their youngest daughter, Michell. She was 14 when the family left Venezuela in October three years ago to set up a new life in the United States. “I thought it was a little less exciting,” she remembers now. “Here, it was quiet. I didn’t see a lot of life in the houses.”

Michell didn’t start to feel better until the whole family — her parents, Domingo and Milanyela; her older brother and sister, Óscar and Karolay; and Karolay’s husband — gathered in the kitchen and started cooking. “It helped, getting together. The smells reminded me of Venezuela, and that reminded me that I’m not alone here.”

In America, we think we make such a big deal about Christmas. The weeks of buildup start so early that angels elbow Halloween decorations on store shelves. Then the big day arrives, the presents are ripped open, and … that’s it. Naked trees hit the curb before Santa’s sleigh tracks have faded. That’s not how they do it in Latin America. In Venezuela, Christmas — actual Christmas, plus the partying, feasting, and feting — goes on for nine days, from December 16th through the 25th, with Mass every morning until Christmas Eve, and the big dinner after midnight Mass, for Navidad. Even then, it’s not over: There’s still the big party on January 6th, Día de los Reyes — Three Kings’ Day.

It takes a lot of food to get through a holiday like that.

In Charlotte, the Méndez family keeps Venezuelan Christmas alive by making all that food, especially hallacas (pronounced “ah-YA-kas”), or Venezuelan tamales. “It’s tradition,” Michell explains. “Your family comes, you listen to Christmas music, you feast. Everybody brings something.” 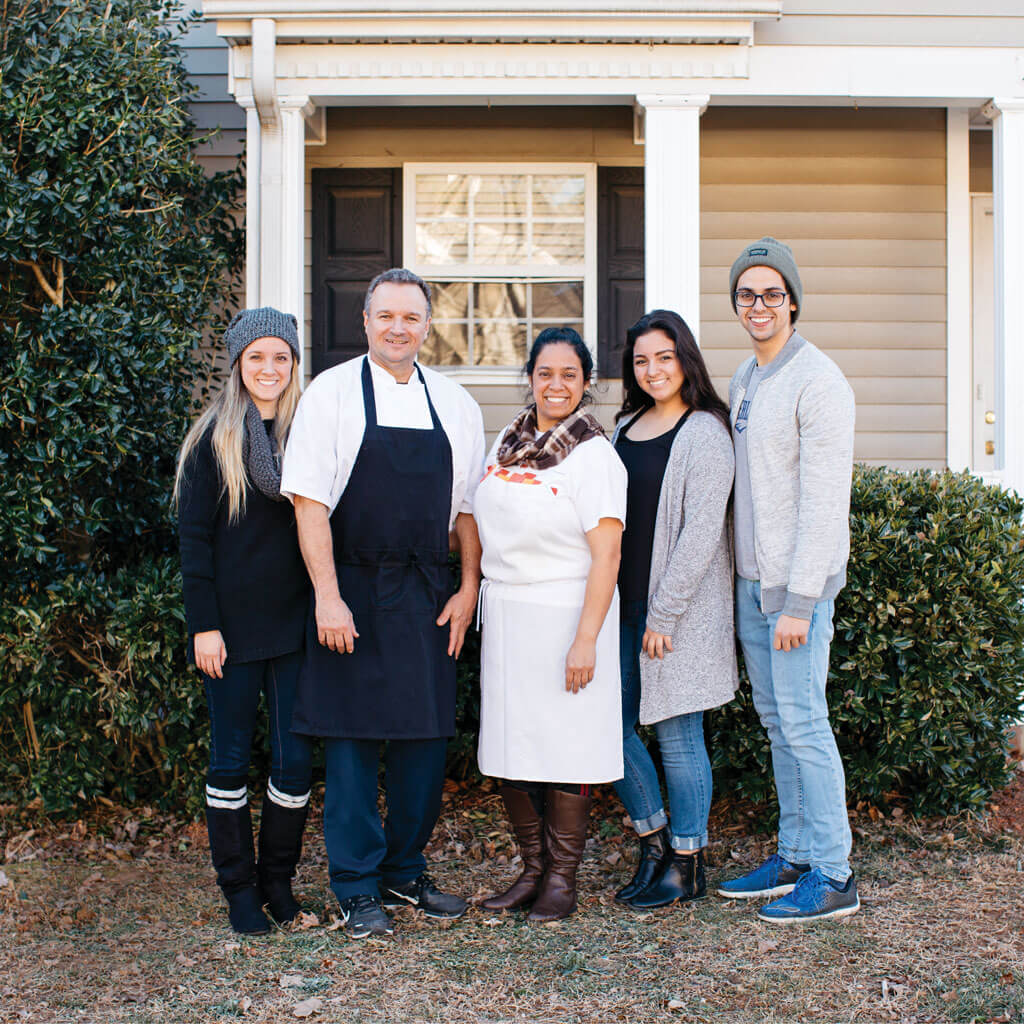 Domingo Méndez, 50, is a baker who had his own business in Venezuela. But the economy there has been gutted; the inflation rate reached 1 million percent recently. Their hometown, San Cristóbal, was once prosperous, but it’s been torn apart by violent protests. Three years ago, the Méndez family decided it was time to get out and find a better life for their kids.

“The situation in Venezuela is very hard,” Michell says, translating for her parents. “It’s hard to make the company grow. We wanted to find a new chance here.” Their oldest daughter, Karolay, was going to a university, where she met a young man from Colombia whose family had already immigrated to North Carolina. When they married, her family followed, settling in a small neighborhood on the outskirts of Charlotte. It was tough for Michell, who couldn’t speak English when they arrived. On the first day of school, she came home crying. She adjusted quickly, though: In only a couple of years, she has become fluent in English. “Now, I realize it was a good choice,” she admits.

Meanwhile, her father set about making a living with his culinary training. Calling his business Mister Sunday — Domingo means Sunday — he hopes to eventually start his own restaurant. But for now, he uses the kitchen in Inspira Church, which serves Charlotte’s Spanish-speaking community, to make food for his catering business.

His specialty is golfeados, a pinwheel pastry made from a buttery, sweet dough that looks a little like a cinnamon bun, with a filling of anise seed, cinnamon, raw sugar, and a semi-hard white cheese that he orders from Miami. After the rolls are baked, they’re soaked in a syrup made from papelon — similar to brown sugar — topped with a slice of the salty white cheese, and warmed before serving. Like a lot of Latin American pastries, the combination is sweet and salty at the same time.

Making hallacas, however, is usually a family affair, with everyone gathering to share the work. Domingo and Milanyela both learned from their own families, their mothers and grandmothers. “Moms and moms,” Michell explains. She learns from her mother. The recipe takes two days, starting with a savory, complex stew. Milanyela lists the ingredients as Michell translates, pulling out her smartphone to figure out how to explain it: It’s usually chicken, beef, pork, raisins, olives, pimentos, and garbanzo beans, all simmered with tomatoes, grated papelon, and broth, sometimes colored dark red with annatto.

On the first day, you make the stew and chill it, so the flavors can blend. On the second day, you make a masa dough, similar to cornmeal, then press it out and wrap it around the filling. Finally, you wrap each tamale with a plantain or banana leaf and tie it neatly into a bundle before the hallacas are steamed for four hours.

Every family does it a little differently. In the Méndez family, Milanyela is fanatical about tying the bundles. “My mom is very careful,” Michell says. “She cares about how it looks. She lines them up with the same amount of space in between.”

Usually, the Méndezes will make 50 hallacas, serving them with Milanyela’s special puncho crema, a sort of eggnog that’s flavored with cinnamon and rum, and with special dishes like pernil — slow-roasted pork — and pan de jamón, a yeast bread filled with smoked ham, raisins, bacon, olives, and capers, sort of like a stromboli. “We have a lot of friends,” Michell says with a big smile. “They love it. People come and eat until the last hallaca.” 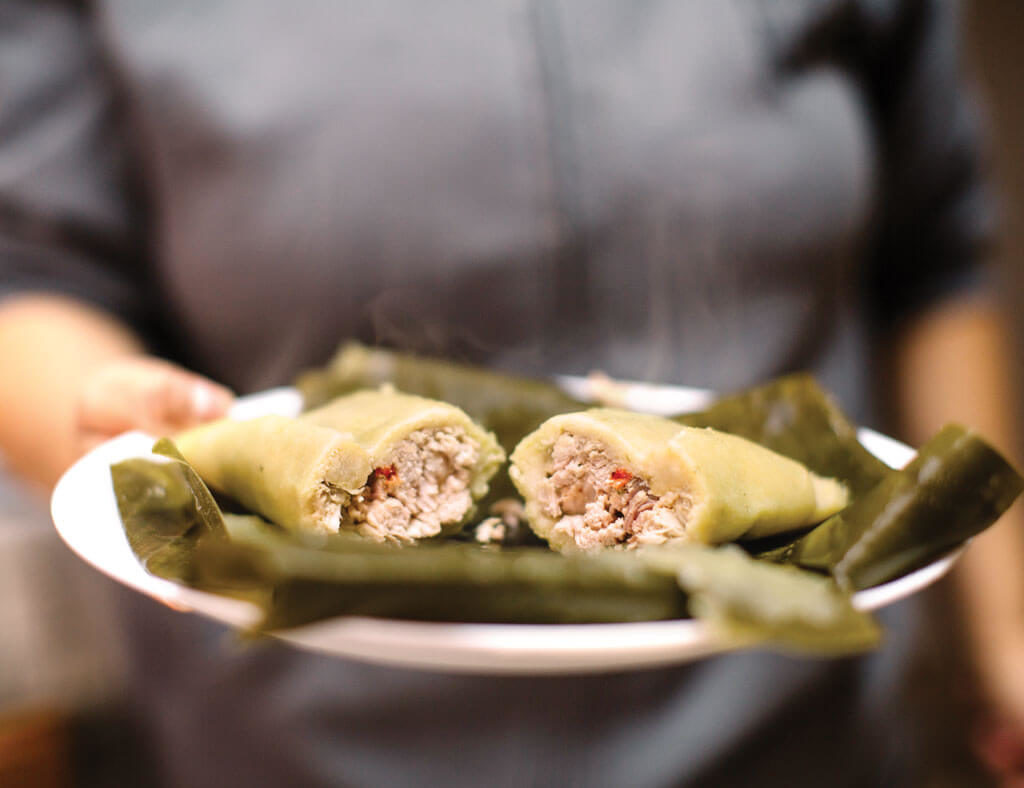 Venezuelan tamales are different from Mexican tamales, Milanyela says, carefully picking out the unfamiliar English words: “We don’t use spicy. Mexican is spicy.” The Venezuelan-style filling is a little sweet and very rich. For Michell, making and eating hallacas at Christmas reminds her of home. The family has political refugee status, so it will be six years before they can go back, even for a visit.

As much as Michell loves her family’s food, she doesn’t want to be a chef like her father. She loves to cook, she says, but as a hobby — and a way to carry on family traditions. Her father is set on teaching her every specialty he thinks she should know. “Tienes que cocinar para tu esposo,” he tells her, meaning: “You’ve got to cook for your husband.” (Well, not if a future husband can cook as well as her father.)

Michell rolls her eyes: A teenager’s a teenager, no matter the culture or nationality. “He tells me that every day,” she says, laughing. “‘Twenty plates you have to learn before you marry!’” That might be enough to get her through a Venezuelan Christmas.