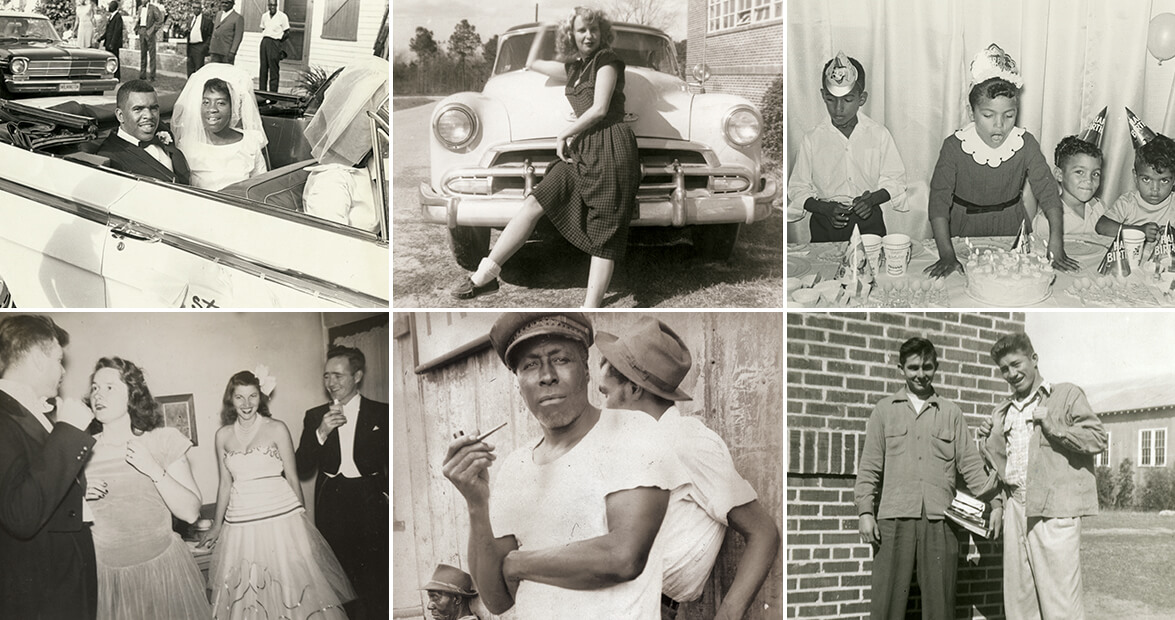 The moments are both ordinary and special: a half-dozen African-American boys, most about 9 or 10 years old, wearing jeans, hand-lining for crabs off a dilapidated wharf; a white, teenage girl in a jumper and bobby socks, posing campily against the grille of a shiny white car; a black couple dancing cheek to cheek, the man wearing a white dinner jacket, and the woman, a white lacy gown; five white nursing students in pajamas piled on a dorm room bed, all smiling and laughing.

Weddings and sorority meetings, front porches and backyards, kids’ birthday parties and grown-ups’ New Year’s Eve bashes; overalls and tuxes and Easter hats and Sunday dresses; indoors in living rooms and kitchens, and outdoors on the street, along the waterfront, at the beach. Stevedores, soldiers, mothers, high schoolers, troops of boisterous kids. Ordinary people going about their daily lives. This is Wilmington back in the 1940s and ’50s, portrayed through an exhibit called “Reflections in Black and White” at the Cape Fear Museum. 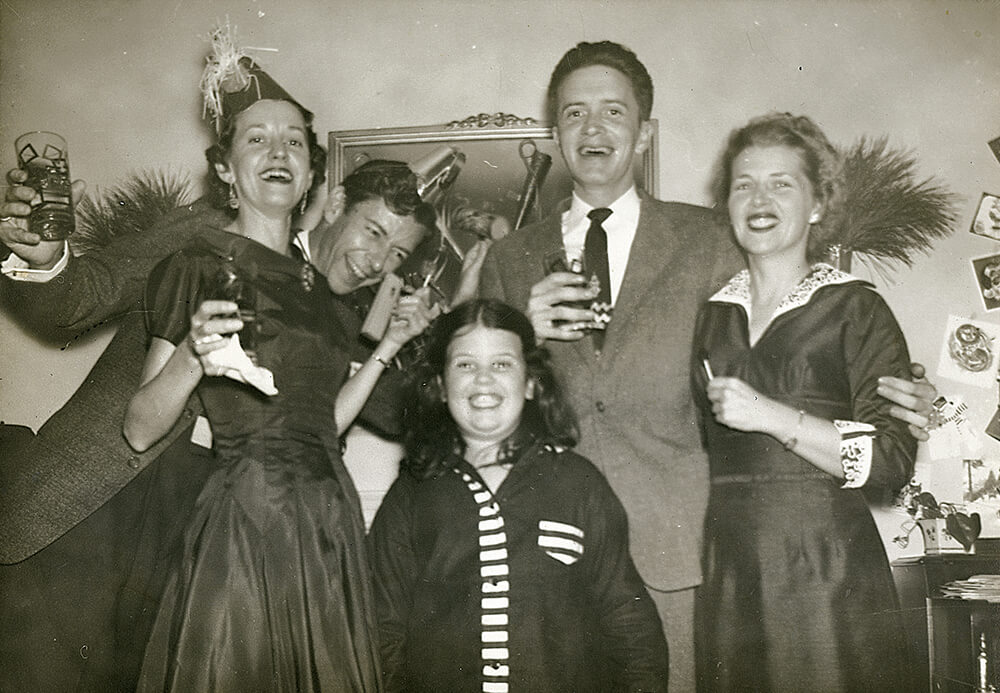 The exhibit is beguiling — a gallery of faces showing laughter and pride, resignation and surprise, happiness and chagrin. Their deep character is forever frozen in the tilt of a chin, the self-confident stare, the shy glance, the startled look of someone caught unawares in a candid moment.

The photos show blacks and whites living in parallel but separate universes. It’s not just that they don’t appear together in the posed photos — the wedding receptions, the birthday parties, are all-black or all-white. It’s that they aren’t even accidentally caught in the background of each other’s outdoor photos. It’s as if they are actually invisible to one another’s cameras, as if each race is using a special film that captures only people of their own color. 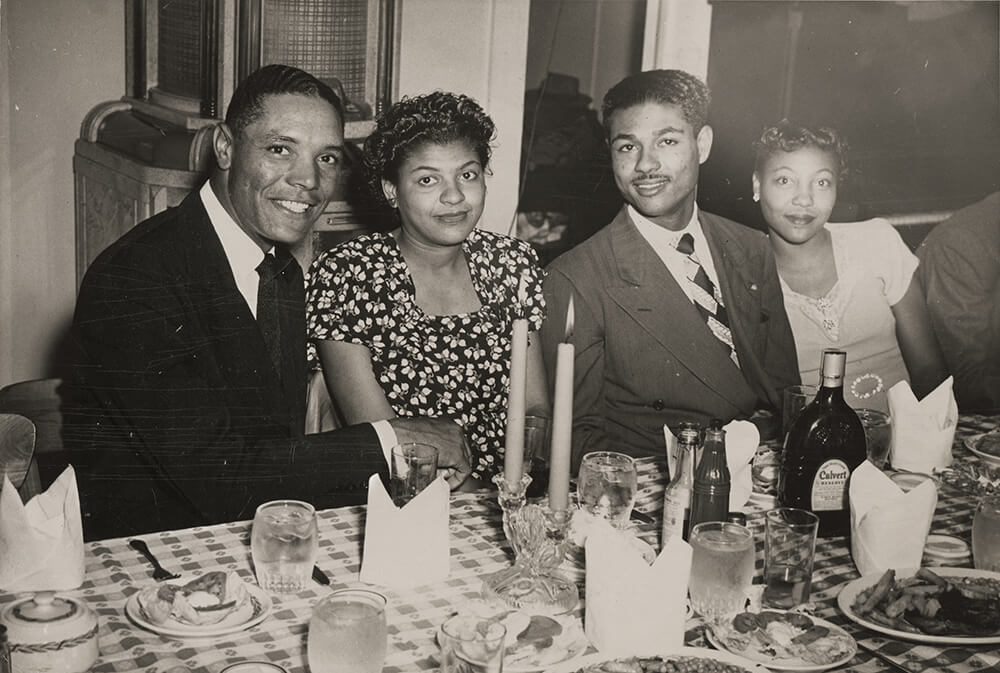 A common theme runs through the exhibit: The photos show people of both races doing the same things, although never in the same places. photograph by Cape Fear Museum of History and Science, Wilmington, NC

It’s a stark revelation that powerfully and graphically shows us that in the days of segregation, people could inhabit the same small town, the same crowded county, and yet remain absent in each other’s visual memories.

A gallery of faces showing laughter and pride, resignation and surprise, happiness and chagrin.

The photos have been collected from four sources, including, most notably, the late Claude Howell, for decades Wilmington’s most beloved painter, and a celebrated bon vivant. In his photos, Howell is clearly studying his subjects, and the photos became the basis for his later paintings. He catches a black longshoreman in a moment of relaxation, a small pipe clenched in his big right hand, his left arm tucked across his white T-shirt. We wonder: Does this man know who Claude Howell is and why he is taking his photograph? Has he been asked permission? Does he find it strange that in this time and place, a young white man with smooth hands should be loitering on the waterfront?

“I spend the entire summer drawing the coast of North Carolina and begin with the waterfront at home,” reads part of the caption under several scrapbooked images, including a group photo of men waiting outside a barbershop. In his sketches and paintings, often done in luminous pastels, Howell invests these African-American men with an essential dignity. It is clear that he had a kind of fascinated respect for those who worked with their hands — fishing, unloading cargo, handling tools, and running machines. Still, though, the black and white remain separate.

It is this separation that Wilmington has struggled against for all of its history: slavery, forced segregation by law, and now the unforced self-segregation that too often remains with the stubbornness of long habit. In the antebellum era, slaves were traded on Market Street near the Cape Fear River, while many free blacks worked as skilled laborers at river plantations like Orton, Clarendon, and Grovely. Draconian laws punished their smallest infractions. 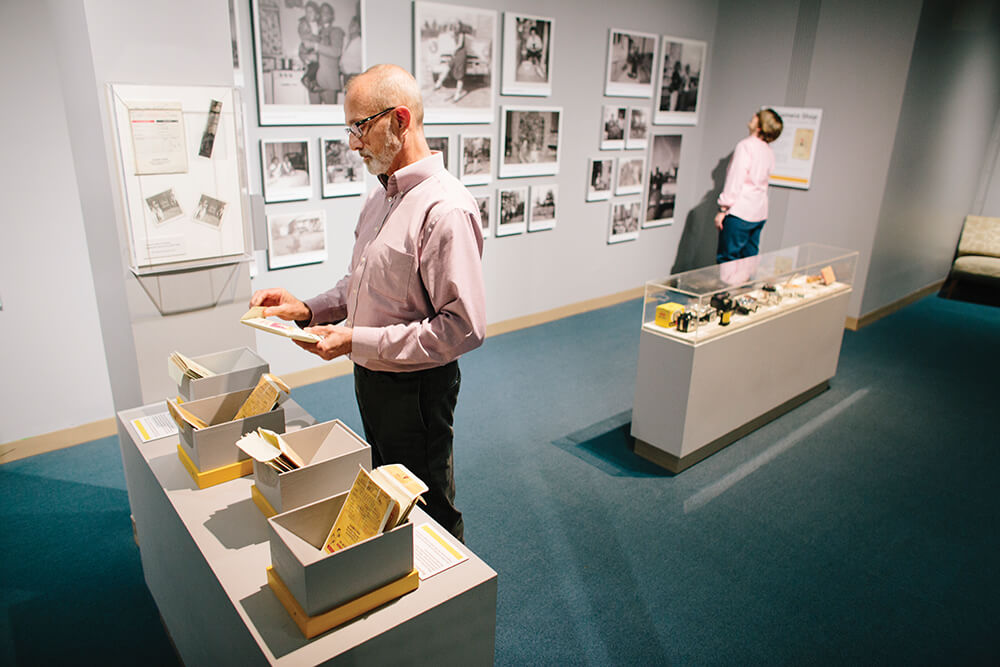 Thousands of black-and-white images are on display at the Cape Fear Museum. photograph by Millie Holloman Photography

After the Civil War, the plan for Reconstruction quickly gave way to state ordinances forbidding blacks from voting, serving on juries, testifying against whites, owning firearms, and a host of other activities. In 1898, white supremacists torched a black newspaper after “Redeemer” Democrats won the election in Wilmington, and the ensuing riots left scores of black citizens dead.

Nearly a century later, racial violence came to Wilmington again in the wake of a desegregation order. In 1971, nine black men and one white woman were convicted of arson attacks on whites, and sentenced to a combined total of 280 years in prison on the false testimony of witnesses who later recanted. The Wilmington Ten, as they came to be known, were freed in 1980 and officially pardoned in 2012.

So the past is not quite as past as we would wish.

It’s not useful to be too smug about this whole complicated matter of racial segregation. We still haven’t figured it out. We still have communities too often living in parallel universes, invisible to each other.

A signboard at the entrance to the exhibit asks us to examine the past. “What do you see?” it reads. “Similarities or separation?” The old photos show people doing all the things we do now, it tells us. “At the same time, they document life in the racially segregated South.”

On this day, a gaggle of little kids on a field trip, kindergartners or first graders by their looks, have come to the museum for a lesson in weather. They obediently form a line behind their adult chaperones, then quietly file inside. I hope someone among them takes a lot of pictures — selfies with pals and group shots — because kids and adults alike are both black and white, and in the sunshine of this Southern city, they see each other quite clearly.

Where They Came From

The exhibit’s photos were culled from four very different sources.

Herbert Elijah Howard • A letter carrier by profession who worked out of a home studio, Howard documented the lives of the African-American community for decades. Some photos are formal and expertly posed; others capture daily life.

Elizabeth Ashworth • A nursing student at the whites-only James Walker Memorial Hospital School of Nursing in the 1940s, Ashworth kept scrapbooks full of her amateur snapshots. They capture spontaneous moments of friendship, and household high jinks with her fellow nurses.

The Camera Shop • The store was a longtime fixture at the corner of Front and Grace streets near the old Atlantic Coast Line Railroad depot.

Claude Howell • The famed artist meticulously cataloged and captioned his photos in hundreds of three-ring binders; he then used the photos as subjects for his paintings.