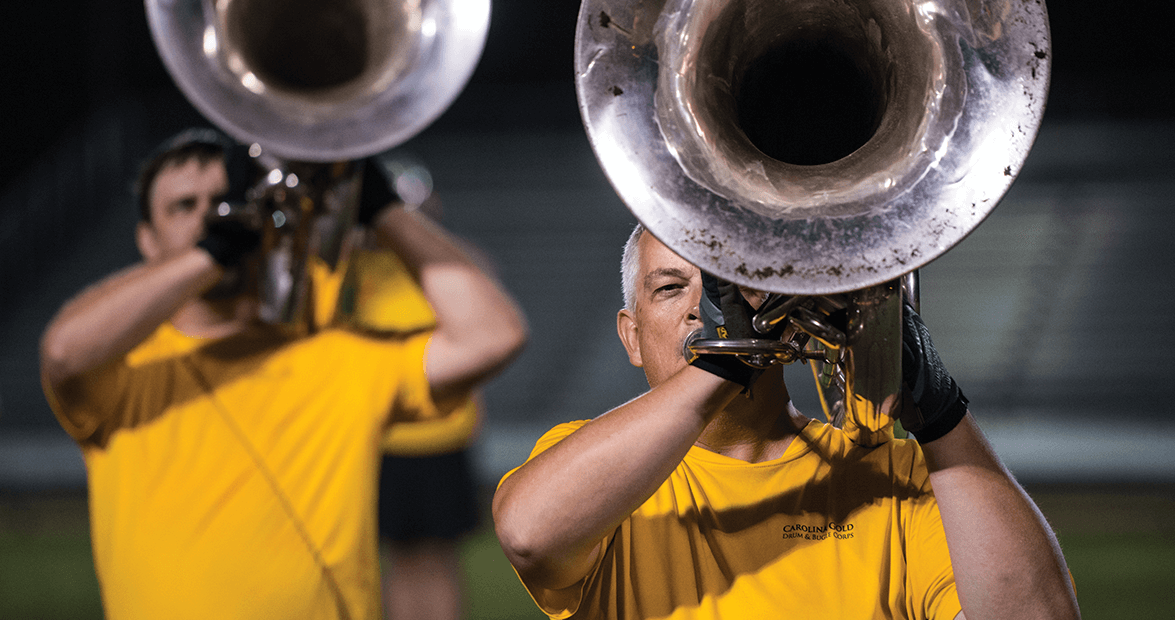 After finishing work that Friday, following a long day of processing paperwork, Joe Allen packs his pickup, gets dinner at a drive-through, and heads southwest on the highway, chasing the sun.

During the hour-long drive from Smithfield to Fayetteville, he never turns on the radio. He has to hear the music marching through his mind.

He knows the whole score, all five movements of the new show, every instrument. But he concentrates on the low notes, the bottom that holds everything up. His part.

The sky is golden by the time Joe gets to Cape Fear High School. Slivers of bruised clouds stripe the horizon. Joe climbs out of his truck, stretches, drapes his uniform over his arm, and grabs his duffel — and his tuba.

Most of his bandmates are already in the gym, blowing up air mattresses, warming up their instruments. He can hear the baritones running scales. He follows the sound, and finds an empty spot at the edge of the basketball court, near the other “old guys.”

Every summer weekend for the past 14 years, Joe has driven to some high school, spread out his sleeping bag, and spent 15-hour days marching with Carolina Gold. 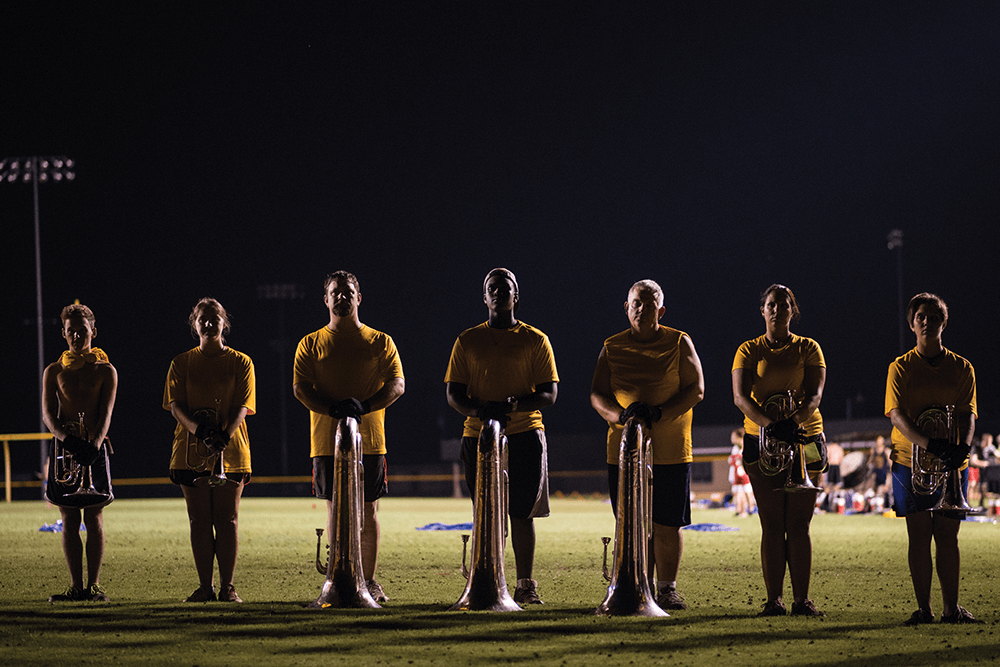 This year, for the first time in a decade, the band is hosting a competition. Three other bands are coming in from other states to play at Cape Fear High.

That means, for the first time, Carolina Gold’s members will be performing close enough to home that their families can come cheer — parents and grandparents, wives and children.

Unlike most drum corps, where members age out at 21, Carolina Gold has no upper age limit. Current members range in age from 15 to 52 years old. High school students and college professors, electrical engineers and textile workers, kids who hope to join a professional drum corps, middle-aged performers who have gotten too old.

Joe is 49. His gray hair is cropped close. He helped form the band, and he’s the only original musician who’s still marching. Every season, he swears, will be his last.

“OK, grab your water bottles and your instruments. Let’s head to the field,” Jordan Webb, the corps director, calls just before 9 p.m. “We’ve got to make a few choreography changes to the third section, then I want to run the whole show. We’ve only got a few hours left tonight.”

It’s dark by now. Joe follows his bandmates out the back door, into the sticky night, across a long parking lot, over the track, and onto the grass. He shoulders his tuba. Field lights glint off the silver bell.

The director raises both arms, lets the silence linger, then brings down her baton.

Joe found his first love when he was 10, in the back of his elementary school band room: a battered Bundy trumpet with a new mouthpiece. He adored its brassy sound, how you could hear it over all the other instruments, the fact that trumpet players got most of the solos — and the girls.

He practiced every day until his lips went numb.

In high school, the music got so much more complex, the sound so much bigger. And there was movement. Joe enjoyed the new challenges of marching backward and sideways, keeping in sync with the other players, forming shapes and figures, human ribbons threading across the football field.

His band director pushed him to apply to East Carolina University, to major in music. But Joe worried he wouldn’t be able to make a living.

He studied computer programming and data processing, joined the Air Force, and became a crew chief for F-16 fighter jets. For a few months, he played with a military drum-and-bugle corps, marching at ceremonies. But he kept moving around the world, and had to put away his horn.

When he left the military, he moved to Wilmington and managed a restaurant. He got married, had a daughter, bought a house — and dusted off his old horn.

“I never wanted to be in some symphony, sitting down inside a theater,” Joe says. “I always enjoyed marching as much as the music, the whole idea of being part of a show.” He knew that, at 36, he was too old to join a Drum Corps International band. He Googled “marching drum corps” and found a post from someone in Raleigh who was looking up the same thing.

Six months later, Joe got an email. Did he want to get together with some other musicians to form a band?

A dozen people came to that first meeting in Creedmoor in January 2001. Some brought drums and bugles. Joe brought his horn. They played for three hours — “the original baker’s dozen” — and created Carolina Gold.

“My wife didn’t really get it, why I wanted to do this every weekend, all the time and expense,” Joe says. He got tired of trying to explain. He got divorced. His daughter joined the band while she was in high school and traveled with him one summer. But when she started waiting tables at Cracker Barrel, she left Carolina Gold. And he was left alone.

He never imagined that, at almost 50 years old, he would still be hauling a 35-pound tuba across the East Coast, sweating in 100-degree heat, paying $1,300 in dues to march with musicians younger than his daughter.

“I can’t keep doing this,” Joe admits. His ankles ache. His back seizes up. He spent $8,000 at his chiropractor. “I tried to quit last year, but after a month, I couldn’t stay away.”

In 2010, when Joe’s dad died, he moved in with his elderly mother, into her century-old house in the center of a soybean farm in Smithfield. Joe works with his brother now, selling commercial wells, installing pumps. Evenings, he cooks dinner for his mother, then does dishes while she watches “Jeopardy!”

“Life outside of drum corps? There’s not really much else,” Joe says. “I update the corps’ website, study other bands on YouTube, memorize the drills.”

Every night at 8 p.m., after his mother goes to bed, he hauls out his tuba. He doesn’t want to wake her, so he can’t practice in the house. Instead, he carries the instrument outside, hikes off the porch and into the field of beans, and blows his bass notes beneath the stars.

The fluorescent lights in the gym keep flickering on, at least 10 times between midnight, when Joe zipped his sleeping bag, and 6 a.m. Saturday, when someone’s cell phone starts ringing. Joe groans, sits up, and picks his way between his bandmates’ makeshift beds.

The sweltering room smells like sweat and spit. Volunteers, mostly band members’ parents, hand out cups of yogurt and granola. Then the director orders everyone outside to stretch. It’s only 8 a.m., but it’s already 87 degrees. By the time everyone takes their places on the field, Joe’s T-shirt is soaked. 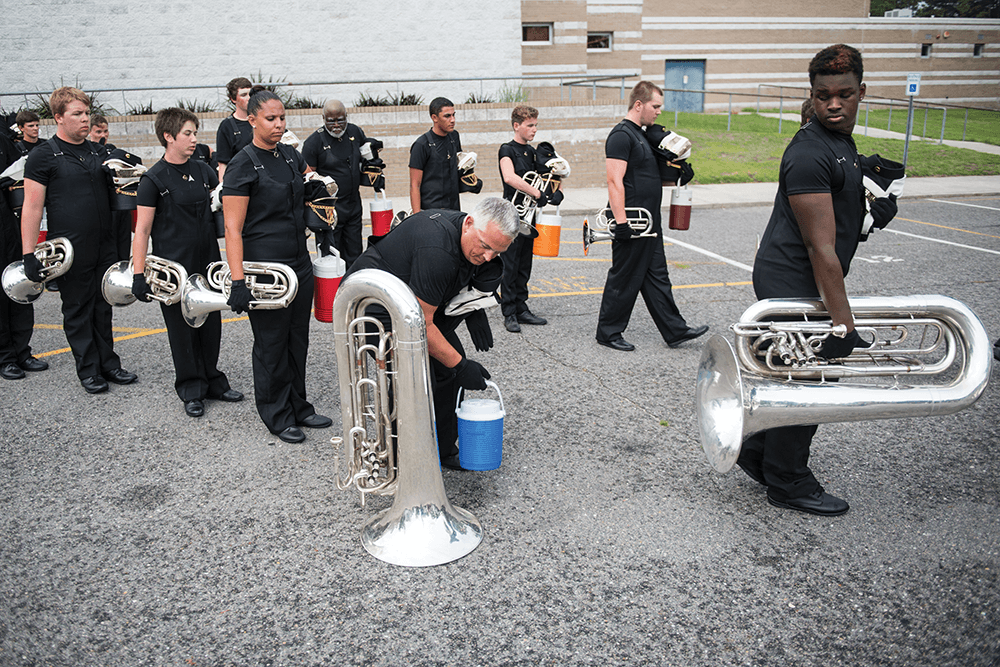 Practice makes perfect, and wins competitions. At Cape Fear High School, musicians in Carolina Gold’s brass section head to the field with horns in one hand and water jugs in the other, drum major Kennith Watts Jr. leads a mid-afternoon rehearsal, and the day ends with more practice. photograph by Andrew Craft

“Now, we’ve always wanted to host a competition. We’ve already sold 200 tickets and hope to double that by tonight,” says Larry Harper Jr., the executive director. “I know we’re all excited to get to finally perform in front of friends and family.”

One man’s wife and daughter are driving in from the coast to see him. A boy’s parents, big sister, and girlfriend promised to come. Joe’s mother has only seen him march once, when the band started. He hopes his brother will bring her tonight, so she will see how much better the band has become.

“OK, let’s get going,” says Webb, the corps director. “We’ll start at the second section. Set!” The brass players raise their horns; the drummers lift their sticks. Joe kisses his tuba, sounding throbbing tones: the heartbeat of the band.

“One, two, three, four — down six, seven, eight.” Directors call instructions while beating a wood block. Band members weave intricate patterns while playing classical music. If they miss a step, or a measure, they drop and do push-ups.

The show changes each season. This year’s theme is “The Darkest Hour,” the story of a graveyard between dusk and dawn, complete with 36 wooden tombstones representing former DCA bands.

After five hours, changing the third movement, draining their Thermoses, and peeling off most of their clothes, the band breaks for lunch. Joe rolls up the sleeves of his white T-shirt and limps off to join the other old guys at the back of the lunch line.

He picks at the spaghetti some volunteers have made, downs a Gatorade, and heads into the air-conditioning. The gym is still hot, but it’s better than baking in the sun. As soon as Joe collapses, it seems, the director is ordering them all up to button on their gold-breasted jackets and get back outside for the competition. A storm has blown in. The show has to go on.

They warm up in a grove of pines, rain ringing off their horns, and suck lemons to improve their pucker as they file onto the field. Joe knows he shouldn’t be nervous, not after 14 years and more than 50 shows. But as he pulls on his black hat, his stomach clenches.

The drummers’ cadences are snappy, the first trumpet nails her solo, the color-guard members don’t drop a single saber. Joe backs into a tombstone, but he never misses a beat. And as Danny Elfman’s theme from the film Sleepy Hollow crescendos over the stadium, 400 people stand, their applause drowning out the ending.

Some band members say that’s why they perform: for the audience’s approval, the adrenaline rush of the crowd. Joe just knows the band allows him to make music he couldn’t create on his own, to be a part of something bigger than himself, to feel what we all want to feel: that he matters. The corps connects him with people who share his passion. People who never ask why — because they know.

Joe lets the corps consume him because the band links him to who he was, and who he hopes he still is. He is no longer a husband, a military crew chief, or a computer programmer. Ask him who he is, and he laughs, “I’m a horn player.” 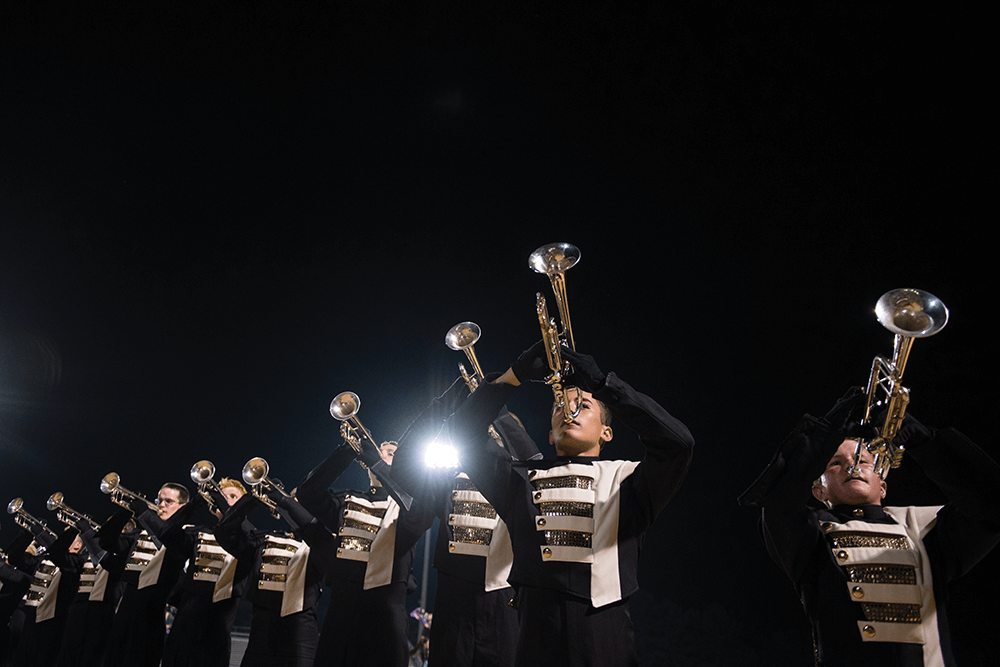 After the judges tally the scores, after Carolina Gold wins and marches back into the stadium for an encore, after another standing ovation, band members climb into the stands. A brass player lifts his young daughter into his arms. A percussionist kisses his girlfriend.

Joe shades his eyes with his hand, scanning the faces. But his brother and mother aren’t there. He’s dragging his tuba back to the gym when a woman shouts, “Joe! Hey, Joe!”

“So glad we found you!” her husband says, running up with outstretched arms. They had been a part of the “Old Gold.” They drove halfway across the state to see the show — and their old friend.

In the shadows of the stadium, in a quiet corner behind the bleachers, Joe finally finds his family.