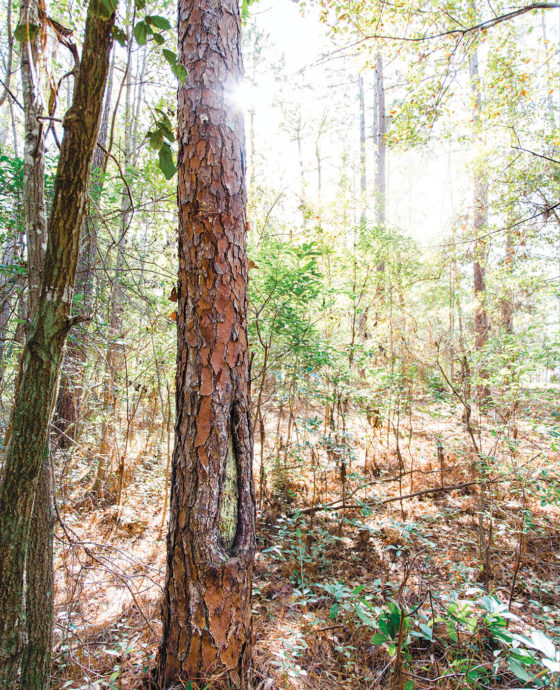 You’d better walk fast if you’re going to keep up with Ricky Kelly. Walk fast and listen hard, because if there’s one thing Kelly does faster than walk, it’s talk. The man talks a blue streak. Or a green streak, because most of his talking takes place in the pinewoods of Pender County, where, right now, he’s walking fast and I’m listening hard, trying to keep up with both my feet and my ears. 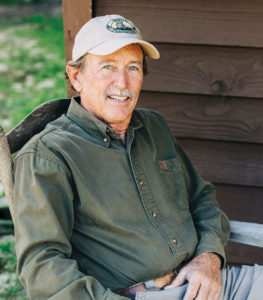 We’ve turned off a sandy farm road and are walking along a stretch of pines, the trunks blackened from prescribed fires. Kelly is groundskeeper, dog trainer, huntmaster, and forest boss for Genteel Plantation, a retreat owned by businessman Bobby Harrelson. Kelly tells me about his grandfather, who lived nearby in the long-gone Point Caswell community, where the steamboats would sound their whistles when they were a mile downriver to give folks time to get to the landing. He talks about quail dogs and shark fishing and the cypresses down by Moores Creek that three men couldn’t circle with their arms. He points out the longleaf saplings shooting up out of the sunny undergrowth like bright green bottle rockets. And when I lag behind, he slows down so I can catch up. With both my feet and my ears, because he knows I don’t want to miss a thing.

“There it is,” Kelly says, nodding toward a thicket of pine trees, shrubs, and vines. I follow his gaze to a broad longleaf. From about knee-high to head-high, an oval of bark is missing from the trunk, the cambium slashed with deep gouges. From a distance, those grooves do, indeed, look like whiskers.

I’ve seen what are known as “cat-face” or “box-face” pines in photos and books, but never face to face. And while this is but one tree in more than 800 acres of woods, it helps tell a story of a vast sweep of eastern North Carolina, across a vast sweep of history. It’s exactly what I’ve come to find, although I wasn’t entirely sure what I was looking for. But once you see a cat-face pine, you’ll never forget. 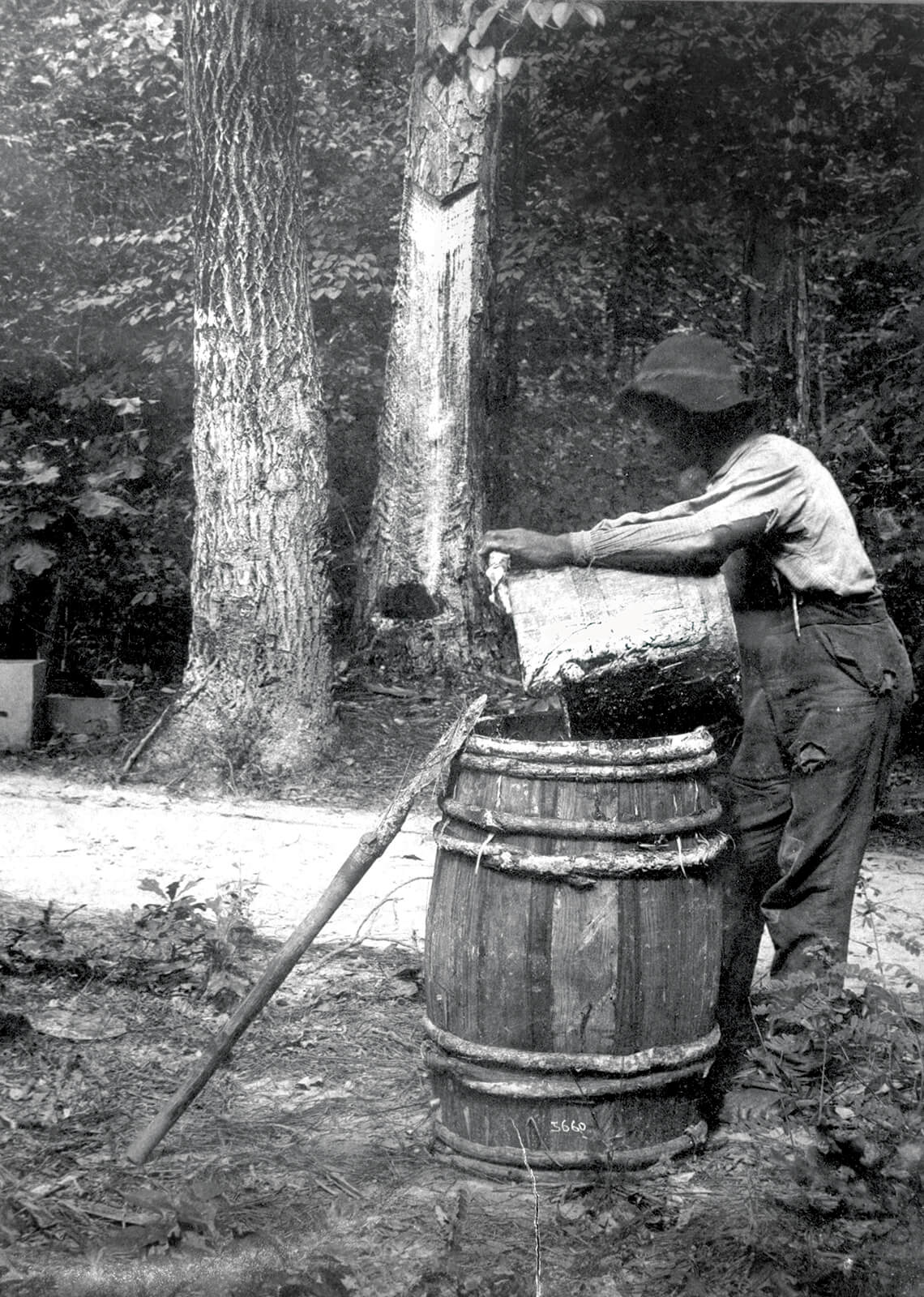 The naval stores industry — dirty and taxing for workers like this one in Sampson County in 1890 — was hard on trees and people. photograph by State Archives of North Carolina

Cat-face pines are a touchstone of a forgotten era, a time when pinewoods across the Coastal Plain were practically an open-air factory. Those old trees produced sticky gum, which was harvested by slashing the trunks and collecting the sap. From the late 1700s to the early 1900s, those old-growth cathedrals of longleaf pines produced a trio of products no less critical to global commerce than gasoline is today: Tar waterproofed the lines and ropes on sailing ships.

Pitch caulked and waterproofed the seams between hull timbers. And turpentine was an ingredient in oil paint, which coated the ships from top to bottom. In a world that moved by sail, North Carolina’s seemingly endless supply of what were known as “naval stores” helped fuel transportation across the globe. By the late 1700s, North Carolina was responsible for 70 percent of the tar produced in the colonies, and half the turpentine. In the 1800s, turpentine trailed behind only cotton and tobacco in exports from Southern states, and North Carolina produced as much as 95 percent of the total until after the 1860s.

But that good fortune exacted a horrific cost. Slashed and bled, burned and abused, the forests were, ultimately, decimated. In 1855, a traveler from Rocky Mount to Wilmington described the landscape in doleful terms. “The country presents the appearance,” he wrote, “of a dreary desolate pine barren waste.”

Which is hard to imagine while walking among the carefully protected forests of Genteel Plantation. Kelly and I ease up to the cat-face pine, weaving through briars. Once, the bark might have been peeled off 10 feet high, but the tree is healing itself. It seems to be trying to close the gap, to move past the wounds and insults of the past, just as Genteel and its modern-day caretakers are trying to heal the ravages of long-ago neglect. 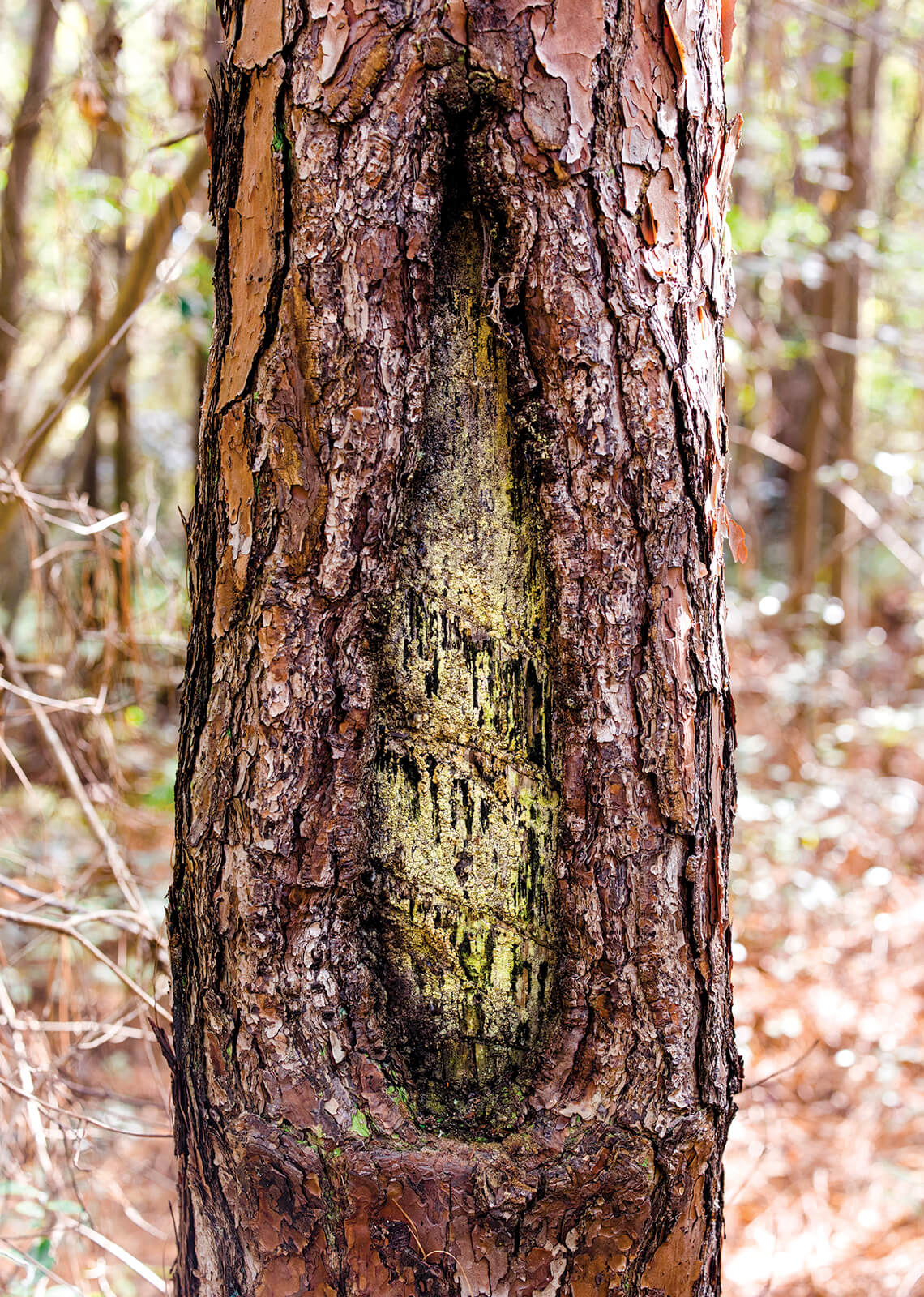 Surviving cat-face pines (above) have slowly healed, but new bark doesn’t hide the past completely. photograph by Matt Ray Photography

It’s a curious contrast: A landscape that now serves as a place of refuge and escape was once a place of hustling and bustling in the extreme — men hacking and hollering, horses clattering, giant fires smoldering to steam out the resin from pine boughs. For more than a century, these woods teemed with industry.

And then it was gone. Forests ruined, the workers moved south. The decline in wooden shipbuilding sounded the death knell of the naval stores industry. And while historians pondered the role of that old industry — its early reliance on slave labor, its later collapse, and the ravaging of an epic ancient forest — this singular longleaf pine held on, largely unnoticed, in the Genteel woods.

Until Kelly rediscovered it.

“Why is this the only one in these whole durn woods?” Kelly asks, astonished. He’s searched every square foot of the property, and this is the only cat-face pine he can find. Along this sand ridge, he figures, the longleaf pines had to be the predominant tree. “You can see the little ones coming up all around,” he says.

“You know what I think?” he asks, and I know he’ll answer without my prompting. “This one had to have come up in the last days. It was one of the last trees that were slashed and boxed for the tar. All the others had been used up and left to die. That’s why they’re all gone, and just this one little one is left.”

That’s all he can figure, Kelly says, and the silence that follows is the sound of a pinewoods forest keeping its opinions to itself. Whatever mysteries Kelly and I wish to unravel, we are left to unravel on our own. Because the cats aren’t saying another word.