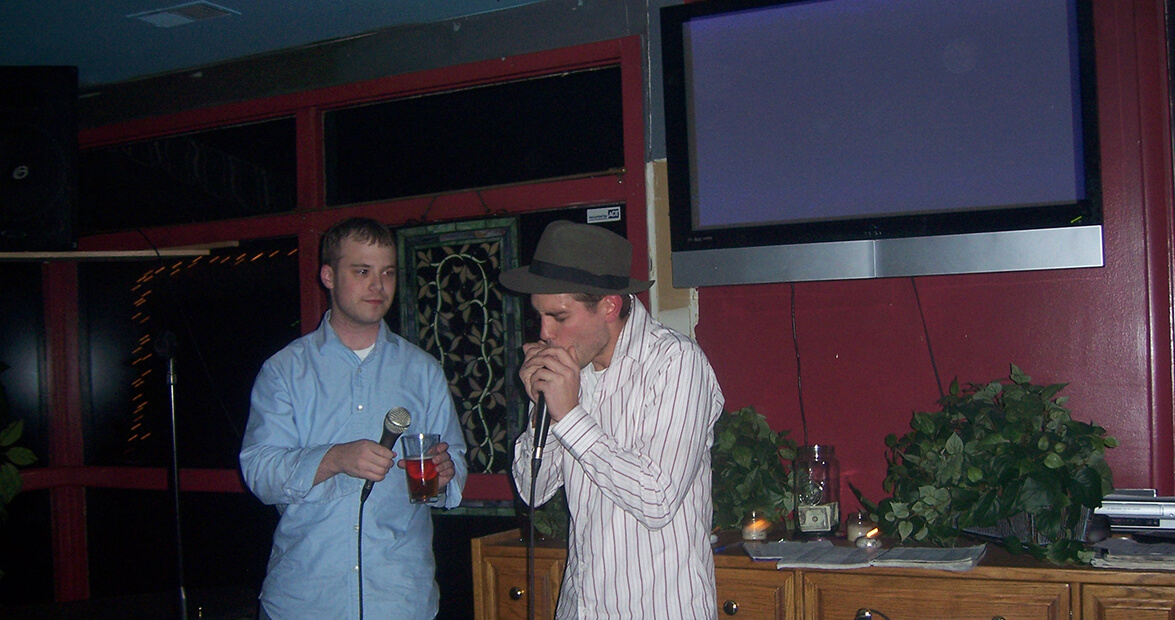 When I was in my 20s, I carried a harmonica around in my pocket for a number of reasons. First: Who doesn’t love the harmonica? Second: I had taught myself to play a few songs: Neil Young’s “Heart of Gold,” Tom Petty’s “Last Dance With Mary Jane,” and Billy Joel’s “Piano Man.” Third: I used to bounce around Charlotte every weekend with friends, and there was always a chance that we’d end up at a place that had karaoke that had “Piano Man,” and maybe, just maybe, my buddy Jason would be with me. If all of those things lined up perfectly, Jason and I would get up on stage. He’d sing. I’d play.

We did that quite a bit at Jackalope Jack’s on 7th Street in Charlotte’s leafy Elizabeth neighborhood. It got to the point that the karaoke regulars there would see us walking up and start to react. I’d pull the harmonica out, and cup my hands around it and the microphone. We’d get instant cheers. By the end of the song, we’d whipped the side room at Jack’s into a frenzy. I was single during part of this time, and believed women would approach me afterward, phone number in hand. Alas, my harmonica phase tragically coincided with my fedora phase.

We all loved going to Jackalope Jack’s. We found ourselves there for too many last calls. We’d meet there for birthdays. At one gathering, my friends Kevin and Natalie fell for each other. They’re now married and have a son. (He’s not named Jack.) A guy we know, barrel-chested and voluntarily bald, once stood by the door drinking a beer. People started showing him their IDs. He played along for two hours. My brother visited from Cincinnati just after I moved to Charlotte in 2006, and I took him to Jack’s. We sat in a booth among a circle of new friends. One of them had just learned about the town of Shallotte — which he took to be funny in the context of the city he was currently in — and kept yelling “SHALLOTTE!” at the top of his lungs. A woman sitting right behind us whipped around. Turned out she was a classmate of ours from high school in Cortland, Ohio, population 7,000ish. We still talk about that night.

Jack’s, then, is the closest thing Charlotte’s had to a universally loved neighborhood bar. It wasn’t a secret, but felt like it. For one thing, it sits in Elizabeth, which, along with its nearby twin Plaza Midwood, has always seemed to be one of the least pretentious places in Charlotte. During my harmonica days, NoDa felt like it was on a faraway island. Uptown felt like a hassle, because you had to get dressed up, pay to park, and then spend your whole night paying cover charges and waiting in line. Montford Drive felt like it didn’t have much of a soul. But Elizabeth, Plaza Midwood, and the dozen or so bars, restaurants, tattoo parlors, and shops nearby felt broken in and familiar, like an old baseball glove. We constantly schemed about ways to move there, because everything you needed was within walking distance.

Developers are now catching up to that idea. This week, the longtime rumor about Jackalope Jack’s was confirmed. If the current plans move forward, the place is going to be torn down and replaced with 200 apartments. “I think I made some of my biggest life decisions over a beer there,” a friend texted me after she heard the news. “It’s a damn shame.”

Nothing lasts forever, especially in Charlotte. Jason moved away. Even before that, “Piano Man” had worn out its welcome. One night, as we got up to do our routine for what had to be the dozenth or so time, a friend of mine overheard a conversation. “Oh great, this (bleeping) guy with the harmonica again,” a guy said. “He does this all the time.”

By the time I left Charlotte earlier this year, I’d stopped going to Jack’s on regular basis. But every time I drove by the place, plenty of people were there. I’m assuming those people wanted to live nearby. Eventually, the secret got out, and when that happens in Charlotte, bulldozers and cranes follow. In Plaza Midwood, new apartment buildings are sprouting up like seedlings along Central Avenue. Across the street from Jack’s, a long-time flower shop is slated to come down. Ninety-five apartments will replace it. Even in NoDa, which has inherited the mantle of Charlotte’s most hip neighborhood, people grumble that too many apartments and condos are going in, that quirky shops are being priced out, and that the light rail line under construction nearby will make the place into, well, Plaza Midwood and Elizabeth.

This seems to be a source of irritation around Charlotte. The neighborhood I love is changing, people say. Of course it is. Neighborhoods change. We change. Maybe at our core we’re the same. But we move. We spend our time doing different things. We get older. Neighborhoods, and the places in them, age just like we do.

Twice now, I’ve had the strange experience of being at a bar on the night it closed for good. The first time, in Huntington, West Virginia, nobody wanted to leave. To get us out, somebody got up on the bar and started spraying us down with the nozzle they used to make rum and Cokes. The second time was at Sir Edmond Halley’s in Charlotte, which eventually reopened. People crammed inside for one last drink and one last look around. They told stories that weren’t really about the bar. Instead, they were about themselves, and the times in their lives when that place meant something. My wife and I looked at two stools. We’d sat there on our first date. We remembered that night. A neighborhood bar is always just a backdrop. You and the people you know are always the stars of the show.

Some of those stars are trying to align to save Jack’s. The owners have two years left on their lease, and they say they’ll fight. The rezoning, which would lead to the bar’s demolition, still needs to be approved by city council, and that’s months away at the earliest. But in Charlotte, developers have a really high batting average when it comes to such things. So next time I’m in town, I’ll bring my fedora. I’ll call my friends. We’ll yell “SHALLOTTE!” And I’ll pull my harmonica out of my pocket, so long as we’re all in the mood for a melody, and you’ve got us feelin’ alright.