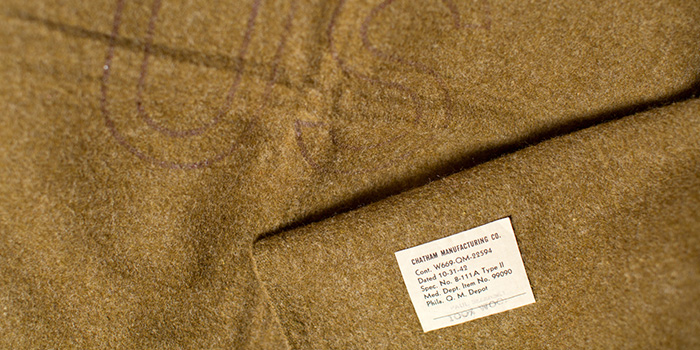 The pharmacist with the perfectly parted hair bends down to remove a wide box from a low shelf. A candle logo appears on the lid, along with three words arcing over it like a corona: “For Bedtime Comfort.” He opens the box to reveal a perfectly folded blanket still swathed in white tissue paper. “This blanket’s never been taken out of the box,” says the pharmacist, Dr. S. Jason Couch. It’s a blanket older than a ’57 Chevy, and it’s in such mint condition that a visitor might feel hesitant to even touch it.

But Couch says, Of course, go right ahead. The cream-colored fabric is trimmed in shiny satin. The label reads: “This is a heavy-weight, luxury quality, single blanket, constructed of 100% wool.”

The wool feels so soft. So cushiony and cuddly and snuggly. A winter-weary person could cocoon himself on Couch’s couch right now and tell January to go stuff it. But the blanket shall remain unused and unblemished here in what the pharmacist calls his “man cave.” (Museum is more like it.) Couch is home on an extended lunch break from Elk Pharmacy to show off the literal fabric of his community. Around Elkin, he’s known not just for filling prescriptions, but also for writing the book on Elkin’s history. And the history of this Yadkin Valley town is wrapped in the blankets of the Chatham Manufacturing Company, one of North Carolina’s earliest textile businesses.

“A wonderful place to work”

Chatham was the needle and thread of Elkin, stitching together weavers, darners, fitters, yarn finishers, secretaries, families, and neighbors into a textile-town mosaic. Through both Roosevelt administrations, through both World Wars, through both good times and bad, thousands of people worked at the factory, brimming with more than 3,000 employees in the 1950s and ’60s.

The pharmacist’s grandparents worked there (he for 41 years, she for 39). The two gray-haired men with white Styrofoam cups at Royall’s Soda Shoppe worked there. “That was Elkin,” says Robert Baldwin, who had a job at the plant as a security guard. He’s sitting here at Royall’s, where a woman waiting to pay her lunch tab joins the conversation. “It was a wonderful place to work,” says Mary Renegar, who put in 20 years at Chatham. She first worked in the burling department — where lumps were removed from cloth — before becoming a management secretary. “I just loved the energy of having it in the town.”

That energy began spinning into money in 1877 when Alexander Chatham and Thomas Gwyn bought a store, gristmill, and wool-carding business from Gwyn’s brother, Richard Ransome Gwyn. They renamed the business Elkin Valley Woolen Mill, producing blankets, flannel clothing, and knitting yarns. After the Northwest North Carolina Railroad came through in 1890, Chatham’s son, Hugh Chatham, succeeded his father as company president, and the business changed its name to the Chatham Manufacturing Company. “Around 1910, they were the largest blanket manufacturer in the South, and at one time, in the 1940s and 1950s, they were one of the largest blanket manufacturers in the world,” says Couch, who wrote the text and compiled photos for a book on Elkin’s history. “Chatham made literally millions of blankets during World War I and World War II.” 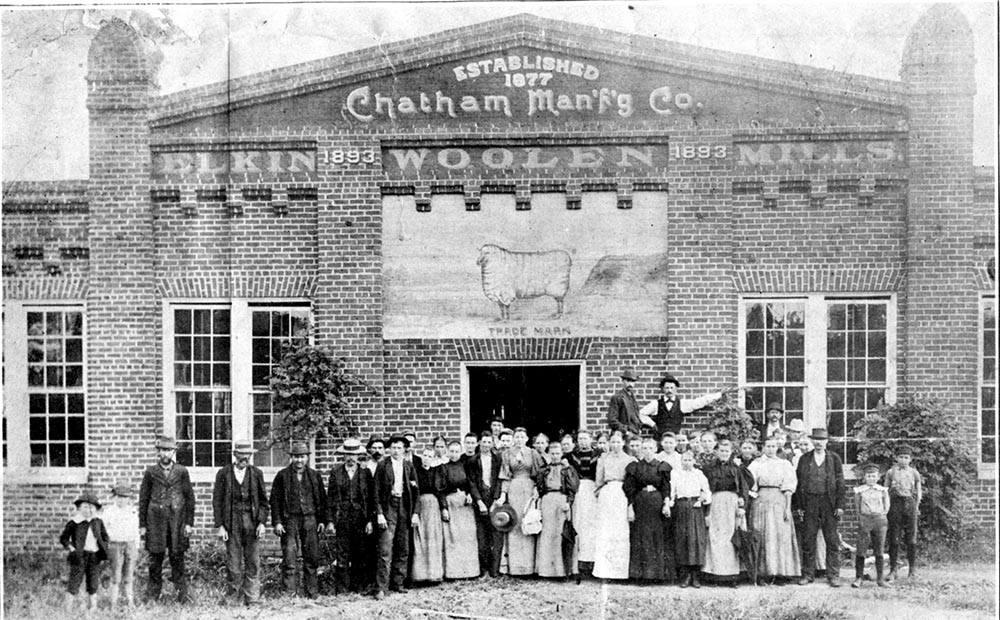 Those millions of blankets were bundled up and taken to the battlefield, comforting young, homesick soldiers like Fred Norman, whose memories of the South did little to soften the hard freeze of a Belgium winter. Toward the end of 1944, Hitler was rampaging for control of the deep-forested Ardennes region in what came to be known as the Battle of the Bulge. Norman was among the soldiers forced to sleep under a tarp, next to a tank, in the snow, in the subfreezing temperatures. He remembers the trucks that occasionally, mercifully, arrived to drop off overcoats and blankets for the troops.

“When they threw me a blanket, I could not wait to see where it came from,” says Norman, who’s 91 and lives in a neighborhood of big trees and bigger hills in his native Elkin. “I wouldn’t want to exaggerate, but I’d say there were at least four to eight times that mine had ‘Chatham Blankets’ on it.” Ask him if it felt good to touch that familiar softness in a cold, dark, dangerous place, and he musters a boyish reply: “Oh, good golly, yeah!”

Caring for the community 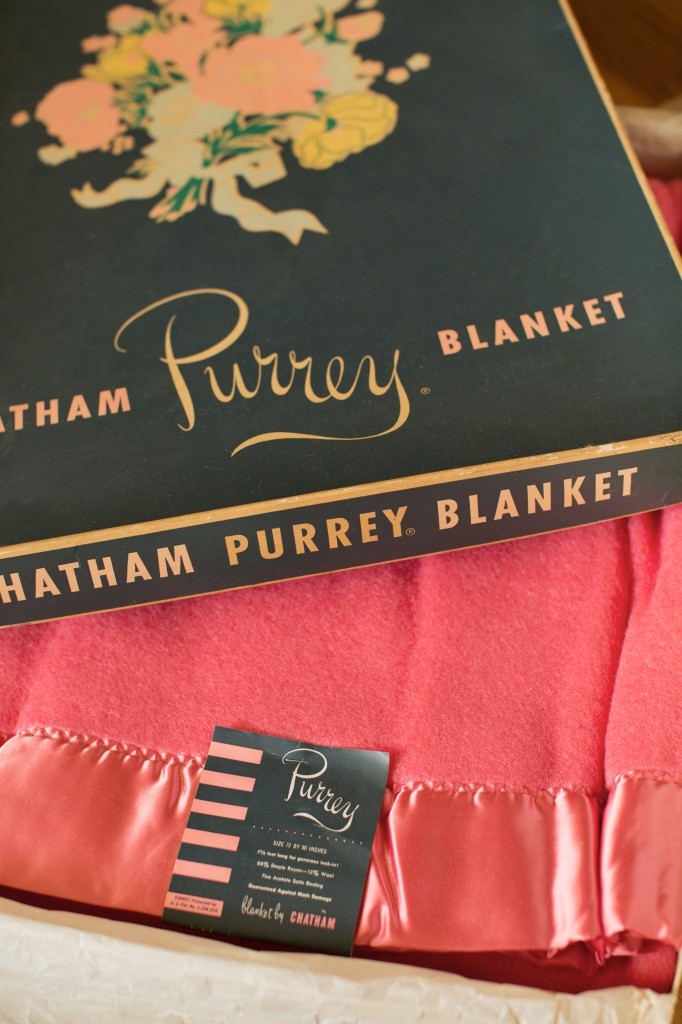 At home in Elkin, the Chatham Manufacturing Company was the brick beacon on the hill, the words “Chatham Blankets” spelled out in red letters that cast a warm glow in the night. Few things say tender loving care better than blankets, and it seems fitting that Chatham would exhibit such care for the town. The company built a hospital, a YMCA, and an outdoor pool. It also organized basketball and baseball teams for men and women, including a semipro ladies’ basketball team. “Chatham was so big to support the town in every way,” says Renegar. “From the town itself to the churches to the golf course to the parks, they were a big force in everything.”

Phillip Lyles, who worked at Chatham for 32 years, owns the Yadkin Valley General Store across the street from the sprawling plant. He recalls the company once using its private plane to fly home an employee — not an executive, not a manager, but a fitter on the assembly line — who suffered a heart attack while on vacation in Florida. “Chatham took care of its people,” he says. And for a week each July, he recalls, the plant closed for vacation. “There were more people from Elkin at Myrtle Beach the third week of July than there were in Elkin.”

Chatham did stretch its operations beyond just blankets. In 1936, the company began to produce upholstery for cars, and around 1960, the upholstery division expanded to include furniture fabrics. In 1940, Chatham moved its finishing operations from Winston-Salem to Elkin, prompting The Elkin Tribune to publish a 64-page special section welcoming all the new employees to town. “The mill really exploded at that point because now you had everything from raw materials to the finished product,” Couch says.

For most of the 1980s, cars packed the plant’s parking lots, with some employees forced to park along the shoulders of Main Street. To avoid gridlock, Elkin police had to direct traffic for each of the three shift changes. 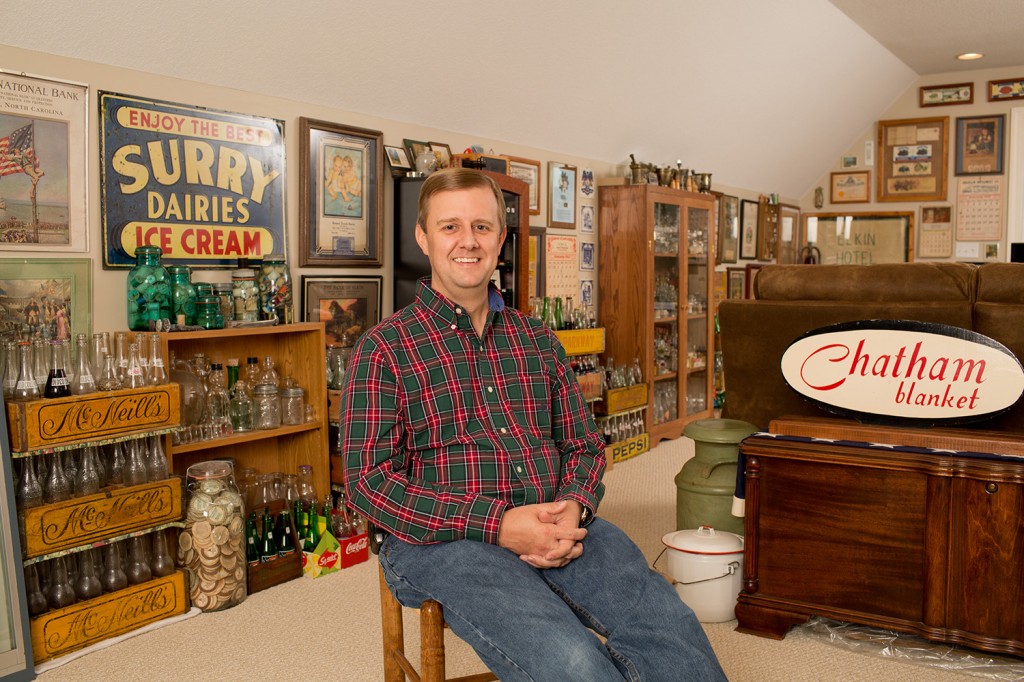 S. Jason Couch is well versed in all things to do with Elkin. photograph by Liz Nemeth

Finally, in 1988, after more than 100 years of local ownership, members of the Chatham family lost control of the plant to a Danish textile maker, which outbid them in a sale. But four years later, that business went bankrupt. The cavernous and mostly hollow factory buildings are now owned by True Textiles, which has roughly 100 on-site employees who make fabric for home furnishings and wall coverings.

Even with this cadre of workers, most of the plant stands eerily silent and forlorn — a “ghost town,” as Couch describes it. The parking lots are weedy and cracked. The interior is dark and cobwebbed. Glass is broken. It’s all a stark contrast to the still-soft, still-pristine blankets in Couch’s care.

The pharmacist removes the lid from another box to expose a dark pink blanket, also bound with satin, also wrapped in white tissue paper. “Feel that,” he says. “That’s luxurious. You can’t go to Walmart and buy that today.”

He lays the crinkly paper back on top of the blanket and closes the lid. And you’re left with a most comforting feeling: This pharmacist with the perfectly parted hair will keep this beautiful blanket safe and warm and treasured.