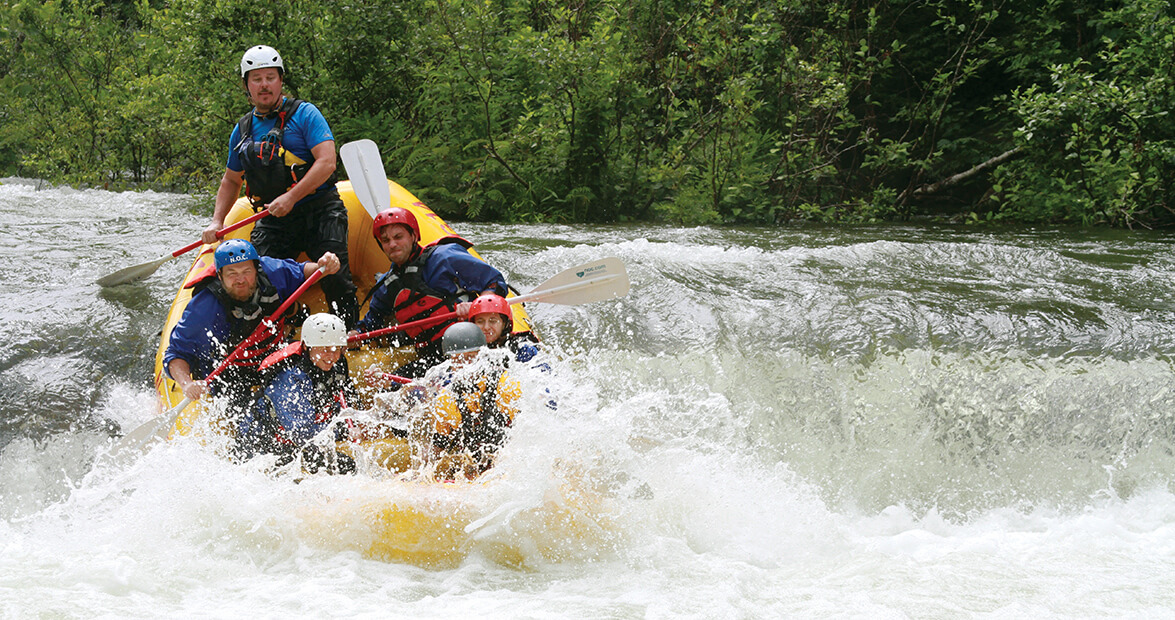 When the raft guide yelled “BEES!” I knew my first instinct — jump into the water — was a terrible idea. All sorts of bad things can happen to you if you swim in the Cheoah River. More so than other raftable rivers, the Cheoah is choked with hidden brush and tangled vegetation that allows water through, but not people. Hence, death by shrub is a real possibility. These death shrubs are called strainers and sieves. Toss in undercut rocks and hydraulics that can also trap you and pull you under, and you have, if you exit the boat, a variety of opportunities to die. So, no, I decided not to jump into the water, and instead swatted futilely at wasps while yelling “Gahhhhhh” until we paddled downstream to safety. The bees, actually paper wasps, stung me on both forearms and under the eye. I was asked, “How’s your eye?” for the remainder of the trip.

Stephan Hart, our trip leader — goateed, ponytailed, and trained in botany — waited a few minutes, after I’d been properly Benadryl’d, to share two important facts. First: We hadn’t even gotten to the hard part of the river yet. Second: Wasps usually build nests that hang high over the water. Of course, when they crack open the gates on the Santeetlah Dam upstream, the water rises, and the limbs that hold the nests are within reach of, in our case, a guide who is desperately trying to pull a raft into a rare spot of calm water on a narrow river. Hence the stinging. Add in the shrubs. And trees growing, unnaturally, in the middle of the current. And strainers. And sieves. We were rafting a river that had forgotten it was a river.

For nearly 75 years, there was barely a trickle in the nine-mile stretch of the Cheoah between Lake Santeetlah and Lake Calderwood. In 1928, Alcoa built a dam to power its aluminum smelter in Tennessee, which diverted every drop of Cheoah water through man-size pipes to spin turbines that were miles away on the Little Tennessee River. “The river was dead,” says Mark Singleton, executive director of American Whitewater, an advocacy group for kayakers and rafters.

Singleton and others knew they could revive the river through scheduled releases of high water. So they stuck themselves in the middle of a fairly dry legal process: the renewal of Alcoa’s federal dam permit. After a lot of legalese, American Whitewater convinced the feds to mandate 18 days of whitewater a year, starting in 2005, for the next 40 years.

The first crop of Cheoah guides had to learn how to run a hand-cut, 15-foot-wide channel clogged with living and fallen trees, plus a lot of rocks blasted into the riverbed from the creation of a nearby road. “The first releases were like free-skiing,” Singleton says. “You saw a gap, and you just went for it.”

Even today, it’s impossible to know the Cheoah River like other rivers. One guide, Jonny Horton, explained how crazy it was to think that he’d been working on this river since 2008 and had only paddled it 100 or so times. The Nantahala Outdoor Center says only about 2,000 rafters have paddled the Cheoah. Ever. It’s a place where the club is small, nature is far too close, and the stakes are still high. 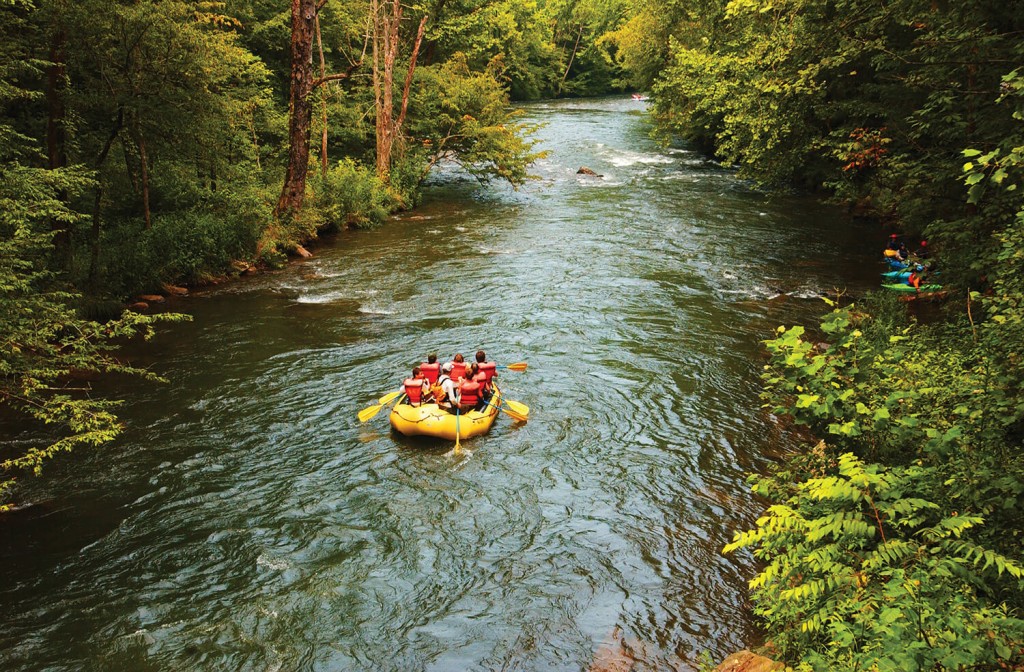 The river is almost too dangerous to raft. photograph by Johnny York/Nantahala Outdoor Center

Swatting away branches is a skill on the Cheoah, at least when they’re small enough to be swatted. Toad Hole is a rapid that used to be called Slap in the Face, because the raft would fly over a wave and a low-hanging tree limb would, quite literally, slap you in the face. The U.S. Forest Service rules only allow outfitters to remove the most dangerous plants from the channel. The face-slapping limb was only cleared after it slapped one person too many, and broke off on its own.

Slowly, the Cheoah is becoming less raw. Each time the dam gates open, the water washes away flora and makes way for fauna, like smallmouth bass and the critically endangered Appalachian elktoe mussel. Even so, the first few miles are clogged with fallen trees and Volkswagen-size root balls that take skill to navigate. The correct line often involves running over a bush. I feel like an explorer blazing through an untamed wilderness. Guides, however, know things that I don’t: that a route that looks to be the best way to go often turns out to be, in hindsight, the worst. Six miles in, there’s a split. A wide, inviting path veers right, and a narrow chute peels off to the left. Going right dumps you into what was once a pond used a century ago to collect logs. It’s surrounded on all sides by vegetation. Once in, a raft has to bushwhack its way, if it can, through a single tiny opening clogged with sharp, woody plants.

Hart knows to avoid the pond, and is skilled enough to both guide the boat and have a long, in-depth conversation about the plants we’re seeing and dodging: Rhododendron maximum, maples, sycamores, and mimosas. He also helps us learn that we can’t seem to paddle in unison.

Then comes the wasp attack, more rapids, more narrow paths between tag alder and maple trees, big waves, more mowed-down bushes, and a few miles later, a stop for a snack to fuel us up for what comes after we pass under the bridge to Big Fat Gap. Southeastern rivers, in general, are known for being narrow, steep, and rocky. The Nantahala River, a relatively easy raft ride, drops 26 feet per mile. One portion of the lower Cheoah, which we are about to raft, drops 140 feet per mile. “It tilts, tilts, tilts, and dumps into Lake Calderwood,” Hart tells us. “If you’ve had enough halfway, it’s only going to get bigger.”

After the bridge are three big rapids with no break: Chaos Theory, Bear Creek Falls, and Python. Again, that deception. At Bear Creek, a wide, seemingly calm route to the left will drop you 10 feet over a waterfall, onto a pile of rocks. To the right, a narrow flume bends you in front of spectators who want to see you wreck.

We stop talking about rhododendron. We start paddling together, because we don’t want to exit the boat into the roaring water. We’re so locked in and ready for rapids that we take for granted a rare patch of calm water, innocently hit a shallow rock sideways, and a yoga instructor from Memphis tumbles out. Quickly, the extra guide sitting in the bow, there specifically to catch swimmers, reaches out and snags her. Hart casually reaches back and grabs her paddle.

Soon after, we paddle furiously over a wave train that weaves around rocks in front of the Historic Tapoco Lodge, where another crowd has assembled, waiting for carnage. The last three rapids, Mustard, Ketchup, and The Stick, come quickly as we pass through the only part of the Cheoah that can be called a gorge. To show off, Hart pulls off a maneuver he calls “skinning the cat,” guiding us through a small passage between boulders, which requires our (finally) coordinated paddling and a lot of intricate steering.

And that’s it. Suddenly, we find ourselves on the calm water of Lake Calderwood, just below the old crusty Cheoah Dam (the same one that Dr. Richard Kimble leapt from in the 1993 movie The Fugitive). I am happy, and my adrenaline starts to wear off. I have conquered this river. I did not swim. My eye has not swollen shut. I have joined the club. My reward: a slow, mile-long float to the take-out. Hart starts talking about nightshade and pokeweed again. But before that, he turns around and sees a big sign sitting on a spit of land between the dam and the foaming Cheoah. “Warning: Dangerous Waters,” it says.

“Huh,” Hart says. “Shouldn’t that sign be at the beginning of the river?”