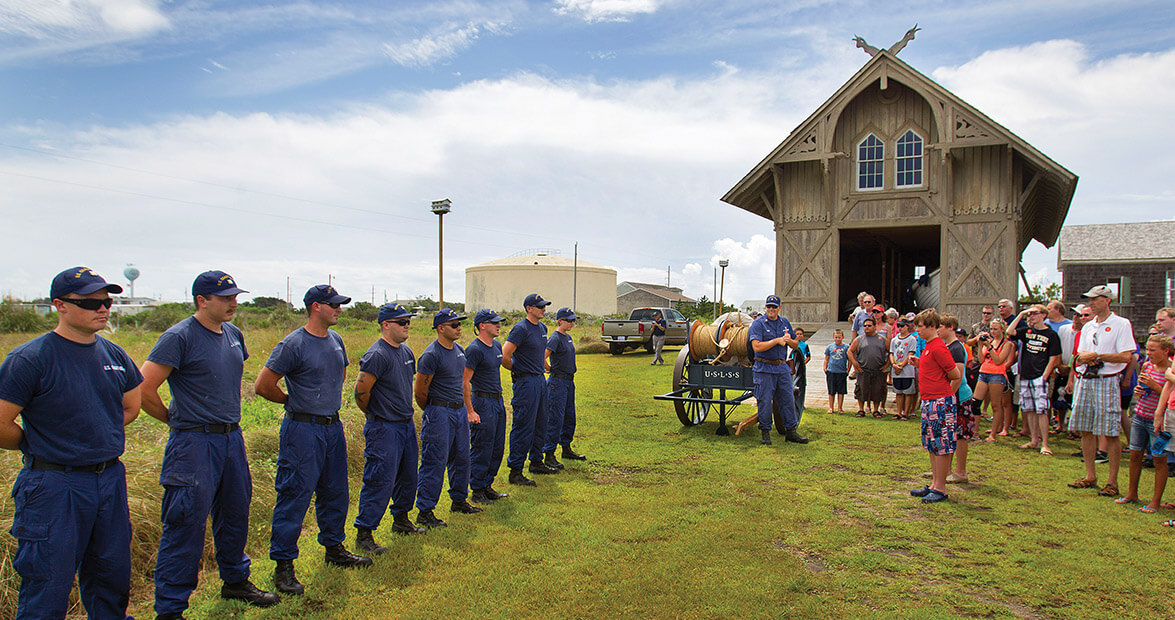 It had promised to be another humid, humdrum Outer Banks August afternoon. The ocean had worked itself into a welter of whitecaps. Hefty waves lashed at a beach devoid of houses on stilts and bodies on blankets. The wind blew at a moderate clip, the sun shone brightly, and no summer storms threatened.

Here at the Chicamacomico Life-Saving Station in Rodanthe, the man on lookout duty, Leroy Midgett, spotted a steamer ship five to seven miles out at sea, its funnel and spars set against the hazy horizon. It was August 16, 1918, and World War I had been aflame for four years. Crewmen of the Coast Guard’s lifesaving stations stayed on constant lookout for German submarines, known as “U-boats,” which were blowing up Allied ships along the East Coast.

The ship now in sight was the SS Mirlo, a British tanker on a voyage to Norfolk, Virginia, from New Orleans, and loaded with nearly 6,700 tons of gasoline. Around 4 p.m., Midgett saw seawater shooting like a geyser from the back of the vessel, followed by roiling black smoke. The Mirlo soon turned toward shore as the captain tried to beach his shattered ship. But then, another explosion, and another — terrific booms clearly heard on the beach. Flames soared as high as 100 feet in the air.

The keeper in command of the lifesaving station that day, Capt. John Allen Midgett Jr. — “Cap’n Johnny,” as his crew called him — immediately launched surfboat No. 1046 with six lifesavers, or surfmen, on board.

Nearing the inferno, Cap’n Johnny encountered a lifeboat carrying the Mirlo’s captain, William Rouse Williams, and 16 men. Williams told the rescuers that his ship had been torpedoed by a German sub, and that two other lifeboats were adrift in the maelstrom. The lifesaving crew rowed into the burning gasoline, oil, and wreckage to rescue six men from the capsized boat.

The lifesavers loaded the men onto their boat before pressing into the smoke and wind in search of the other lifeboat. They soon found it overloaded with 19 men and towed it, along with the first boat they’d met, toward shore. In the end, 42 of the 51 souls aboard the Mirlo were saved by the surfmen of the Chicamacomico Life-Saving Station.

Theirs is a story with all the elements of a Hollywood action thriller — drama on the sea, fiery explosions, a perilous rescue — but the tale of the U.S. Life-Saving Service has been largely forgotten in American history.

The name of the station is pronounced “Chik-ah-ma-COM-eh-co,” an Algonquin Indian word supposedly meaning “land of shifting sands” or “sinking sands.” It was among seven lifesaving stations commissioned for the North Carolina coast, long notorious for shipwrecks, in 1871. The station opened in December 1874, but the wild weather of Hatteras Island abused it so much that a new one was built in 1911, a handsome building of cedar shake siding that still stands today.

The station employed up to eight lifesavers and one keeper, all of whom worked six days a week and spent Sundays on call. Charlet once read a description of their livelihood that went something like this: “It’s hours and days and weeks and months of sheer boredom interrupted occasionally by a few moments of utter terror.”

That’s not to say they were sitting around every day waiting for the next fate-tempting rescue. They underwent a strenuous daily regimen of exercises. Monday: the beach apparatus drill. Tuesday: the surfboat drill. Wednesday: the flag drill. Thursday: a repeat of the beach apparatus drill. Friday: first-aid training. And if anyone wanted a day off, Charlet says, the crew member had to give a 30-day notice and pay for his substitute. “This was a very strict organization,” he says.

In 1915, the U.S. Life-Saving Service merged with the U.S. Revenue Cutter Service, an armed customs enforcement agency, to form the U.S. Coast Guard.

By the mid-20th century, with the emergence of helicopters and larger, more powerful boats, the lifesaving stations had become obsolete. The Chicamacomico station went out of service in 1954, and its buildings were promptly abandoned.

For years, the site’s seven structures languished in the elements and lured vandals. At one point, the local fire department requested to use the site for a practice burn. That sparked the formation in 1974 of the nonprofit Chicamacomico Historical Association, which bought the site with the intention of preserving it. But more than 20 years would pass before any substantial restoration began.

Today, Chicamacomico is one of the few lifesaving stations in the country that still has all of its original buildings — the cookhouse, the original 1874 station, the 1907 Midgett House — and offers them all for self-guided tours. A sandy path cuts through the dunes to the beach, where a drill pole simulates the mast of a ship used by the lifesaving teams in their beach apparatus exercises. “It just takes minutes to find out what incredible heroes these people were,” Charlet says. “And you can’t help but be mesmerized.”