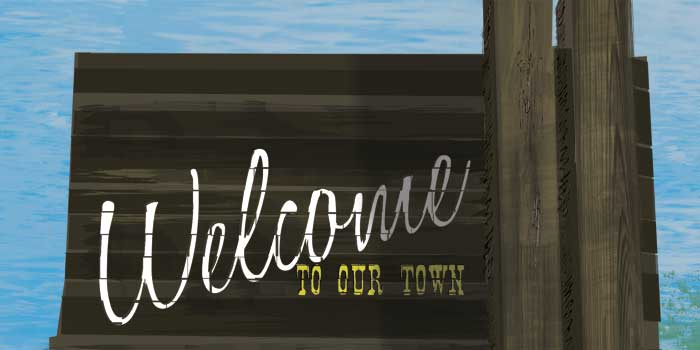 Doris Wilson lines up a putt. She hovers over her pink Flying Lady ball, pulls back her flat Spalding blade, and taps the ball. It skitters across the green carpet and misses, wide left.

Doris has a little vision off to her right, enough to know that she missed. But she’s virtually blind, just like the rest of the campers at Camp Dogwood. She loves miniature golf. Since the Lions Club turned an old horse stable into a nine-hole course back in April, campers keep showing up, wanting to play. They ride up the hill on the back of a golf cart driven by guys like Stan to get in a round or two.

Doris finds the crook in Stan’s elbow. And they walk up to hit her second shot.

Camp Dogwood, backed up on to the shores of one of Lake Norman’s many inlets, is the only place of its kind in North Carolina, a bit of a secret hidden in plain sight among the rolling pastures and breeze-blown trees of Catawba County. A week ago, the alarm repairman who came out, a guy who grew up around here, remarked that he’d seen the signs for Camp Dogwood but never knew what they did here. Happens all the time, says Susan King, the camp’s director.

The money to run this place comes solely from the North Carolina Lions, a confederation of local clubs, more than 300 in all, that chip in to keep the camp running. One of those clubs is just up the road a bit. Its home, the Sherills Ford Lions’ Den, is a 70-year-old white clapboard building once used to store sweet potatoes. The original charter is yellowing on the wall, with gold tassels hanging from its frame, bracketed by big, felt Lions Club pennants. Ed Nolley, a big man with big hands and a bigger handshake, leans back on a wooden chair. He is the incoming president of the club. The chapter has about 22 members, mostly retirees. Only about 15 ever show up at a time. The club used to be bigger, Nolley says. Most clubs used to be bigger. “The key is to keep the membership because,” and he smiles and sort of shrugs at this part, “they’re gonna die.” 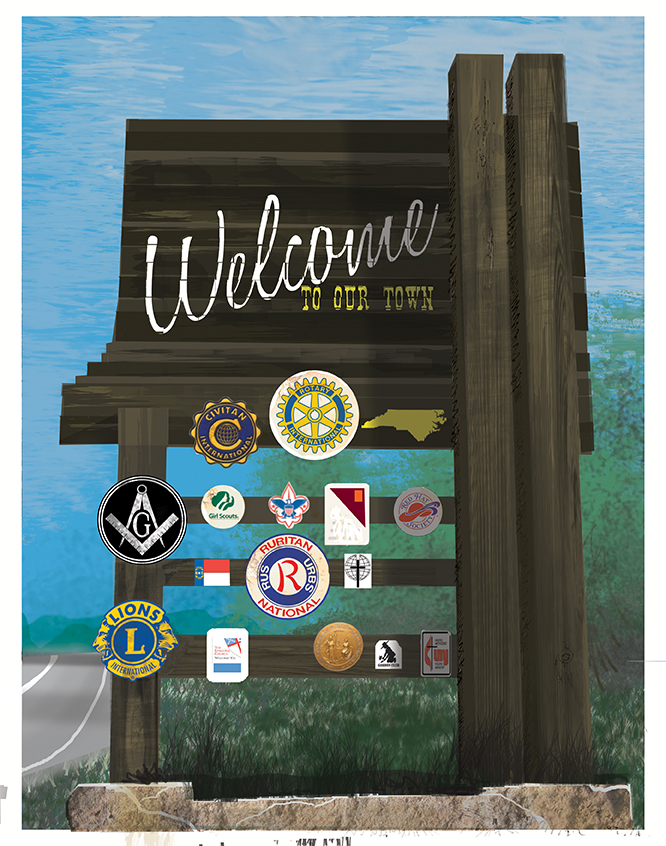 Though their good works continue to play a vital role in the community, most service clubs today face the problem of old age. It wasn’t always like that. All of these clubs grew from older service organizations, such as the Independent Order of Odd Fellows and the Masons. The first Masonic lodge was here when North Carolina was still a colony. The second, organized in 1755 in Wilmington, is still active today. There are now 46,000 Masons serving in the state.

Around the turn of the 20th century, some new groups formed with the intent to not just socialize but also to serve their communities. The Daughters of the American Revolution, a history-preserving group limited to female descendants of Revolutionary War patriots, created its first chapter in Charlotte in 1898. Then the Elks got here, swearing in their first members in Goldsboro on May 8, 1902.

The Rotary came next, starting a chapter in Raleigh in 1914. U.S. Senator Jesse Helms was chapter president at one point. The Kiwanis club arrived a few years later, then came the Civitans, the Lions, and the Optimists.

Their memberships grew during the Depression and blossomed after World War II, when returning soldiers who had just united to fight a common enemy willingly teamed up to tackle the problems they found when they returned home. The clubs became a way to network and to be a part of the local community. Often, bosses would encourage their workers to join. Many companies paid the dues. In many places, if you wanted to be somebody, you first had to be a member.

The organizations staked out different territories. The Rotary worked to eradicate polio and now runs international exchange programs. Civitans help people with developmental disabilities. Optimists focus on young people; just look at how many baseball fields and parks around North Carolina have that group’s logo on them.

Lou Anna Hardee joined the Optimist Club of Greenville in January 2005, and she worked hard enough to be elected governor of the North Carolina East District of Optimist International, a district that stretches from Chapel Hill to the coast and includes 34 clubs and about 1,300 Optimists from the eastern part of the state.

Hardee can rattle off facts.

The work of every member helps 33 to 35 kids. The Optimists sponsor little league baseball and youth soccer, among other things. They offer scholarships to kids in North Carolina who win essay and oratorical contests. The last topic went something like this: “If I were leader of the free world, the first issue I would address would be …” That was a tough one, Hardee says.

Hardee’s heart, though, is in the Optimists’ goal to raise money to find a cure for childhood cancer. Her son is a survivor. So is her grandson. She walked into the Duke Children’s Hospital and was struck by the sight of kids in cribs, not even 6 months old, struggling to beat the disease. She’s a firm believer that finding a cure for children will lead to finding a cure for adults. But she’s most passionate about kids. “Just to look in a child’s eye and see the twinkle in it,” she says. “I want to provide that twinkle.”

Thompson has a theory: When the servicemen came back from World War II, they still felt the need to be part of a collective unit. They went from the service to serving.

“They wanted to be a part of what they were fighting for,” he says.

Is there still a role for service clubs today? Of course, Thompson says.

Hardee agrees: “People still believe in serving.” She says there’s just something about the camaraderie.

Sure, things aren’t what they used to be. People started living and working in different places. Commutes lengthened. Husbands and wives both took jobs outside the home, working hours got longer, and free time dwindled. Now you can find a common cause just a click away, no matter how physically close or far, and all without making a dent in your lunch hour.

Jeff Elder, a former Charlotte Observer reporter, now a social media consultant, believes social media and service clubs were made for each other. “The screen can only go so far,” he says. He says face-to-face conversation is more important than ever. “I think those guys,” he says, meaning the Lions, Optimists, and others, “can have some swagger.”

Gamely, some of the Optimist clubs in Hardee’s district are starting Facebook pages. The Lions started what they call cyber clubs a few years ago, and they handle most business online. But the old ways dominate.

“Ninety-eight percent of what we do is person-to-person, face-to-face,” says Steve Walker, executive director of the North Carolina Lions. The Lions don’t launch big advertising campaigns. They don’t beg for new members. (Although most clubs are by invitation, anyone who wants in typically gets a warm welcome.)

Most clubs keep a low profile in their communities. While you’ll see their logos bolted to signs at the city limits, they do much of their work quietly. You might see Civitans helping out at the Special Olympics. You might see the Lions Club Vision Van heading from town to town, helping people check their eyesight. But for a club built on helping people with their vision, the Lions can be hard to spot. “Lionism is one of the best-kept secrets,” Walker says.

The Sherills Ford Lions Club still meets every second and fourth Thursday of the month. Wanda Fells still whips up a home-cooked meal for everyone once a month (barbecue chicken and rolls the last time). The club still finds ways to bring in money. And they still find people to help. “The need is there,” says Nolley, the incoming president.

Nolley tells a story about Clarence White, who used to own a farm right up the road. Graduated from Davidson College. Knew the Bible. Raised cows and chickens. He was a Sherills Ford Lion. And he was blind. It was his land — his 60 acres — that Camp Dogwood sits on today.

Back at camp, Stan and Doris have finished the round. Doris shot a 24. Not bad, although not her best. Some of the other campers listen to the morning devotional. One sings; he finishes to applause. Others sit in rocking chairs facing the lake, relaxing. Some have a drawn-out discussion about beer. Some are out on a boat ride. Some check out pieces of art on loan from a museum in Raleigh, running their fingertips across the cuts in the wood and lumps on the painted canvases. Others create their own works of art. “I want to have painting classes for blind people,” says King, the camp director.

Camp Dogwood continues with that spirit, by not focusing on the one sense they don’t have, but on the others that they do.

Up by the front door, several copies of The Lion Advocate newsletter sit on a shelf. Inside, spread out on the newsprint, are bits and pieces of club minutiae, grab-and-grin photographs of important people in the organization, and the names of Lions who recently died.

One of the headlines asks a simple question: Did We Serve Enough?