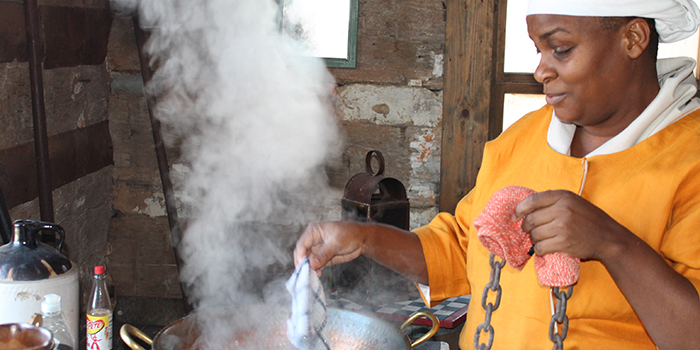 It’s a cold December morning at Historic Latta Plantation in Huntersville, the circa 1800 cotton plantation, now a living history farm. 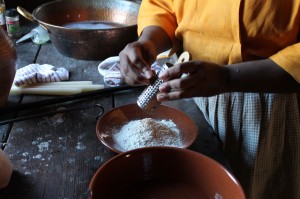 Clifton grates whole nutmeg to season chicken she is about to fry. photograph by Hope Yancey

Clarissa Clifton, who has been serving as a volunteer food historian at Latta, meets me in period costume to show me the kind of living history cooking demonstrations she provides visitors. It is one of her last days in North Carolina before her paid job in information technology moves her to Atlanta.

On this day, Clifton prepares fried chicken cooked over an open hearth in the fireplace of one of the cabins. She has often made stews, cornbread, hoecakes (cornmeal cakes), and biscuits.

Clifton attributes her passion for historical cooking methods to her paternal grandmother, Lillie Mae Cooper. Grandma Lillie had a gas stove but preferred to use a wood-burning stove instead, she says, cooking dishes such as beans, okra and tomatoes, and hoecakes. Clifton recalls that when she was a little girl, she was confused by the absence of any buttons on her grandmother’s stove.

“I loved her hoecakes,” she says. She tried re-creating them using vegetable shortening and butter, but couldn’t seem to get the flavor just right. Then she learned the secret was using lard and made the switch. It worked.

The smell of woodsmoke fills the room as Clifton keeps up a fascinating commentary about food and history – and shares opinions about modern kitchen appliances, kitchen countertops, and floors – all while expertly frying a cast iron pot full of chicken over an open hearth. She makes it look easy. 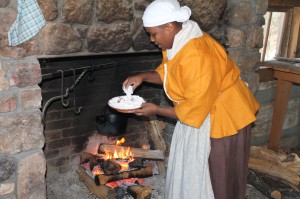 Clifton places chicken to cook in a cast iron pot over an open hearth. photograph by Hope Yancey

While fried food is considered fast food today, frying was special in the past, Clifton says. If you went to someone’s home and they served you fried food, “You knew they had to plan their day around preparing your meal,” she explains.

African-American slave food history is one of Clifton’s areas of interest. Among enslaved people, house slaves typically had better diets than field slaves, she says. House slaves ate the leftovers after guests had eaten their meals, while field slaves might eat hoe cakes prepared using the blades of their hoes as griddles.

Some of Clifton’s favorite experiences at Latta have been talking with the visitors. “I love hearing from the older visitors,” she says. They remember how their mothers and grandmothers cooked.

“I didn’t realize how much food history I had in my own family,” Clifton says, mentioning a relative who makes cane sugar syrup. This history helped prompt her to write her first cookbook, which she hopes to turn into a series. 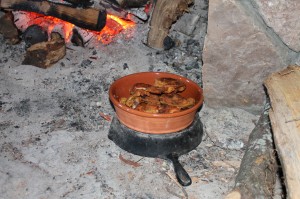 Fried chicken is one of the dishes Clifton often makes to demonstrate historical cooking methods. photograph by Hope Yancey

In addition to Latta, Clifton has offered her skills at other historic sites throughout the Carolinas: the President James K. Polk State Historic Site in Pineville, Historic Brattonsville in McConnells, South Carolina, and Old Salem in Winston-Salem.

Clifton’s job in IT may be squarely 21st century, but she spends her free time as a volunteer immersed in the foods and cooking methods of the 18th, 19th, and early 20th centuries.

“This is my first love,” she says, referring to her cooking. Find Clifton’s blog about her cooking experiences at thecrookedspoon.org.

Mix flour and salt and cut lard into dry ingredients. Combine sweet potatoes into the flour/lard mixture until incorporated. If needed, use some of the sweet potato water to moisten dough. Allow to rest in a cool area for 1 to 2 hours.

Grease inside of Dutch oven and pinch off portions of dough and pat out by hand to place into Dutch oven.

Pull coals out of fire onto hearth and sit the Dutch oven into them. Place lid on top of Dutch oven and place coals on top of lid. Bake for 25 minutes. Adjust coals if needed.

—
Hope Yancey is a freelance writer in Charlotte. She is a regular contributor to the community news editions of The Charlotte Observer. 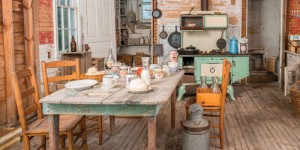