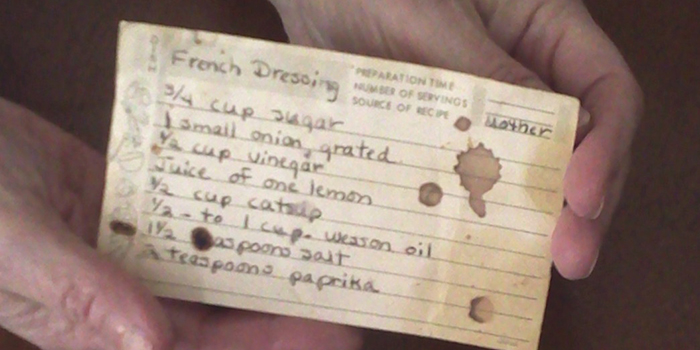 My late maternal grandmother, Nye Rivers, told me stories when I was a teenager about her own teenage years with her sisters: picking cotton at their grandmother’s house in the country and drinking “blackberry acid,” a combination of blackberry juice, sugar, and water. 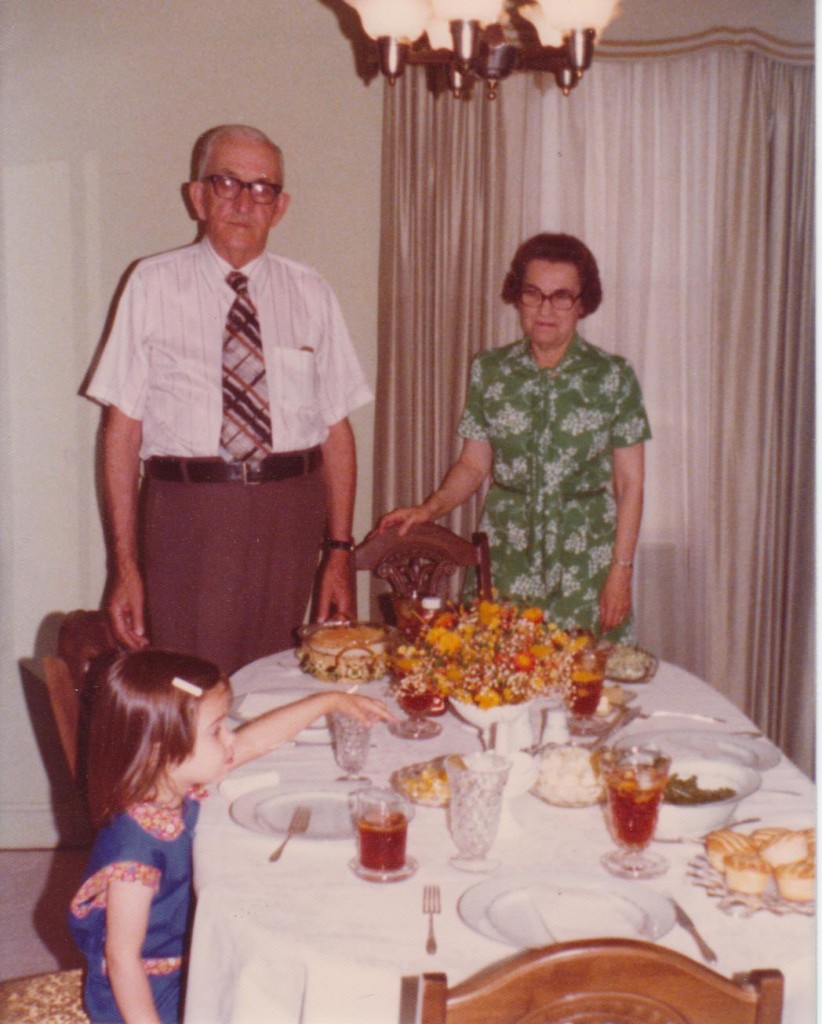 Nye Rivers (wearing green dress) stands at her dining room table set for company in May 1977.

Nye went to Limestone College in Gaffney, South Carolina, where two of her four sisters attended with her as part of the same class in the late 1920s and early 1930s. Though they were different ages, the girls shared a close bond and timed their education to go to college together. Nye worked outside the home at a time when many women did not and held a variety of teaching positions through the years, including a stint, I’m told, teaching in a WPA literacy program. But the thing I associate most with her is skill in the domestic arts, through which she found the energy to express her affection for family.

In the realm of crafts and sewing, Nye ruled. My mother says that when she was growing up, she chose outfits she desired from magazines or catalogs, then went with Nye to shop for materials. Nye could make almost anything simply from a picture. Among her masterpieces: a strapless royal blue gown, a light green taffeta dress with harem skirt, and a black velvet sheath dress with polka-dot net sleeves.

Nye also was an excellent home cook, who did it all without benefit of many of the conveniences of a modern kitchen. She was known for her homemade salad dressing and grated apple pies baked with fine bits of fresh apple. When she made the car trip to visit us in North Carolina from her home in Camden, South Carolina, she would bring a jar of the salad dressing or a pie. Nevertheless, she indulged in the occasional store-bought treat. Her modest kitchen held an ever-present red can of Pringles potato chips on top of the refrigerator. 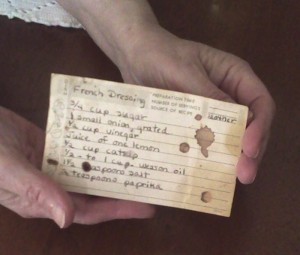 My mother, Ann Yancey, holds the recipe card where, many years ago, she wrote down the salad dressing recipe that her mother, Nye Rivers, used.

In an old cookbook, spattered with stains and turning brown with age, something caught my eye once. It appeared at first glance to be an unremarkable recipe for a cake: sugar, shortening, eggs, canned pumpkin, vanilla, flour, baking soda, baking powder, salt, cloves, nutmeg, cinnamon, and allspice. It was the note underneath the recipe, handwritten in blue ink using a familiar shaky cursive, that intrigued me. About the person who contributed the recipe, Nye wrote that she “was a fellow teacher and friend of mine as we taught school in Green Sea, SC, together. A lovely person. 1937-1939.” I was charmed that she had taken the time to write notes like that next to recipes. I’m not sure anyone does that anymore.

Meals at her house in Camden were formal productions conducted with decorum, no matter what was on the table. Picture guests seated around the table using their manners and passing each dish the proper way. Fortunately, when my sister and I were little girls, she realized that dining room furniture was good for more than dining. It held other potential, too. She was not above getting down on the carpet to stretch a bedsheet across two chairs, a makeshift tent for playing on the floor.

Below is the salad dressing recipe Nye used for much of her life. I’ve edited it for clarity.

Combine all ingredients and shake them. Shake again before serving because ingredients may separate. Keep refrigerated. Serve on tossed salad or iceberg lettuce wedges.

Hope Yancey is a freelance writer in Charlotte. She is a regular contributor to the community news editions of The Charlotte Observer. Find more of her archived stories here.