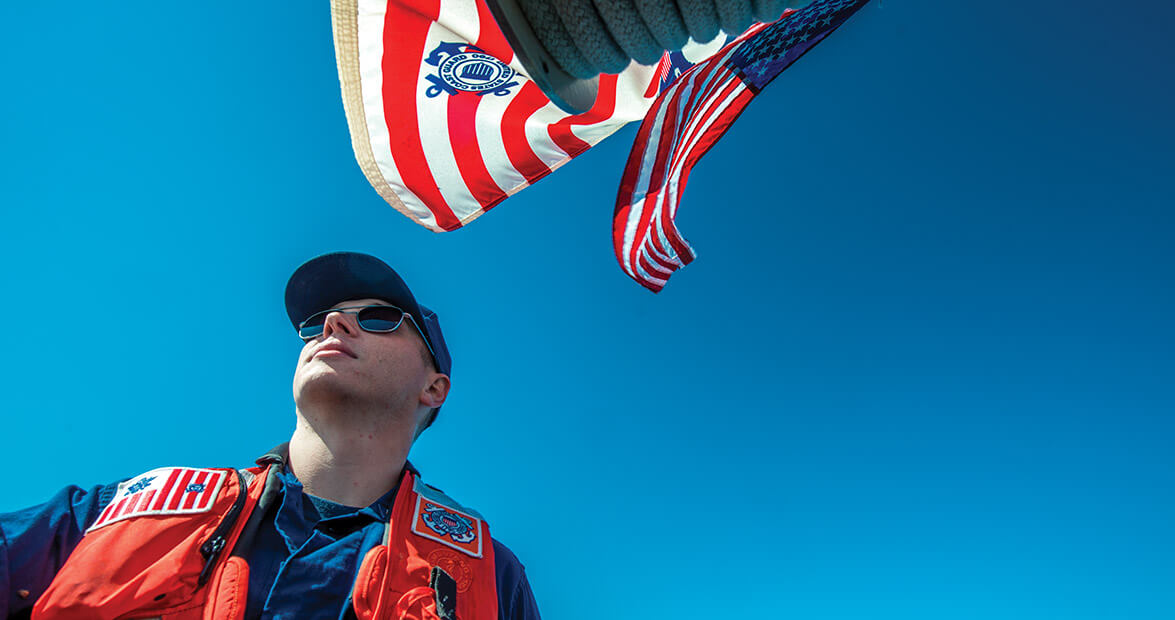 Fourteen-foot waves were crashing against the yacht when something struck its stern, tearing off a swimming platform that stretched from the port to starboard side.

The yacht’s captain, Danny Cruz, said later in news reports that he felt a “huge whomp at the back of the vessel.” Exactly what hit the yacht is unknown, but it quickly started to fill with water rushing through a five-foot-long crack in the hull. The Lady Windridge was taking on 15 gallons a minute.

It was August 2013, 14 miles east of Ocracoke Inlet. A storm was battering the Lady Windridge, a 170-foot white yacht en route from New York to Florida. Less than 100 miles south, Petty Officer Derek Murphy was on duty at Coast Guard Station Fort Macon. He and his shipmates were monitoring the radio that night.

Murphy, a barrel-chested sailor from Maine, joined the United States Coast Guard (USCG) because he needed a job after getting married. He was hoping for a quiet night. Getting a call was never a good thing.

“Every time, something bad has happened or is happening,” Murphy says as he tells the story a year later. “I don’t like to hear it. That means somebody is hurt or can be hurt.” 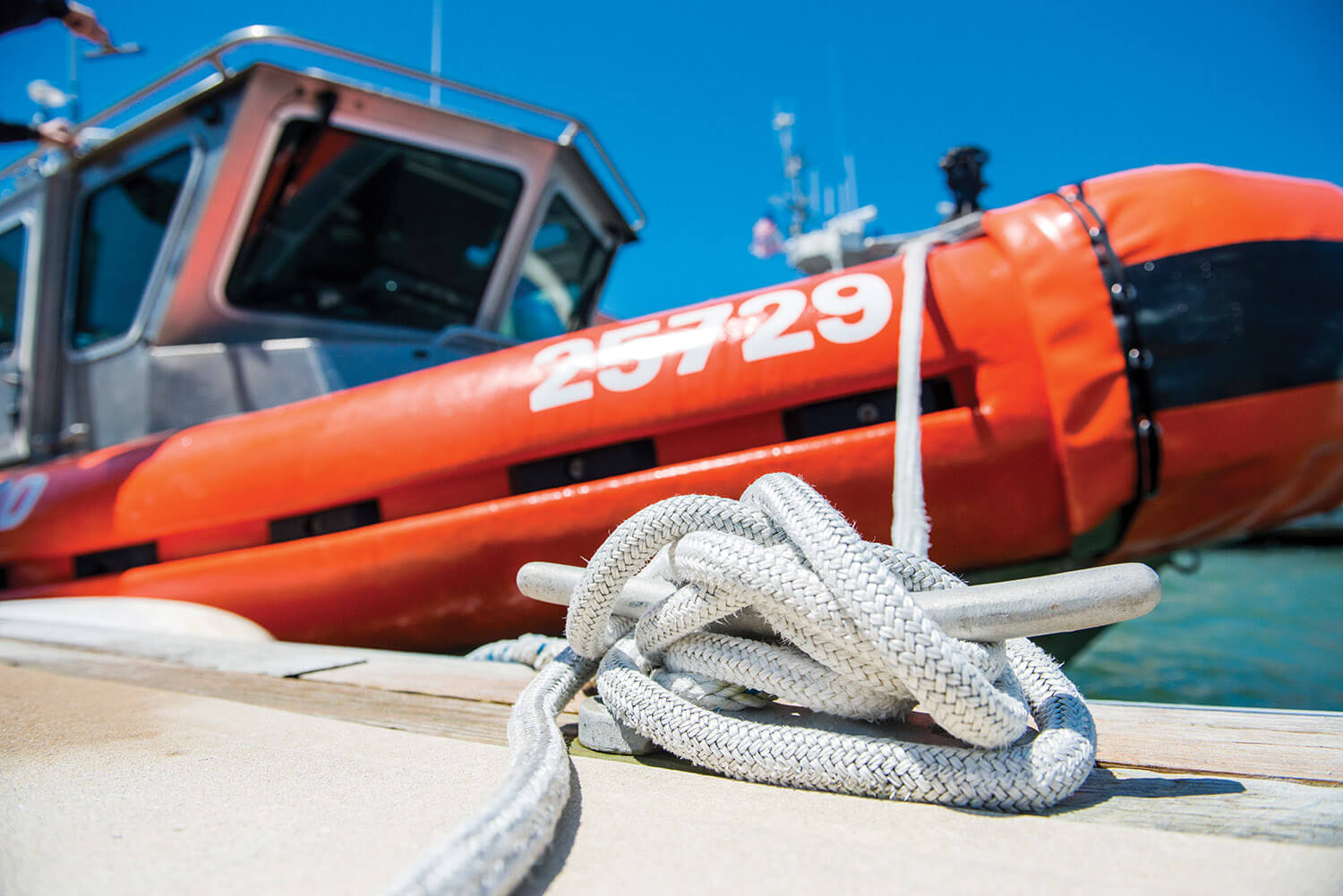 The Coast Guard motto is Semper Paratus, a Latin phrase that means “Always Ready.” Coast Guardsmen up and down North Carolina’s coast venture out when most sailors wouldn’t dare. It was North Carolina-based Coast Guardsmen who saved 14 of the 16 crew members from the HMS Bounty during Hurricane Sandy. But when they aren’t performing search and rescue missions, they’re patrolling the ocean, rivers, and inlets of North Carolina; enforcing federal law; and making sure that boaters are operating their vessels safely.

It was 2:45 a.m. when the Coast Guard Sector North Carolina Command Center got the Lady Windridge’s distress call and relayed it to the USCG stations at Fort Macon and Hatteras, and the USCG Air Station Elizabeth City. A crew member was attempting to fix the swimming platform when a wave drove it into the stern and crushed his fingers.

Murphy and his three crewmates raced to a 47-foot motor lifeboat (MLB) docked at the station and got underway. Rain battered the crew as they cruised through Beaufort Inlet Channel. The gray-hulled MLB is designed and built to withstand heavy seas and winds. If the boat capsizes, it rights itself within 10 seconds, something that gave Murphy and his shipmates some confidence as they rounded Cape Lookout and faced 14-foot waves.

The rain tapered off, but the waves crashed against the MLB. Each wave sent a violent vibration through the hull, and the boat rocked back and forth. Huddled behind the controls in the open bridge on top of the watertight survivor’s compartment, Murphy drove the bow forward toward the Lady Windridge. Seven people were aboard the yacht. Getting the injured crew member off was the first concern as Murphy fought to keep the MLB on course.

“We were thinking we were going to have to remove the person from the boat,” Murphy remembers. “We were a little nervous getting up alongside them [in the rough seas].”

Then, over the radio, word came that a MH-60T Jayhawk helicopter from USCG Air Station Elizabeth City was able to medevac the injured crew member to CarolinaEast Medical Center in New Bern. Murphy was relieved, but he still had to get to the yacht and escort it back to Morehead City. Though the vessel’s pumps were handling the water, the flooding was quickly weighing it down.

After hours of fighting high seas, Murphy got to the Lady Windridge. He could see the swim platform moving up and down as the waves crashed against the yacht’s stern. An MLB from USCG Station Hatteras was already alongside, helping the crew dewater the yacht. The USCG Cutter Elm was also on station to help. With the water pumped out, the Lady Windridge turned toward Morehead City. Murphy and the Elm moved alongside to escort her. It was a slow cruise to safety. After hours at the wheel, Murphy was exhausted, but he couldn’t relax until the Lady Windridge made it to Morehead City.

“When they got hooked up at the dock, we finally felt like we could go home and get some rest,” Murphy says. “When you get back to the dock and you’ve brought that person back and you take them off and you hear a good report, that is probably the best part. When that happens, you feel like you’ve really done your job.” 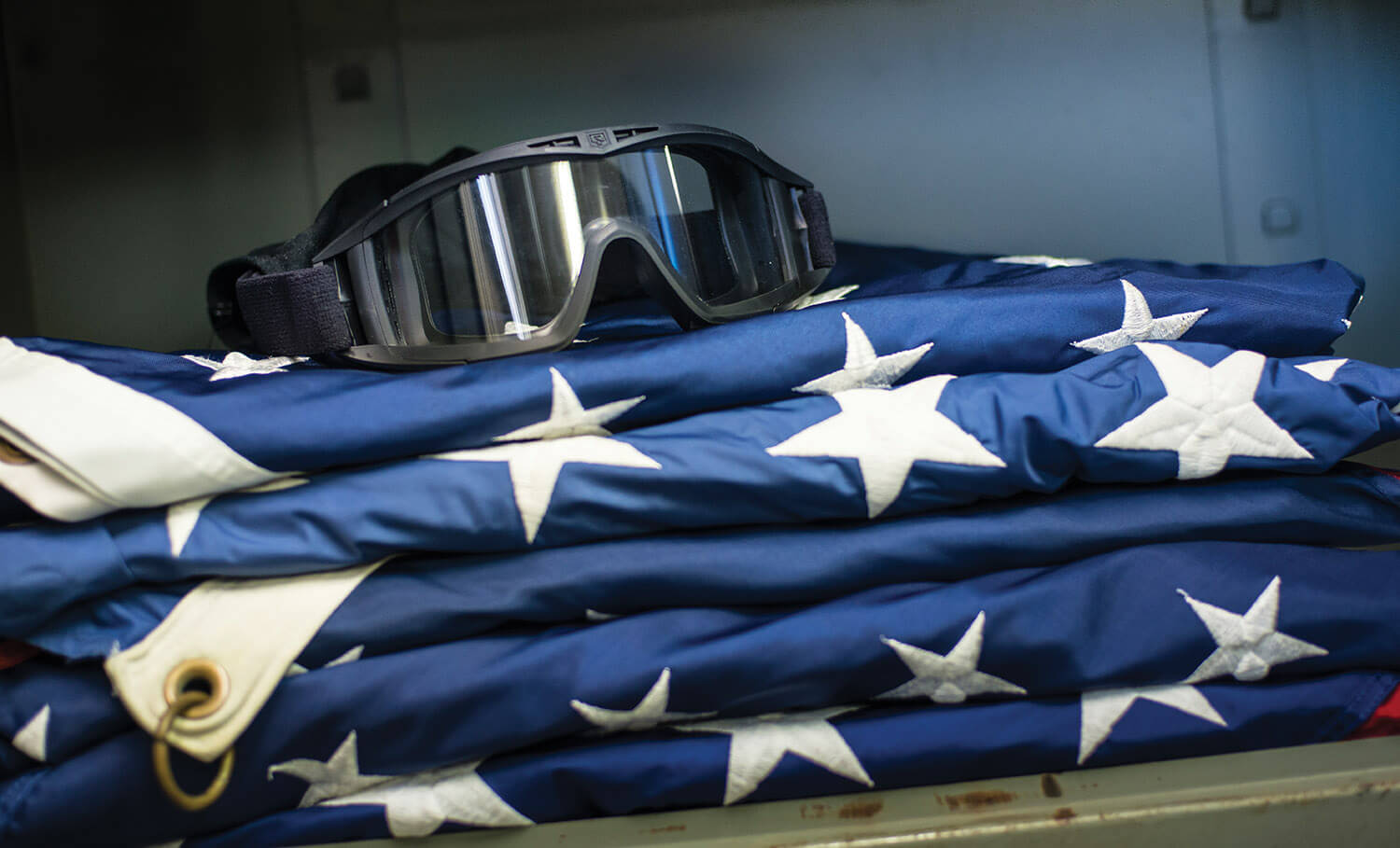 The USCG is the oldest continuous maritime service in the country. Congress created it in August 1790 as a “Revenue Marine.” Its first mission was to collect customs duties, but around 1915, the USCG added search and rescue. The USCG has more than 43,000 men and women on active duty, with slightly more than 1,600 Coast Guardsmen stationed in North Carolina. There are about 30 active-duty Coast Guardsmen stationed at Fort Macon, one of nine Coast Guard stations stretching from the Outer Banks to south of Wilmington.

USCG Station Fort Macon, which covers 50 miles offshore from Pine Knoll Shores to Core Sound, is nicknamed the “Lifesavers of the Crystal Coast.” The station is also home to the USCG Cutter Staten Island and an “aids to navigation” team, which services buoys, jetty lights, and lighthouses.

Summer is the busiest time. After Labor Day, things quiet down except for the occasional sailboat or yacht headed to Florida, Nyland says. But if Murphy could choose, he’d have a quiet shift every time. He likes patrolling the waters around the station, trying to prevent situations that might require a rescue.

“You can’t control everything,” Murphy says. “When we do get those [rescue] calls, we just hope we’re trained enough to be able to pull everything out.”

But Murphy and the Coast Guardsmen at Fort Macon also know a little prevention in the form of safety inspections goes a long way. 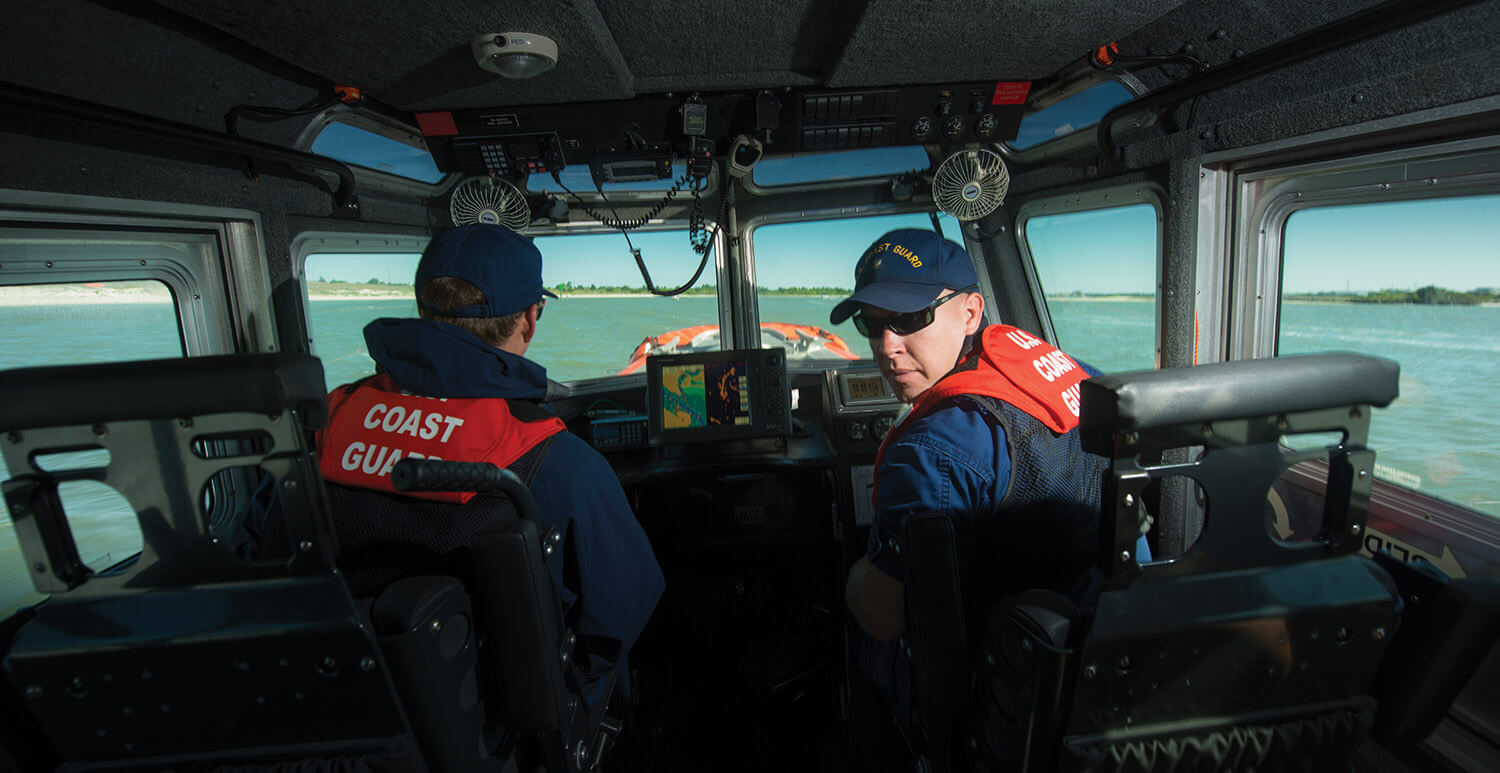 The daily patrol is preparing to get underway. It’s a beautiful spring Saturday, and fishing boats dot the horizon. In addition to Murphy, Petty Officers Third Class Luke Housand and Justin Doades snap on pistols and bright orange life jackets next to their 24-foot special purpose craft.

For Murphy, the Lady Windridge is now just a sea story with a happy ending. Today is when the real work is done.

“I like to do the preemptive strikes and do the boarding to make sure everybody is safe on the water,” Murphy says.

Doades and Murphy will be the boarding party — think of a traffic stop on the water. The goal is to make sure local boaters are prepared if they run into trouble on the water. Housand will drive the boat. A reserve guardsman will help him.

Housand starts the engines and eases the boat away from the dock as Murphy unties the lines. As the patrol boat passes around Fort Macon State Park, Housand increases the throttle, and the twin 225-horsepower outboard motors dig into the water.

The air is still crisp; there’s a slight chill in the water. But the calm seas and inviting blue skies are too much for local boaters to resist. White fishing boats bob along the water, with more headed out to sea. Doades and Housand debate which boat to board first. There’s no probable cause; it’s up to them to select their target.

The first stop is a 19-foot center console fishing boat in Bulkhead Channel near Beaufort. Housand spots the boat as it goes under the bridge that leads to Pivers Island. “We got one coming under the bridge,” Housand yells out.

Doades, standing in the back, peers around the cabin to get a look at the craft.

“It’s gotta have poles,” he calls back.

The boat’s fishing poles are visible, and Housand kicks up the throttle.

Doades leans out to get a good look at the boat as it gets closer.

Housand flicks on the blue police light on top of the cabin, and the fishing boat with two fishermen — both wearing shorts and ball caps — stop their boat. Housand maneuvers alongside, and Doades and Murphy prepare to board. Before they go over, Doades calls over to the captain of the fishing boat.

While Murphy fills out a clipboard full of paperwork, Doades has the fishermen show him the boat’s life jackets and fire extinguisher. The whole boarding is cordial, even friendly at times. Before Doades gets off the fishing boat, he asks what’s biting.

The script is the same for each boarding, including the jokes. The fishermen greet the Coast Guardsmen warmly.

“They’re happy to see us, or indifferent, usually,” Murphy says.

Doades agrees: “Most people know we have a job to do.”

The patrol eventually ends near the Port of Morehead City. Anchored near one of the docks is an open fishing boat with two men. Housand brings the patrol boat alongside, and Murphy and Doades step over into the fishing boat.

One of the fishermen wears a retired Air Force baseball cap. He starts digging out two life jackets and a small fire extinguisher. Murphy checks each item off his list as he fills out the inspection form. Doades checks the extinguisher, giving it a little shake to make sure the propellant hasn’t settled to the bottom. Before Doades gets off the boat, he stops to talk to the fisherman in the Air Force hat. After three stops, Doades has a good idea of what’s biting. It’s his unofficial Coast Guard fishing report, and another way the Coast Guard builds rapport with locals.

“We’re out here every single day,” Doades says. “We really try to relate with them, and it makes the boardings a lot easier.”

The patrol ends around noon. Murphy and Doades hold on to railings on the stern as the patrol boat races back to the station. Fishermen on passing boats frequently wave as they go by.

Housand docks the boat next to the MLB, which will be used the next time a boater is in trouble off the coast. Aboard the MLB is where a new sea story about another dramatic rescue like the Lady Windridge will be born. But Murphy knows that the work from the patrol boat, checking to make sure boaters have the correct safety gear, is what, in the end, will save a life.