Julie nudges the boat away from the dock, and, for the briefest moment, there’s a sense of disconnection. We seem suspended between two worlds — the terrestrial and the aquatic, the tethered and the disencumbered — and then I bump the throttle into gear. The bow lifts gently, and with it our spirits. And a rising sense of discovery. That’s always a part of a journey by boat, even if we’re bound only for the far side of Bogue Sound.

North Carolina boasts 12,331 miles of saltwater shoreline, from the coastal margins of the Outer Banks to the marshy fringes of the state’s five large and several small sounds, and up and down the nearly innumerable bays, rivers, and creeks that lattice the lowlands like a lace doily. That’s a mess of water, more than you could possibly explore in a lifetime, try as you might — and I’ve tried pretty hard.

You don’t have to captain a small ship to experience such an aquatic paradise. In a 20-foot center-console saltwater fishing boat, with no T-top for shade and nary a water closet in sight, I and my mates (family, friends, dogs) have completed all 306 Tar Heel miles of the Intracoastal Waterway numerous times, launched overnight trips from New Bern to Beaufort, Jacksonville to Swansboro, Little Washington to Belhaven, Elizabeth City to Norfolk, Virginia, and day-tripped across a thousand miles of open water and cloistered marsh creek.

We have our favorites, of course. The 120 water miles from the Alligator River at the U.S. Highway 64 bridge south to Beaufort is a doozy of a trip. Wild water, mostly, across the mouth of the Alligator to the headwaters of the Pungo, across the wide Pamlico River and south toward the Adams Creek-Core Creek Canal that connects the fresh water of the Neuse with the brine that flows past historic Beaufort. That’s a run during which you might see a rattlesnake or a red wolf or a black bear, but you are guaranteed miles and miles of blissful nothingness — other than the natural world.

The journey up the Dismal Swamp Canal is another stunner. You start off from the Elizabeth City waterfront and run the serpentine Pasquotank River literally east, west, north, and occasionally south until it spills into the Dismal, leaving you to cruise the ancient canal with its canopied passage reflected in the water below.

Not that you have to have an overnight bag — or even lunch — packed to revel in the possibilities of boating in eastern North Carolina. Julie and I push off from Morehead City’s Portside Marina, point the bow, and open up the throttle — and half the time we don’t even know where we’re headed. The marsh creek behind the inlet? What a great place for a picnic. The back side of Harkers Island, where solitude is nearly a given even on a holiday weekend? I check the wind. Cape Lookout? Cape Fear? The Neuse? The White Oak? 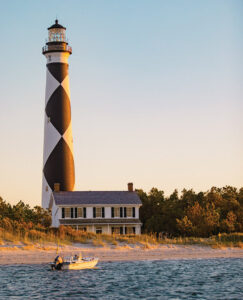 Traveling by boat reveals a new side of North Carolina’s landscape: Famously remote, the Cape Lookout Lighthouse is accessible only by watercraft. photograph by Baxter Miller

They’re all within reach.

Giovanni da Verrazano was only halfway wrong, you see. When the Florentine explorer sailed the North Carolina coast in 1524, he believed that he had found the mythical passage to the Orient, and that a thin ribbon of sand and scrub forest was all that separated the Atlantic Ocean from the Pacific pathway to the Far East. He called this land Annunciata, using the same lofty word that described the angel Gabriel’s announcement to the Virgin Mary that she would bear a divine child.

And it was divine country, for sure. Verrazano overlooked, of course, the tangled pocosins and juniper swamps and pine forests of all of eastern North Carolina. Not to mention the rest of North America. But he had seen a vision of open waters and passages, mile upon mile — or league upon league — of rivers and sounds and seas that looked endless and inviting. Getting there required little more than a boat and a sense of adventure.

He might have been wrong about the easy road to the Orient, but he was dead on the mark with the rest.