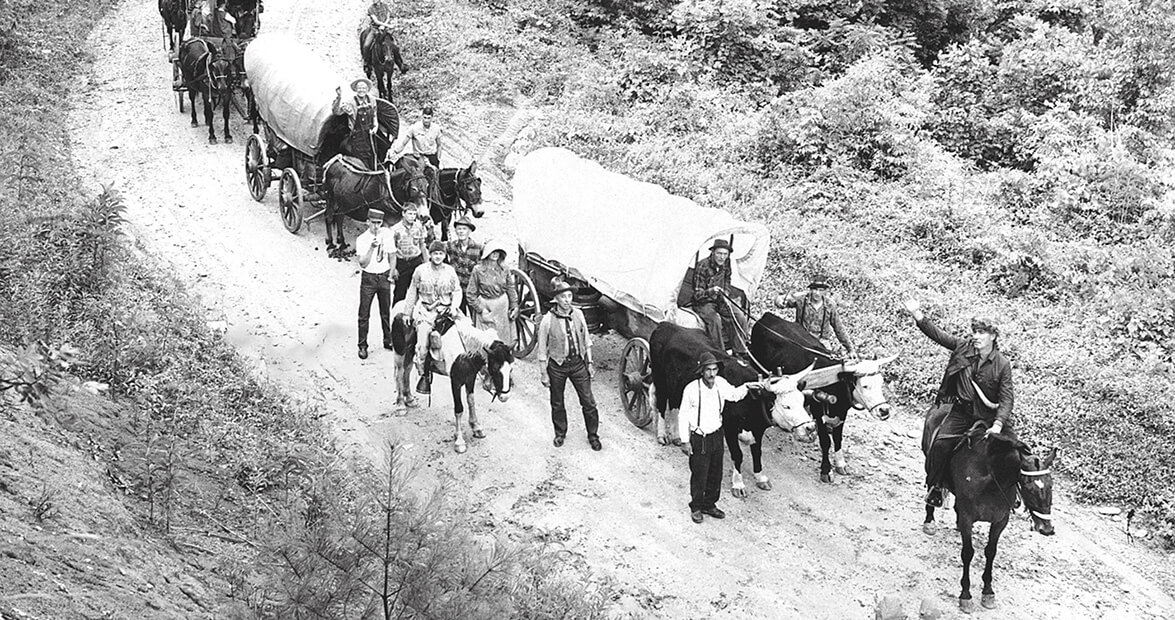 Daniel Boone never wore a coonskin cap. Or buckskin. And when he crossed the Blue Ridge in 1773, he did it on foot and horseback, not in a wagon.

But in 1963, people across the state, including the mountains, were looking for a way to celebrate the 300th anniversary of the charter that created North Carolina. Reenactments of life in 1663 seemed too boring, and anyway, there was barely any activity in that area three centuries before. In Boone, one organizer got an idea: We have an outdoor drama about Daniel Boone. Somebody said they could get a wagon and some oxen. Why not reenact his trip across Wilkes and Watauga counties with a wagon train?

And so, on June 27, 1963, two dozen wagons and 158 people pulled out of Tom Ferguson’s farm in Wilkes County for a three-day, 35-mile trip to Boone. The route followed dirt and paved roads up through Darby, Triplett, and Cook’s Gap, fairly close to the same path Boone himself took through the Elk Creek Valley almost two centuries before. But that’s where historical accuracies end. There’s evidence that Boone was a wagoner, but there’s no possible way that a wagon could have made the trip he completed in 1773. On the modern-day wagon train, men wore beards and buckskin. Women wore bonnets and calico. The fashion was decidedly more 19th-century than 18th.

“As a historical reenactment, it was a big goose egg,” says Randell Jones, whose book The Daniel Boone Wagon Train pulls together stories from the event through its 11-year run. “Back in the ’60s, nobody really knew how to do that.” Accurate historical presentations became more prevalent after the 1976 Bicentennial celebrations. In the ’60s, wagon trains were being held around the country, most of them inspired by a TV show named, simply, Wagon Train. “They were taking all of their information from Hollywood,” Jones says.

But nitpicking the historical accuracy really misses the point, Jones says, because it was more spectacle than reenactment. The actual journey in 1963 was fairly arduous, alternating between heat and rain. Two oxen stopped, couldn’t go any farther, and had to be picked up by a truck. Axles broke. A 9-year-old boy broke his arm after falling off a horse. And the nearly 12-mile-a-day pace wasn’t leisurely. But at night, the party came alive. Hundreds, even thousands, of people showed up in the tiny towns where the wagons set up camp. There was dancing. There was plenty of barbecued chicken. There was a talent show. Doc Watson, who would go on to be a bluegrass legend, played the guitar with his wife. They came in second place.

After fording the New River, the wagons got caught behind car traffic before finally making their way into Boone. The big finale was a parade down King Street in front of what’s reportedly the largest crowd to have ever assembled in the town. “A lot of people growing up in the ’60s had never seen wagons. They hadn’t seen livestock like that,” Jones says. Three newspapers covered the event.

The Daniel Boone Wagon Train was supposed to be a one-time deal. But after seeing the crowds, the wagons, the costumes, and the excitement, people started to wonder, Why don’t we do this again?

In 1964, the wagon train attracted three times as many people, added a day, and started farther from Boone, in North Wilkesboro. Swearing and drinking were expressly banned. Five thousand people saw the travelers off. Even more people cheered when they arrived as part of the Fourth of July parade in Boone. In 1965, they did it again. And again the next year. Shop owners would spruce up their storefronts. People used the event to help raise money for projects like new roofs for churches or community centers. In 1969, the train was the biggest yet. But it was starting to lose its luster. Chief Scout Ivey Moore, who relished his role as a ceremonial Daniel Boone, decided not to come back that year. Town leaders in North Wilkesboro started to complain about the smell and the droppings the animals left behind. Newspaper reporters, who at first would embed themselves on a wagon for the entire trip, stopped coming, or only provided a few paragraphs about the event. Riding clubs started to show up along with wagoners. “They were groups of men without the civilizing influence of women,” Jones says. They were loud. They drank. “It started off as a family event,” he says. “It just got rowdy.” The shift in culture in the late ’60s also started to take its toll. The Civil Rights Movement was in full swing. So was the Vietnam War.

In 1974, organizers called it quits. The Daniel Boone Wagon Train hadn’t changed much. The world around it had. “The innocence of a wagon train seemed a little out of place,” Jones says. “It didn’t seem like fun anymore, I guess.”

There was a revival in the 1980s, but today, there’s not much physical evidence that the wagon train ever existed. Pictures are locked up in archives. No traces of the route are visible on the back roads in Watauga and Wilkes counties. Boone and North Wilkesboro have grown and changed. Most of the people involved are dead. After such big celebrations for the 300th anniversary of the charter that created the Carolinas, the 350th, in 2013, passed with barely a peep. Jones, who’s written a lot about the wagon train and Daniel Boone’s life, has a theory: People sort of remember things that happened 40 years ago. But once you hit 50, it’s a completely different generation.

He does have a favorite moment, from a 1964 newspaper report. On the same afternoon that Lyndon B. Johnson signs the Civil Rights Act, a white woman and a black woman are having a conversation at the wagon train camp in Darby. One’s mother was a midwife. The other one knows her. They slowly discover that they have a lot in common. They “chatted like Magpies,” the reporter wrote. In the moment, it seemed, the history all around them faded away.