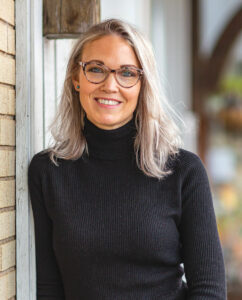 Brooke Reale traded Florida for Franklin when she moved to North Carolina in 2018. photograph by Tim Robison

When Brooke Reale was a kid, her family would vacation in North Carolina, traveling from their home in Florida to the cabins in Franklin that her relatives had owned since the ’60s. They would stop for peaches and boiled peanuts on the way, and once they got to Macon County, they often panned for gold and gems, and visited Mason’s Ruby and Sapphire Mine for souvenirs.

In 2008, Reale’s parents moved to Franklin permanently. A decade later, she and her husband, Rob, followed suit, trading their busy lives near Tampa for a small, tight-knit mountain community. “Where we’re from, you could fall over on the street, and people would walk over you,” she says. “Here, people would give you the shirt off their back.”

In Franklin, the Reales bought Kitchen Sink, Inc., a kitchen supply store that’s been a downtown staple for two decades. They put in a computer system and made the aisles more accessible, but they also took care to maintain the sense of inclusivity that continues to draw people in and encourages them to linger over conversations. “In Florida, you would rush around and [hope that] you were going to have enough time to live your life one day,” Reale says. “Here, you’re able to work and live your life. This is the most gorgeous place that we’ve ever been. We live where people vacation.”

Motor Company Grill. With its red vinyl booths, teal and red walls, and checkerboard tile floors, this 1950s-themed diner is a throwback to the time when its building housed Conley Motor Company. After finishing a Big Bopper hamburger — with bacon, Cheddar, and onion rings — or a kids’ favorite like the “Love Me Tenders,” diners cozy up to the soda fountain for a milkshake, ice cream, or a root beer float from the “Winner’s Circle” menu.

Caffé REL. Caffé REL occupies the same building as a Hot Spot gas station, but you’d never know it from the cozy, European-inspired decor and dishes like local rainbow trout, French pot roast, and filet mignon sandwiches. “[Richard Long] is a highly accredited chef, and there are people who come from all around just to come to Caffé REL,” Reale says. The restaurant serves wine, but if you prefer beer, “you can buy your beer in the Hot Spot and bring it back to Caffé REL, and they’ll get you a glass and everything.”

Root + Barrel. Chefs at Root + Barrel use local ingredients to create a menu that blends Southern and international cuisines, including dishes like honey-and-Cajun-seasoned pork tenderloin, red pepper shrimp with risotto, and mushrooms and gnocchi, which diners enjoy alongside craft cocktails and regional beers and wines. 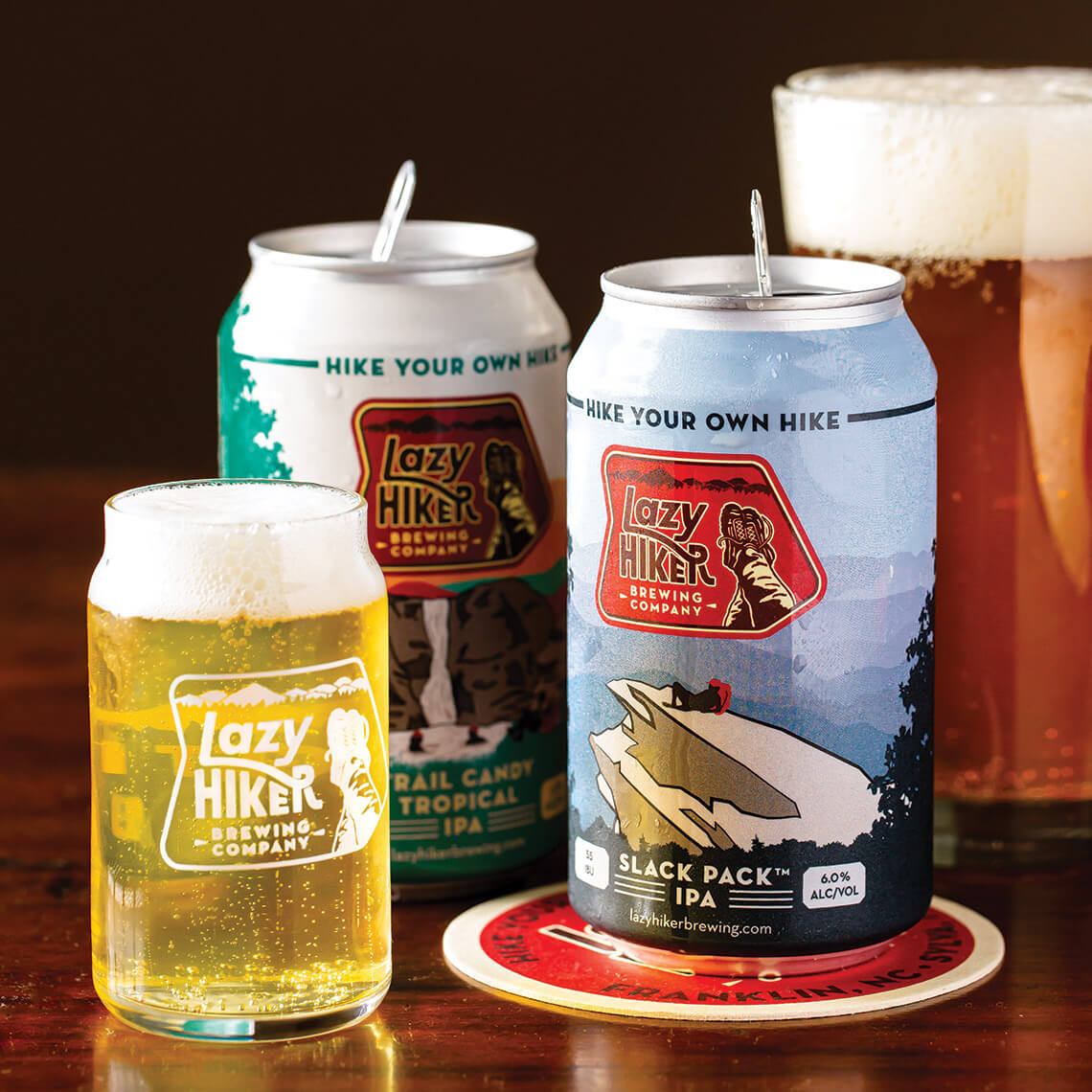 Lazy Hiker Brewing Company. Franklin’s first brewery, which opened in 2015, is popular among hikers on the nearby Appalachian Trail for its refreshing beers like the Trail Mate Golden Ale and Slack Pack IPA. The truck bay of the former fire department and town hall building now houses the brewery’s taproom, where live music is played on the indoor or outdoor stage every Saturday.

Currahee Brewing. The brewery, located alongside the Little Tennessee River, makes all its brews in-house. Visitors can enjoy a glass of wheat ale with notes of peach or a citrus-and-pine flavored IPA from a lounge chair in the beer garden with a riverside view. Owner Brandon Hintz hoped to honor the U.S. armed forces and the Eastern Band of Cherokee Indians by using their word currahee or “stand alone.” Keep an eye on Currahee Brewing’s event calendar — the business often hosts live music events, food trucks, and music bingo.

Fish Tales Fly Fishing. A mannequin dressed head-to-toe in fishing gear welcomes visitors at the front door of this shop, where possibilities for adventure await. Here, seasoned fly-fisherman and newbies alike can find all they need to prepare to cast a fly — a starter rod and reel for beginners, a chest pack for avid anglers, or a guided trip along the Nantahala or Tuckaseegee river with a mentor from Fish Tales for those eager to learn. 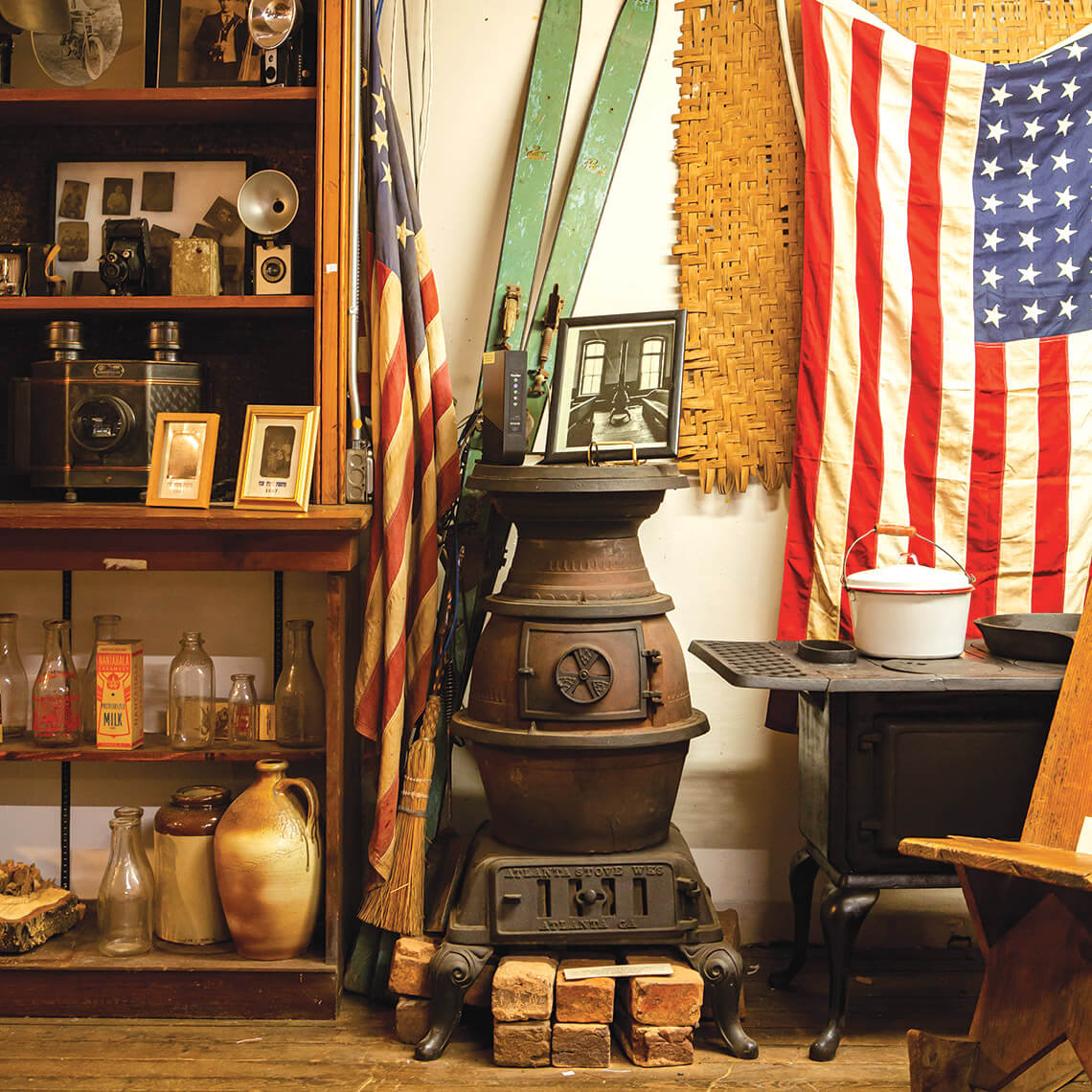 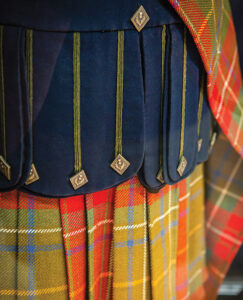 The Scottish Tartans Museum and Heritage Center. Since 1988, this museum has educated visitors about traditional Scottish Highland dress through history exhibits and around 650 officially registered tartan patterns on display. Visitors can even take home hats, ties, or scarves in the blue, red, black, and yellow tartan created especially for Franklin and registered in 2005.

Franklin Gem and Mineral Museum. Located in the 1850 jailhouse, this museum has one of the largest gem and mineral collections in the Southeast, with more than 5,000 specimens, including locally mined quartz, garnets, and rubies. The museum is run by volunteers in the Gem & Mineral Society of Franklin, which celebrated its 50th anniversary this year.

The Attic Antiques. Vikki Luft has been running her antiques business in Franklin for about 11 years. It has become a popular spot for people to socialize, as well as find vintage, antique, and upcycled furniture, decor, and more.

Silver Threads & Golden Needles. A self-proclaimed “friendly and fiber-obsessed” yarn shop, Silver Threads & Golden Needles’ walls are lined with skeins of colorful yarn in a variety of sizes and materials. The shop’s seasoned makers offer lessons for beginner yarn spinners, crocheters, knitters, and weavers. Silver Thread also hosts social group events, including the “Knitter’s Roundtable” and “Sit and Spin” for those who have projects to start or finish up.

Crabtree General Store and Coffee Vault. Rocking chairs and a piano on the front porch overlooking downtown Franklin serve as a warm welcome to shoppers. This store and café offer a wide selection of specialty gifts and food items, including original and flavored coffees, hand-dipped ice cream (try the popular chocolate truffle flavor), wooden postcards, and tea towels. Enjoy a treat on the porch or order a coffee to-go from the drive-thru for a quick caffeine fix. 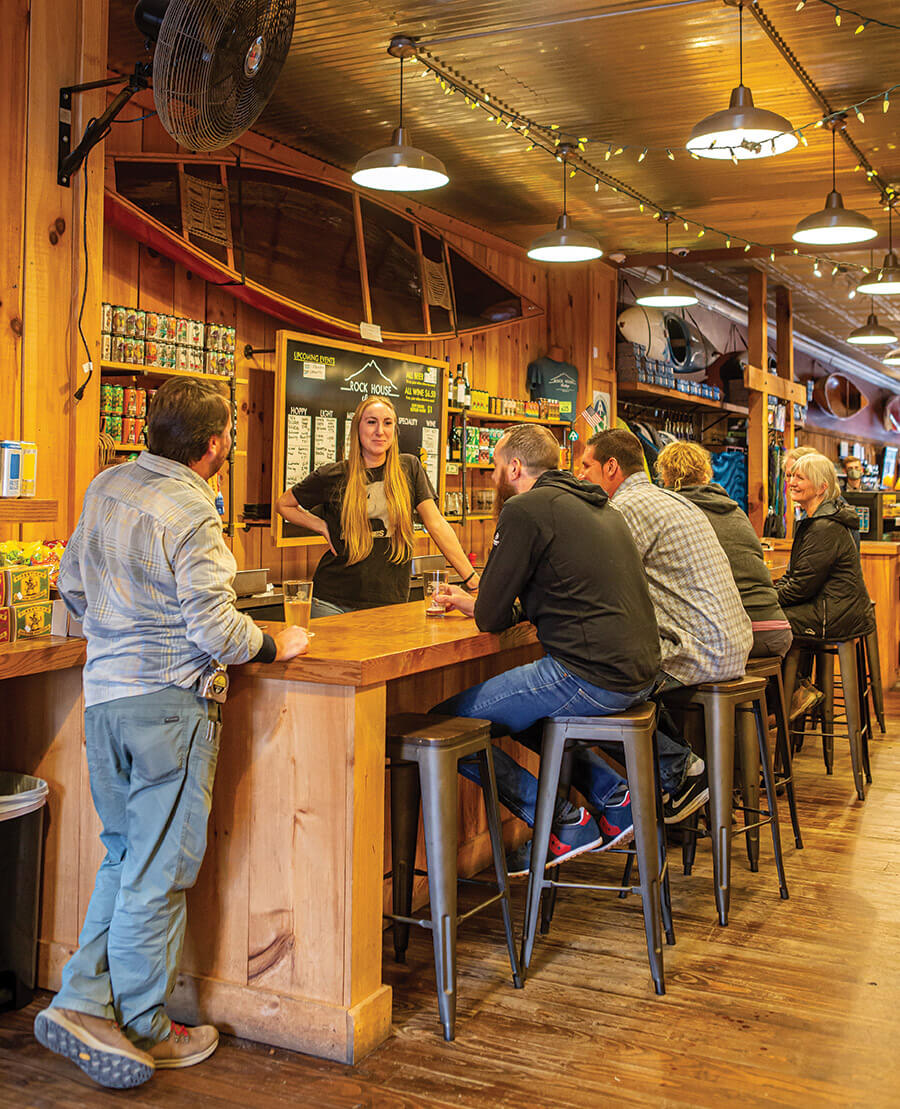 Shop for hiking gear and grab a locally brewed beer at Outdoor 76. photograph by Tim Robison 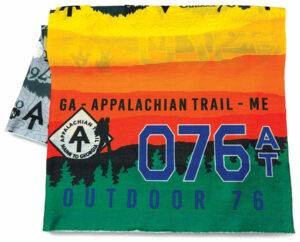 Outdoor 76. This outfitter provides more than clothes, shoes, hiking poles, and freeze-dried food: When activity on the Appalachian Trail ramps up in the spring, its downstairs area opens for hikers to store their bags and do laundry while they grab a locally brewed beer from the bar and play shuffleboard or darts in the back of the shop. At this point on the trail, many hikers are looking for a footwear upgrade, too: “They’ll actually fit you with the perfect shoes for your feet to go hiking,” Reale says.

Uptown Gallery. This volunteer-run art gallery was opened more than 25 years ago by the Macon County Art Association, which is celebrating its 60th anniversary this year. The gallery displays the work of 39 local artists in media that ranges from landscape and abstract paintings to sculpted pottery and jewelry. For visitors who want a more hands-on experience, Uptown Gallery holds monthly workshops on topics including fused glass, watercolor, encaustics — painting with pigmented beeswax — and kids’ art classes. The gallery has a new show every eight weeks — check out their holiday exhibit that will run from November 6 through the end of December.

North Carolina Mountain Made. Customers who walk in through the French-style front doors of this two-story shop are greeted with a large assortment of quilts — all of which were handmade by local sewers. But the shop sells more than quilts, too: handmade and vintage western North Carolina treasures from 50 artisans from Asheville to Murphy fill the store. Owner Linda McKay uses antique crates and jugs as a canvas for her contribution to the store’s goods, and her latest project features a sunflower on a cabbage cutter.

Trail Mix. Owners Marie and Nick Roberts left their life in Boston to reunite with nature by traveling in a camper van. Seven months into their adventure, they decided to make Franklin home. Last June, the Roberts opened Trail Mix — a gift store designed for kids on one half and for adults on the other half. Pick out a mini plush fawn to play with or a book, such as Goodnight Bear, on one side of the store, and choose a piece of handmade jewelry on the other.

April’s Flowers on Main. Once a pool hall, a storage center for car parts, and an art gallery, this building is now only filled with the sweet smell of fresh-cut flowers. This florist has been voted best in Macon County for 11 consecutive years since its opening in 2011, and it prides itself on designing fresh flower and silk arrangements for locals and out-of-towners. 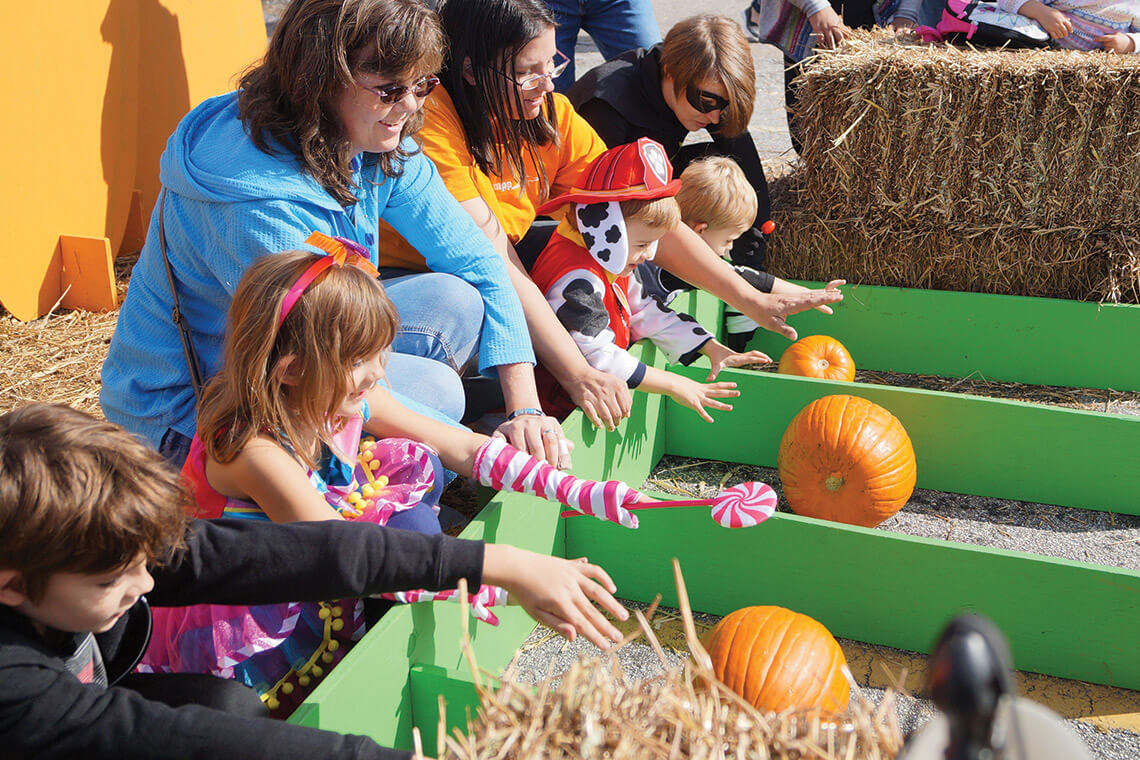 Photography courtesy of Town of Franklin

For 25 years, more than 10,000 people have gathered downtown on the fourth Saturday in October for PumpkinFest. The street festival includes fun activities like a costume contest, a parade, more than 80 food and craft vendors, and the World-Famous Pumpkin Roll, in which participants can purchase a pumpkin (or bring their own) to roll down Phillips Street in hopes of winning the $100 grand prize.