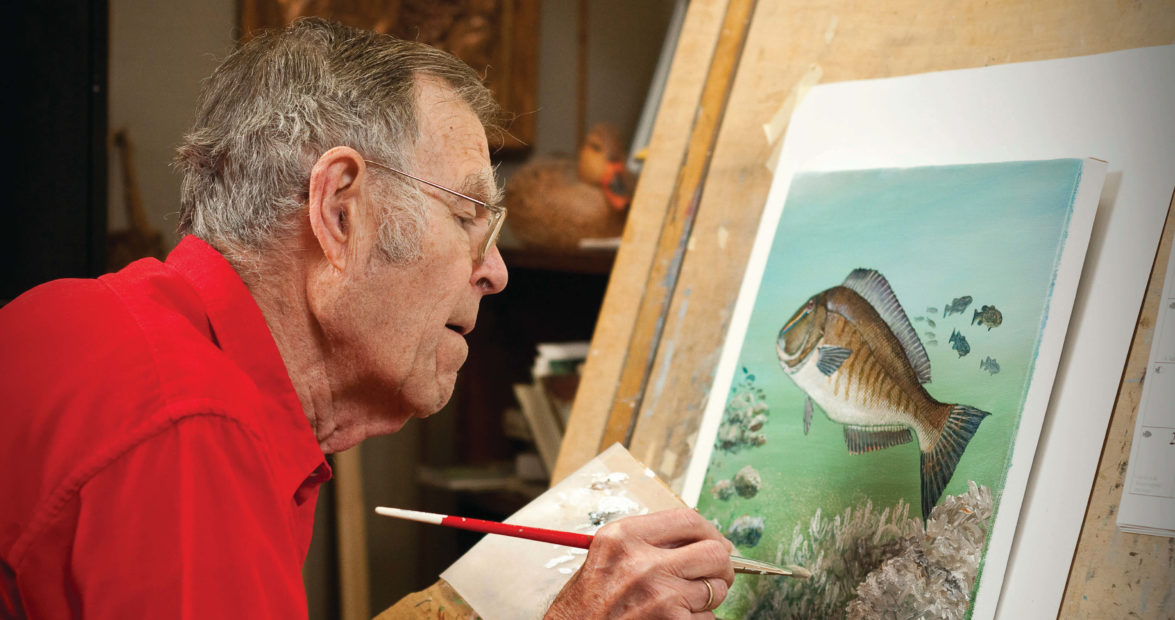 Duane Raver once caught a state-record white crappie. At least, it may have been a state record. He’ll never know for sure because he didn’t submit it to wildlife officials for certification. In fact, he didn’t even take a photo of it. Instead, the then-19-year-old angler brought it home, plopped it on the kitchen table, and drew a sketch of it. The sketch is the only record Raver has of the fish. But that’s all the award-winning North Carolina wildlife artist needed in order to bring it back to life on canvas.

More than 60 years later, Raver still re-creates wildlife through art. Today, despite contending with a cold, he’s painting a small watercolor rainbow trout for a customer. At 83 years old, Raver would prefer not to work on weekends anymore, but he has a long list of orders to fill. When he finishes the commissioned pieces, Raver will start producing original works of art to sell at the North Carolina State Fair.

Raver, along with Mary, his wife of almost 56 years, has a booth every fall at the Village of Yesteryear. It’s the only art event he takes part in. Since first attending in 1979, Raver has developed a following and most of his work sells out early, which is why he has to prepare inventory well in advance.

“The last three months — I have never had a three-month period like that. It just was wild, absolutely wild,” Raver says, shaking his head in amazement. “I’ve never had this number of requests for odds and ends, fish, boat paddles, small paintings.”

Raver’s art studio is located at the end of a gravel road in Garner, just a short walk from his home. His drawing board sits in front of a small window that faces his daughter’s house. A calendar, some notes on scrap paper, and the almost-finished rainbow trout are secured to the board with little pieces of masking tape. Except for a few brush strokes where Raver has honed his brush point, this drawing board is remarkably clean. No paint and, seemingly, no time have been wasted.

Raver doesn’t paint anything just for himself or his wife. In fact, the Ravers only have three of Duane’s original paintings on display in their home. The demand for his art is a result of his deserved reputation as one of the best wildlife artists working today. But it’s also due in part to the problem he has with telling people “No.”

“I hate to turn opportunities down. Oftentimes, I’ll say, ‘Yes’ and then think, ‘Now, what in the world did I commit myself to?’” Raver says. “But I rarely will turn things down unless I just flat know that I cannot do it. I don’t want to do a bad job or even a mediocre job if I can avoid it.”

Swimming against the current

Duane Raver Jr. was born on May 4, 1927, in Newton, Iowa. His mother liked to say she could always remember his birthday by referencing Lindbergh’s Paris landing just days afterward.

Raver grew up, like many children of the Great Depression, spending a lot of time outdoors, hunting and fishing. During the warmer months, he would typically wet a hook at least once a week, bringing his catches home to paint or draw, before they ended up in the frying pan. Raver spent hours upon hours intently studying his subjects, learning the lines of the mouthparts of each fish, examining the subtle differences in the eyes, then trying to recreate them.

In high school, Raver enrolled in his first-ever art class, excited to be able to take his burgeoning talent to the next level.

“My teacher said, ‘Look, I just don’t believe you’re ever going to develop this. You better select something else for your vocation,’” says Raver with a chuckle. “I didn’t impress her at all. Apparently I didn’t do it like she thought it should be done.”

That was the last art class he ever took. He went on to pursue a degree in Fishery Management at Iowa State University and maintained his artistic studies as he always had — learning on his own by trial and error. Summertimes, he worked in a fish hatchery.

“I was around fish all the time, every day, for 10 hours a day,” Raver says. “When we got through working, then we went fishing.”

After graduating in 1949, he got a call from North Carolina that would change his life. An old friend was moving to California and thought Raver would be perfect to fill his position with the North Carolina Wildlife Resources Commission. Raver made a quick decision, loaded up his 1948 Ford and drove to the Tar Heel state.

The Commission had just been formed in 1947, and Raver essentially got in on the ground floor. Hired as a fisheries investigator, his job was to survey lakes, reservoirs, and farm ponds, which he did with help from a team of students from North Carolina State University.

His colleagues soon discovered his artistic talent, and he was asked to create a cover for the Commission’s magazine, Wildlife in North Carolina. After the walleye chasing two gizzard shad was published, Raver started getting more requests from the magazine and found himself employed as both a fisheries investigator and an artist.

“I had to wear two hats very carefully. I dared not do too much artwork and not my regular job in the fish division,” Raver says. “I’d just turn around at my desk and do the artwork and then turn around and do the fisheries.” Overwhelmed by trying to balance two jobs, Raver eventually resigned his position as a fishery biologist in 1960 and went to work full time for Wildlife in North Carolina.

He worked his way up the publishing ladder to managing editor and then to editor of the magazine before retiring in 1979 to pursue freelance artwork.

As a freelancer, Raver has painted covers for outdoor and wildlife magazines across the country and illustrated fish guides for several states. He was given the honor of painting prestigious wildlife stamps. His mother collected all of his magazine covers and presented them to him in three photo albums — filled with more than 200 covers altogether.

One of the most comprehensive collections of Raver’s work can be found in the 1984 book Fisherman’s Guide: Fishes of the Southeastern United States, written by Dr. Charles S. Manooch III, a fisheries scientist from Morehead City. It contains 150 original color illustrations painstakingly created by Raver.

With all the technological advances in photography, photo-editing, and graphic design, it would seem almost inevitable that Raver’s commercial work might go the way of the Carolina Parakeet. But actually the opposite has happened. In 2007, Fisherman’s Guide: Fishes of the Southeastern United States was printed for the fourth time. More recently, a collection of Raver’s fish paintings became an iPhone application for saltwater anglers wanting to identify their catch while still on the water.

Incredible accuracy is a major reason Raver’s art has remained in demand. For fish, he counts scales and spines, and gives particular attention to the eyes and mouthparts. He is equally detailed when it comes to birds, counting feather patterns and making sure everything, including the setting, is authentic. Often, paintings are more precise than a photograph.

“It’s difficult to get a really good photo that shows exactly what a fish looks like a lot of times unless someone is holding it in their hands, and you don’t always want to run a photo of somebody holding a fish in their hands,” says Wildlife in North Carolina editor Greg Jenkins. “The way to show what a fish really looks like is to show a Duane Raver painting of it. He’s just unfailingly accurate.”

Bringing animals back to life

After decades of painting fish, Raver still loves to catch them and tries to at least once a week. He examines the fish that he pulls from local ponds, but he no longer brings them home to paint. Instead, Raver depends on his sketches, many of which, like the hefty white crappie, date back to the 1940s. He also relies on preserved specimens from the North Carolina Museum of Natural Sciences.

When his subjects are feathered, Raver employs photographs he’s taken at wildlife refuges such as Mattamuskeet or Pea Island. For details, he keeps a collection of preserved wings in a file cabinet next to his drawing board, and he can refer to several duck and goose taxidermy specimens that hang nearby in suspended animation.

Whitetail and mule deer, bears, wild turkeys, and beautiful African game animals line the walls of Duane Raver’s studio from floor to ceiling, looking like they’re ready to pounce or take flight at a moment’s notice. There’s even a real giraffe, or more precisely the preserved head and neck of a giraffe, standing next to the front door. The mounts were created by Raver’s daughter, who owns the taxidermy shop where Raver’s studio is located.

Of his three children, his daughter Diane Braswell followed in her father’s wildlife artist footsteps. After graduating high school, much to the surprise of her parents, Diane enrolled in taxidermy classes at Piedmont Technical College. She’s been working as a professional taxidermist since 1977. Raver says his daughter approaches her taxidermy with his devotion to detail.

“She has to bring each animal back to life and really that’s almost the same in my case. I’ve got to bring that particular fish or bird or mammal back to life,” Raver explains. “If it doesn’t have life, that’s it. It’s not usable.”

There are some projects that Raver will turn down. He does not use his daughter’s African mounts simply because he will not paint African big game animals. He also refrains from painting other subjects such as whales, dogs, and portraits of people.

Raver has been named “Wildlife Artist of the Year” four times by the North Carolina Wildlife Federation. In 2003, he was inducted into the Federation’s hall of fame. Despite all the accolades and honors, which include The Order of the Longleaf Pine bestowed by the state of North Carolina in 2009, Raver remains extremely modest about his talents and repeatedly downplays any accomplishments.

After more than 60 years of painting North Carolina wildlife on an almost daily basis, the constant challenge of correctly rendering intricate details keeps him going. He says that has always been the impetus for his painting, ever since he was a boy. That, and his unceasing love of wildlife.

“He’s such an amazingly talented artist with that scientist’s eye for detail,” says Jenkins. “He’s got to be known as one of the greatest wildlife artists this state has ever known. Especially if you talk fish, I don’t know that there’s anybody that could claim to be any better than Duane either currently or in the past. I think that will be his legacy.”