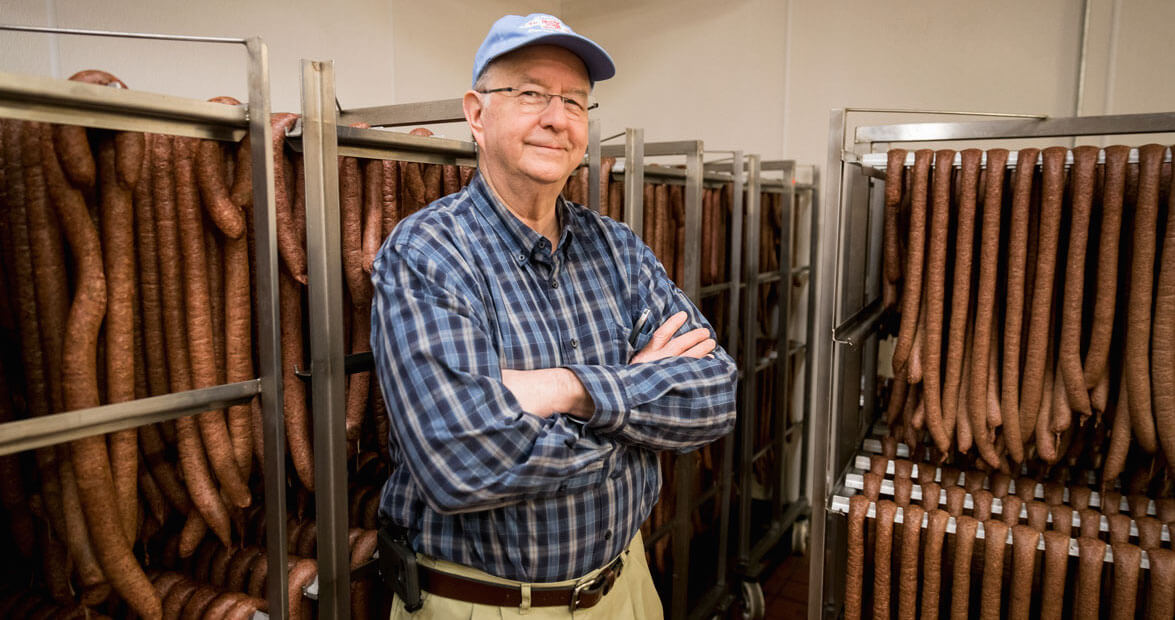 It’s not often that you see sausage being moved with a shovel. Granted, it’s a squeaky-clean shovel. Sterile, most likely, since the sausage-stuffing room in the frigid corridors behind the meat counter at Smith’s Red & White grocery store is cold enough to give you double-decker goose bumps. But you have to admit: When there’s a heap of ground pig, sage, salt, and red pepper so large you can’t move it with a long-handled ladle, it’s a noteworthy pile of sausage.

In fact, this hillock of hog I’m gazing at might be the most beloved mountain this side of North Carolina’s fall line. Because the people who love the fresh sausage at Smith’s Red & White love it with a legendary fervor. They love it so much that the grinders at Smith’s have to grind 10,000 pounds of the stuff a week. A week. Each week during the holiday rush — from the week before Thanksgiving through New Year’s Day — upward of 35,000 pounds of sausage is ground, wrapped, sold, and carted out of tiny Dortches, just up the road from Rocky Mount. Show up the week of Christmas, and you’ll find a line of sausage fans snaking through the grocery store nearly to the parking lot, kinked up around the aisles like, well, sausage.

Like I said: A shovel-worthy pile of ground pig is deserving of marvel. As is this country grocery store, which has grown in size and popularity.

Smith’s Red & White is tucked off the east side of Interstate 95, at the exit for Dortches and Red Oak, in a strip shopping center between a gym and a small bakery. Its siren song is a set of tall storefront letters that proudly spell out, “PORK CENTER.” Begun in the 1920s, “Red & White” was a small chain of independently owned rural grocery stores with centralized buying and distribution. The franchise has since faded away, but stores like Smith’s — and King’s Red & White Market in Durham — have kept the colorful moniker so beloved by locals.

I show up at Smith’s Red & White sometimes twice a week, and, without fail, I cruise the meat counter. And by “counter,” I mean a display of protein fabulousness half a football field long. On the day of my most recent visit, there are no fewer than 23 different cuts of pork for sale — I counted each and every one — from pork tails to neckbones, and everything in between: pork feet and tenderloin, Boston butt and picnic ham, at least four kinds of chops, smack bones, and even souse meat.

The store opened in 1954, in a corner of the old Dortches schoolhouse, the accidental brainchild of Sherwood Smith. “My daddy was a long-distance trucker,” says Bruce Smith, 67, president of Smith’s Red & White. “He needed to be by a telephone so he wouldn’t miss calls for hauling jobs. So he figured if he was going to sit around and wait, he might try to sell a bit of feed and seed and that kind of stuff.”

Turned out that folks around Dortches needed “that kind of stuff.” And they needed gas and groceries, and a place that would slaughter a hog or two. “Kept growing and kept growing,” Smith says, grinning. Today, the 20,000-square-foot store is at least the sixth iteration, built on the same patch of farmland that housed the original. And the third generation is on the clock — Bruce’s son Derrick is the vice president, and you’re just as likely to find him cutting beef as cutting checks.

Or spareribs. Or pork steak. A sister restaurant located next door — itself worthy of a long drive for breakfast or lunch — helps keep demand high. The list of down-home dishes includes the entire Southern food pyramid: chicken salad, pimento cheese, collard greens, rutabagas, meatloaf, meatballs, and country ham, plus cakes and pies that fill an old-timey round case.

Out of sight, behind the butcher shop and deli counters, the stoves and ovens simmer nearly constantly. Smith’s Red & White cooks 800 pounds of barbecue each week, along with chicken pastry and Brunswick stew. “And just one of those big kettles over there,” Smith says, pointing to a trio of gleaming stainless-steel urns, “can cook 300 pounds of chitlins. Sometimes we’ll cook 1,000 pounds of chitlins in a day.”

But it’s not just the big numbers that impress here. A place like Smith’s Red & White is a cultural crossroads. Its location, just a sweet tater’s throw from the interstate, draws folks from regions where you couldn’t find a country ham biscuit in a month of Sundays. Folks from north, west, and even the Far East show up in Dortches with an open mouth, and three generations of Smiths hope they leave with an open mind.

Such culinary diplomacy is a lot to ask of a pig. But then again, you get your choice of mild or hot. Dry or fresh. Country sausage or link sausage. There’s a certain egalitarian aspect to Smith’s Red & White’s approach to pork: If you can make it from a hog, wrap it up. Somebody’ll take it — by the shovelful.