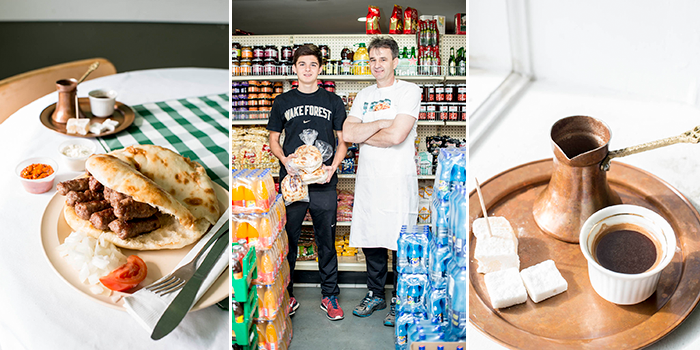 Bread and filling and maybe a condiment — everyone knows what a sandwich is, to begin with. But there are layers: The dish changes when you look at it through the lens of a different culture. Ingredients vary among regions. Individual chefs deploy unique approaches. You see a sandwich from the outside, and it looks familiar, but it takes biting in to understand. A sandwich is a neat little package of cultural discovery.

Tom Hanchett, the staff historian at Levine Museum of the New South in Charlotte, knows that moving out of an established comfort zone can be hard. But, he says, our culture today is “a coming together of the new folks and the old folks. This is who we are now. How do we get to know each other better?”

The answer is food. “Our state today is fried green tomatoes,” Hanchett says. “It is eastern versus western barbecue. And it’s also where to find the best torta.” On a drive through Charlotte’s Plaza-Midwood neighborhood, Hanchett points out restaurant after restaurant owned by people of different nationalities who feel welcomed here and have found a place to thrive. Central Avenue is an international corridor, an example of what he calls “salad-bowl suburbs” — where immigrants of many different origins set up shop side by side, rather than in distinct, ethnic neighborhoods.

Hanchett is occasionally involved in Taste of the World food tours in Charlotte, and he takes many hungry visitors to Bosna Market, a small grocery store that sells Bosnian and Central European food products. Through an open doorway and down a few stairs is Euro Grill & Café, where Dino Mehic serves c´evapi, or small sausages — minced meat grilled as kabobs — on soft, spongy pita called lepinje. You can add chopped onion or sour cream if you want to, or not — the sandwich stands on its own.

Mehic, a Bosnian refugee, came to the U.S. in 1998 and brought with him a lifetime of experience with food. “C´evapi is traditional Bosnian food No. 1,” he says. “You can’t go to Sarajevo without trying c´evap.”

“I’m not an adventuresome eater, so I tend to get things close to what I already like,” Hanchett admits. “The c´evapi is basically a sausage sandwich — I’m from the Midwest, and I have a hard time finding a good sausage sandwich.” Plus, he says, “You can’t go wrong with a sandwich. It’s a good introduction to things. It’s less expensive, and smaller portions.”

The dish is not yet familiar to many Americans, but Mehic, one of the only Bosnian restaurateurs in the state, has brought it here and made it accessible.

And that’s good news for North Carolinians. Food is often about giving and receiving, but when you eat to learn something, when you look for food that tells the story of a culture that’s not your own, you realize: If food speaks many different languages, a sandwich is like Esperanto. It’s just familiar enough to make you feel safe and comfortable, and so simple that the possibilities are nearly endless. A sandwich is an affordable way to travel around the world. A sandwich is a shared connection. A sandwich is a gift.

In the ever-changing communities of “New South” North Carolina, restaurateurs from around the globe are making their native flavors more accessible than ever. And it’s
not hard to find common ground: Turns out, sandwiches cross all languages.