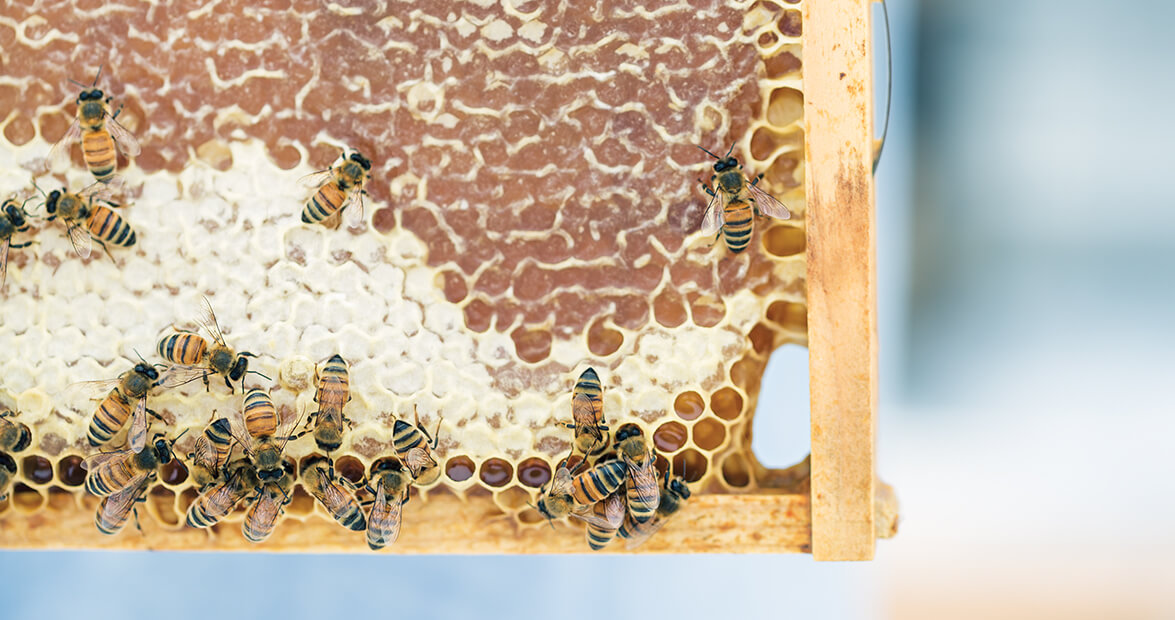 Hold on to your biscuits, honey. Those plastic bears on your grocery store shelves might add pep to your barbecue sauce, but when it’s time to sweeten up your grandmother’s biscuits, you can do better than common wildflower honey. Most grocery store honey originates with clovers or wildflowers, made up of a hodgepodge of any old blooms.

With more beekeepers here than in any other state, North Carolina has a history of cultivating varietal honey — that is, honey made from the nectar of just one plant. “Each plant’s nectar has its own chemicals,” says David Tarpy, professor of entomology and plant pathology at North Carolina State University. “Those chemicals get concentrated in the honey and give honey its particular flavor.” 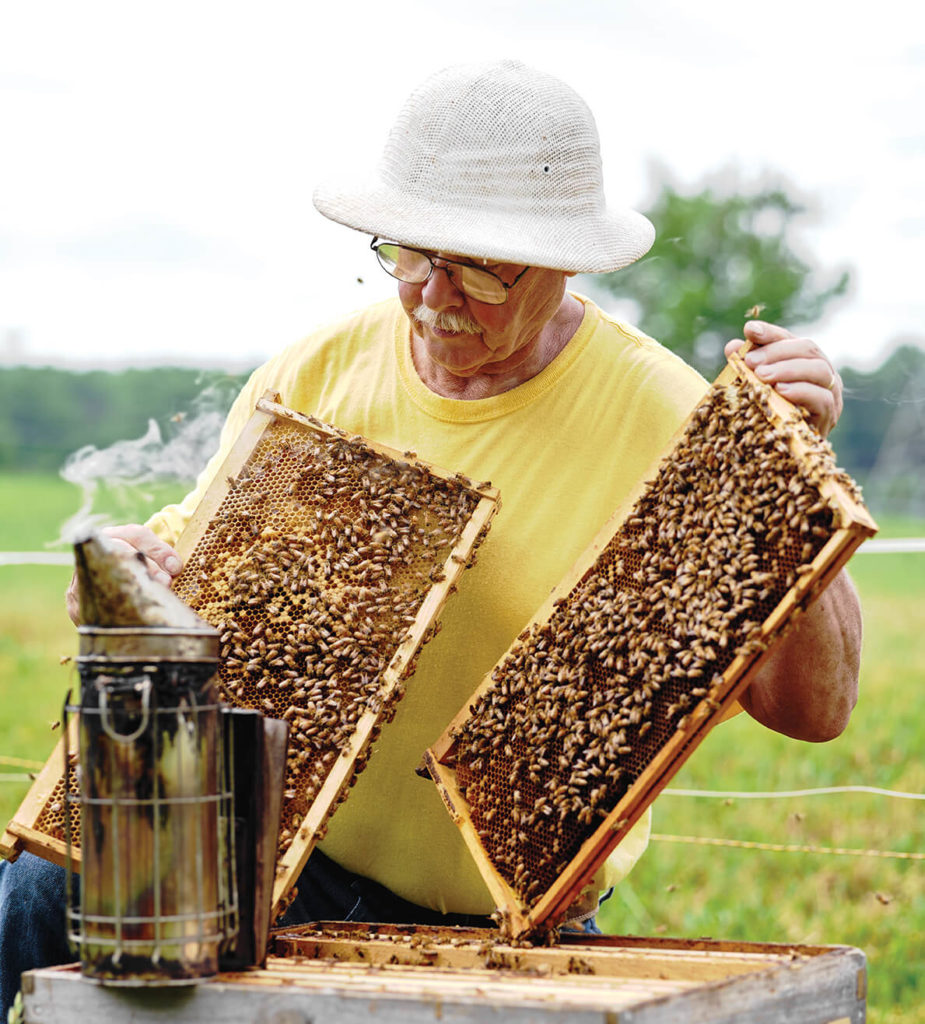 What’s more, each of the state’s regions has different blooming plants, so the mountains, Piedmont, and coast each have their own historically unique honey varietals. But because most of North Carolina’s beekeepers are hobbyists, and varietal honey can take some work, most of it doesn’t make it to the supermarket. Instead, it gets passed around to family and friends, sold in small batches at local farmers markets, and sought after by those of us who long for the sweetness we remember from childhood. 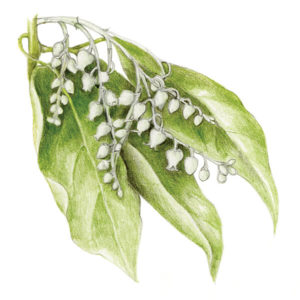 In the foothills and mountains, sourwood trees reach toward the understory’s southern exposure. Sourwoods bloom in summer, drooping brushes of tiny, creamy bells resembling lily of the valley, ringing nectar all over the tree. Bees scramble from bloom to bloom, stuffing their bellies with nectar that will become one of the most sought-after honey varietals in the world. Sourwood trees grow across the southeastern United States, but they grow best for honey in northern Georgia and western North Carolina.

The earthy, brown honey gives hints of its fragrant floral past, mingling with a buttery caramel flavor. “Sourwood is a special, rare, wonderful-tasting honey, one of the best honeys in the world,” says Chuck Norton of Norton’s Honey Farm in Reidsville, where he’s pulled honey from beehives for more than 30 years.

When it’s time to sweeten up your grandmother’s biscuits, you can do better than common wildflower honey.

Because not much else blooms in the summer when sourwood trees bloom, sourwood honey has little nectar from other plants’ blossoms, save some wild mint. The rich flavor is steadfast and trustworthy, the same as it was when honeybees first started rubbing their faces into sourwood’s teardrop bells hundreds of years ago. The taste is the same as it was when your grandmother drizzled it onto her pancakes or stirred it into her tea.

“If you taste sourwood, you know what it tastes like. You know sourwood,” Norton says. 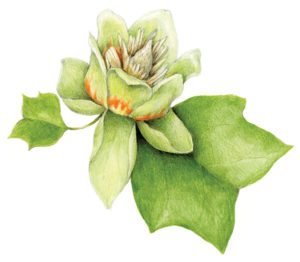 As the sourwood growth fades toward the Piedmont, towering tulip poplars reach more than 150 feet. They tuck their blooms between broad leaves, but if you look closely, you can see those pale yellow-green teacups, bottoms ringed with an orange band, like bull’s-eyes for hungry bees.

Tulip poplar honey is a surprise; a bold amber color lends the expectation of a dark, musty flavor. “Even though it’s dark, the flavor’s light,” says Greg Farris, who checks on beehives as a Piedmont apiary inspector for the North Carolina Department of Agriculture. “Pure tulip poplar is so dark you can barely see through it, but it has a light, buttery flavor.”

Adolphus Leonard, an eastern North Carolina apiary inspector, says that tulip poplar can often be the gateway to a lifetime of honey enjoyment. “Many people who taste that wildflower or clover honey they get in the grocery store and don’t like it try tulip poplar and find it to be surprisingly different,” he says. “They love it.” 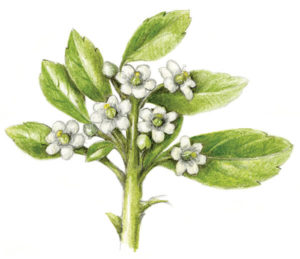 Down East, as thick stands of tulip poplars give way to pine savannas and scrubland, a shrubby holly bush known as gallberry sweeps and scrapes beneath the pines and sandy woods. Starting in the early summer, small white flowers blink open from the bush’s stems. Though not much to look at through human eyes, gallberry bushes are heaven for honeybees. The insects burrow and buzz between the leaves, and when in bloom, gallberry bushes can seem more like animals than plants, grumbling and humming, twitching and waving, with bees as the bushes’ mouths and muscles.

Although people who grew up eating gallberry honey might not notice its slight, leafy aftertaste, others pick up on a holly berry aroma right away.

North Carolina’s changing, and its honey is changing with it. Gallberry bushes don’t cover the forest floor like they used to. Tulip poplar and sourwood stands aren’t as dense and abundant as they once were. In our urban areas, we plant exotic ornamentals boasting strange nectars for bees. Some invasive plants, like privet, impart unusual and sometimes unpleasant flavors to our honeys. Still, honey flows wild and bountiful here. 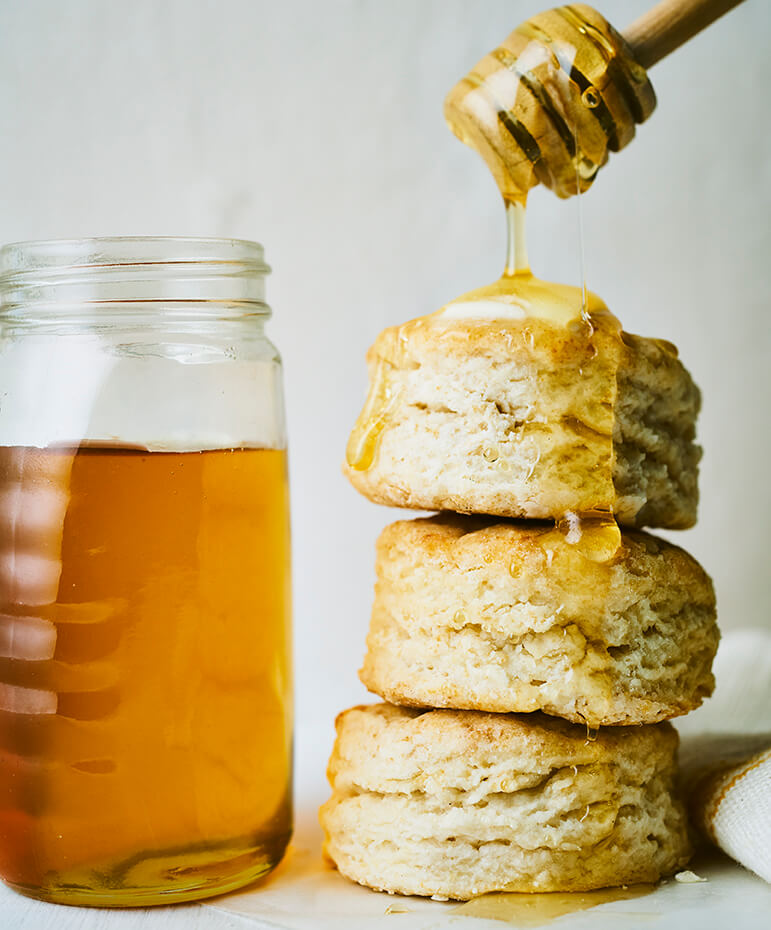 Honey is as mesmerizing in a jar as it is drizzled on biscuits. photograph by Charlotte & Johnny Autry

“Some other states have ‘bee deserts,’ which means there’s not enough for bees to eat. People have to plant gardens for them,” Leonard says. “Here in North Carolina, we have a lot of bee nutrition growing on its own in our woods, on our ditch banks. Dandelion, maple, aster. You couldn’t get rid of them if you wanted to.”

Tupelo and black gum trees rise up out of our eastern swamps. Wild blackberry tumbles across the state, opening its blooms along with wild cherry. Goldenrods wave fall blossoms on roadsides. Blankets of clover spread beneath our feet, and blueberry branches bow with little nectar-filled bells. The bees find it all. They bring that nectar home, to ripen to honey for a hungry hive, for the beekeepers, and for our supper tables. All the better for our biscuits to sop sweet and golden.