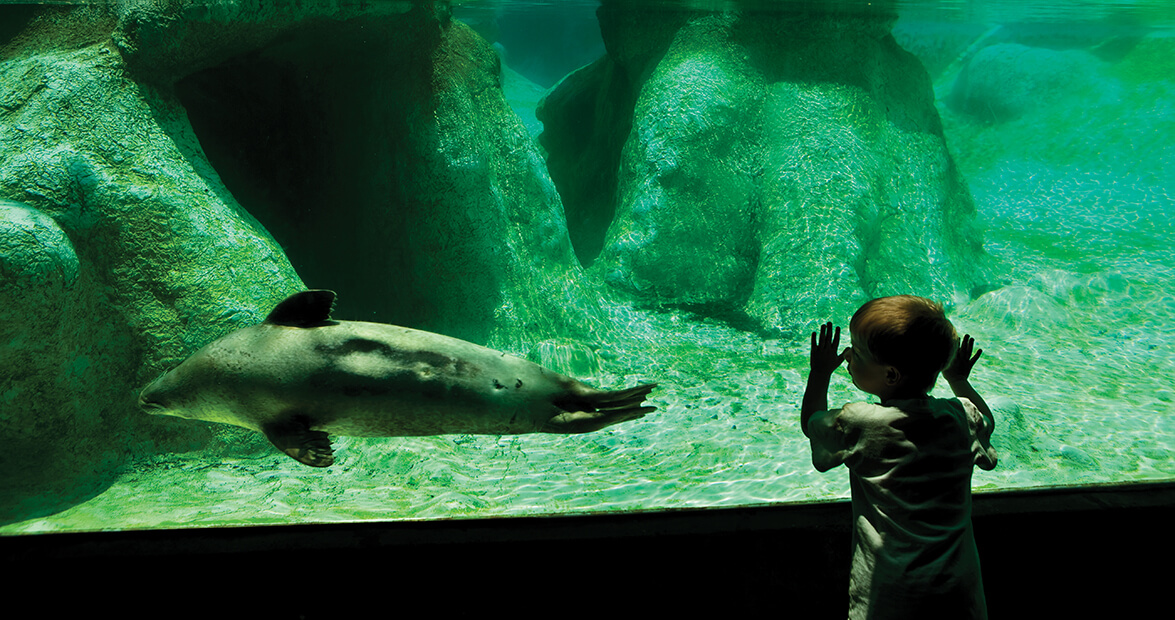 “Rule number three,” says The Toad. “Never, ever get close to biting animals.” He’s a tour guide, has snapped into the role with startling efficiency. We’ve been at the zoo for maybe five minutes. No one has any idea what the other two rules are. “Look,” he tells his little brother, taking him by the hand, walking him over to one wall. “We can learn about peregrine falcons right here.”

We hang back, my wife and I. This is the season of hanging back. Of letting the kids, finally able to do a handful of things for themselves, do things for themselves. We have no hope of seeing the whole North Carolina Zoo anyway. The Toad is 5½; his brother, The Wee, is nearly 3. Their attention spans will survive neither the morning nor the emergence, a few enclosures over from the peregrine falcon’s, of the Arctic fox. “THAT IS SO AWESOME,” The Toad says. The fox looks like a cross between a dog and a cat in sheep’s clothing. “I want to be an Arctic fox!” he says. “I want to have creature powers!” I tell him he can. This idea holds the lion’s share of his attention until we see actual lions. Though that isn’t true: We see many animals, but no lions. The Arctic fox holds him until we see a soda machine. Then he loses his mind. Then we lose our minds, and buy him a soda.

The Watani Grasslands may be the showstopper here, a breathtaking, wide-open savanna that immediately puts aside most concerns one might have about the ethics of zoos. The whole of the NC Zoo does, really, and it should: Constructed at a time when the country was rethinking zoos, it was the first to radically reimagine ideas of habitat and captivity, seeking to provide animals with space to be, well, animals. “What’s that called?” The Wee asks, pointing at an oryx, which is a kind of antelope.

“Oh,” he says. Much of the day goes this way: After the initial thrills of the harbor seals and the sleeping polar bear, and the children’s near-complete delight at just riding the tram between North America and Africa, we fall mainly into pointing and naming. The Toad is interested in the elephants, but more interested in the coin-operated binoculars. The Wee is interested in the oryx, but more interested in handfuls of rocks. The zoo has prepared for difficulties such as these: Placed behind where my wife and I would like to stand and watch actual rhinoceroses moving across an actual plain, there are child-size ostrich eggs in which children might play while their parents consider the wonder of the natural world. This works fine until someone bonks his head on something. Then there are tears. These we mollify — we’re weak, OK? — with another soda.

“Alligators,” says The Wee, pointing at the alligators. The boys and I are again in North America; my wife has gone back to Africa to retrieve the diaper bag, which contains, we hope, the car keys. “They got feet and toes like me. Like under my socks.” I tell The Wee that’s so. I tell The Toad to stop climbing the rail separating him from the alligators. He’s breaking his own rule, I say. In the interest of general safety, we head for the gift shop. All trips to the zoo, it seems, bend toward the gift shop. “You can get whatever you want,” The Toad tells me. “You can get a kid toy, or a grown-up fragile thing.” I thank him for his generosity.

The Toad selects a zoo truck, and The Wee chooses a green monkey with Velcro hands. These they happily play with out in the sun until their mother returns from the tram — is all the world just one big shuttle ride from one grown-up fragile thing to the next? — triumphant, carrying the diaper bag, keys within. “I liked the waterbirds the best,” The Toad is telling his brother. “They go on water motorcycles and even their outside stuff is underwater, like their house and their stuff, and —” He looks up. “Daddy,” he says, “what kinds of stuff do birds have?”

I tell him I don’t know. He thinks I know everything; I’ve told him there are seven things I don’t know, and now I tell him that this is one of them. He regards me with suspicion, but then ducks back into his own world, a kid’s world, a world where it makes as much sense as anything else for giraffes and ostriches to come walking by. A world where there might be soda. Where his mom always finds the keys. Where, if we’re lucky, there’s always a gift shop at the end.