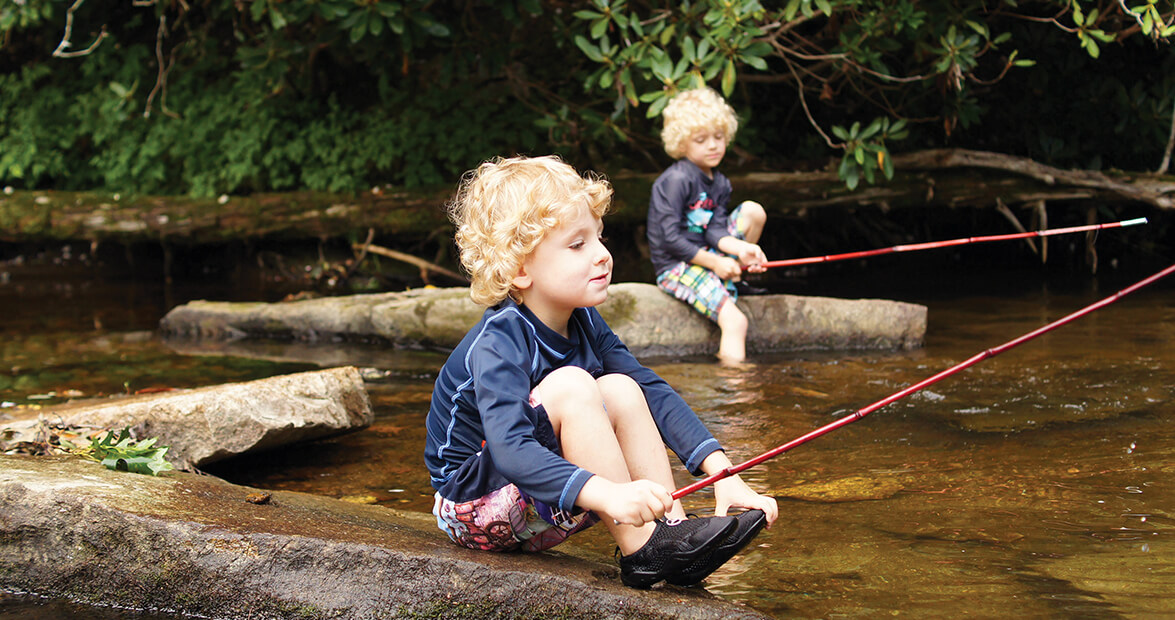 We’re deep in western North Carolina, among huge rhododendrons and house-size boulders and poplars and hawks and I hope not too many bears, and we’re fishing the fairly frigid west fork of the French Broad River. My boys, 6 and 4, have been after me about this for the better part of a year, ever since their aunt sent them fishing rods in the mail. Fishing rots, that is, as per both boys, and it’s just one — but it’s a cane pole, two pieces, a thin end and a thick end, so half a pole will do each boy just fine. Because my older son, The Toad, demands verisimilitude, I’ve rigged the rots with real hooks, even though we’ll never, ever catch anything. What I said to the guy at the tackle shop down the road: “Just show me the least likely thing to maim anybody.” He gave me a long look. “Listen,” I said. “I’m just choosing my battles here.”

Still, I have a pair of needle-nose pliers in my back pocket, and I’m gaming out how I might hold a child still enough to remove the hook from his ear, or his eyelid. The Wee, my little one, gets his line snagged in some leaves. I wade in after it to help him out. The Toad floats his bobber into a little eddy. He leans back and hollers out, in an utterly unexpected, professional-wrestling-style voice: “I’M GONNA CATCH ME A BASS!”

“Trout,” I tell him. Though if he pulled a fish from the water right now, I wouldn’t even begin to know the difference.

My grandfather Jack would be proud of me, were he alive to see this. When I was The Toad’s age, he started taking me fishing. He’d rouse me before dawn, and we’d pile cheese sandwiches and sodas into the cooler, drive out to the lake, and fish all morning for bluegill and sunfish. I loved it — loved making him proud when I’d reel one in, loved getting to steer the boat, loved bringing the dozen or so palm-size fish home to my grandmother, who’d fillet them into bite-size nuggets. I cannot conceive of how much she had to love one or both of us to fillet a bluegill. But there it is.

On one trip, we got caught out on the water in a thunderstorm so severe that our little outboard motor wasn’t strong enough to get us back to shore against the wind. We had to open it up full throttle and paddle as hard as we could just to make headway, lightning striking, as I remember it, all around us. I remember thinking: This is awesome. What was running through my grandfather’s mind, I now know, is probably not printable here.

The Toad rips not his ear but his pants, I tear a hole in my thumbnail, The Wee loses his line in the rhododendrons, we retie everything a few times over, and it takes about half an hour for the whole project to collapse into tears. The ghost of my grandfather saves the day, though, because I can almost hear him telling me: Just retie everything without the hooks. Which I do. “But how will we catch fish?” the boys want to know. “Oh,” I say, channeling Jack, who could tell a tall tale as easily as he could brew chicory coffee. “Don’t worry. They’ll see the bobbers. Fish love red and white. They’ll bite that, and we’ll just pull them out super fast. We’ll have fish before you know it.”

And it’s not that the lie works — it’s that the river does. Out here in the Nantahala National Forest, in the headwaters of the French Broad, the cold water sliding past and the boulders warm in the evening sun, just being here is enough. Soon, these boys are as calm as I’ve ever seen them. “I used to go rafting on this river all the time,” I tell them, “back when I was a kid. Every summer at camp.” The Wee looks up at me and says in a stage whisper, “Daddy. Shh. We’re fishing.” So I swallow that story for another time and leave them be. Above us, a hawk rides a thermal. Down here, we cast our hookless lines, hoping. We pull them back, and cast again.