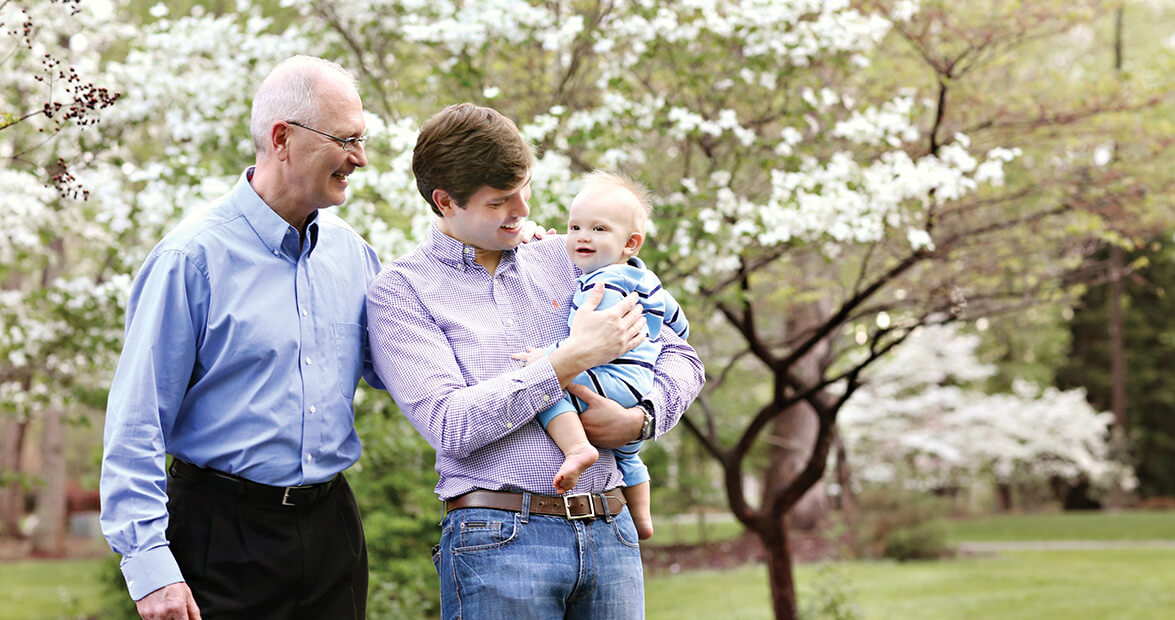 At some point, my dad decided never to throw out a shirt unless it had holes in it, and even then maybe it was worth saving, because, c’mon, this was a perfectly good shirt. Later on, he started tucking an ancient Kent State sweatshirt, rendered thinner and less warm after every washing, into his jean shorts. “You can’t wear that,” I’d say, horrified. Dad would shrug, acknowledging the fact that he’d heard what I said, but also acknowledging that he didn’t really care.

That’s just one of his greatest hits. Another one? We ate breakfast at a place called the Post House one time — one time — on the drive to a football game. In the 22 years since, he has mentioned this experience every time we have ever passed this restaurant.

This is my dad: wearer of sweatshirts. Rememberer of breakfasts.

None of this squares with the man I’ve heard about in stories. My dad played basketball in college. He listened to Jethro Tull, which, I assume, was a thing people did. (No other rock band features the flute so prominently, he’d say.) His first date with my mom was a Cheech & Chong show. He proposed to her at a stop sign. Some of their first casual pictures together from their honeymoon in 1976 have the same theme: a touristy Hawaiian backdrop (Diamond Head! Don Ho!). There’s my mom — gorgeous, and tan — with long brown hair. And in every photo, there’s my dad — shaggy, with goofy glasses, and shorts too short for Dr. J — standing next to her. He is, as far as I can tell, a suave guy. He’d have to be to land a woman like my mom, because, you know, those shorts.

Sometime between 1976 and my birth four years later, my dad became Dad, and made the transition to jorts. Maybe it happened around the time of his first Father’s Day. So I asked him.

“I don’t really remember it,” he said. I told him I understood. I forget things all the time now, too. Plus, his first Father’s Day was 35 years ago. “I don’t remember what happened 35 minutes ago,” he said, chuckling.

My son, Charlie, was born last July in Charlotte, and he’s grown up quickly, from a slowly wiggling, stare-at-nothing-in-particular infant, into a crawling, squeaking, smiling little guy who does somersaults on the carpet and has blond hair that sticks up in the back like a cockatoo. Before now, Father’s Day was the kind of holiday that I’d only remember when my wife told me to go out and buy my dad a card. I always forgot. I’d usually just call him. Sorry, I’d say. I’m not a card guy.

This year, I remembered. I’ll go get him a card, I told my wife. In March.

They don’t release them until at least May, she said.

This is my initial response to all fatherhood-related lessons. The line on the front of the Pampers turns blue when the diaper’s wet. Oh. You blow in your baby’s face so he’ll close his eyes and mouth before you dunk him at a swimming lesson. Oh. You have to lower the crib now, because he can pull himself up, and if he pulls off a Western roll over the railing, he will not stick the landing. Oh.

It hit me when he was born: I’m a dad. But it took me longer to realize that being a father meant that I would cease being someone else. “Charlie’s always going to see me as Dad,” I told my wife. “He’s never going to know Cool Jeremy.”

She paused. “I’m not sure if I’ve ever seen Cool Jeremy,” she said.

But it’s true. When you become a father, you’re no longer the man you used to be. That man is a fictional character to your son. He only exists in photo albums or Facebook posts. He might briefly reappear on an occasional night out. Someday Charlie will see an old picture of me, maybe on a date with his mom; maybe as a gangly teenager making a funny face, trying to fit in; maybe on my wedding day. That picture will not square with the image of me that he’s already built up, as the dad who will — and I’m just speculating here — serve a George Foreman Grill-prepared meal made from a terrible assortment of ingredients, or wear a Dawson’s Creek-era polo shirt around much too pridefully. He won’t care about the Post House, no matter how many times I tell him about it.

I didn’t think I would be like this. When I was young, I had no idea what I wanted out of life. Now I do. It’s a wife. It’s a son. It’s exactly this. Charlie will have no idea who I was. He’ll only know me now as Dad. And that’s exactly who I want to be.

A few months back, my whole family met up at my brother’s house, and my dad and I went downstairs to play Ping-Pong. I should be able to hold my own, I thought. Across the table, serve after serve, my dad would sweep the paddle over the ball, the spin strong enough to change its natural arc and make the ball curve toward the edge of the table before I could get there to return it. My dad kept winning. By 10 points. Then 12 points. Fifteen. It wasn’t even close.

I remembered that, in a former life, my dad had spent hours at the student union in college, playing foosball, pool, and Ping-Pong. He had a lifetime head start on me, and that fact came through as he mercilessly won game after game, ping after pong. And for a moment, Dad was his previous self, smirking confidently, basking in his victories. He walked away, “Locomotive Breath” surely playing in his head, before going upstairs to take a nap.