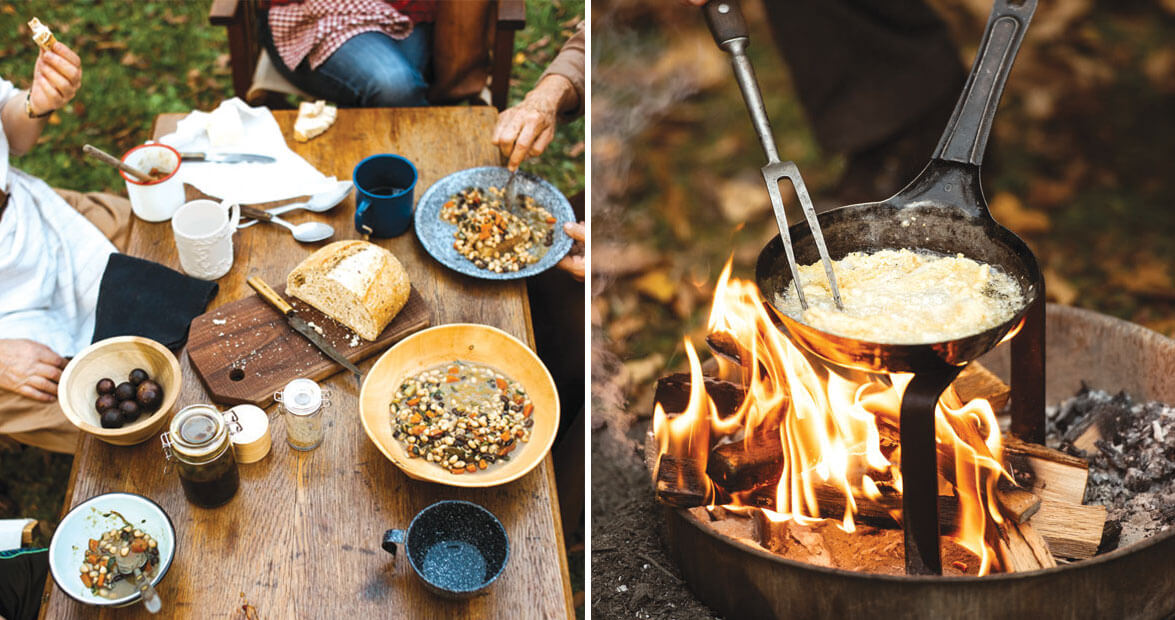 We cooked a wild pig loin on the campfire. I remembered to bring that. We’d been hiking and paddling along the Dan River all day, and there was a light, misty rain, and starting the fire took some doing — but I’d packed fatwood and a tarp, so we avoided a retreat to the tent. We ate wild pig with our fingers as the sun set, and then the real challenge surfaced: I had forgotten to pack dessert. What kind of camping trip is it without a campfire dessert?

We scrambled to make do. My daughter, Markie, sliced apples into a heaping mound in a triple layer of tinfoil, while I chopped two Milky Way bars with a folding knife. We added a few squirts of squeeze Parkay and crossed our fingers. Twenty minutes in the fire, and the result was a steaming, caramelized, sweet-tart ambrosia that had us licking the foil. “Granny Smith Milky Way Bake” we dubbed it, and it’s been a family camping staple ever since.

There’s something wonderful about campfire cooking any time of year, but it’s at its prime in the fall, on crisp afternoons, when a fire warms your heart as it cooks your meal. Sadly, the practice is largely relegated to camping trips, although in many municipalities — including my home turf of Raleigh — an open fire is allowed in your backyard as long as it’s used for cooking or warming. The advent of portable grills and stoves hasn’t helped keep campfire cooking top of mind. It’s just too easy to lay in a bed of charcoal briquettes and catch the rest of the game. Who’d want to fiddle with a fire?

Well, I would. There’s no doubt that campfire cooking requires extra planning and, often, effort. You can’t dash to your neighbor’s for a forgotten half-cup of heavy cream. But when I think of my most memorable meals, an outsize share took place beside a campfire. Dutch oven enchiladas in the Hatteras dunes. Thin-sliced steaks cooked on smoking-hot stones at Jordan Lake. Skewered fresh squirrel — yes, fresh and not from the grocery store! — on the banks of the Neuse River.

Those memories have as much to do with the communal aspects of meal-making as with the food itself. Camp breakfasts have always been a highlight for my family, especially when the kids were young and learning their way around a frying pan and spatula. Markie and Jack insisted on cooking their own pancakes, and once I showed them how to pour the batter into the pan to make the shapes of their initials, it was a whole new ball game.

Sometimes, trying to figure out what shape or letter the pancake was supposed to be was akin to finding animals in the clouds. There’s a lot of room for interpretation. The kids would bring their pancakes over to show me, and the pressure was on to make sense of a half-burned blob of half-cooked pancake batter.

But what I love more than a pan of flapjacks and sausage are the multicourse dinners. These take time to prepare, which means time to savor each step in the process. My favorite cooking fire is an old-fashioned keyhole fire. It’s a snap to build, easy to control, and works whether you’re on a beach or a mountain or in your backyard. You can cook enough food for a pile of people on a keyhole fire, and still maintain a nice, roaring tower of flames to keep you warm and toasty. 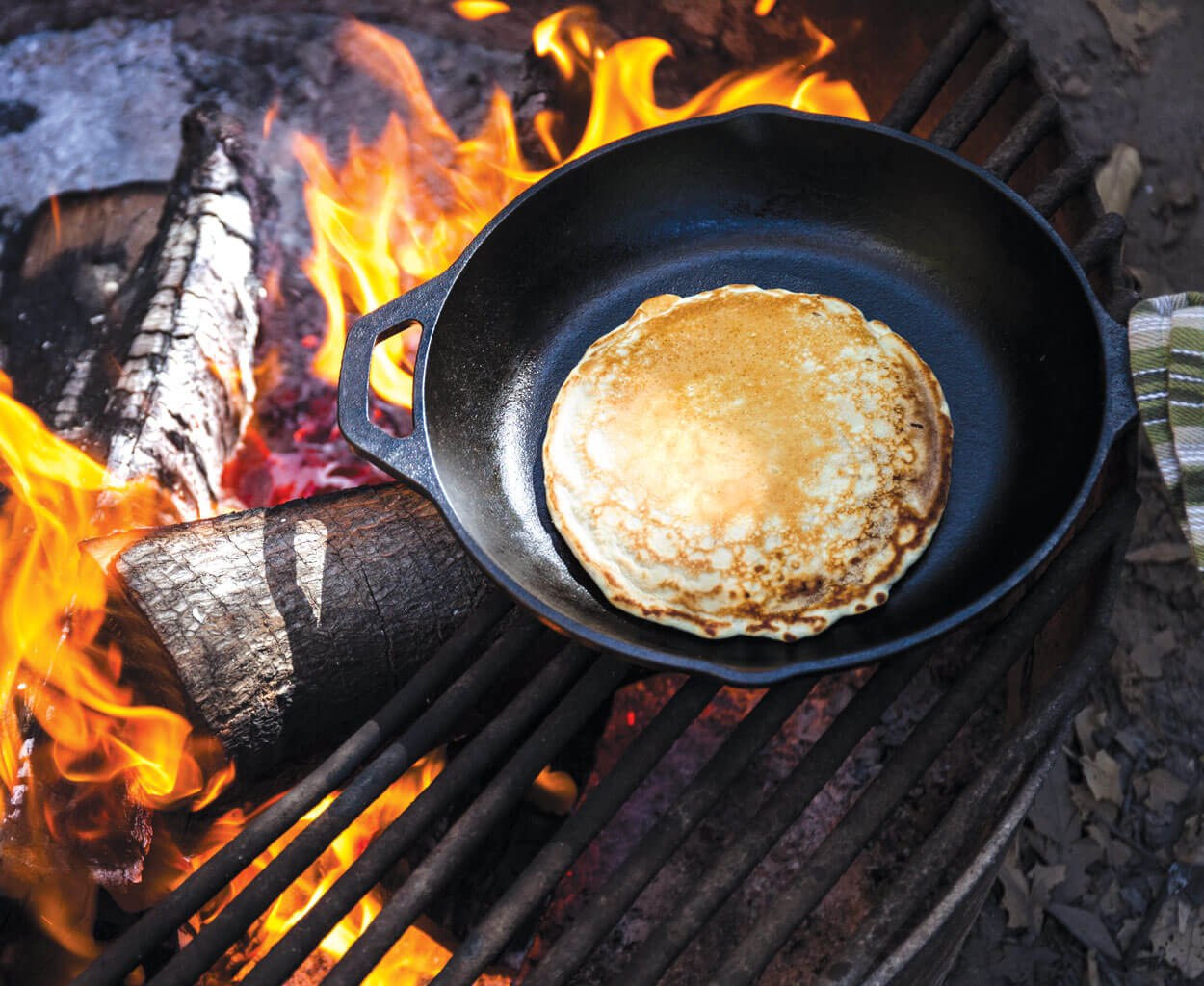 Pancakes in your pajamas at home are pretty good. Flapjacks by the fire? Even better. photograph by FRANKIECARR/ISTOCK/GETTY IMAGES PLUS

We start by piling up stones in the outline of an old keyhole, the kind with a round knob on one end and two parallel lines extending out. Inside the round knob, we build a teepee fire, and then start the dicing, slicing, and shish kebab skewering. Once the coals are hot, we scooch them over in between the two rails of the fire lay’s narrow tail, which serve as pot supports. If it’s just the family, we might need only a couple of feet of cooking area — room for a pot of rice or pasta, skewers of meat and veggies, and coals for biscuits. Extend the platform stones to three or four feet long, and you could have the entire campground over for dinner.

It’s the kind of all-hands-on-deck culinary experience that we rarely share outside of the woods. Someone feeds the fire. Someone stirs the pot. Someone fusses with the coals. No one is watching television. Everyone works together. There is conversation and laughter. You don’t get that with an Instant Pot.

Gathered shoulder to shoulder, leaning away from the smoke, watching the sparks rise overhead, I sometimes wish it took even longer to cook a meal in the flames. The firelight draws people close. The smells draw them closer. As the flames burn down to glowing coals, the fire seems an older and wiser version of its earlier, impetuous self. It makes us want to sidle up, to be the first to taste the cornbread, or the first to stuff down a s’more — which is why so many marshmallows go up in a wad of sugar-fueled flame, held aloft by the impatient.

It’s far better to sit back and relax. And take a long, hard look at those pancakes. Is that a velociraptor in the frying pan? A Tonka truck? Slow down. Let the fire work its magic. Like a lot in life, you can’t rush campfire cooking. The outside can look picture-perfect. But it’s the inside that counts.