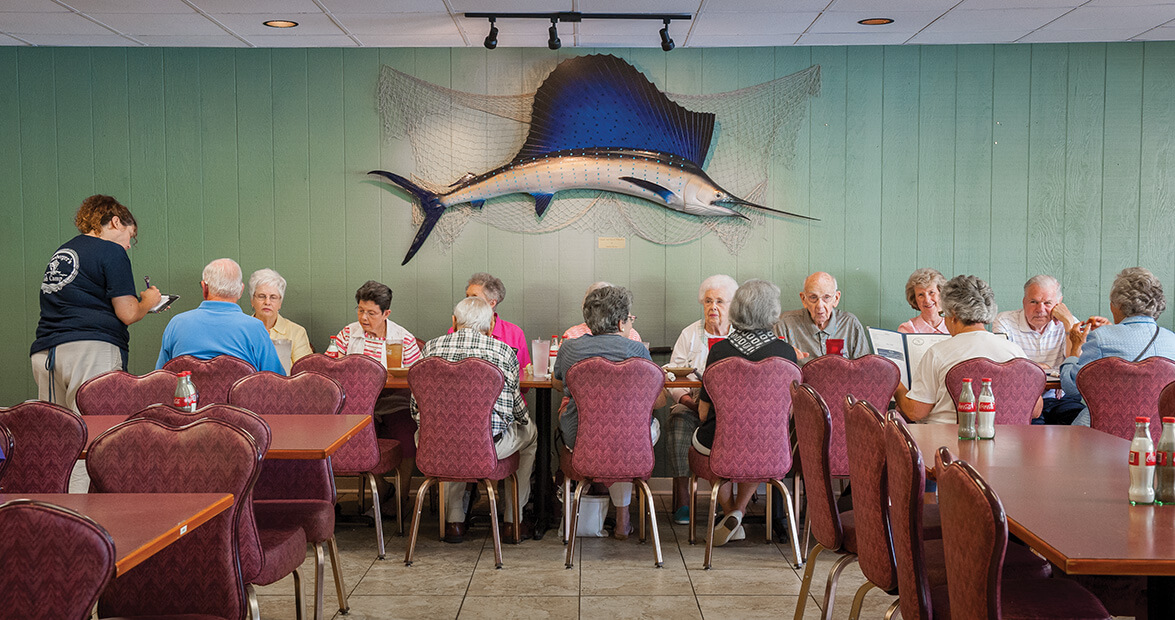 Titus Greene wants to be specific about Lineberger’s Fish Camp.

Greene will tell you the same thing a lot of restaurant owners always tell you about what makes a successful restaurant. The food has to be good. The atmosphere has to be right. The service needs to be prompt. And yes, Greene says he has all of those things.

But Greene’s restaurant has something a lot of new restaurants don’t: a name. One that means something. One that can inject a strong dose of history and tradition into a catfish joint.

To understand why Lineberger’s Fish Camp is important, you have to understand something about the place it inhabits. Gaston County has at least eight fish camps. There are some up in Dallas, a few in Gastonia, and a bunch down in Belmont. They all have a lot on the menu, but they serve up mostly one thing: the Mound of Brown — a pile of fried fish, hush puppies, and slaw.

Economically, this wouldn’t seem to make any sense. If you opened eight Red Lobsters in one county, six of them would probably go out of business. But with fish camps, especially in Gaston County, there’s plenty of supply because there has always been plenty of demand.

On a Friday night, the parking lot is full at the Catfish Cove, which is just a few miles down the road from Twin Tops — which is also full. Despite its lonely location, Twin Tops may be the most popular fish camp going in Gaston County. It’s a full eight miles from downtown Gastonia, at a fairly boring intersection with an auto-repair shop across the road.

There is a wait. The woman in the T-shirt up front says it won’t be long, maybe 10 or 15 minutes. A guy from the West Stanley Fire Department strolls by with sunglasses, a cropped haircut, and a belt buckle with a cross on it. He walks out carrying a plastic bag full of to-go boxes.

An old man walks out and sits on the bench. “There’s three brothers and a friend that are about to come out of that door,” he says. “We eat here every Friday.” And then, on cue, four men walk out and they all leave, stomachs full.

The inside has the ambiance of a cinder-block mess hall, with the exception of one large wall, which is a mural with mountains on one side and the sea on the other. Knickknacks are strewn about, as if someone had bought up every nautically themed tchotchke they could find at a decade’s worth of garage sales. There is a hand-painted tropical fish next to a mermaid lying on her side. A marlin hangs above some booths, topped only by the mounted hammerhead shark that hangs over a wall of candy bars across from the cash register out front.

There is a dull roar of conversation, which doesn’t have to compete with the music, because there is no music. The order goes into the kitchen with Janet, the server. A few minutes later, Janet comes out with a pile of brown, crispy catfish filets, sprinkled liberally with salt and pepper, stacked up against a smaller hill of hush puppies and anchored by a solid, foil-wrapped baked potato. There’s a line at the salad bar. There is tartar sauce.

Of course it tastes good.

After it’s over, Janet comes back and deposits a greasy check on the table and tells the couple at the next booth that she’ll see them again next week.

This is what fish camps used to be. And this is what they still are today.

This is a seafood restaurant, really, fueled by deep fryers, familiarity, and friendliness. They’re a part of life in Gaston County — one that has stayed relatively the same, even as everything else around them has changed. They’re what’s left from another era, and every Friday night, people line up to fill their plates and go back in time.

If you’ve lived in Gaston County for a while, there are two places you probably go every week.

The first is your church.

The second is your fish camp.

Some people go more than once a week. Jerry Bostic and his wife, Peggy, go three, maybe four times a week. To the same fish camp.

Jerry started going to Lineberger’s, the old Lineberger’s, when he was a student down the road at Belmont Abbey College. He’d carpool to class with a buddy who started the camp. Jerry would go on a Tuesday night and eat all of the green shrimp he could, because it was all-you-could-eat. The students tried to outeat each other. Luther Lineberger, who ran the place, came over one time.

“You getting enough?” he asked.

“I hope you’re full when you leave,” Luther grumbled, “because you’re not eating your fries and hush puppies.”

Luther was a serious guy, Jerry remembers. He was a fella who stood out in a room. He was the man who started frying catfish for friends and coworkers on Friday and Saturday nights. That made him popular. Soon he slapped up a building with a tin roof on South New Hope Road and opened it up in 1948. When business got to be good enough, Luther quit his third-shift job at Cramerton Mills and fried fish
full time.

Luther Lineberger ran his fish camp right up until he died in 1978. His son, Jack, took over and ran the restaurant until he died in 1994. Jack’s sons, Mark and Wes, ran it until the place closed in 1998. After a stint as a Mayflower Seafood Restaurant, the old Lineberger’s burned to the ground.The new Lineberger’s doesn’t look like the old place. It’s in a new spot, on Union Road in Gastonia, a little closer to town, down a hill, next to a cemetery. It’s brighter than the old place. It’s newer. There are stained-glass windows inside with the names Luther and Stella on them. Greene says he’s tried to duplicate as much as he can from the old place, down to the slaw, the cocktail sauce, and the hush puppies. And he’s even brought back the people. “I’ve had five Linebergers workin’ for me over the years,” he says.

Jack and Beverly Kimbro come in to Lineberger’s every Friday night. Flip Dow, the bondsman, is a regular. Gerald Duncan owns Hillbilly’s BBQ down the street, and when he’s not eating barbecue, he’s in Lineberger’s eating fish.

And there’s Bill Helms, who comes in almost every day to buy something sweet. At first it was Mallo Cups. “He’d come in and buy every one. Wipe us out,” says Greene. Then he switched over to Smoothies. Now it’s Key lime pie.

In time, nearly two dozen fish camps opened across Gaston County, but Luther’s was the first. His fish was fried outside in a brick fireplace.

Inside, people ate at picnic tables. Sometimes, there would be a line 50 deep around the building at 5 p.m. Sometimes Jerry would get off work on a Friday after a long week as a teacher at Mt. Holly High School. Three to six other couples from the school would show up at Lineberger’s
with him.

The people kept coming, sometimes causing a traffic jam out on New Hope Road. Luther kept cooking. But eventually, some of the people who worked for Luther branched out and started their own places. Raymond Stowe, a cook, left to start Catfish Cove. Howard Smith worked at Lineberger’s when he was a teenager. Now he runs Twin Tops.

Gaston County was once the combed-yarn capital of the world. More than 150 textile mills opened between 1848 and 1950. It grew fast, and when the working class moved in, they needed a good place to get a meal. The catfish was in the Catawba River and the creeks were close by. First the cooks made their meals outdoors on the riverbank, with whatever catfish, carp, and perch they could catch. Then they moved inside.

The mills closed, but the tradition remained. And that leaves people like Jerry, drawn to the thing he’s been drawn to so many times before. He shops around every once in a while, but he mostly sticks with the new Lineberger’s. So does Peggy. She grew up in Gaston County. Her parents, Doris and Carl, took her to the old Lineberger’s on Friday nights after a long week of work at McAden Mills. A lot of other parents took their kids, too. Their parents are gone now, but the kids keep going.

Barry White learned how to eat a whole catfish at the old Lineberger’s. There’s a method. You hold it like you would a comb. You bite it midway, gently, just enough to pull the meat off the bones.

White got hooked on Lineberger’s while dating his future wife, Ginny. They’d go down to meet her parents in Tega Cay, South Carolina, across the border from his house in Charlotte. Then they’d all hop in the car and drive up to Lineberger’s to have dinner with Ginny’s uncles. One uncle wouldn’t eat fish anywhere else. One time they waited in line. Outside. In the snow. At that point, you have nothing to do but talk to people in line around you.

Once at a fish place in Morganton, White was with some friends, and a woman from Maryland asked a very basic question: What’s a hush puppy? Barry explained that it was a ball of cornmeal that was fried up with some leftover batter. Cooks used to throw them at barking dogs to get them to eat up and hush.

She tried one. “It was like a religious experience for her,” White says.

White and his wife, Ginny, still go to fish camps on Friday nights every couple of weeks. Lately, they’ve been going to the new Captain Steve’s in Harrisburg. Their infant granddaughter, Eleanor, goes with them sometimes. Eleanor ate her first hush puppy there. “When she gets more teeth, we’ll be getting her a child’s plate,” White says. “You’ve gotta treat them right.”

On a Friday night, there’s no line in front of Lineberger’s. It’s raining, and there are a few couples trapped under the awning, trying to stay dry. One of them has an umbrella. He becomes the most popular person on the porch.

Inside, the crowd is modest and the walls are bright. The food comes quickly. So do the words. There is so much to say about fish camps and Fridays. It’s a tradition that outlasted the circumstances that created it. It’s a place where people came to eat, then came to meet, and then never stopped coming. It’s a place to come and spend some of your paycheck. And it’s a place that’s familiar to you, where the food is fresh and fried and the folks feel like family. You
can talk about all of that, but all of that talking makes your stomach growl. It’s why guys like Bostic can’t stay away.

“You do realize you’ve made me hungry for fish now,” he says from his home. He figures it’s about time he went back.