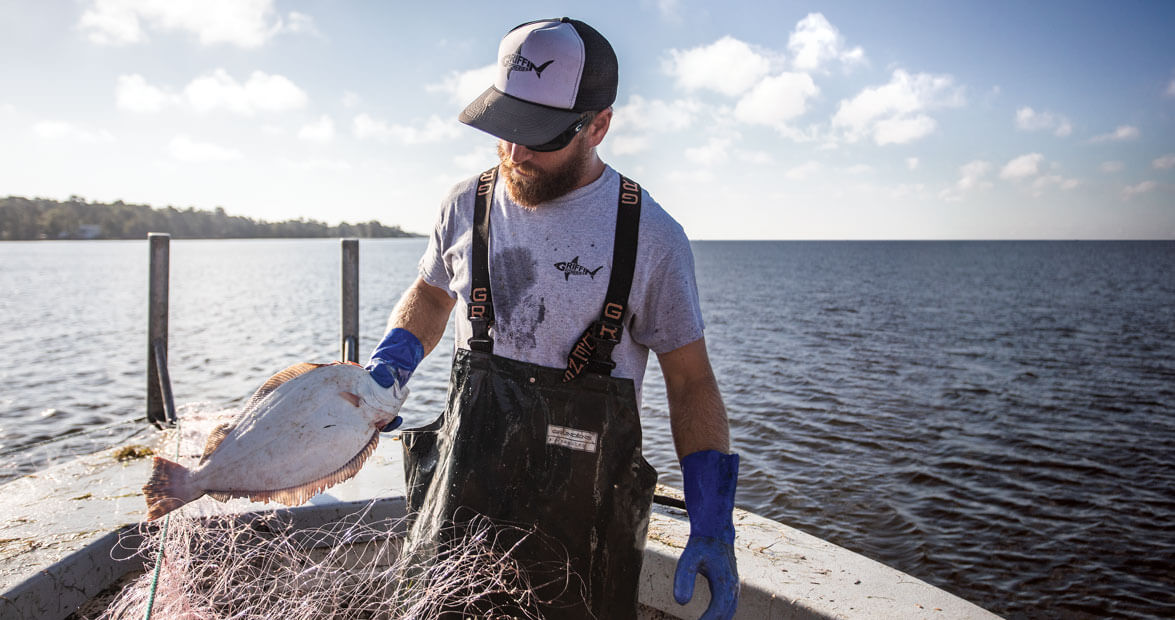 Brothers Chad and Carson Dunn, cups of Circle K coffee and cigarettes close at hand, are motoring north on NC Highway 12 heading to Chad’s fishing boat, docked inside a Kitty Hawk subdivision. Within minutes of arriving, and before the sun has crested the loblolly pines, the brothers have donned Grundens bib overalls and set out into Albemarle Sound to see what’s turned up in the gill nets that Chad set out the day before.

It’s that moment — when the pots or nets rise up out of the water to reveal the day’s catch — that thrills Vicki Basnight, a commercial fisherwoman and an owner of Basnight’s Lone Cedar Cafe in Nags Head, where whatever flounder the Dunn brothers have caught is headed. “It’s like Christmas,” Basnight says. “You never know what’s inside.”

But when the brothers arrive in the waters west of Jarvisburg, where they expect to find one end of their gill net, they can’t find the buoy floating on the water that marks the spot. They mutter about sabotage and speculate that someone opposed to gill nets has cut the line, making life a little harder this morning for these commercial fishermen. A couple of times a year, the brothers say, they find their nets damaged or buoys missing. This small nuisance is emblematic of the challenges they face trying to make a living as commercial fishermen. It’s an industry always teetering on its own inherent tension: There are only so many fish, and if too many are caught, there will be no more to catch.

Less than half of the seafood sold in North Carolina is caught by local fishermen.

Diners likely don’t consider what it takes for that fried flounder flanked by hush puppies and coleslaw to appear on their plates at restaurants up and down the coast. Truth be told, less than half of the seafood sold anywhere in North Carolina is caught by local fishermen, according to research from North Carolina Sea Grant. More than 80 percent of the seafood purchased in the U.S. is imported, which means that most of us are eating fish and shellfish from Asia, Canada, and South America.

Although data is limited, a 2012 survey — the most recent available — of commercial fish houses in North and South Carolina indicates that about 46 percent of their seafood is shipped to the Northeast, where it can fetch higher prices.

But the national “eat local” trend has inspired North Carolinians to seek out homegrown seafood like never before. Which means that the Dunn brothers are now part of a new and growing ecosystem that supports both local fishermen and the locally owned restaurants that buy their catch. Still, it’s a tough business. “It’s feast or famine, is what I’d call it,” Carson says. “It’s a gamble every day.” 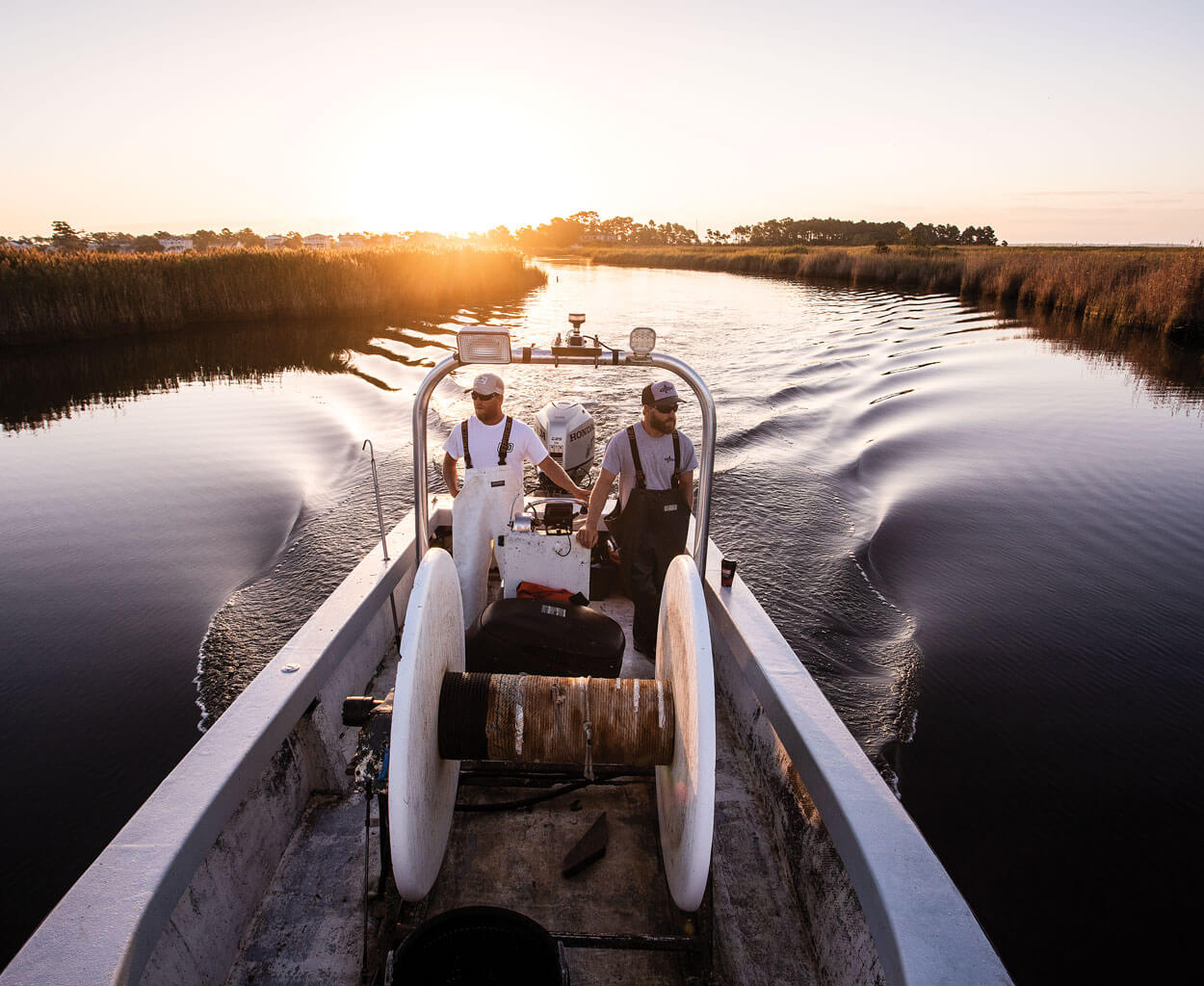 Chad (left) and Carson Dunn set their gill nets in the canals of Kitty Hawk, hoping for flounder and mullet. They sell their catch to chefs on the Outer Banks. photograph by Chris Hannant

The Dunn brothers grew up in Wanchese and graduated from Manteo High School. Chad, 30, knew he was going to follow his father into commercial fishing. Carson, 27, was trained as a diesel mechanic but was pulled back to the water. They both make their living by a combination of commercial fishing for flounder and mullet, working sportfishing trips for tourists, and guiding duck hunts in the winter.

Their father, Charlie Dunn, who left Delaware decades ago to be a sport fisherman, knows intimately the life his sons have chosen. “I tried to discourage them as hard as I could,” says Charlie, who now cuts fish at Locals Seafood, a Raleigh-based fish and shellfish seller focused on North Carolina seafood. “It’s a hard life. No set hours. When it’s there, you got to get it. If it’s not there, you got to find it.”

The brothers are realistic but undeterred by the career they have chosen. “It’s a lifestyle — I like what I do,” Chad says. “I don’t have a job — I do what I like every day.” Nonetheless, fishermen like the Dunns often find themselves caught in the middle: between trying to make a living in the family profession they love and dealing with the complex forces shaping the business today.

A rhythm develops: the hum of the reel, the thwack of the mallet, the slap of a flounder in the bucket.

Federal regulators, with the input of fishermen and scientists, impose catch limits, seasonal restrictions, and other regulations to prevent overfishing and to ensure the industry’s survival. Some of the industry’s methods face criticism, including gill nets, which are legal and approved for flounder in the inshore waters of North Carolina. Critics oppose the large, nearly invisible nylon nets anchored on the bottom by weights and held by buoys at the top. The nets are indiscriminate, catching not only the intended fish but other species, too, including protected sea turtles. Regulators and fishermen have worked together to adjust gill net regulations and to reduce the impact on bycatch.

The conundrum of gill nets is on display in the Dunn brothers’ boat. As they reel in 1,000 yards of net from the waters, Carson grabs all the flounder, tossing the larger ones into plastic buckets. He throws undersize flounder and out-of-season finfish back in the water. Since it would take too much time to cut them out of the net, dozens of crabs are instead pounded with a rubber mallet before the nets are wound back in around a reel. A rhythm develops: the hum of the reel, the thwack of the mallet, the slap of a flounder landing in the bucket, the splash of something being returned to the ocean. 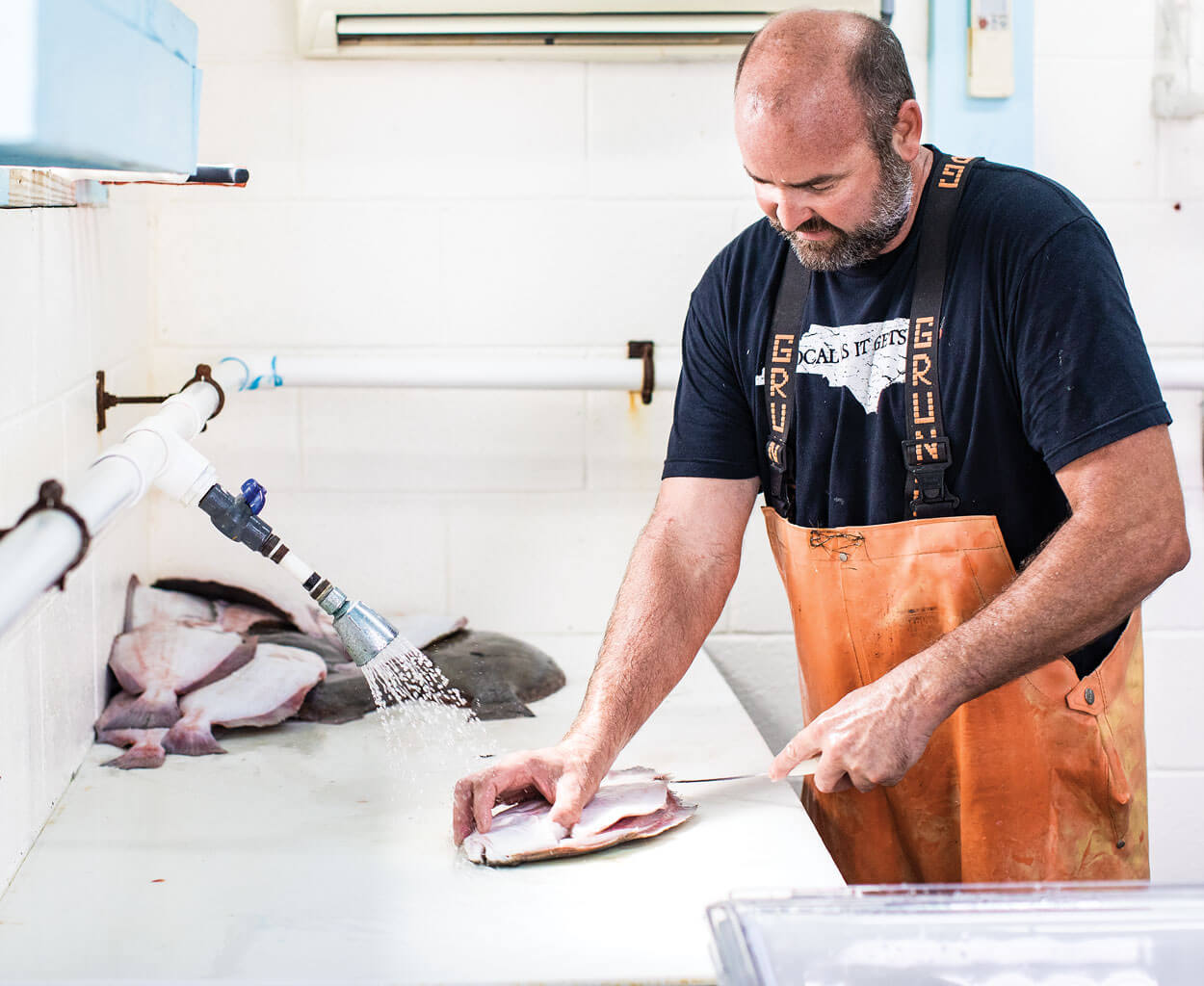 By the time the sun is straight overhead, the brothers have docked their boat and driven to Basnight’s Lone Cedar Cafe, located on the causeway between Manteo and Nags Head. They unload their flounder outside the restaurant’s fish-cutting shed, where Blake LaRose is waiting. He weighs the brothers’ haul: 170 pounds. At $4.50 a pound, that means the Dunns will split about $765 for the day’s work.

“Appreciate it, Blake!” Carson calls as the brothers drive off. LaRose, who works full-time building boats and part-time as a fish cutter at the restaurant, slides each flounder through a machine to remove the scales. One by one, he fillets each fish in about 32 seconds. At the peak of flounder season, he and another employee will cut up to 3,000 pounds of fish a day.

“For quality, you cannot beat same-day-caught fish,” he says before sending the Dunns’ fish to the kitchen.

Waiting for it is Executive Chef Bud Gruninger, who has worked at the restaurant since it opened in 1995. Gruninger credits his long tenure to the owners’ commitment to buying fresh, locally sourced ingredients: “A lot of owners would say, ‘Just buy the cheapest you can get.’”

But these owners are the Basnight family, including former State Senate leader Marc Basnight. He and his late wife, Sandy, started the restaurant with their oldest daughter, Vicki. Now, she and her younger sister, Caroline, run the business. The restaurant’s support of local fishermen started with their father. After the first year in operation, he declared, “We need to do all local seafood — and don’t go away from that.”

Gruninger says he texts with about 20 different fishermen to find out what’s available before writing the daily specials. They aim to buy only from North Carolina day boats or two-day boats to ensure freshness. The two exceptions: The scallops are from five-day boats and bought from Billy’s Seafood on Colington Island, and the squid is caught by North Carolina boats but purchased from a New Jersey fish house.

The restaurant buys some shrimp and all of their soft-shell crabs from Vicky Basnight, who has her own crab shedding operation. Basnight, who got her first skiff at age 10 and her commercial fishing license a few years later, comes from a long line of fisherfolk: Her maternal grandfather and great-grandfather were commercial fishermen. Her grandfather was a long-netter in Avon and ended up owning a fish house in Wanchese and later working for North Carolina Sea Grant. 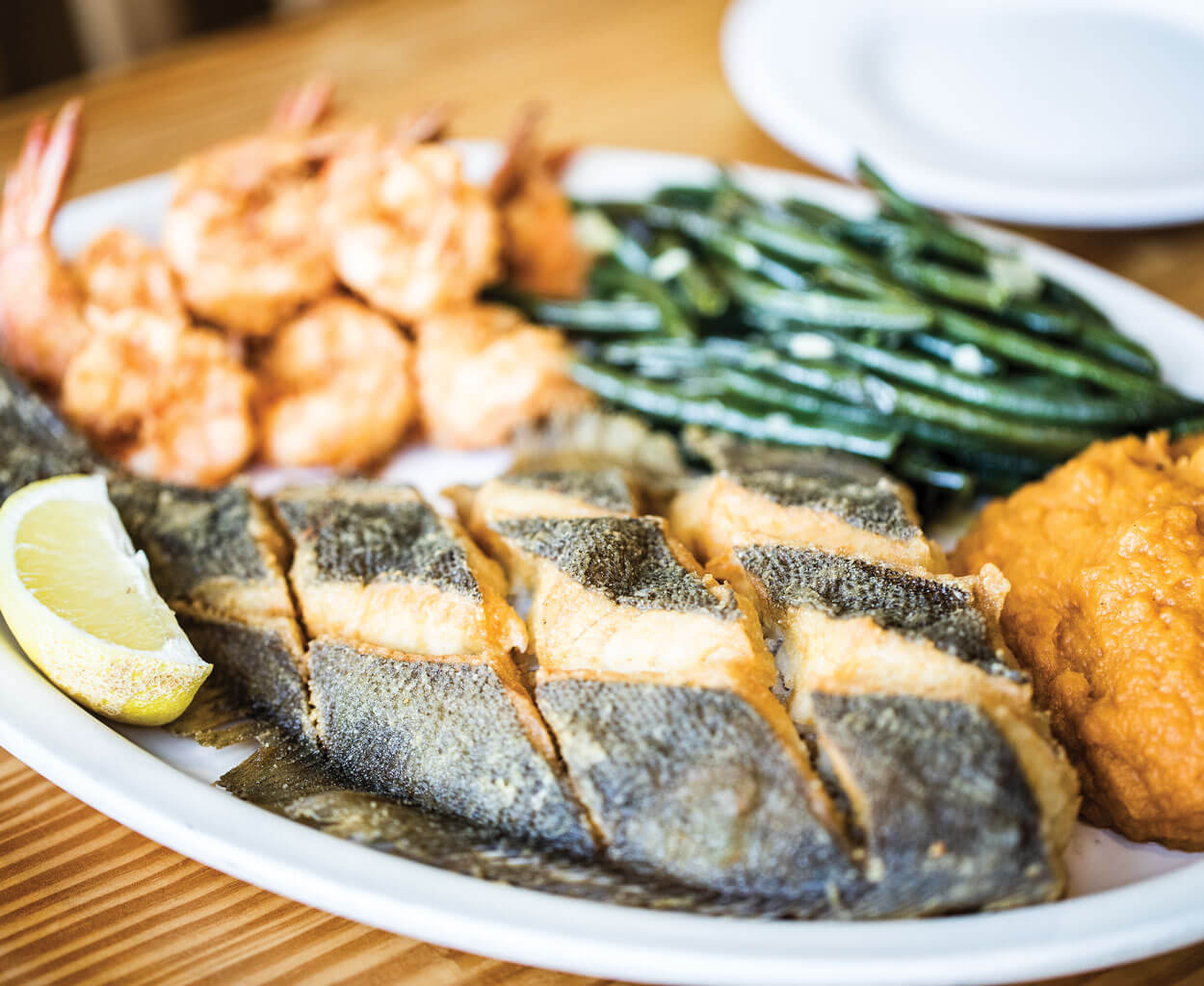 A lucky dinner guest from Virginia will enjoy fresh-caught flounder with shrimp. photograph by Chris Hannant

In a landscape where commercial fishermen and environmentalists are often cast as opponents, the Basnights are conscious of both sides. Their restaurant only uses paper straws, since plastic ones can harm marine life. The building is surrounded on three sides by raised garden beds, where a full-time gardener grows basil, carrots, tomatoes, peppers, herbs, and more for the restaurant’s menu. The garden is watered by huge cisterns that collect rainwater off the restaurant’s roof. “We are 100 percent environmentalist here,” Basnight says. “We are also 100 percent supporters of commercial fishermen.”

The flounder that the Dunn brothers caught this morning is now in a hot pan, and orders are coming in. Soon enough, a platter of broiled flounder with sweet potatoes and green beans is ferried to the table of David and Lisa Roberts of Hopewell, Virginia. The Robertses are regular visitors to the Outer Banks, and whenever they travel here, they come to the Lone Cedar for dinner.

“We know if we eat it, it’s been caught right out there,” David says, pointing to the blue waters of Roanoke Sound visible just outside the dining room windows. “It wasn’t shipped from somewhere else.