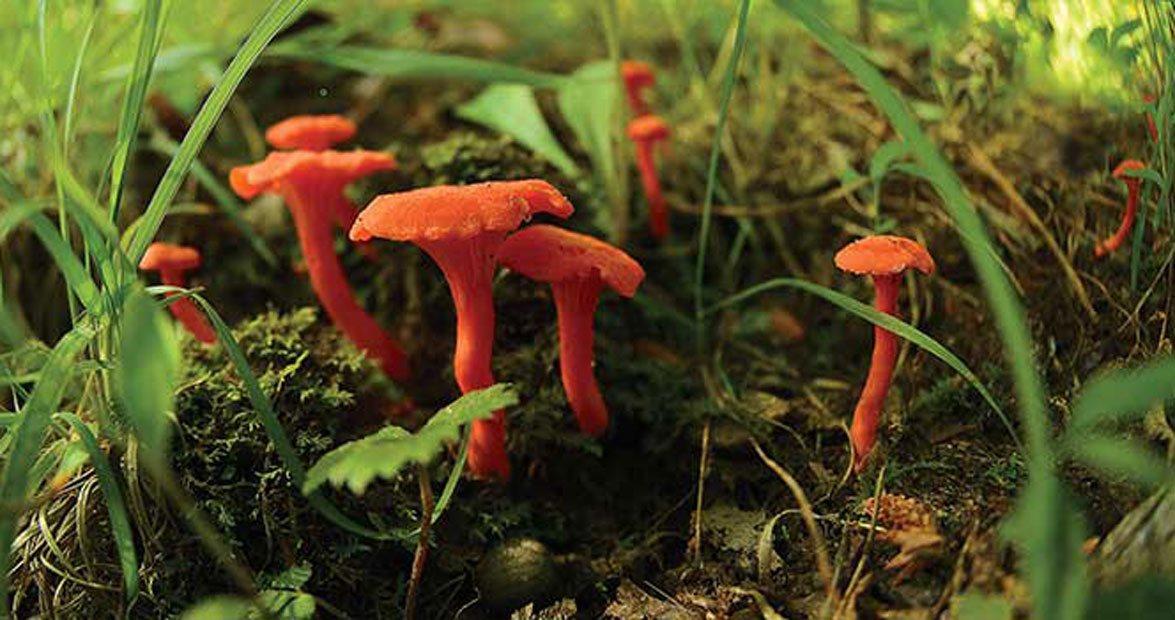 At the risk of stating the obvious: Stinging nettles sting. Same for their evil twin, wood nettles. They flourish in the mountains, growing in dense, chest-high patches, often along well-traveled paths with foliage perfectly spaced to brush against exposed ankles, knees, thighs, and arms in a single pass.

Nettles are not passive monsters, either. Their leaves — spade-shaped, sawtooth-edged, and covered in tiny hypodermic-like hairs — are deep-woods sirens, luring city slickers and unsuspecting children to caress them. When skin comes in contact with either plant, the resulting irritation — a sharp, searing pain that quickly evolves into a prickly throb — can move a preacher to drop a nickel in the cuss cup. Maybe even a dime.

They also happen to be quite tasty.

Foraged spring nettles are tender and innocent. And even the nastiest mature leaves lose their sting when they’re boiled and blanched, brightening up pesto and about any recipe that calls for spinach.

Nettles — a hiker’s scourge and a forager’s delight — embody one of many mountain food paradoxes, and a feast for those who know where to look.

Alan Muskat is a field guide of the former, essential variety. He carries a tattered, decades-old mushroom field guide as a prop on the No Taste Like Home foraging hunts he leads through the forests around Asheville.

“The place to look for knowledge isn’t in books,” says Muskat, who’s often recognized as the “Mushroom Man” from his appearances on local and national food shows. Others just know him as that laid-back guy with the crazy-curly hair at the weekend Asheville Wild Foods Market stand at the Asheville City Market, the one who can help homeowners identify a funky fungus in their backyard.

Muskat is quick to point out that he’s not a mycologist (for laymen, that’s an expert in all things fungi). Instead, Muskat knows a lot about the mushrooms that are safe to cook and eat — like chanterelles, morels, and turkey-tails — and enough about their inedible look-alikes to keep him out of the emergency room.

“The No. 1 mistake people make is picking something that looks like a chanterelle. It doesn’t kill you, but it makes you wish you were dead,” he says.

His deep-versus-broad expertise in, and appetite for, edibles also includes just about everything else in the forest — from burrowing grubs to spruce tips — which explains why he refers to himself as an “opportunivore,” and jokes that his mother lovingly refers to him as a “disgustivore.”

At closing time at the market, he can often be found across South Charlotte Street, leading free tours through the George Washington Carver Edible Park — the first forest garden in the country where the public is encouraged to graze as they stroll.

“The question isn’t what’s edible, it’s what’s not edible.” This is one of the many morsels of foraging wisdom Muskat dispenses in dribs and drabs — in the form of jokes, poems, and even a rap song — as he leads groups of bio-curious out-of-towners through local forests not looking for mushrooms.

“One of the main points I make teaching is to never go mushroom hunting. Otherwise, you are likely to miss the forest for the fungus,” says Muskat. “Instead, I ask, ‘Can you look without seeking?’ ”

When he proffers this foraging koan at the beginning of a hunt near where the Blue Ridge Parkway crosses the French Broad River, the group replies in puzzled unison: “Huh?”

Muskat’s feral philosophy — he refers to himself as a “philosophorager” — comes into focus once the troop heads out and they find that the green curtain of trees and undergrowth that lines the trail veils the forest’s cache of mushrooms, berries, and wild salad fixings. Then, like a woodsy, wide-eyed Willy Wonka, he invites his guests to abandon the pedestrian trail and step inside the wild buffet of the forest. Hot-stepping over thorny greenbrier (whose tender tips and tendrils taste like root beer) and dancing around prickly milk thistle (spicy seeds hide out under its fluff), Muskat peppers his flock of first-time foragers with botanical trivia while fielding a barrage of “What’s this, Alan?” queries from excited, eagle-eyed mushroom hunters squatting over their quarry.

One of the newest mountain food trends is more than a century old — a farming technique with roots in the mountains that’s being reintroduced by outsiders: permaculture.

Textbooks describe the practice with terms like “ecological engineering” and “environmental synergies,” but it sounds a lot simpler when a practicing farmer explains it.

“It’s good for us. Good for the animals. Good for the land,” says Lee Walker Warren, owner of Imani Farm, an organic cooperative farm at Earthaven, a communal ecovillage about 40 miles southeast of Asheville. She’s been at Earthhaven since 2001 and co-founded School of Integrated Living, which gives people who want a taste of off-the-grid homesteading two- and three-month-long immersions into community living and farming.

Behind her, on four acres of pasture carved from the surrounding woods, meat goats muscle each other over tufts of grass, roaster chickens pick through organic feed, and about 100 laying hens huddle together under a coop.

“Eggs from these gals are the best in the area,” Warren says proudly.

Some of the methods used on the farm — such as mobile broiler pens she relocates daily and a chicken coop on wheels — are radically different than those used in modern American agriculture, and raise the eyebrows of locals.

But, Warren says, “When they see us stick with it, respect sort of grows.”

“Locals are much more in touch,” she says. Old-timers, especially, possess knowledge passed down to them through generations, about everything from collecting maple sap to slaughtering animals.

“Here we are, suburban refugees,” she says of homesteaders like herself.

As Earthaven and other similar ecovillages become more a part of the mountain community, longtime residents and new homesteaders share more about farming and culture — sometimes with unexpected results, thanks to unrealistic expectations.

Once, Warren shares, she asked a neighbor how she made her delicious barbecue sauce. She thought she would end up with a true made-from-scratch recipe passed down from grandmother to mother to daughter. Instead …

“I buy barbecue sauce from the store and add Pepsi.”

Dead ends lead to remarkable food finds in the mountains.

About a half hour north of Asheville, among Madison County’s knobs and ridges, creeks and gulches, GPS comes in very handy. Narrow mountain roads branch into narrower dirt roads that turn into gravel lanes that disappear up steep, winding driveways to homesteads — some old and tiny, some recent and sprawling.

Where Laughing Frog Lane ends, Laughing Frog Estate begins. Couples rent the place — all 285 acres, including the estate’s 7,000-square-foot post-and-beam mansion — for secluded mountain weddings. Or, just to get away. Far, far away.

Muskat brings his groups to the estate for private tours and, sometimes, wild-food dinners. His tours usually don’t go much farther than the few acres of forest surrounding the mansion, though. There’s no need: The hillsides boast ingredients for every course, from tangy wood sorrel and peppery money-plant seeds for salads to chanterelles and morels for a main course to dandelion flowers for an after-dinner glass of wine. (While foragers can’t sample dandelion wine made from freshly plucked blooms, there’s likely a bottle collecting dust in the estate’s wine cellar.)

Kelley and Stephen Wilkinson, Laughing Frog’s owners, often forage around the property, too, and sometimes stumble upon unexpected finds, like wild hops thriving at long-abandoned homesteads.

“To find those remnants is so endearing,” Kelley says. “To see back in time, to find the old gifts, is precious.”

The oldest plants at Laughing Frog, though, may be its newest crops.

Kelley has added antique apple varieties to the estate’s orchards and grows heirloom corn in its gardens, including a variety of dent corn that was developed in the South, but has since gone all but extinct.

“The modern food movement is bringing us back to our roots,” she says. “People are discovering that flavor really matters.”