I’m keeping my eye on it. I know what’s at stake. There’s a quahog clam shell on the beach, not far from the water’s edge. When we anchored the boat and hauled the chairs to the back beach of Shackleford Banks, just the tip of the shell was above the water. Now, the clam shell is high and dry. The low waves lap the sand two feet away. Pretty soon, Julie and I will have a difficult decision to make: Get up and move the boat into deeper water, or sit here like slugs until the tide runs out and leaves my boat high and dry.

You’d think that would be an easy call, but right now, with the sun beaming down and my toes in the sand, the prospect of having to dig out a stuck boat seems a small price to pay for another hour of simply watching the tide. And if you’re much of a shore lover at all, you’ll recognize my indecision. Sprawled out on a beach towel, you know it’s coming. You hear the rippling burbles of the surf, each one a bit closer. Maybe a wave washes high enough up the beach to wet your toes. But still, you don’t move. Just another minute, you tell yourself. And then the next wave soaks everything: towel, sandwich, trashy novel, cell phone. There goes your drink koozie.

What were you thinking? It’s not like we don’t know what’s happening. The rise and fall of the tides don’t exactly keep you guessing. But they sure keep you on your toes.

This time of year, along the coast of Cape Lookout and inside Shackleford Banks and Bogue Banks, tides seem to dictate my every summer move. Where to fish, where to boat, where to clam. Whether I can run the boat through the marsh or have to take the long way around to the inlet. Whether the sandbars are exposed so our dog, Minnie, has room to run. When I have to get my lazy self up and move the boat. Can I get to the end of this book chapter before I move my chair? It’s a lot to think about.

Tides were once considered a mysterious force, and the mechanisms that caused the oceans to seemingly swell and recede were the subject of speculation and fancy. As late as the Middle Ages, theories varied. Some figured there was a chthonic reservoir deep inside the Earth that held and released the seas. One of the most beautiful theories of the origin of tides was that the seas rose and fell due to the moon blowing a sort of celestial breath upon the oceans. That would hardly hold up to scientific scrutiny, but I can’t fault its poetry.

At the beginning of the eighth century, Saint Bede the Venerable, an English Benedictine monk with an eye for scientific observation, was definitely on to something. “More marvellous than anything else is the great fellowship that exists between the ocean and the course of the Moon,” he wrote. At the moon’s every rising and setting, he continued, the ocean “sends forth the strength of its ardor.”

The strength of its ardor. And I’ve been accused of laying on the purple prose.

The truth behind the tides, of course, is pretty straightforward. It’s the moon’s and the sun’s gravitational pulls on the open seas that cause the ebb and flow of the waters. Those forces produce a giant bulge in the surface of the ocean, and the tides don’t exactly “roll in” so much as the Earth itself rotates beneath this bulge. “The sea begins to swell, and perceptibly invades the land,” figured another deep thinker, the ancient Greek philosopher Poseidonios. With a name like that, it’s no surprise that his opinions regarding the ocean stuck. 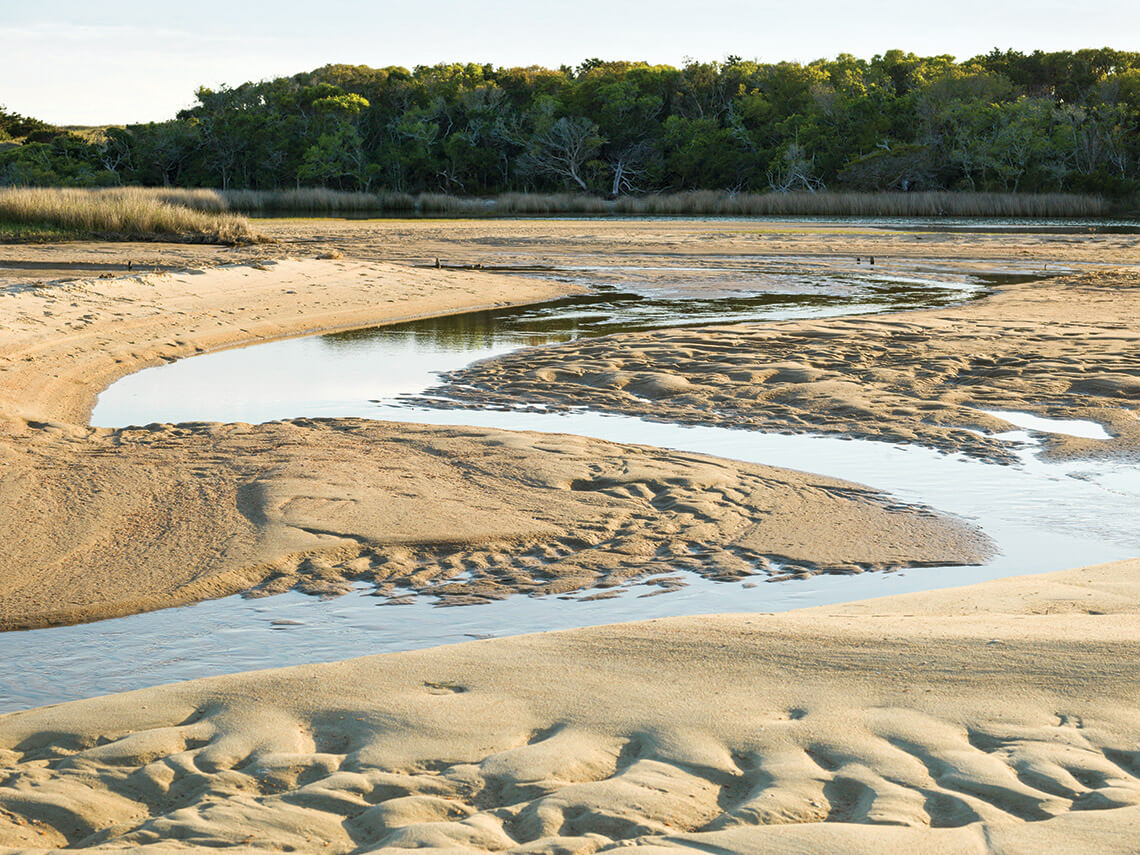 But now, it’s time to decide. Sit here much longer, and we’ll have no choice but to sit here a lot longer. We shuttle the chairs and cooler to the boat. The water that was chest-deep a few hours ago now barely reaches our knees. Maybe it’s a bit past time to go. The back of the boat is mired in the sand.

“Sorry, Julie,” I grin, “but we need you in the bow.” She punches me in the shoulder as she passes, her weight up front just enough to raise the propeller out of the sand. I crank the engine, back away from the beach, and find the deep channel.

On the way back to Portside Marina, we take a side trip and wend through the Drum Shoals marshes. Their margins are armored with oyster beds. Long spits of sand probe the open water. On the tawny sandbars, oystercatchers and terns huddle and hunt. None of these were in view a few hours earlier, as high tide flooded the sound. Now, at low tide, the bones and sinew of Bogue Sound are laid bare. I thread the boat between the buoys, the channel narrow and twisting. I stay in the deep water, where passage is assured.

No matter how many times I run this marsh, I’m always a bit astonished at how the tides can change a single place so completely. There is something strangely reassuring about their impermanence. Variance is the constant. Change is the norm. All the world exists in some sort of flux — waxing, waning, aging, dying, renewing.

And yet, those twice-daily ablutions at the shore seem also to suggest something else. Something nearly the opposite and yet somehow comforting: Some things never change. All is a cycle. We can count on the low tides, just as we can be assured that the waters will return.