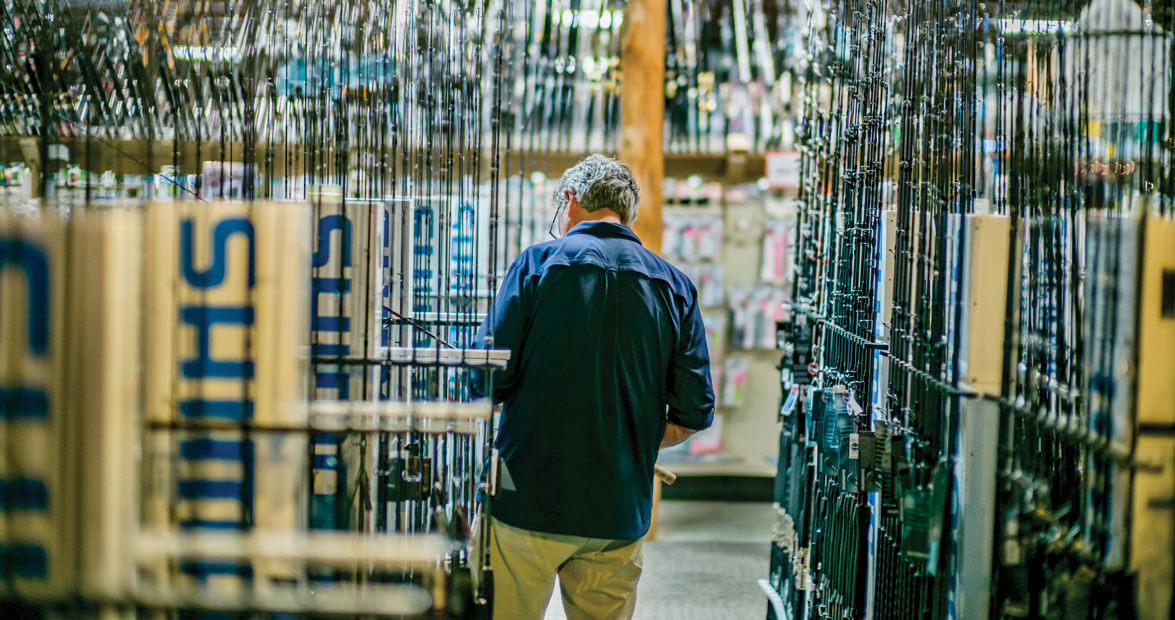 David Tharrington walks swiftly toward the back of Neuse Sport Shop. He usually stops here on the drive between his home in Zebulon and his condo in Atlantic Beach. “It’s a place to hang,” he says, before revealing what may be the true reason for stopping by: “My bladder doesn’t last as long as it used to.”

Ever since the store opened in Kinston in 1953, the restrooms have been a selling point. At the time, people driving the long stretch of U.S. Highway 70 from the Triangle to the Crystal Coast didn’t have many options for a pit stop. So when Bill and Clarence King decided to open a cinder-block store to sell ice and live bait to fishermen heading toward the coast, they played up the restrooms. “We’re a bladder’s distance from Raleigh,” says Russell Rhodes, Neuse Sport Shop’s current president and CEO. 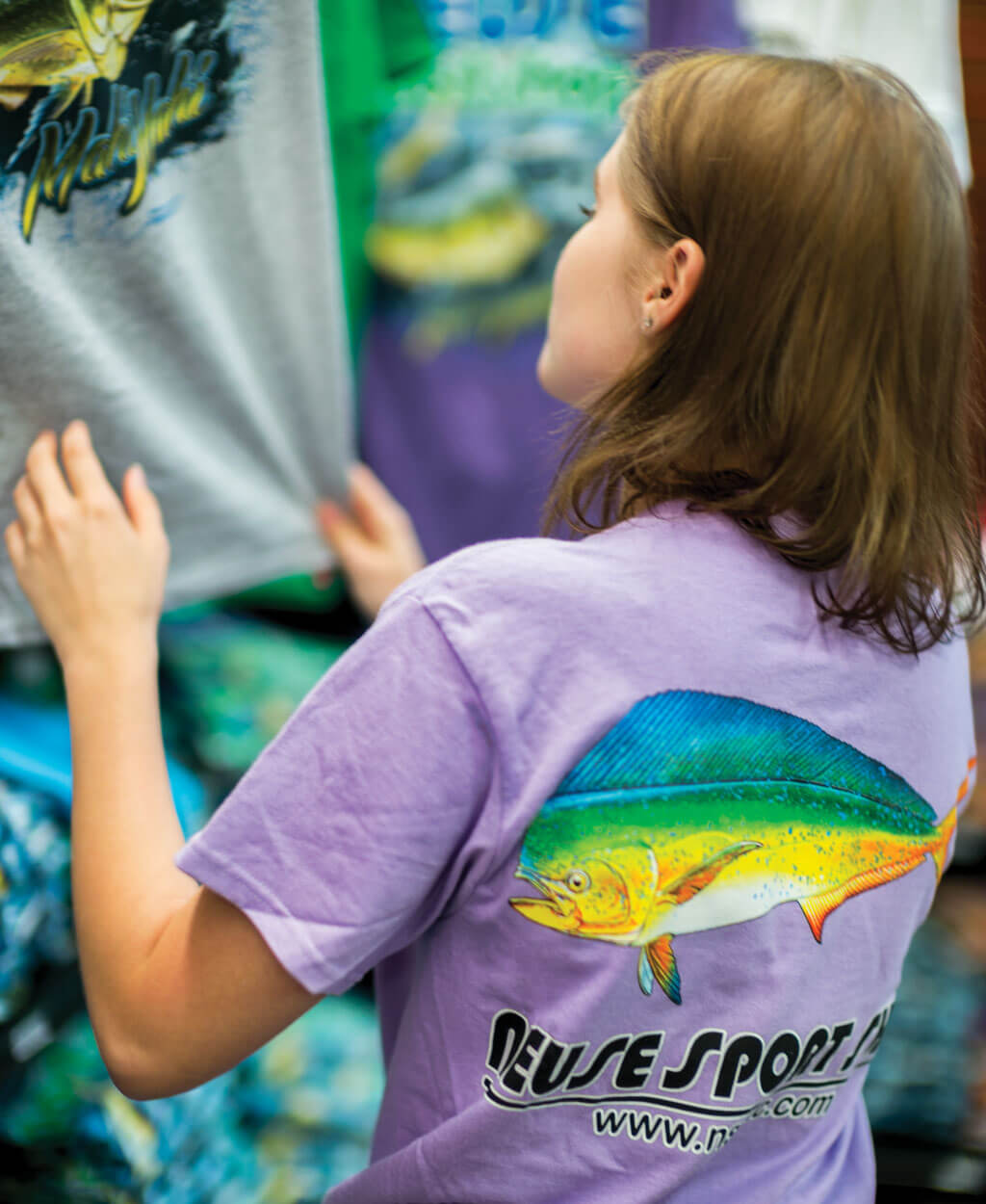 Russell Rhodes, Neuse Sport Shop’s president, also designed the store’s T-shirts, which are ubiquitous across eastern North Carolina. They represent a lifestyle, he says, but also, “it doesn’t hurt that they’re $8.” photograph by Charles Harris

The once-small store has expanded and today covers an area almost the size of one and a half football fields. Some billboards — there are between 18 and 24 out on Highway 70 — still mention restrooms, but many simply announce the name of the store next to pictures of a variety of sporting fish. “We don’t overpromise,” Rhodes says, but that’s easy to say when you have almost everything an outdoor enthusiast would need to hunt, fish, or camp, all under one roof.

In the fishing section, a bearded, nine-year employee named Spencer Hodges helps an older customer who is looking at baits but unable to locate what he’s calling a “disco chicken.” It’s not a brand name: Other shops have unique names for different styles of lures, and it’s up to Hodges to try to find a close match for whatever a disco chicken might be. It must be shiny, he concludes, and he suggests a bait that’s close enough. Some fishermen are superstitious, he says. Others are schemers. Before tournaments, they’ll buy out entire styles of baits so that others can’t get them, or they’ll swap out tags to throw off other competitors. “Fishing is about your confidence level,” Hodges says, before adding,  “Speckled-trout people are super-secretive.”

There’s a large hunting section as well, and in the back is an indoor gun range, soundproofed so well that you need to be fairly close to hear the shots ringing out. It’s high-tech, safe, and designed to keep gunsmoke away from shooters. “A million- dollar room,” Rhodes says. In short, Neuse Sport Shop is a temple to the merchandise of nature. But sometimes, nature gets angry.

In 1999, when Hurricane Floyd hit, Rhodes wasn’t too worried. His store wasn’t in a floodplain. He returned afterward to find 21 inches of water from the Neuse River inside. With no flood insurance to help, Floyd nearly killed the store.

So Rhodes and others came up with a plan for the next hurricane. They didn’t have to use it until 2016, when Hurricane Matthew approached. Employees loaded up almost everything in the store onto 18 tractor trailers and trucked it all to a safe, dry place. The storm put 31 inches of water into Neuse Sport Shop, and when the flood finally receded, employees and volunteers swarmed back in, squeegeed out the water, restored the power, replaced the carpet, reassembled the shelves, and restocked all of the merchandise. The maneuver cost more than a million dollars in manpower, trucking costs, wages (employees are paid through the storms), and lost sales. Flood insurance only covers around $500,000. That’s why Neuse Sport Shop opened a second location in Carteret County: to be, among other things, a hedge against storms. It’s four feet above the floodplain, and the idea is that at least one store could stay open if the other is closed.

But in Kinston, mere weeks after Hurricane Florence put two feet of water in the store, nothing looks out of place. The registers are up and running; employees in blue shirts are helping customers look at shotguns, deer corn, and fishing rods; and the sounds of whirring fans and hammers have been replaced with soft rock music and the gurgling of tubs full of eels, minnows, and other live bait. It’s a large place, with lots of stuff, and a lot of knowledge in the aisles. A lot of shared experience. “A fisherman knows when he’s talking to a fisherman,” Rhodes says. Same with a hunter. Same with someone who’s survived a hurricane. “You know how to talk that talk.”