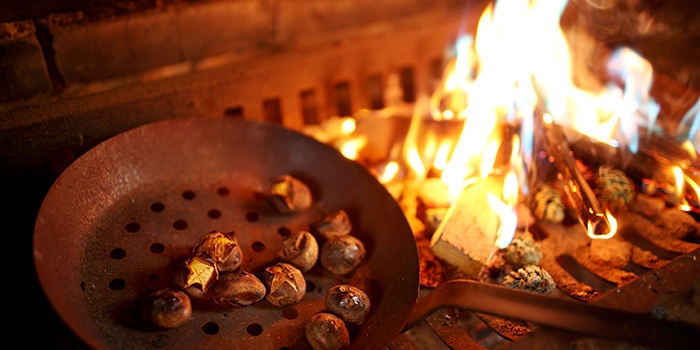 To walk among these trees is to feel a connection, both physical and emotional, to a long-vanquished natural wonder. They stand here, row upon row, inviting not only inspection, but also contemplation. This Piedmont hillside, a few squirrel jumps from the Haw River, is a rare domain for this once-ubiquitous denizen of the deep woods.

The trees are descendants of the American chestnut, a once-soaring hardwood that commanded awe. In most of our lifetimes, chestnuts have been consigned to black-and-white stills or warm-and-fuzzy yuletide carols. Because, in the first half of the 20th century, a fungal disease known as chestnut blight wedged itself into the trunks of American chestnuts, blocking channels for water and nutrients, choking the trees to death. Wind, rain, and birds spread the disease like a cancer across North America, killing billions of chestnut trees.

But here at High Rock Farm, on the outskirts of Gibsonville in Rockingham County, chestnut trees are living, thriving, spreading roots, and bearing fruit.

These vestiges of the great Eastern woodlands claim this ground because of a man who speaks in an accent born of the Southern plains, a man who fancies a fedora, and who has his livelihood and name embroidered over his button-down shirt pocket: “High Rock Farm” and “Richard.”

New life for a farm and a house

“We’re trying to introduce the chestnut as a food item in the American cuisine,” Teague says of his 45-acre farm, where 500 chestnut trees occupy 20 acres. He and his late wife, Rolfe, bought High Rock Farm in 1990 through Preservation North Carolina, a nonprofit that seeks out buyers to restore historic sites. Established in 1807, the farm’s centerpiece is a three-story brick house with stately white columns and a sumptuous garden of roses, tulips, hollies, magnolias, shrubs, a footpath, and a fountain. “My wife spent 20 years fixing up the house, and that’s the important part of why we’re here,” Teague says. 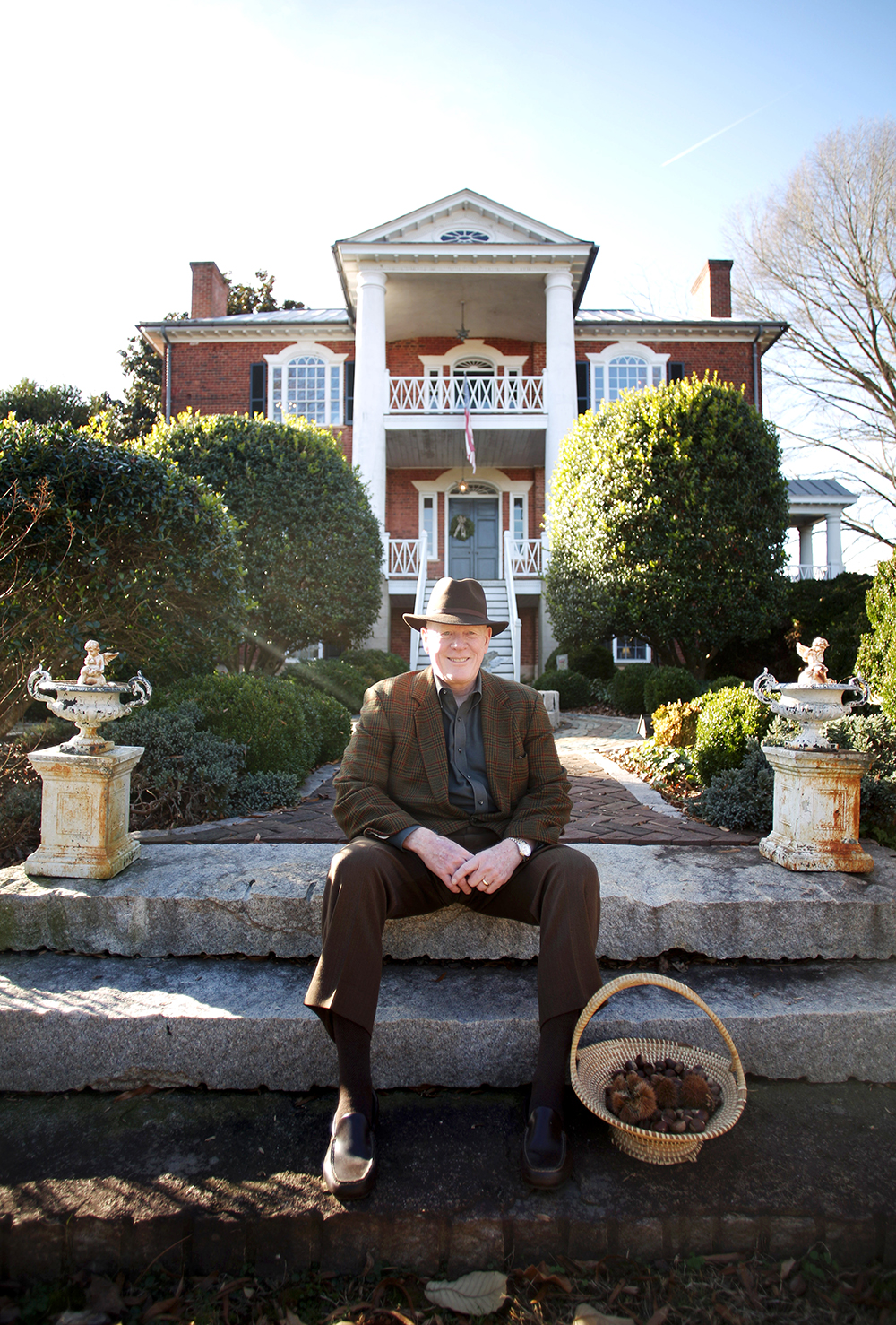 Since 1990, Richard Teague has been the keeper of the more than 200-year-old High Rock Farm. He bought the property through Preservation North Carolina, which required him to maintain the site as a farm. He’s now planted 20 acres of chestnuts and has restored the stately three-story home. photograph by Travis Dove

The Preservation North Carolina covenants require that he and his wife maintain the agricultural nature of the site, so Teague planted pecan trees and, in 1994, branched out to chestnuts. But these chestnuts aren’t the lofty specimens of yesteryear, with wide-girthed trunks that stood bare of branches for 50 feet or more. Like their forebears, these trees have leaves with a glossy, deep green surface and serrated edges, but they’re squatter in stature. They’re a variety known as the Dunstan (a cross between the American chestnut and its Chinese counterpart), and, above all, they’re resistant to blight. Dunstans grow roughly 50 to 60 feet tall, less imposing than the wild American chestnut, which grew rapidly (typically four feet a year) to heights of well more than 100 feet.

Although the trees are safeguarded against blight, they still have a menace in the chestnut weevil, which requires the routine spraying of insecticide. Deer, who like to nibble at the nuts, are another nuisance. Even so, with the creation of this hybrid, the storied chestnut is making a rousing return at places like High Rock Farm, which boasts the largest still-producing orchard in the mid-Atlantic region, bearing about 26,000 pounds of chestnuts a year. This new breed, Teague says, is more conducive to being raised in an orchard, unlike the original giants, whose nuts were often too high for picking. “The American chestnut tree was primarily a timber tree,” he says. “You don’t want something 100 feet in the air to get nuts.”

A new breed of chestnuts

The nuts are cocooned in husks. From a distance, they’re woolly-looking things, pale green and glinting in the midmorning sun, adorning the trees like fur balls. But what appears woolly from afar turns out to be as prickly as a sea urchin. “You’re not gonna mess with that on the tree,” Teague says.

During harvest season, which begins in mid-September and runs for about a month, the trees shed these bristly balls for the farm’s hired hands to pluck from the ground. A husk contains up to three nuts, each the color of mahogany and about the size of an egg yolk. Peel off their skin, and you can eat them raw. “It has the crunch of a carrot but the taste of lettuce,” says Fishel, the farm manager in charge of processing the nuts. And, yes, as told through songs and sentimental journeys, you can roast it. Around here, chestnuts roasting on an open fire is more than just a lyric. Take a scoring knife, carve an X into the skin to provide an opening, and, well, watch the chestnuts pop. “As it cooks, it expands,” Fishel says. “Do it real slow, where it cooks throughout the whole nut, and it’s almost like a potato. I put on olive oil and seasoned salt. It’s real good.”

All of High Rock Farm’s chestnut preparation — they must be washed, heated, cooled, graded, and sorted into small, medium, large, and extra-large sizes — takes place in a big white barn, complete with pointed gables and a silo. The farm hosts a chestnut-roasting festival here every November, at the end of harvest season. For the remainder of the year, High Rock Farm chestnuts are sold in 53 stores, “from Duck to Boone,” says McAlister. They’re also available for purchase online, along with chestnut flour and dried chestnut kernels, which you can use in meats and baked goods.

Before taking the short walk from the orchard to the barn, Teague holds out a chestnut. It shines like varnished wood. He says keeping a chestnut in your pocket the whole winter through is supposed to bring good luck.

But luck seems too flimsy, too temperamental a yield from this steady hand and the undying orchard behind it. Here, you realize: Come bug, beast, or blight, these trees have staying power. 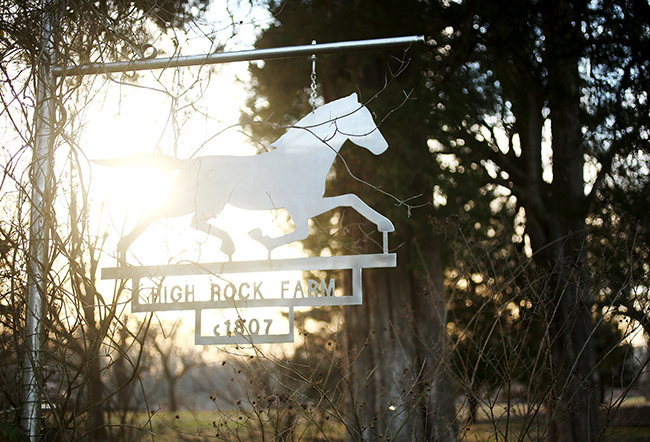