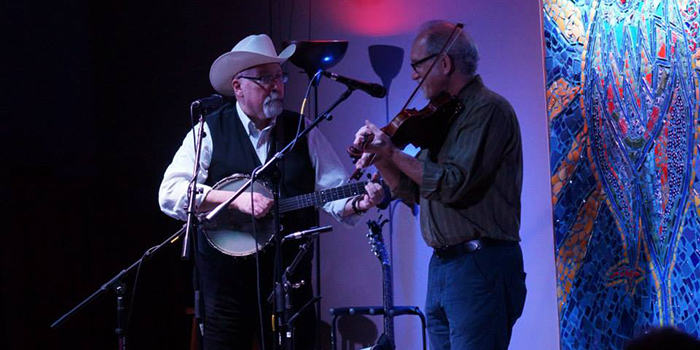 Five years ago, Joe Newberry got hired to play a gig with some friends. Their bluegrass band, Big Medicine, was not the star of the Raleigh show. In fact, its role was to play in the background to keep book-buying fans entertained while they waited in line for Garrison Keillor’s autograph.

The banjo-playing Newberry never imaged that Keillor, the music-loving host of A Prairie Home Companion, would become one of his biggest fans.

“He’s a better musician than a lot of legends were, if you want to know the truth, and meanwhile he carries on with a good heart carrying old music into the future,” states Keillor, who has hosted countless string band greats for nearly 40 years on his popular radio show. He recently invited Newberry to make his seventh appearance on June 14. Newberry will also join Keillor and a roster of distinguished performers for Prairie Home Companion’s upcoming 40th Anniversary Celebration.

“Our music and literature carry the gist of what’s worthy about our people. I believe that,” Keillor adds. “A musician like Joe embodies the true South. You can’t have too many of these people.”

Newberry still gets goose bumps thinking about the moment Keillor left his desk and walked over to join them in singing The Lone Pilgrim, a tune recorded by North Carolina’s Watson Family in 1963. “Afterwards, he said he would like for us to be on the show,” Newberry recalls. “We were thrilled but assumed he was just being polite.”

Big Medicine soon received an invitation to perform on A Prairie Home Companion broadcast from the Durham Performing Arts Center. They were onstage again when Keillor returned to North Carolina for a show at Cary’s Koka Booth Amphitheater. Keillor asked Newberry to play Rambling Hobo in tribute to Deep Gap legend Doc Watson, who died just weeks before, and The Ace for Tommy Thompson, the original banjo player in Durham’s Red Clay Ramblers. Newberry sat in on banjo several times at Ramblers shows after Thomspon’s death in 2003.

The award-winning A Prairie Home Companion, which reaches four million listeners on public radio stations around the globe most Saturday nights, has changed Newberry’s life. “For a traditional musician to be invited as a solo performer,” he says humbly, “it must be the same feeling a comedian got when Johnny Carson invited them to the couch.” 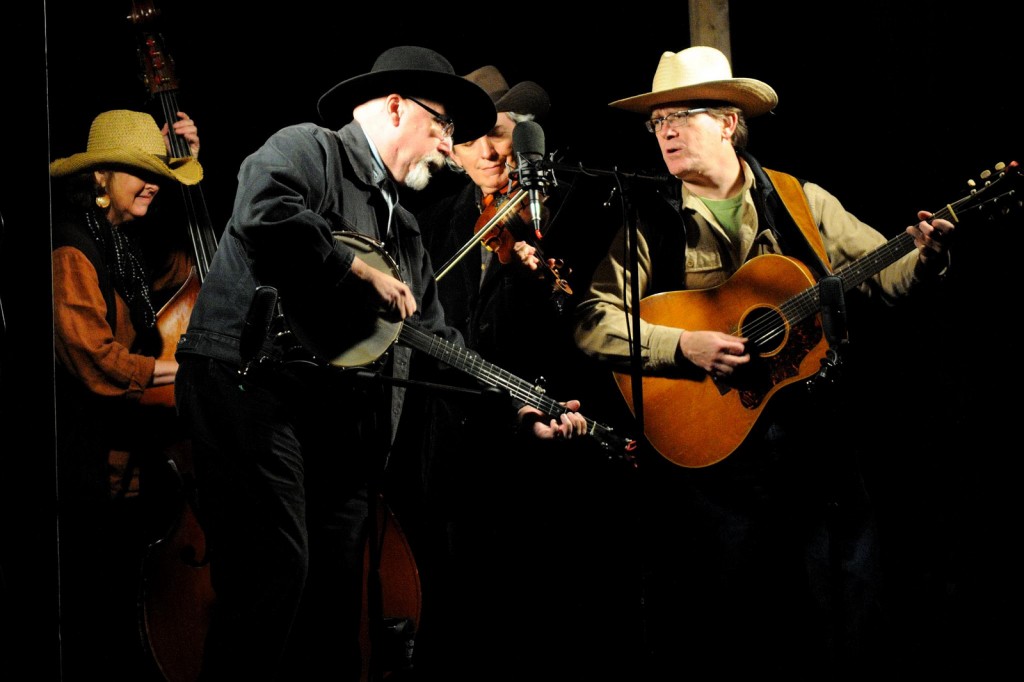 Like most success stories, Newberry’s has deep roots. He’s been playing guitar and making up songs pretty much since he started walking and talking. His first concert was an impromptu performance, played in pajamas at age 5 when he was supposed to be in bed, for audience of his aunt and uncle’s party guests. From the landing of their Missouri home, he delivered a sober rendition of On Top of Old Smokey. Amid their applause, he nodded his thanks and silently returned to bed.

Not long after, he took on the Kingston Trio classic Hang Down Your Head, Tom Dooley, which coincidentally is based on the 1866 murder of a Wilkes County woman. But instead of poor Tom, the pint-sized guitar slinger changed the lyrics to feature Bugs Bunny.

It was, perhaps, the moment that sealed his fate as both a career musician and future Tar Heel. 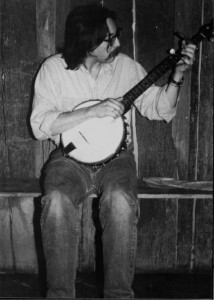 Newberry, now 56, did not land in North Carolina until 1982. He first enrolled in the University of Missouri at Columbia, where he earned a degree in history and communications. But he spent most of his time in his room playing the banjo. His dedication impressed the manager of The Chez, where musicians performed in the basement of a campus ministry.

“I was invited to move in and help manage the coffeehouse,” Newberry says. “It was the place where I started thinking it might be fun to play music for a living.”

Newberry recalls the difficult phone call made to his father, a distinguished and eloquent judge, to say was dropping out of graduate school and moving to the Ozark Mountain Center to study music full time. “He didn’t say much,” he recalls, “but then I heard a real, honest-to-God wry chuckle.”

Newberry connected with banjo legend and humorist Louis Marshall Jones – better known as Grandpa Jones, a charter member of the television show Hee Haw – and others who were serious about their craft. He stayed on until he was called home after his mother’s death.

He remained with his dad for several months before accepting a friend’s offer to visit North Carolina. He drove across country and arrived in Bynum, near Pittsboro, on a cold day in January. His friend took him to a party that warmed his soul and still blows his mind. 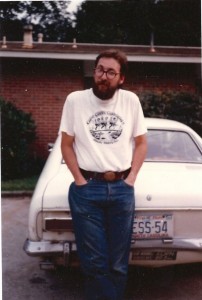 Newberry with car that broke down leaving him in North Carolina. photograph by Joe Newberry

“That first night set the direction of my life to come,” Newberry says of a gathering held in a big wood shop. “I thought to myself, that guy fiddles just like Bill Hicks from the Red Clay Ramblers. And it was. At that party were people who have become lifelong friends and musical partners.”

Newberry hadn’t planned to stay long, but his car broke down and the repairs were expensive. He took a job to make some cash. Before he knew it, he was hooked.

“I had made so many friends that I chose to make a life here,” he says. “I always tell people: I wasn’t born in North Carolina, but I got here as fast as I could.”

Newberry always had day jobs to pay the bills while playing music on the side. He wrote for a newspaper and promoted the arts, first through the North Carolina Arts Council and later with the state’s Department of Cultural Affairs. He currently serves as communications director for the North Carolina Symphony, which has featured him as a performing artist.

Much of his life beyond the 8-to-5 work day is immersed in making music. He performed and recorded with surviving Red Clay Ramblers as Craver, Hicks, Watson, Newberry. The partnership led to some extraordinary experiences, including performing at the 2006 funeral of Janette Carter, founder of the influential Carter Family Fold. They previously played the legendary venue, located in Poor Valley at the foot of Clinch Mountain in southwest Virginia, following a brief set by the ailing Johnny Cash. One of his last public performances, it was just weeks after his beloved June Carter Cash died in 2003, and a few months before his own passing.

“They got him offstage and to his car and they drove away. And then Janette takes the mic and says, ‘Now please make welcome, Jim Watson, Bill Hicks, Mike Craver and Joe Newberry,’” says Newberry, still incredulous. “It was surreal.”

Newberry continued to teach banjo at bluegrass camps and established several other remarkable partnerships, including one with mandolinist Mike Compton, considered by many to be the best American bluegrass player since Bill Monroe. When Compton filled in at the last minute after Newberry’s partner had to cancel a show in Charlotte, they clicked like brothers. Their 2012 album, Live, earned high praise from critics. 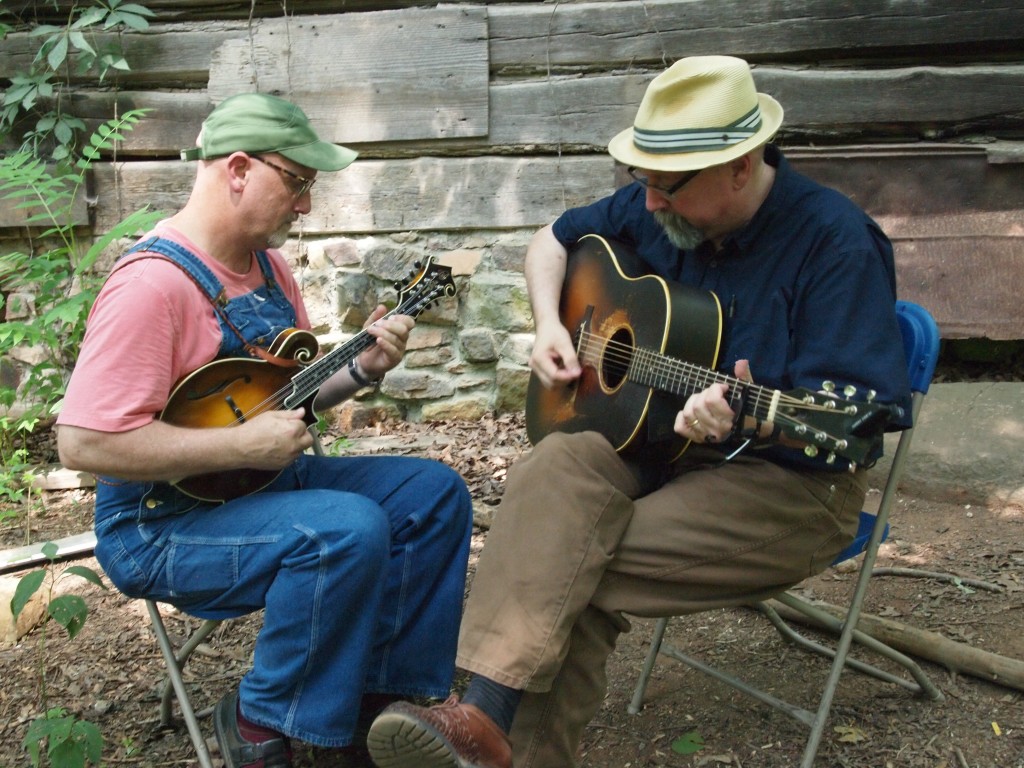 Perhaps as a result of spending more time on the road, Newberry also has dedicated himself more fully songwriting. His comfort zone is gospel and traditional Americana, much of it telling tragic tales lifted by haunting melodies. Inspired by a story of loss, he recently wrote a heartbreaking song about a widow’s loneliness. The story unfolds from her point of view, and an impromptu performance in the den of his Raleigh home fills his eyes with tears.

There is little in the cozy house he shares with his wife, Susan – retired executive director of PineCone, the Piedmont Council of Traditional Music – to suggest that a world-class musician lives here. His instruments, including a folding guitar used for travel, are tucked in a hall closet. However, flanking a small television in the den is his banjo and a pair of crystal obelisks, consecutive year songwriting awards from the International Bluegrass Music Association (IBMA). 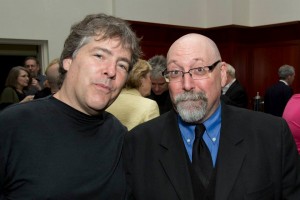 The awards came from songs Newberry wrote for and with the Gibson Brothers, who were honored by IBMA during ceremonies in Raleigh as 2013 Entertainer of the Year and Vocal Group of the Year. Their achievement came, in part, from the success of They Call it Music, which Newberry co-wrote with Eric Gibson.

Previously, Newberry was awarded for Singing as We Rise. He says the song practically wrote itself after someone commented to him about hearing larks greet the sunrise at a music camp in England. “He said to me, ‘Did you hear those larks this morning? They were singing as they rose.’ It was like a little bell rang inside my head,” Newberry says.

The song was finished by nightfall and debuted at the weekly staff concert. Eric Gibson wanted it as soon as he heard it. “Later he called to ask me to if it was OK if they got Ricky Skaggs to sing on it,” Newberry says, shaking his head and laughing at the memory. “Yes, it was definitely OK with me.”

Newberry has written another tune for the Gibsons and is busy practicing songs he might perform in June for A Prairie Home Companion.

“I know that I will offer a couple of banjo tunes, an original song or two, as well as a couple of Missouri-themed songs in honor of playing in St. Louis,” Newberry says. “But, whatever I end up playing, like Minnie Pearl always said, ‘I’m just so proud to be here.’”

Jill Warren Lucas is a freelance writer from Raleigh who is fortunate to count Joe Newberry among her dearest friends. Her last piece for Our State, published in March, was about the joy of eating chicken and waffles in the Triangle. Watch for her profile of Chef Ricky Moore, of Saltbox Seafood Joint in Durham, in the May magazine.

Live at Our State: Joe Newberry