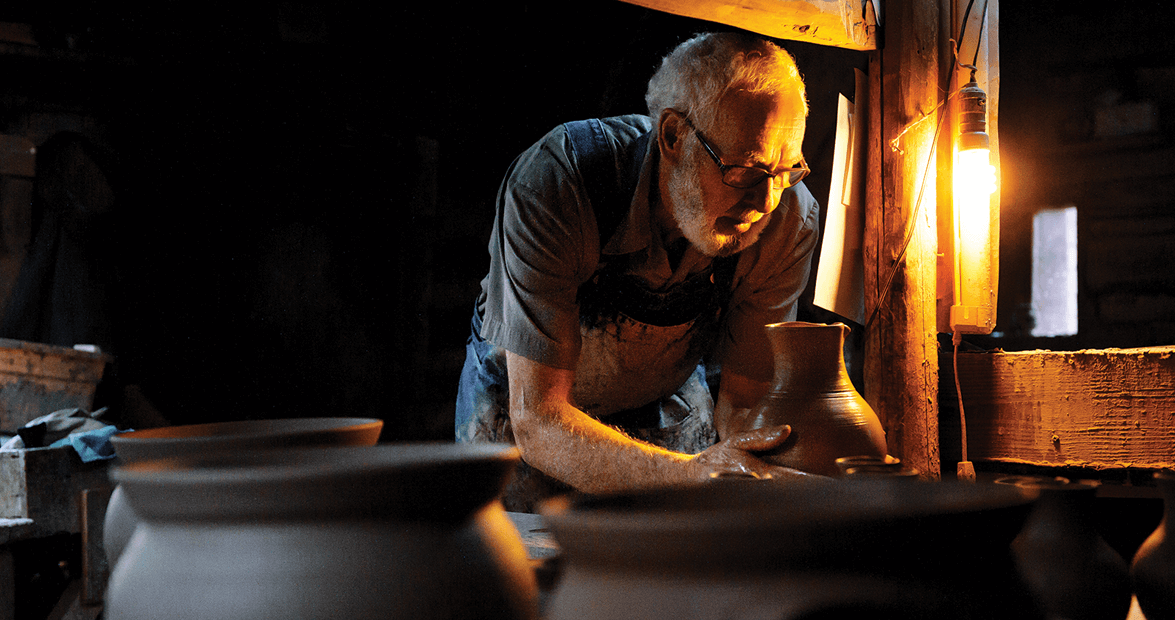 Vernon Owens looks awesomely tall as he steps through a five-foot doorway. He’d look tall crossing a normal, seven-foot entrance, but now his hunched shoulders and bent back — contorted in the shape of a shepherd’s crook — make him seem enormous. The apparent giant stoops beneath the doorway, stepping down one leg at a time into a room with a dug-out dirt floor.

The floor sinks a foot or so into the earth. The ceiling above is low and slants at the angle of the roof. All together this room is cramped, but it’s just enough space for Vernon to stand upright.

“This is my turning room,” Vernon says as he straightens his body. He looks taller now than before. His frame is slender but strong.

With a sturdy hand, he gestures to an electric potter’s wheel in the center of the room. A single lightbulb mounted a few inches above the wheel casts bright, narrow light on the work space like a desk lamp. Beside the wheel is a plastic pan of slip, a mixture of clay and water that a potter uses to wed two separately formed parts, such as a handle to a mug.

Vernon looks down at the spot where he performs his craft with a glint of excitement in his eyes. While his demeanor is laid-back and his speech is halting, a few subjects rouse him to degrees of conviction and self-assuredness. Pottery — his life’s work — is one of them.

“There’s no doubt in my mind that my grandfather, back when he was alive and making pottery, if he’d of had the opportunity to have an electric wheel, he’d of had one,” Vernon says, his voice rising. “He wouldn’t have used a kick wheel and worked himself thin.”

Vernon doesn’t hold as much goodwill for other technological advancements, especially computers.

He explains all this and then eases into a chair and spreads his long legs wide. His eyes look heavy behind a pair of large-frame glasses. It seems he could fall asleep, wearing his Pointer-brand overalls and flannel overshirt. But he stirs as he speaks about his wish that the many potters in and around nearby Seagrove, a well-known potters’ colony, wouldn’t fight over which one of two pottery festivals to support. Reaching a hand up to his full, white beard and rubbing his chin, he says he’s in favor of anyone willing to promote and preserve the centuries-old tradition of pottery making here in a rural outpost of North Carolina’s Piedmont.

He knows the tradition well. When he bought this place, Jugtown Pottery, in 1983, he’d already been a potter here for more than two decades. Enough time for Vernon to learn the names of the artists and potters who lived and worked here before him. Among them, the people who built his snug turning room. Of course they couldn’t have known then that Jugtown would one day end up in the hands of a tall man.

In 1921, Jacques and Juliana Busbee built the workshop that’s now Vernon’s turning room. A few years before, in 1917, they started Jugtown Pottery in northern Moore County.

The Busbees were educated and worldly. Jacques studied art and design in New York City. Juliana was a photographer and chairwoman of the art department of the Federation of Women’s Clubs of North Carolina.

Local lore says the couple went to Moore County to trace the origins of an orange pie dish that they’d found at a county fair elsewhere in the state. When they arrived, they found only a few potters still dabbling in the old traditions. The American Industrial Revolution had been crippling. Factory-made pottery simply cost less.

Years before, in the 1700s, immigrant potters from England and Germany came to the area and soon discovered the usefulness of the clay. They carved it from the earth, let it dry, pounded it to pieces, and molded it.

These early potters made butter churns, pickle jars, pitchers, and plates. Because most of them were poor, each piece needed a real-world function. The artful, bright glazes and decorative wares came later.

The Busbees helped nurture the craft to that glory. They moved into a log cabin on the Jugtown site. There they built the workshop and wood-fired kilns. In New York, they opened a Greenwich Village tearoom and a store on the Upper East Side to sell what Jugtown potters made.

The movement grew beyond Jugtown, and soon the area experienced a pottery revival that continued for decades, turning a craftsman’s job into a viable career.

In 1960, Vernon Owens started working at Jugtown. He was a local boy who lived on the opposite side of the woods that backed up to the pottery. Each morning, he walked a path through those woods to get to work. It’s the only commute he’s ever known.

But Vernon always knew he wouldn’t have to go far to practice his trade. The Owens name was, and is, synonymous with pottery in North Carolina. So much so that the family name has been debated. Originally just the Owen family, without an “s,” two generations ago Vernon’s branch of the Owen clan decided the name sounded better, for branding purposes, with an “s.”

Since it’s the potter’s prerogative to sign or stamp whatever he pleases on the underside of his work, Vernon keeps the “s.” Regardless, he’s of the same blood as the first potter hired by the Busbees at Jugtown, Vernon’s grandfather J.H. Owen.

Vernon rises from his chair and straightens his body again. He walks over to a blackboard that hangs behind his electric potter’s wheel. He briefly studies the orders he’s scribbled on it in red chalk. Then he excuses himself to go finish working on the privacy fence he’s building to protect Jugtown, specifically its tidy museum, from the traffic passing on a lazy, country road. He says the Department of Transportation mowed too much underbrush last spring, leaving Jugtown with barely a buffer.

This was reason enough for a craftsman to go to work. Vernon layered one board on top of another on top of another to create a cross-weave design. The new fence is high and beautiful. He says he had a picture of what he wanted in his head and let his hands do the rest.

Imagination and skill run in the family. Vernon’s wife, Pam; their son, Travis; and daughter, Bayle, are all talented potters who each turn out their own unique pieces. Vernon assembles mugs, candlesticks, and serving dishes, among many shapes. Travis is known for throwing large vases, some of which become lamp bases. Pam crafts animal figurines and teapots. Bayle creates bowls and plates. She also weaves on a loom in the museum and sells what she makes in the gift shop.

Together, the Owenses manage to run the business without any perceivable annoyances with one another.

“This is where I work,” Travis says, pointing to a doorway graciously tall enough for his height.

The 27-year-old steps inside onto a dug-out dirt floor packed with gravel. This turning room is newer than Vernon’s but otherwise resembles it in every way. He gives a cursory tour of the space. It’s clear he’s eager to get someplace else. Travis comes to a doorway connecting his turning room to another. He walks through the doorway and steps down onto a familiar dug-out dirt floor. The ceiling above slants down at the angle of the roof to a low door. Travis is in Vernon’s turning room.

He stands in this room and talks about pottery in much the same way his father does. Like Vernon, Travis is laid-back, inventive, and smart. He dresses like Vernon, too: Pointer-brand overalls and a flannel overshirt. He could be Vernon, and one day he will be. He will appear big like him.

Travis looks down at the light focused on his father’s potter’s wheel and says how lucky the Owenses are to own Jugtown. The converse may be just as true: Jugtown is lucky to have owners like the Owenses.

Because in this family there seems to pass, from one generation to the next, the immutable ability to mold the earth.