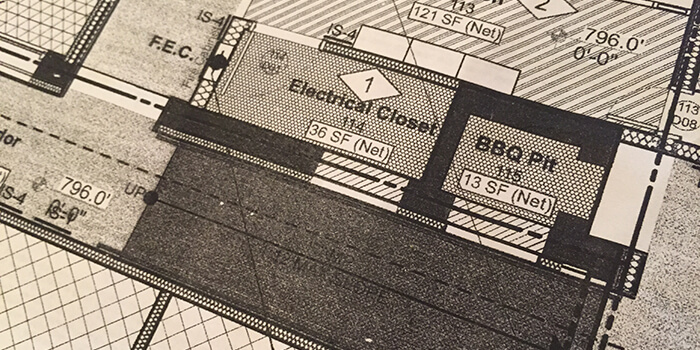 If you don’t remember what Lexington is known for, you’re reminded as soon as you breeze into town. The signs are up for the Bar-B-Q Center coming in on U.S. 64 from the east. Speedy’s sits just inside the northern city limit on Highway 8. Smiley’s is a little farther down the road. Then there’s the biggun, Lexington Barbecue, the “Honeymonk” as the locals call it, just off the bypass. Roll your windows down. Smell the smoke.

“You got Smokey Joe’s down on Main Street. Then you got Jimmy’s, but I think Jimmy was selling out,” says Oliver Vinson, a local with a black and white beard who says he’s 60 but looks a decade younger. From a sidewalk in uptown Lexington, he talks and turns and points like a wizard casting spells. “Another one just opened on 5th Avenue,” he says, turning and pointing. “It used to be John Wayne’s, but I don’t know the name of it.” (It’s Billy’s Hendrix Pit Barbecue now.)

Vinson does not point at the building in front of him, which may be the most wholly uninteresting-looking building in town. Sure, the halls of City Hall are lined with Barbecue Festival posters going back to the first one, in 1984, and there’s a little pig statuette across from the municipal cashier’s desk, but the outside is just boring, a squat one-story yawn of an office with a pointed gray roof and white stucco that sounds hollow when you tap it. And even here there is barbecue, archaeologically speaking. “They found the pit,” Vinson says, really punching the last word.

Earlier this year, some demolition guys were gutting the section with the mayor’s office in it and pulled some Sheetrock off the wall in front of what the mayor had always thought was a closet. But when the drywall and boards came down, they discovered rectangular holes in the blackened brick. Then they pulled more stuff down, and exposed the beam above the openings still covered with rippled char, and still vaguely smelling like burnt hickory. And the second-term, well-dressed mayor with perfect hair, Newell Clark, 43, who’s been telling people for years that this building used to be an old barbecue joint, had a little I knew it moment, and then started looking for the drama and the irony. They’d planned the Barbecue Festival, he said. In. This. Very. Room. “We were three feet away,” Clark says, leaning up against the wall. “I would literally be leaning against the wall here, talking to people, not knowing I was leaning against the barbecue pits.” His city’s original barbecue pits.

Sure, Sid Weaver was Lexington Barbecue’s Abraham, first cooking up his barbecue in the alley outside and selling it from a tent to people heading over to the old courthouse in 1919. But it was Alton Beck who gave ‘cue a permanent home. He worked for Weaver before starting the first bricks-and-mortar barbecue restaurant in town on West Center Street in 1938. He rebuilt the place 11 years later. Behind the wall? Those are Beck’s pits, believed to be from the early 1950s, revealed for the first time in decades.

Keith Wright — they call him “Bubba” up at the Honeymonk where he works — would get the hot dog special there at lunchtime when he was a kid. He saw the pictures of the old pits and immediately knew what they were. “You go back to ours, take the doors off,” he says. “They look exactly like that.”

After 31 years, Beck retired, and some other barbecue guys, the Stogners, took over. But then that place closed and was replaced by the Jailhouse Restaurant, a sandwich-and-grill place that had no need for the pits. They were hidden with plywood and two-by-fours. Then the Jailhouse closed, and in the ‘90s, the city subdivided a big open space into offices and conference rooms decorated with municipal chic. It wasn’t that people didn’t remember Beck’s Barbecue, and maybe they knew the pits were still back there, but it just didn’t look like a restaurant in there anymore. They just forgot, in the same way that you’d forget the layout of an old house. Barbecue got bigger and Beck’s just faded into the deepest abyss of memory, with nothing to pull it back up to the surface.

But then they found the pits at City Hall. And now they’re all anyone can talk about.

Wright knew the pits were still back there, he brags. Knew it all along. Vinson, who’s African-American, remembers having to walk in the back door at Beck’s until around, he thinks, 1969 or so. He didn’t go in there much. When Clark first walked into the gutted innards of his office, he saw the beams, broken tile, and brick all exposed, and bang, the memory of being a kid and eating there with his father came rushing back.

People in town stick their heads in the door. They ask to see the pits. They remember the layout. Booths here. Tables there. Counter over there. Clark’s not sure how he’s going to handle visitors going forward. He’s changing the blueprints a little to accommodate them. The pits sit next to what was going to be a hallway, so he might just put them behind glass, museum-style. Maybe. He doesn’t know. The renovations have to be finished by October, around the time of the Barbecue Festival, so he’ll figure something out by then. Clark knows they won’t be cooking barbecue in there ever again. It’s illegal, actually. The city council passed an ordinance banning open flames in uptown Lexington.

In the meantime, in comes another lookie loo.

It’s Nancy Hartley, who works over in customer credit, about 20 feet away from the pits on the other side of the wall. She used to eat at Beck’s with her mother-in-law, who worked for the bank. Completely forgot about it. And then Hartley saw the pits.

“They’re gonna keep this?” she asks, over the sound of pounding hammers. The answer’s yes, because in a town built on barbecue, the story, much like the red slaw, is now unforgettable.