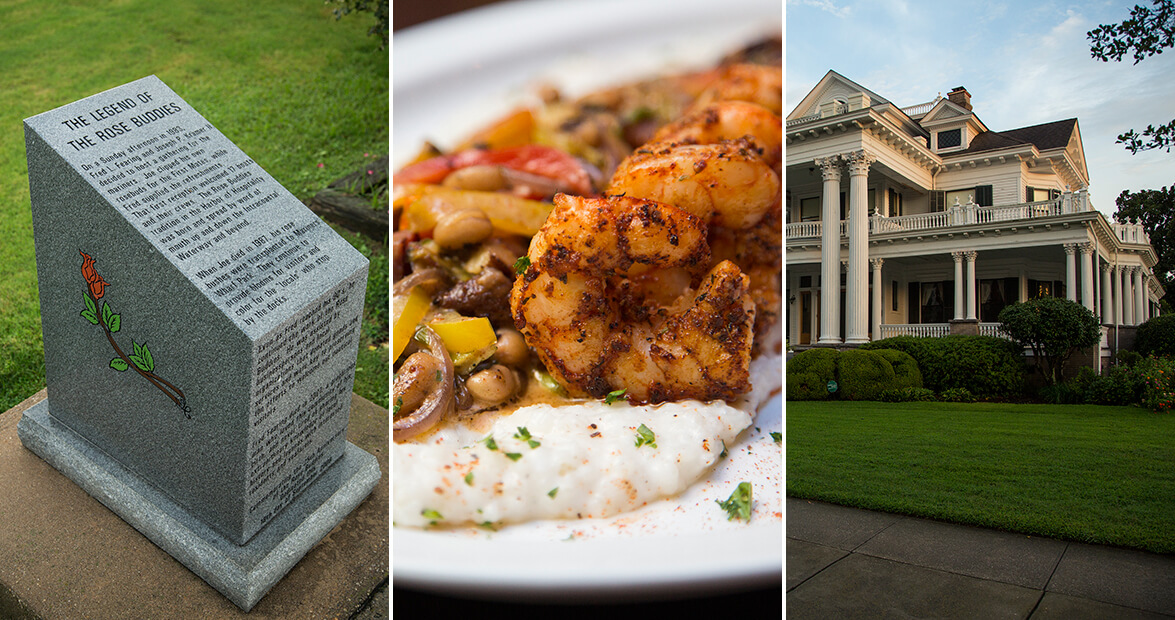 Soak in the history of the “sweet tea waters”

Water has always played a pivotal role in Elizabeth City’s identity. The town’s surrounding waterways were used primarily for industrial and transportation purposes in its early defining years, though as the city experiences a rebirth, water has once again proved its importance — this time as a recreational element. Routed along the Intracoastal Waterway, Elizabeth City has gained a notable following in the national and international boating communities for its free 48-hour docking policy. It is also known for its Rose Buddies program, a welcoming reception that started in 1983 by two Elizabeth City residents, where visiting boaters were given roses and greeted with wine and cheese parties. North Carolinians looking for an aquatic adventure — albeit on a smaller level — can visit Elizabeth City by following the Albemarle Loop, or if you’ve arrived into Elizabeth City sans-boat, fishing tours and sailing excursions can be arranged. However, even if you’re unsure of your sea legs, a visit to Mariner’s Wharf is only fitting when you’re in the “Harbor of Hospitality.”

Summer romances are made over picnic baskets and classic films, aired Tuesday nights in the park during the summer film festival, and the Wharf also hosts concerts from local, regional, and nationally renowned performers during its summer months. From May to October, Saturday mornings are reserved for shopping local at the Downtown Waterfront Market. But if you’re just looking to relax, the bench beside the Rose Buddies memorial is the ideal spot to watch what locals affectionately refer to as “sweet tea” or “root beer” water — more brown than blue due to the juniper and tannic acid of the water — lap against the docks. 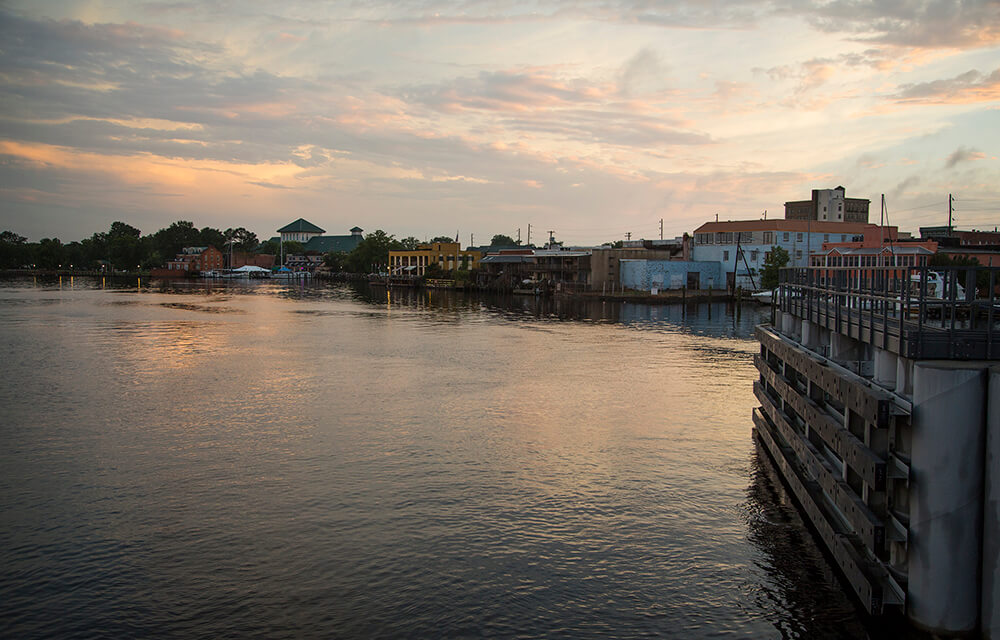 Grab lunch at a hidden gem

It may be small, but the American flag hanging over the door of Bryon’s Hot Dog Stand proves to be a steady beacon. Once you’ve found the building, march inside matter-of-factly and proudly proclaim that you must have a Hick Dog, Bryon’s signature hot dog served with mustard, onion, hot sauce, and homemade chili. Here, the word “hick” has been reclaimed playfully. “Our last name is Hickman, and [it’s] kind of country,” co-owner Stacey Hickman explains. Many of the dogs are named after people and places close to the Hickmans’ hearts, like the Pasquotank: a hot dog topped with barbecue, coleslaw, and hot sauce that might very well change everything you thought you knew about hot dogs. At Bryon’s, meals can be paid for with a couple of singles, a deliberate decision by the owners to keep prices low. This makes sure you have enough money to add one Pink Praise to the order, a beverage made with homemade orange, lemon, and lime juice with a shot a cherry flavor. If you arrive in town after Friday afternoon, you’ll have to wait until Monday morning to get your hands on a hot dog.

But don’t fret; two rights around the corner takes you across the street from Flour Girls Café and Bakery, home to the waffle sandwich. First-time visitors might be confused at first — the weathered awning reads “City Wine Sellar” — but any resident can tell you that not only is the facade an homage to the building’s previous beloved tenant, it’s also a great disguise for this not-so-hole-in-the-wall neighborhood spot. Here you’ll find plenty of baked goods, sandwiches, and wraps on the lunch menu, but it’s the three waffle sandwiches that steal the show. Try the Monte Cristo, which balances sweet and savory precisely in every bite. 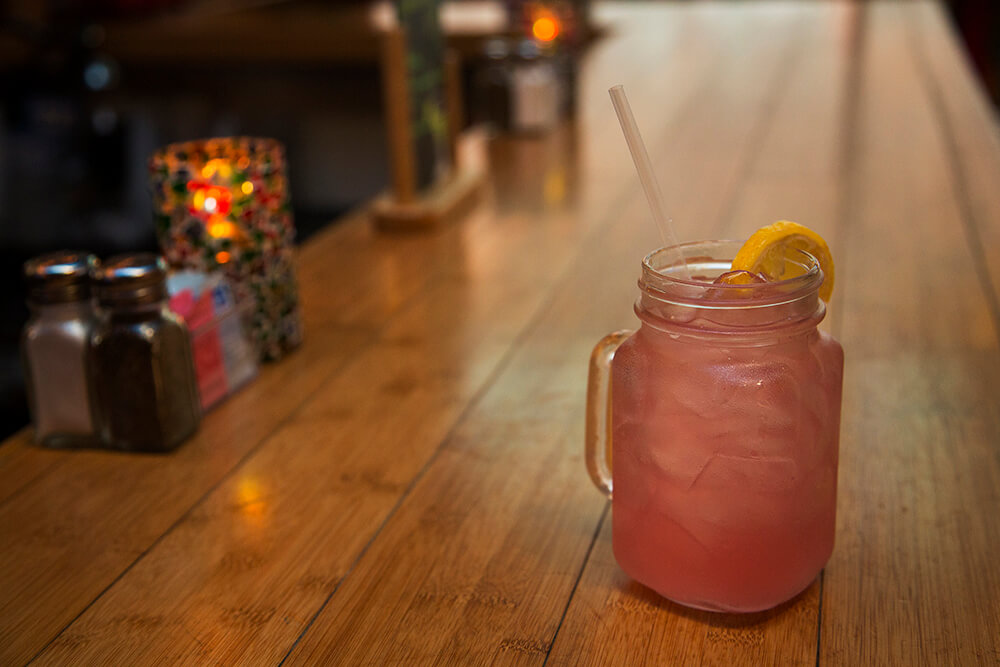 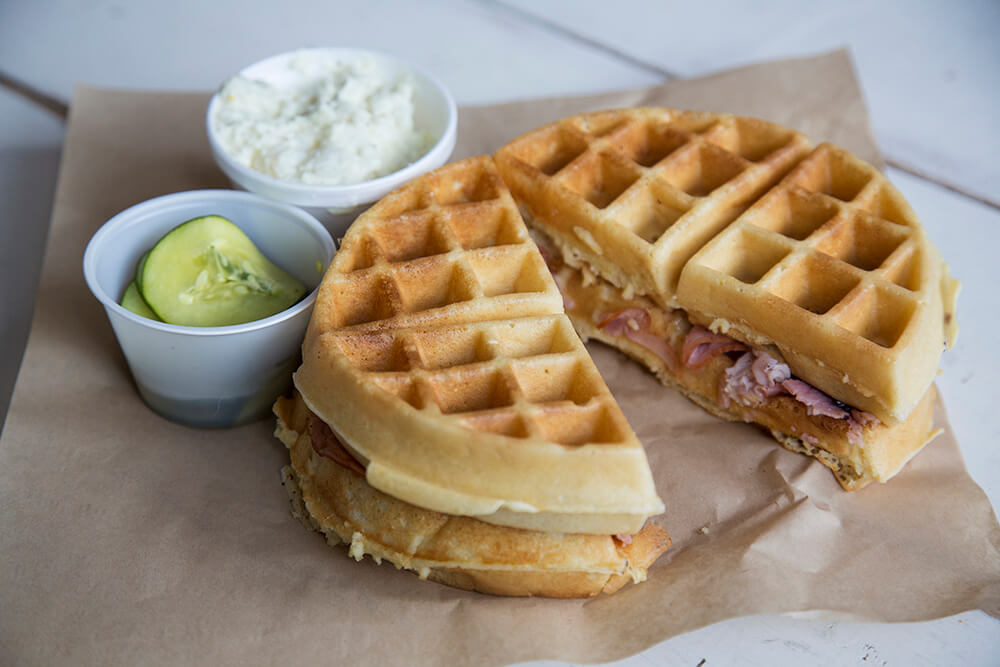 Explore the history of the town

Elizabeth City was one of the 10 largest cities in the state at the start of the 20th century. With almost 20 industries driving its economy in 1915, wealthy business owners began to set up shop and invest money into its commercial and residential buildings. Unfortunately, the city’s success did not always have positive implications for those buildings; since Elizabeth City never ran out of money, many of the historical buildings were altered and remodeled over the years. “Back in the day, they didn’t keep history as much as they do now,” Elizabeth City Historic Neighborhood Association (ECHNA) member Jean Baker says. But with the founding of the ECHNA, that’s starting to change, as preservation has become a critical component of their motto. “It’s only been in the last 25 years that people have become interested in the history,” local historian Edward Fearing says.

Visitors can begin to explore more than 100 historic buildings, homes, and land plots located in the Main Street Commercial District and Residential District by using ECHNA’s self-guided walking tours, which can be downloaded from their website or picked up for free at the Museum of the Albemarle building. Be sure to note the Judge Isaac M. Meekins House (number eight on the residential district walking tour) and the Charles O. Robinson House (number 28 on the commercial district), which Fearing says are two of the more popular homes on the tour. If you pick up paper walking guides, take a few minutes — or a few hours — to look around the Museum of the Albemarle while you’re there. Regardless of whether you’re familiar with the museum or not, exhibits are always changing and 2017’s 50th anniversary exhibit is a special collection that shouldn’t be missed. 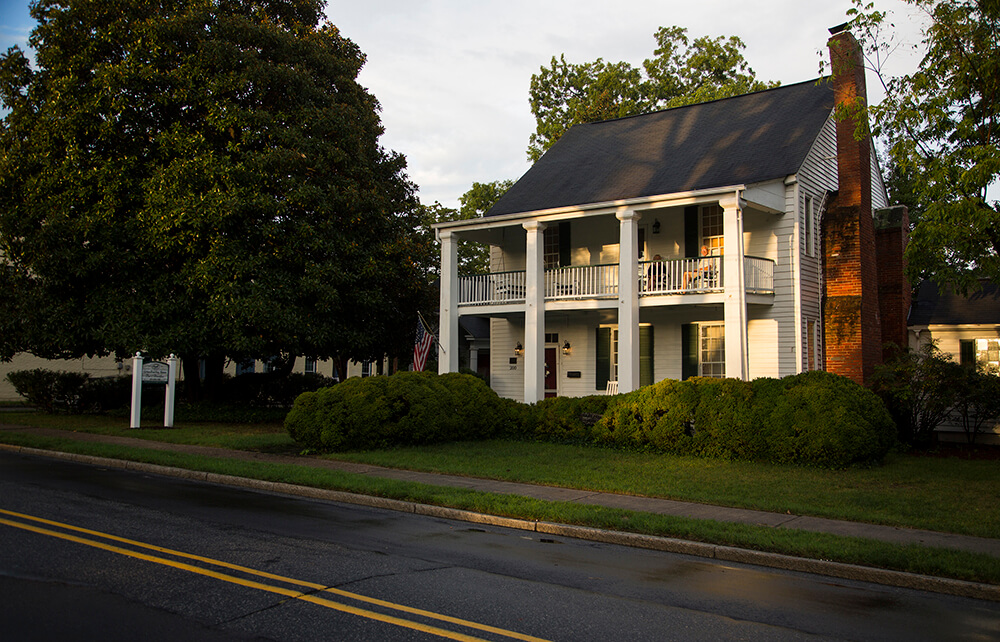 Take in — and take home — the arts

If it feels like every building in downtown Elizabeth City has a historical background, you’d be onto something; many of the properties, even down to the parking areas, have stood there for over a hundred years. The Lowry-Chesson Building (number 19 on the commercial district tour) is no different; it was a hive for entertainment, arts, and culture at the turn of the 20th century during its era as the “Academy of Music” opera house.

It fills a similar role today, housing Arts of the Albemarle, a regional non-profit arts council representing Pasquotank, Gates, and Camden Counties. Adults can enjoy “Wine and Paint” or “Brushes and Brews” painting classes organized by the Arts of the Albemarle School of the Arts, while children are encouraged to let their creativity shine in performance and visual arts classes and summer camps. On the second floor of the building, the Maguire Theater hosts a number of North Carolina artist performances, as one of the few vaudeville theaters left in the state. The first floor lobby galleries are home to artwork from more than 220 established, new, and new-to-the-gallery local and regional artists. If there’s a specific type of art a person comes in looking for, they’re in luck — “We like all kinds,” marketing and volunteer manager Caroline Gordon says. That means pottery, acrylic paintings, photography, jewelry and more all sit side by side in one space. The best part? It’s all for sale. 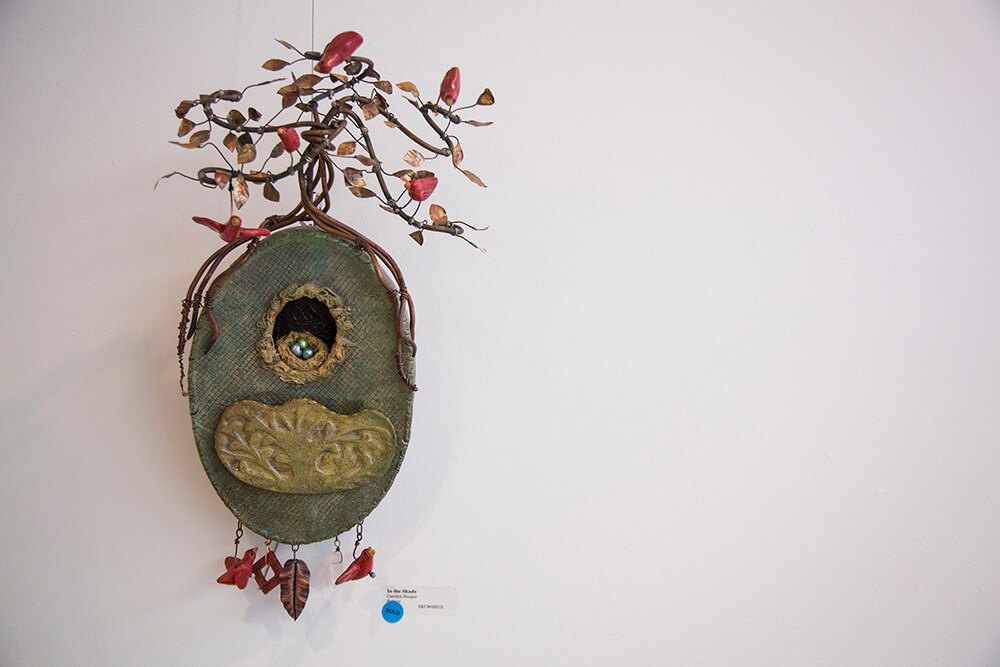 There are several heavyweights in the Elizabeth City restaurant circuit — Montero’s, C&H Oyster Bar, Cypress Creek Grill — but you’ll find a new one housed in a late 1800s building. Hoppin’ Johnz opened to fill a culinary void in Elizabeth City that owner James Nye saw the need for, and the restaurant has been a success in less than one year of business.

“The tag line of Hoppin’ Johnz is ‘New South Cuisine’,” Nye says. “We serve Southern food on steroids.” Here the dishes are familiar, ones that have been passed around Sunday supper tables for generations. You’ll see fried green tomatoes, chicken salad, and pork chops on the menu, but with a modern twist from a classically-trained chef. You’ll also find the restaurant’s namesake (Hoppin’ John, or Carolina Peas and Rice) on the menu, but you don’t have to wait until New Years Day to get a bowl full. The shrimp and grits — succulent, seasoned shrimp atop a bed of black eyed peas, peppers, tomatoes, onions, mushrooms and grits — are the most popular comfort food on the menu. Surprisingly, neither the shrimp and grits nor the Hoppin’ John are Nye’s favorites this season; his top pick is the filet minion.

Still, the signature Hoppin’ John is a good place to start, a rich broth-filled bowl of rice, black-eyed peas, and pig cheeks. Tie the meal together with a classic cocktail — a martini, Manhattan, or Old Fashioned never goes out of style. 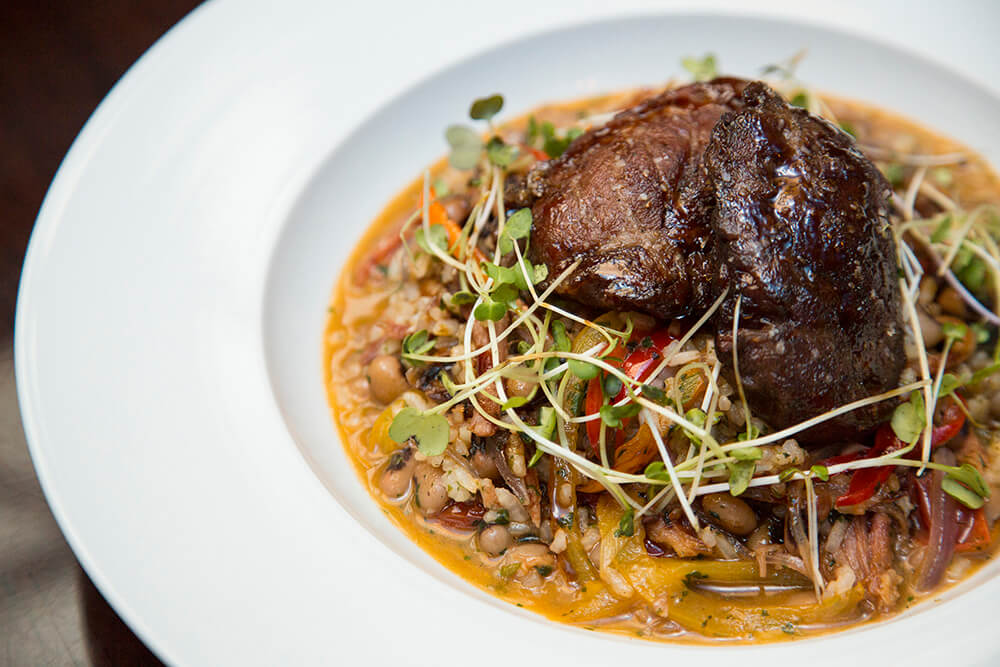