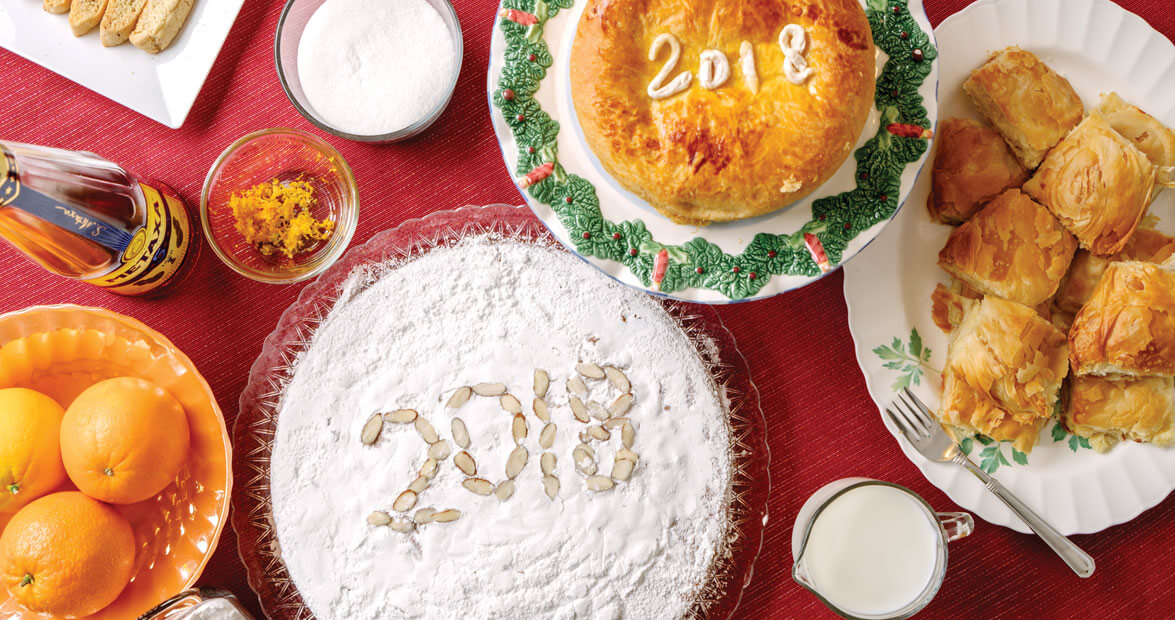 For three years, I kept a crusty, aluminum foil-wrapped quarter in my wallet. I often forgot it was there, wedged between crumpled receipts and credit cards. But it was my lucky coin, a talisman I carried to remind me of my Greek roots. I had plucked it from a Greek cake called vasilopita that’s made to celebrate and honor the hope that comes with each new year. The idea is similar to a king cake, but instead of a tiny plastic baby buried inside, the surprise is a foil-wrapped coin. A quarter, usually. A half-dollar, if you’re extra lucky.

Dusted in powdered sugar and decorated with the new year shaped in gleaming white Jordan almonds or sesame seeds, vasilopita appears on Greek kitchen tables on New Year’s Day. Recipes vary by region, but my family’s version, which is common in Greek-American communities, has a coffee-cake texture with hints of orange and lemon zest. Tempting as it may be to dig in right away, everyone must wait for the family to gather first. The ritual in how we cut our vasilopita is rooted in the idea of earning extra blessings in the Greek Orthodox tradition. In my family, we start with the Holy Trinity: Father, Son, Holy Spirit. Each figure gets a slice, in that order. As a kid, I always hoped the coin would not be stuck in one of the holy slices — it would be too unfair! Not that I ever admitted as much out loud.

Instead, I waited and waited as the cutting continued from the eldest in the family, including whoever might be present at the table, to the youngest. I knew how easy it would be to cheat at this game. A foil-wrapped coin dropped into batter sinks to the depths of a springform pan. Whoever releases the cake from its metal harness to cool on a rack (always my mother) will likely see the foil settled on the bottom. But I grew up with enough superstition that I never looked. I didn’t want to jinx it. And all these years later, the tradition remains the only lesson in patience that stuck with me from childhood.

When it was finally my turn for a slice, I remember wishing, hoping for the knife to clack onto the coin. The coin in your slice meant a whole year’s worth of good luck, a gift worth far more than the coin itself. As the daughter of Greek immigrants who blessed me with the name Victoria Vasiliki Bouloubasis — quite a mouthful in my hometown of Clemmons — I was always happy to have a little extra luck. 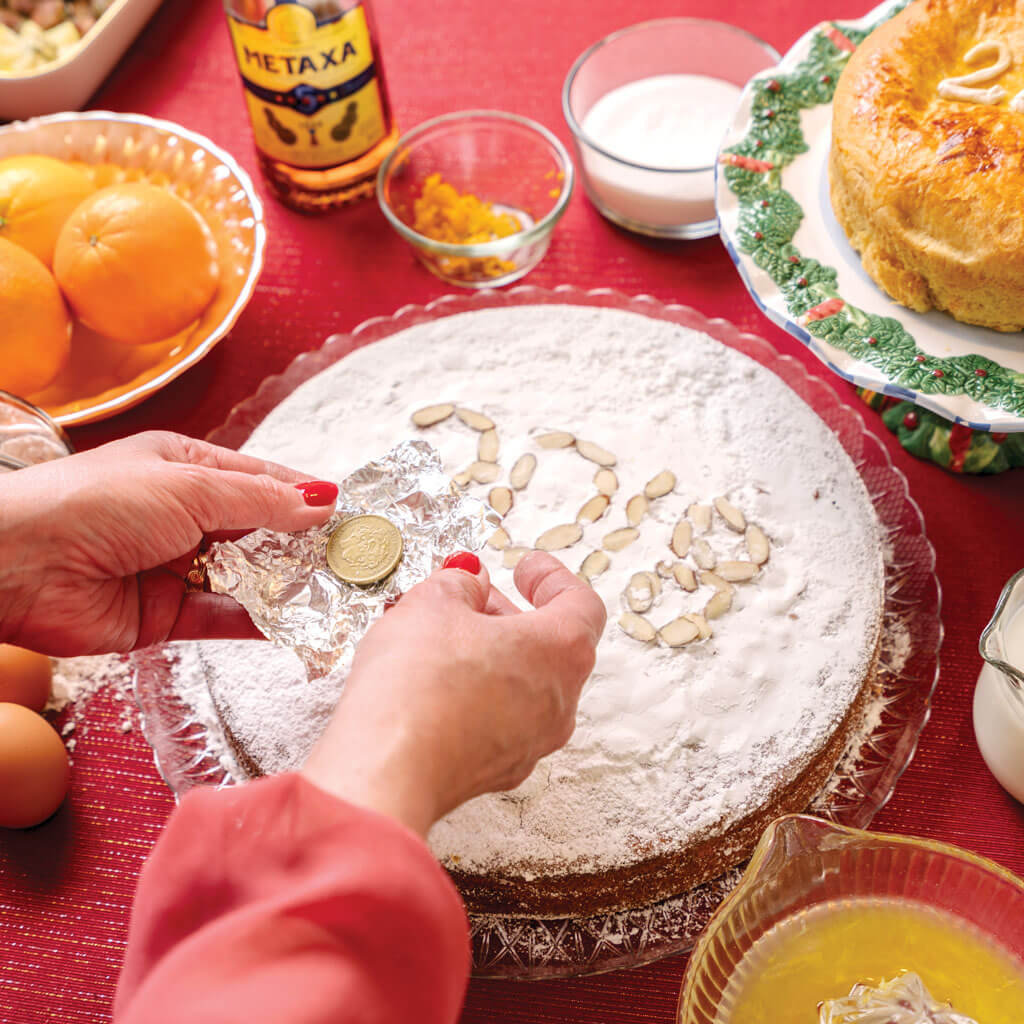 Lisa Bouloubasis, the writer’s mother, wraps up a coin she will bake into a vasilopita at her home in Clemmons. photograph by Adam Mowery

For many first- or second-generation immigrants in the United States, our cultural traditions are mirrors. But like old mirrors passed down through generations, they offer reflections through smudged glass and rusted edges. Modern interpretations get a little distorted. We see what we’d like to see, and it’s not always clear.

Take vasilopita: The cake is named after Saint Basil — our version of Santa — a legendary character traditionally bearing gifts on New Year’s Day, though often Westernized as Christmas Day. To me, he always seemed more like a Greek Robin Hood, or even a socialist saint, because I was taught that he took from the rich and gave to the poor by slyly baking coins and treasures into cakes. My cousin Anna Prokos, who lives in Waxhaw, wrote a children’s book called The Lucky Cake after realizing that her own four Greek children didn’t really know what they’d been celebrating all these years. Anna called her grandmother to get answers to her questions about Saint Basil, but the quest proved futile. “After I hung up with her,” Anna told me later, “it sank in that Greek Orthodox all over the world have this tradition, and no one knows why!”

My attachment to vasilopita is more personal than any legend. January 1 is my “name day,” which, in Greek tradition, is a kind of second birthday. I’m named after my paternal grandmother. When I was born an ocean away in the U.S., she requested that my parents name me Vasiliki, roughly translated as “royal.” Vasilikis are also called Vicky in Greece, which turned out to be particularly important when we moved from our ethnically diverse New Jersey neighborhood to Clemmons, a town classified as a “village” in official documents. My first day of third grade in North Carolina began with the teacher taking attendance: “Victoria … Va? See leeeeeee. Kee?” I wanted to hide. My fellow students at Southwest Elementary School fondly christened me “Vaseline Bubblicious.”

I didn’t realize then that nearby Winston-Salem has a long history of Greek kids growing up similarly embarrassed. Even before there was a permanent Greek Orthodox church in town, there was a Greek school so that immigrant children wouldn’t lose the literacy of their native tongue or their cultural traditions. I grew up going to that Greek school and attending Annunciation Greek Orthodox Church, where we learned kalanda, New Year’s Day caroling. Chaperones drove us to different homes in the Greek community, where we’d often be welcomed inside with vasilopita.

Rita M. Georgoulias and her sisters-in-law, Virginia G. Moutos and Betsy G. Vlahos, who are now in their 70s, are mainstays in our community. They grew up in the first Greek community in Winston-Salem. Sitting in my mother’s living room, they swap memories of teenage crushes from those early days.

“We all took turns having a crush on Pete,” Rita says.

“He was cute,” chimes in Virginia.

Rita, Virginia, and Betsy (who is also a Vasiliki) navigated a first-generation upbringing together, trying to fit into “American” ways, all the while being pulled by their roots (and their parents) to stay Greek. Rita arrived at 7 years old. She started the first grade in Winston-Salem and remained, she says, a “spunky, talkative” kid through high school. “We were American from 8:30 until 3 o’clock,” she says. “After that, we were Greek.”

It’s been almost 70 years since Hercules Amprazis, my papou (grandfather) boarded a ship off the coast of Athens for a new life in America. He was escaping a gruesome civil war that took a heavy toll on his village. His father presumably died in battle in the mountains of Evrytania, where they lived. The messenger who came to my great-grandmother’s house to deliver the news of her husband’s death found her already weeping at the doorstep, covered head to toe in black mourning clothes. She had just buried her youngest son, who stepped on a land mine while tending to the family’s cows, a few yards from home.

A year or two later, in 1948, my papou emigrated. Hercules (he’s called Harry here) has owned restaurants for most of his life. I don’t think he ever had an inclination to cook, or a desire to be a chef. But he did have the drive to earn money for his mother and two siblings back in Greece, and to eventually bring over a brother and, later, the teenage daughters of his late sister. Papou began his new life at 19 in Greensboro, washing dishes before running a few restaurants, learning English, and supposedly dating a Miss Elon College.

In New Jersey, he met and married Helen, my grandmother from the Greek islands. My father, Kostantinos “Gus” Bouloubasis, arrived in New York from Greece in the 1970s, and my parents were married in 1980. (My mother, Lisa, Papou Hercules’s daughter, is a first-generation Greek-American.) In 1990, our family moved south so that my father could run a restaurant in Stony Point, a small town outside of Statesville. My younger sister and I poke fun at Baba by calling him Bubba, because we’re all Southern now. 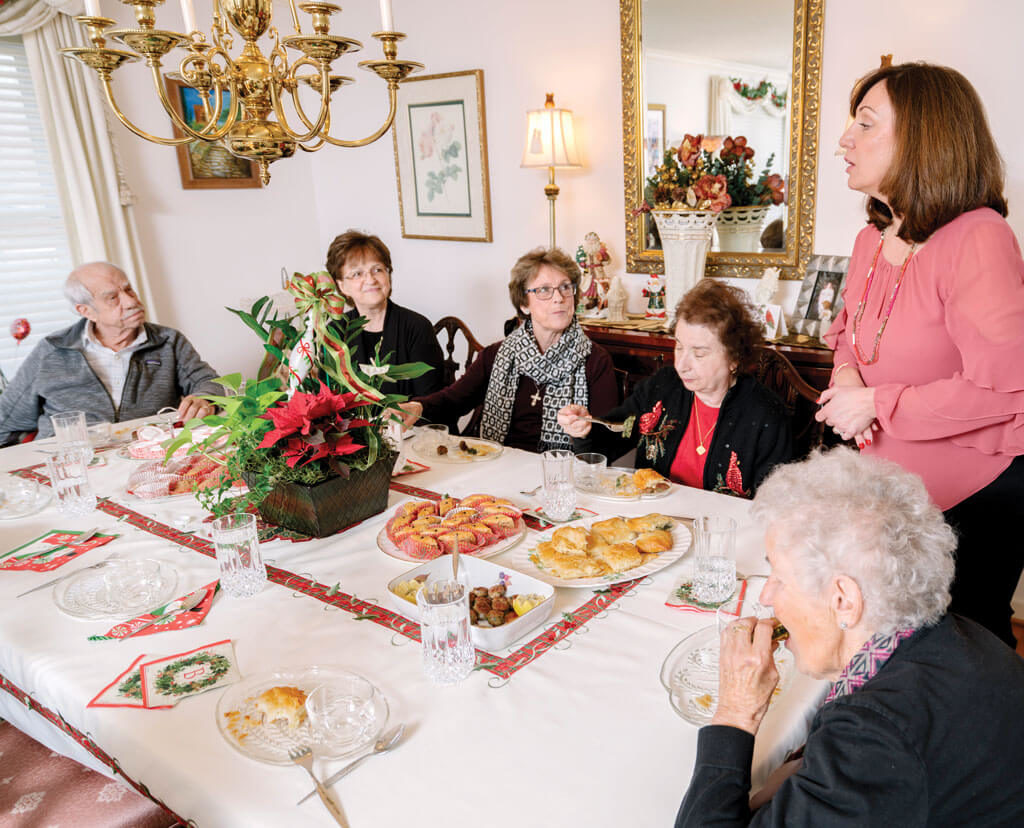 I’ve watched my Baba sing old Greek love ballads and swig moonshine with men and women he’s known since the womb, nearly, since the war, since before their village had running water. At 70 and semiretired from his restaurant, he still makes the best hush puppies I’ve ever tasted. And our traditional recipes, like vasilopita, are just as important as ever. Baba has let his Greek roots sink into the honeyed North Carolina landscape, where his fish camp restaurant has sustained us for 30 years. A younger version of me could never have imagined all the folks who would be comforted by a pile of popcorn shrimp delivered by my father and his mustachioed smile. Now, I can’t imagine anything more indicative of Southern hospitality.

I see the same spirit throughout the Greek community in Winston-Salem and beyond. Over the holidays, we open our homes to families and friends, and we gather in kitchens that smell of vasilopita. I haven’t gotten a coin in my slice in years, but I still keep one quarter in my wallet. Like many Greek traditions, there’s religion and there’s lore, and most families blend the two. We bring what we want to keep into the next generation, just as we learn that we can carry our own luck wherever we go.