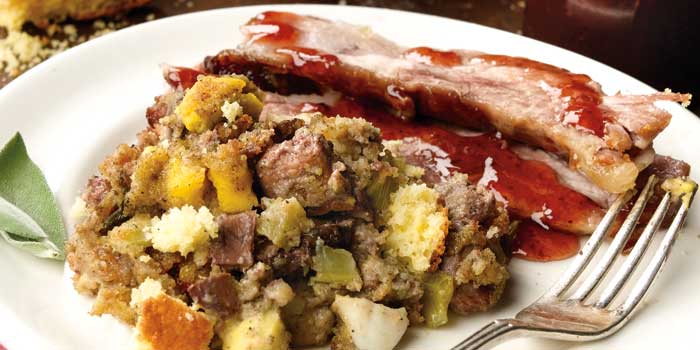 How to eat like a Lumbee: For lunch or dinner or anytime, start with something greasy and some cornbread — or some greasy cornbread — and see where it goes from there. Cornbread is versatile and adaptable, but it is, was, and always will be cornbread.

If it’s fried up and used on the top and bottom of collards and fatback, it’s the framework for a collard sandwich that’s as Lumbee as any Lumbee meal can be. And it’s still cornbread.

And even if it’s just on the side to accompany fresh ham and fried turnips, or to chase down the gamy taste of squirrel or raccoon or dove or frog legs, it’s still cornbread.

It’s been on the standard Lumbee menu forever, as long as Lumbees have been Lumbees. Archaeological excavations have revealed signs of life along the Lumber River dating back to the end of the most recent ice age. The first written accounts of the Lumbee tribe date to 1754, but there’s no telling how long their ancestors — the Cheraw — have been here. And no telling how long they’ve eaten this way.

Gloria Gates was born a Lumbee, grew up a Lumbee, and even though she moved away to the town of Graham, she remains proudly Lumbee today at 66 years old. She visits her family in Robeson County regularly, and on those trips, she began to realize the distinct food. And she realized that while some recipes have made their way into church cookbooks, nobody had ever put together a Lumbee cookbook.

It’s true that we remember past people in buckets, as one culture or another, one gender or another, one race or another. The Lumbee tribe, in particular, has gone to great lengths in recent years to gain full federal recognition as an American Indian tribe.

Food is key to any of those buckets; how we eat is a glimpse into our cultural core. Gates wants Lumbee cuisine remembered throughout history. So she published The Scuffletown Cookbook, Lumbee Indian Recipes of Yesteryear: A Taste of Lumbee History and Dialect.

The recipes show the taste of a region and a culture. Some of the names are tributes to Lumbee heroes of the past, such as the members of Henry Berry Lowrie’s crew. During the Civil War, Lowrie assembled a gang of Indian and black men who fought racial injustices by robbing plantations and distributing their loot to poor people in southeastern North Carolina. Lowrie is the Robin Hood of Robeson County, and the members of his gang appear throughout the cookbook. The collard sandwich, for instance, is named Boss Strong’s Collard Sandwich after Lowrie’s cousin.

The name of the book, though, refers to Scuffletown, the original name of the town of Pembroke during the 18th century, before the railroad came through. In Lowrie’s years, Scuffletown was as much an attitude as it was a name.

“They used to say that if you’re coming through and you’re not an Indian, you better scuffle on through the swamps,” Gates says.

Gates recognizes that almost all of the recipes are greasy, and only a few are good for you. So she’s beginning to work on plans for another cookbook, one with healthier foods.

But even then, she says, she’ll make sure that each recipe is, was, and always will be Lumbee. 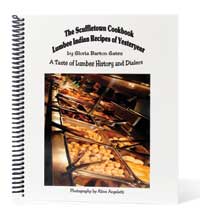 The Scuffletown Cookbook can be purchased at the University of North Carolina at Pembroke bookstore, Cyna’s Jewelry in Pembroke, or by contacting Gloria Gates at
globird2@bellsouth.net or (336) 578-1188.

Michael Graff is the senior editor of Our State magazine.