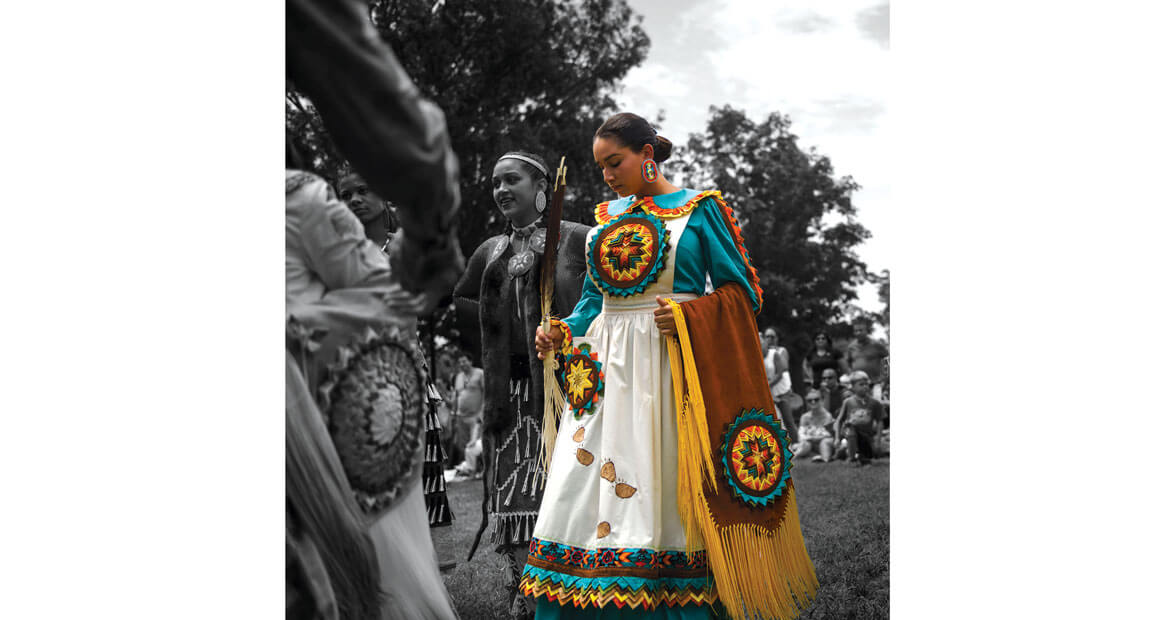 Through the early decades of the 20th century, the Lumbee Indians were not much known outside of Robeson County in the southeastern part of the state — though their forebears settled there by at least 1754, when an agent for colonial Gov. Arthur Dobbs discovered some 50 families living at the headwaters of the Little Pee Dee. His description was less than flattering: “a lawless People [who] possess the Lands without patent or paying quit rents.” Thus began a long history with white settlers during which the Lumbee struggled to gain respect.

Their lineage is a matter of contention, including perhaps the Hatteras — or Hattorask — Indians, the Tuscarora, the Saponi, the Cheraw, and the Cape Fear Indians. Whites and free blacks intermarried with them. Some believe they are descended from the settlers of Sir Walter Raleigh’s Lost Colony of Roanoke Island — a fanciful addition to the myth of the disappeared colonists. In many ways, the Lumbee are unlike most other American Indian tribes. They are one of the few tribes never to have been confined to a reservation. Their native language — Algonkian, Siouan, or Iroquoian — has long since disappeared from living memory. And their appearance — skin tone and hair color — varies widely and includes many fair-haired, light-skinned Lumbees. They mainly adhere to the Southern Baptist or Methodist faith.

In many ways, the Lumbee are unlike most other American Indian tribes.

Even their name is hard to fix. In 1885, the North Carolina Legislature recognized the tribe and named them Croatan Indians. In 1910, a bill introduced in the U.S. House of Representatives tried — unsuccessfully — to rename them the Cherokee. The following year, the state legislature designated them Indians of Robeson County. In 1913, the legislature changed their name yet again to the Cherokee Indians of Robeson County, but the U.S. Senate failed to pass a bill recognizing the name. The House tried again, without success, to enroll them as Cheraw or Cherokee. The Senate pursued the idea of renaming them Siouan Indians — again, to no avail. At last, in 1953, the North Carolina Legislature officially grants them the name chosen by tribal ballot: the Lumbee Indians of North Carolina, after the Lumber River, which runs through their home county. Three years later, the federal Lumbee Act adopts the name — but denies government benefits to the tribe.

The Lumbee have long been treated as second-class citizens — and have fought for their rights just as long. In 1835, the state constitution took away their right to vote or own firearms. During the Civil War, Lumbees were conscripted into hard labor to build Confederate works along the Cape Fear, including massive Fort Fisher. Lumbee farmer Allen Lowry and his family were accused of leading a resistance movement, stealing guns, aiding escaped Union prisoners and Confederate deserters, and hiding in swamps to avoid conscription. When the Home Guard executed Lowry and his eldest son, William, in 1865, a younger son, Henry Berry Lowry, continued the fight, still an outlaw long after war’s end. The Lowry band successfully eluded an armed force sent to capture them in 1870. When the legislature offered a bounty on Henry Berry’s head, another militia force tracked the band and captured several members, but Henry Berry himself again proved impossible to catch. He and his band led a final raid on Lumberton in 1872, then Henry Berry Lowry disappeared into legend.

As late as the 1950s, the 30,000 Lumbee in Robeson County endure a three-way segregation and bigotry. The movie house in Lumberton seats white patrons downstairs. Upstairs, black and Lumbee patrons are required to sit in separate sections, fenced off by a barrier of chicken wire. Their children attend separate schools. Verdia Locklear later recalls those days in an interview: “You don’t know what it’s like to go into a drugstore — now, I’m telling you my experience — go into the drugstore, you’re sick, and you ask for a fountain Coke … And I got the fountain Coke and … they wouldn’t let me sit down. And I passed out.”

In 1958, the Lumbee are about to become nationally famous — not for their culture or heritage or fight for tribal recognition — but for another kind of battle, a principled stand against a familiar foe: the Ku Klux Klan. Locklear is 24 years old, a wife and expectant mother, when she reads in The Robesonian that the Klan intends to stage a rally near Maxton on January 18.

The organizer is the Grand Dragon of the KKK, James W. “Catfish” Cole, whose stated purpose is to “put the Indians in their place, to end race-mixing.” His followers have burned crosses in the yards of a Lumbee family that moved into a white neighborhood and a Native American woman who is said to be dating a white man.

But Cole and his fellow Klansmen haven’t reckoned on the determination of the Lumbee, who organize immediately to disrupt the rally. “The first thing they’d say … be sure you got your pistol, and if you don’t have a pistol, carry your rifle,” Locklear says. Accompanied by her husband, Wiley, she carries her pistol to the field near Hayes Pond, where a stage has been erected, lit by a single generator-powered bulb. In the darkness fronting the stage, and in the perimeter surrounding it, some 350 armed members of the Lumbee Tribe hunker down, awaiting their cue.

Cole takes the stage. “When he started talking on the microphone, they started shooting then,” Locklear recounts. One of the first shots smashes the light bulb. “It was dark. It was dark,” she says. “Wiley didn’t get … too far from me, ’cause all of us was shooting. They didn’t let [Cole] talk, period. He got gone.”

The Lumbees rush the stage and swarm over the Klansmen, two of whom are wounded by buckshot. “They were shocked, ’cause they had no dreams that we would be there like we were,” Locklear says. The Lumbees seize the crosses that the Klansmen were intending to burn and make a bonfire of their own near the railroad. The Lumbees’ stand turns into a jubilant celebration that lasts until 4 in the morning.

The Lumbee contingent includes Charlie Warriax and Simeon Oxendine, a veteran who flew more than 20 bombing missions over Germany as a waist gunner in a B-17 — known as a man who is fearless. He and Warriax tear down the Klan’s white banner — emblazoned with “KKK” — and clown around for a photographer, wrapping themselves in it, grinning and winking for the camera. The picture is featured in LIFE magazine, along with a story about what is already being called “The Battle of Hayes Pond”: “Bad Medicine for the Klan — North Carolina Indians break up Ku Kluxers’ anti-Indian meeting.”

Cole and his Klan associate, James Martin, are arrested for inciting a riot. Martin is tried in the Maxton Recorder’s Court, where the presiding judge is Lacy Maynor, a Lumbee. Maynor scolds Martin before passing sentence: “You came into a community with guns, where there was a very happy and contented group of people. We don’t go along with violence … We can’t understand why you want to come here and bring discord.” Martin gets six months to a year in prison. Cole faces trial in Robeson County Superior Court, earning a sentence of 18 months to two years.

Malvina Reynolds, a folk singer and political activist, memorializes the event in a satirical ballad, “The Battle of Maxton Field.” In one of the nine verses, she sings:

Our histories will long record
That perilous advance,
When many a Klansman left the field
With buckshot in his pants. 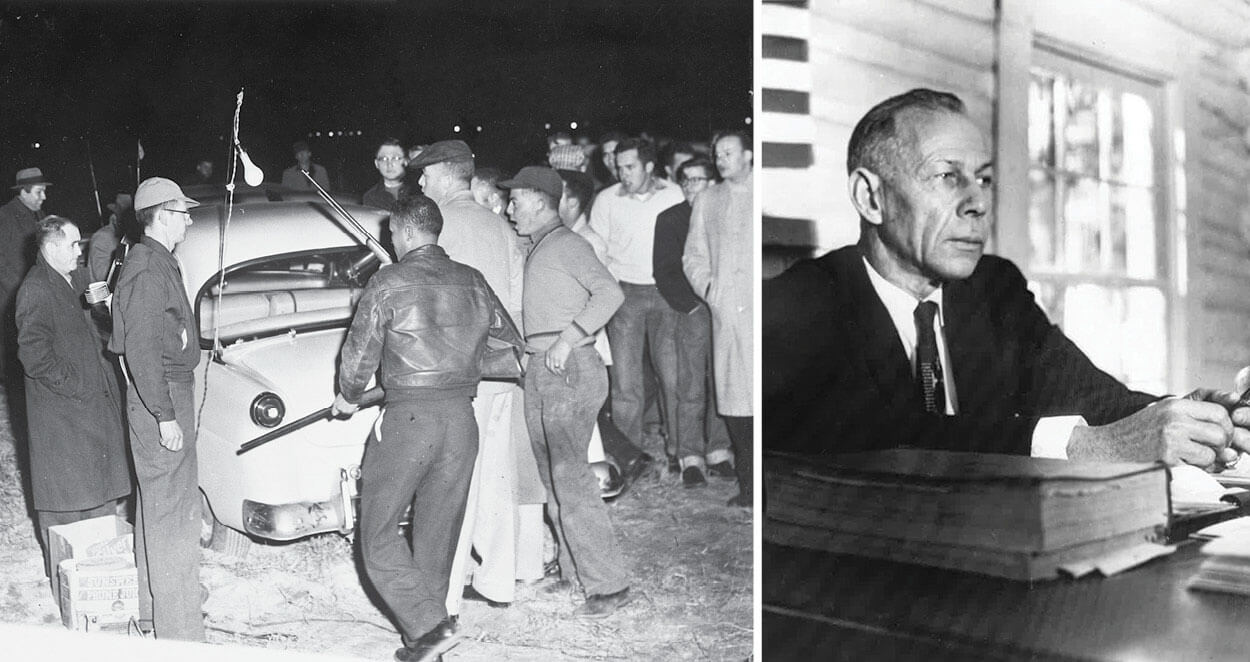 After the Battle of Hayes Pond (left), Judge Lacy Maynor (right), a Lumbee, presided over the hearing for Klansman James Martin. photograph by The State Archives of North Carolina; Above right: courtesy of the museum of the southeast american indian

The Lumbee have routed the Klan and made it an object of ridicule. But the true measure of Lumbee progress is the tribe’s increasing political power. Some four months after they send the Klan packing, Tracy Sampson is elected as Robeson County’s first Lumbee county commissioner. Soon, other Lumbees assume important leadership roles beyond the tribe, on the board of education and as president of Pembroke State College.

In 1962, a delegation of 32 Native Americans presents to President John F. Kennedy The Declaration of Indian Purpose. One of those standing with the president at the White House is a young staff member for the U.S. Senate Subcommittee on Constitutional Rights under Sen. Sam Ervin: Dr. Helen Maynor Scheirbeck of Lumberton, daughter of Judge Lacy Maynor.

Inspired by her father’s example of activism in pursuit of justice, Scheirbeck goes on to become perhaps the best-known advocate in the nation for the rights of Native Americans to control their own education, working on reservations around the country and later as director of the Office of Indian Education in Washington. She becomes a fierce advocate for education as a means of improving the lives of Native peoples. She helps ensure the passage of the Indian Self-Determination and Education Assistance Act of 1975 and champions the Tribally Controlled Community College Assistance Act of 1978. She carries the fight for the rights of the Lumbee — and all Native tribes — far beyond Robeson County and into the halls of Congress.