It started innocently enough: Nicholas “Nic” Nichols wanted to make an iron gate. The Brunswick County native had long been interested in architectural salvage, and he was intrigued by the notion of hammering out his own version of historic gates. “But I soon realized that I didn’t have any blacksmithing tools — or know the first thing about blacksmithing,” he says with a laugh. “That led me to collecting old tools, and then to selling blacksmithing tools as a side hobby.” 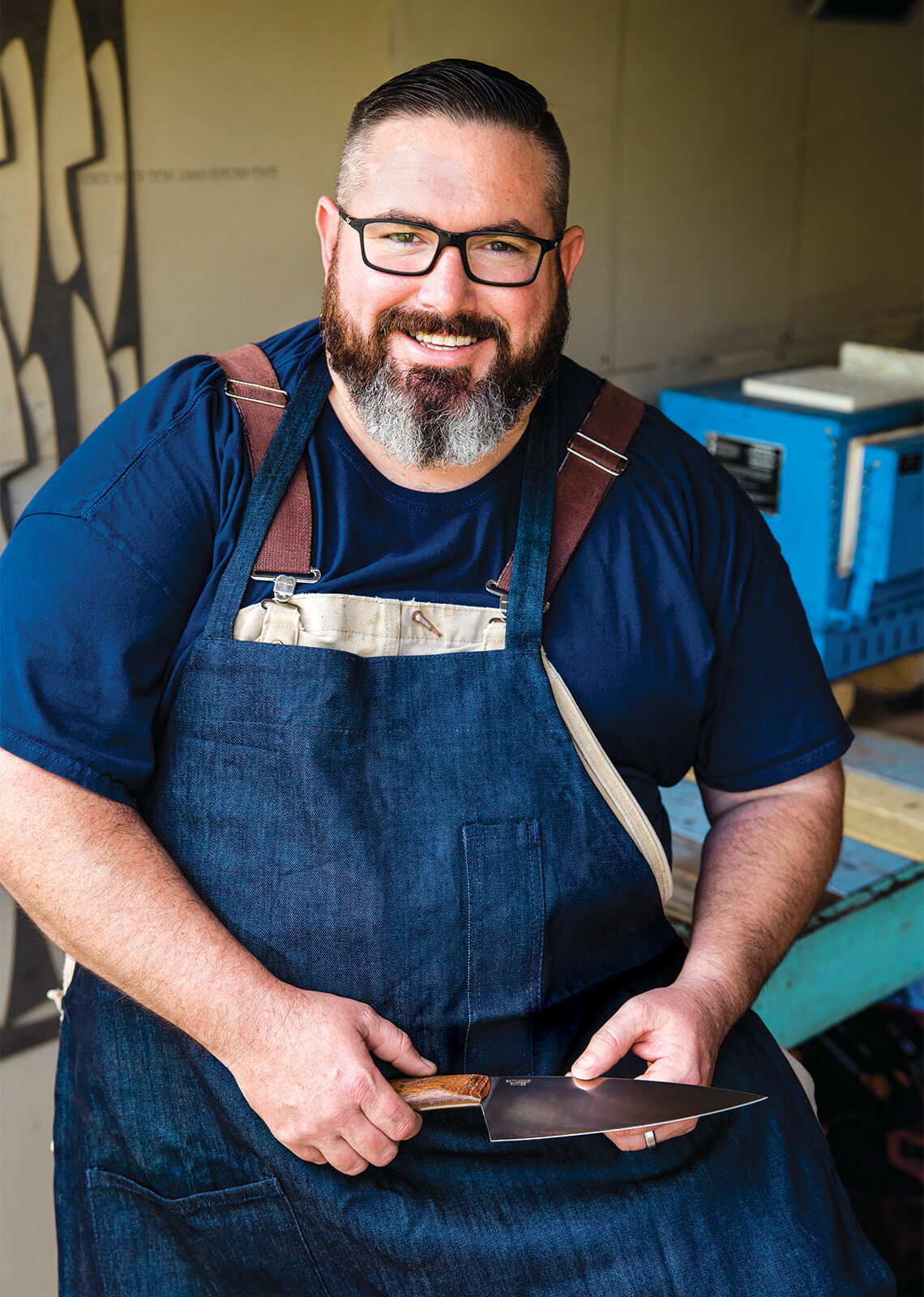 As a former chef, Nichols knows that reliable kitchen tools are just as important as quality ingredients. His Battleship knives are thoughtfully constructed and infused with history. photograph by Matt Ray Photography

And just like the storyline of the beloved children’s book If You Give a Mouse a Cookie, one heavy-metal thing led to another. At his grandmother’s funeral in Columbus County in 2010, Nichols learned that his great-great-grandfather had been a blacksmith. “And that was it,” he says with a firm nod. “That’s when I knew I had to chase this. It seemed like destiny.”

That destiny has led Nichols to astonishing success as a knife maker. Today, in a garage on an unassuming residential street in Leland, Nichols crafts fine culinary and outdoor knives that have garnered the attention of collectors, landed him on an episode of the History channel’s television series Forged in Fire, and earned a top spot in Our State’s 2020 Made in NC Awards.

In his garage shop, the 37-year-old Nichols moves around drills and saws and stacks of sheet metal with a lightness that hints at the untold hours he spends there. He is big and bearded. You might imagine Vulcan at his soot-smudged forge under Mount Etna — except that the other half of the garage is stacked chockablock with bright orange children’s bicycles, pink children’s fishing rods, a rocking horse, scooters, and lawn equipment. Nichols’s knife-making fits seamlessly into his other roles as father, husband, and salesman for a large wholesale foods purveyor. Here, he is a few steps from helping with homework, grabbing groceries out of the car, and grinding stainless steel from knife blanks in a bladesmithing technique known as “stock removal.”

There is a certain alchemy required of a knife maker, whose goal is to craft life experience, artistic expression, and technical expertise into a three-dimensional object that can actually slice a tomato. Nichols’s favorite chef ’s knives reflect his own long hours in the kitchen — he is a 2006 graduate of Charlotte’s flagship culinary school, Johnson & Wales University, and he spent a number of years as a chef in Charlotte and Atlanta restaurants. He prefers taller blades, which protect a chef ’s hands from banging against a chopping block during long hours of prep work. Most of his knives are cut from sheets of Nitro-V steel, a derivative of 440C stainless steel with added vanadium for strength. With the rough outline in hand, he grinds away from a piece of metal all that is not the knife he imagines: He shapes the profile, tapers the tip, winnows away the steel into the distinctive, smooth, high flat grinds that produce hairsplitting sharpness.

“Somewhere around here is the ‘bucket of knives that never will be,’ ” he says — odds and ends of metal he cut on the way to becoming a knife maker. “People see the end product, and they don’t know about the blood, sweat, and tears it takes to get to the point of being able to make a knife.” 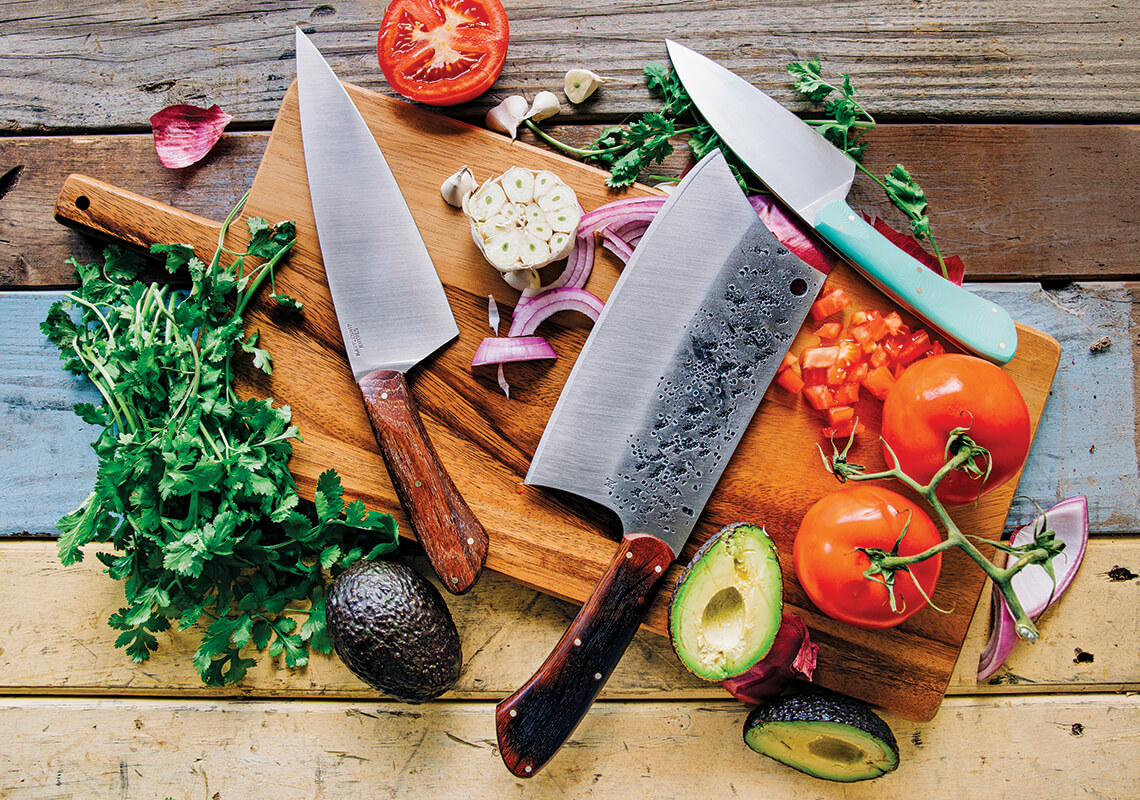 Nicholas Nichols Knives work hard, and many of them tell a story, too: Nichols’s Made in NC Award-winning chef’s knife was created with decking from the beloved Battleship North Carolina. photograph by Matt Ray Photography

For his Made in NC Award-winning chef ’s knife, Nichols turned to a trove of treasured wood for a handle with deep North Carolina roots. The teak is from restoration work on the Battleship North Carolina, anchored in honor in Wilmington, just a few miles from his home. He holds up a piece of teak planking and marvels at his good fortune.

“Just look at that color,” he croons. “Look at that texture. New teak doesn’t have that. Synthetic material all looks the same. But with this wood, every piece is different, and every piece has its own soul. And the fact that they helped defend our freedom and came from the baddest boat of them all, well, that’s what gets me up in the morning.”

“When I put my initials on the blade, this knife becomes a piece of my immortality.”

Since he began crafting knives with such storied wood, Nichols has learned just how deep the ship’s roots are in North Carolina. “It seems like everybody’s got a connection to the Battleship,” he says. “I’ve sent knives to Texas and California. I just sold one to a bank executive whose dad served on the ship, and I was just as excited about making a knife as a tribute to her father as she was about receiving it.”

The battleship teak in Nichol’s shop is strong, long-lasting wood, but he sends it out for additional treatment of resin applied under high pressure. He shakes his head slowly. “It doesn’t have to be stabilized,” he explains, “but I want this knife to be around when I’m gone. When I put my initials on the blade, this knife becomes a piece of my immortality. I really feel that.”

Not all of his knife handles are made with historic woods from a World War II legend, but Nichols is drawn to materials whose heft comes from more than dense, hard grain. He’s procured old Woodford Reserve bourbon barrels and exhibition-grade woods from the Gibson guitar company. He has stocks of wood from some of the most famous stadiums around the country — Yankee Stadium, Fenway Park, Lambeau Field, Notre Dame Stadium, and Ohio Stadium among them.

And the story of his own love of meaningful materials ensures that others find their way to Nichols. He’s made knife handles from black walnut cut from customers’ farms, and from favorite pecan trees that tumbled over in yards. He recently finished a knife set with handles made from a family’s heritage mahogany kitchen hutch that was damaged in a flood.

“Part of this idea comes from my chef ’s training,” he says. “Chefs use their knives every single day, so they want the best they can find. But everyday cooks are going to use a good kitchen knife year after year, and maybe forever. So why not use something special, and something that has story and meaning?”