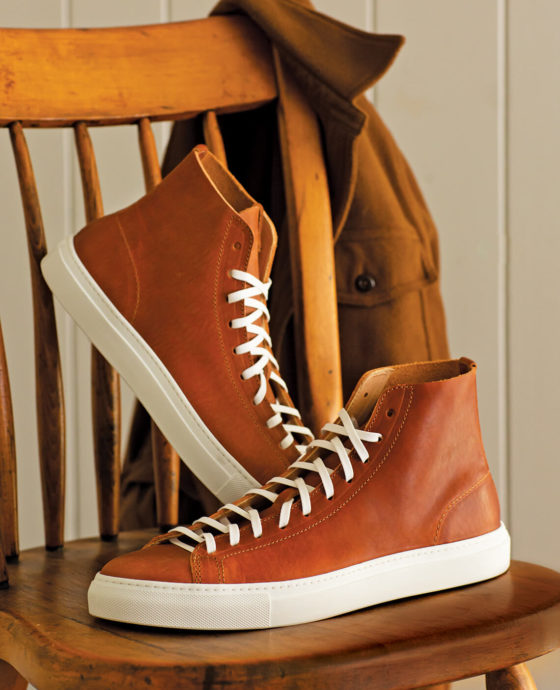 In a sprawling industrial park just south of Asheville is the modest shoe factory where Justin and Amanda James design and manufacture their Opie Way brand of stylish sneakers. The place smells of rich leather. Reams of canvas and luxuriously tanned hides are stacked against a back wall; pieces of footwear, in various stages of development, perch atop several tall tables; and completed pairs of shoes sit on shelves, prepped for shipment to customers across the country. An adjoining factory floor houses more than 15 heavy-duty machines used for shoemaking.

Justin rattles off nearly a dozen materials that go into each product, and he points to the various machines, explaining their roles: One cuts leather; another sews the upper part of the shoe into place. There’s a flash activator that looks like a convection oven for gluing, and a press that uses 12,000 pounds of pressure to make the sole stick to the bottom of the shoe. There are special stitching machines and stamping tools, which inscribe each product with a model and collection number, much like what you’d see on an art print. In between each step in the process are human hands — those of the Jameses and their four employees — which measure and align all the pieces. Before the insole is placed, each shoe is signed by the worker who finishes it — a personal mark from its maker. 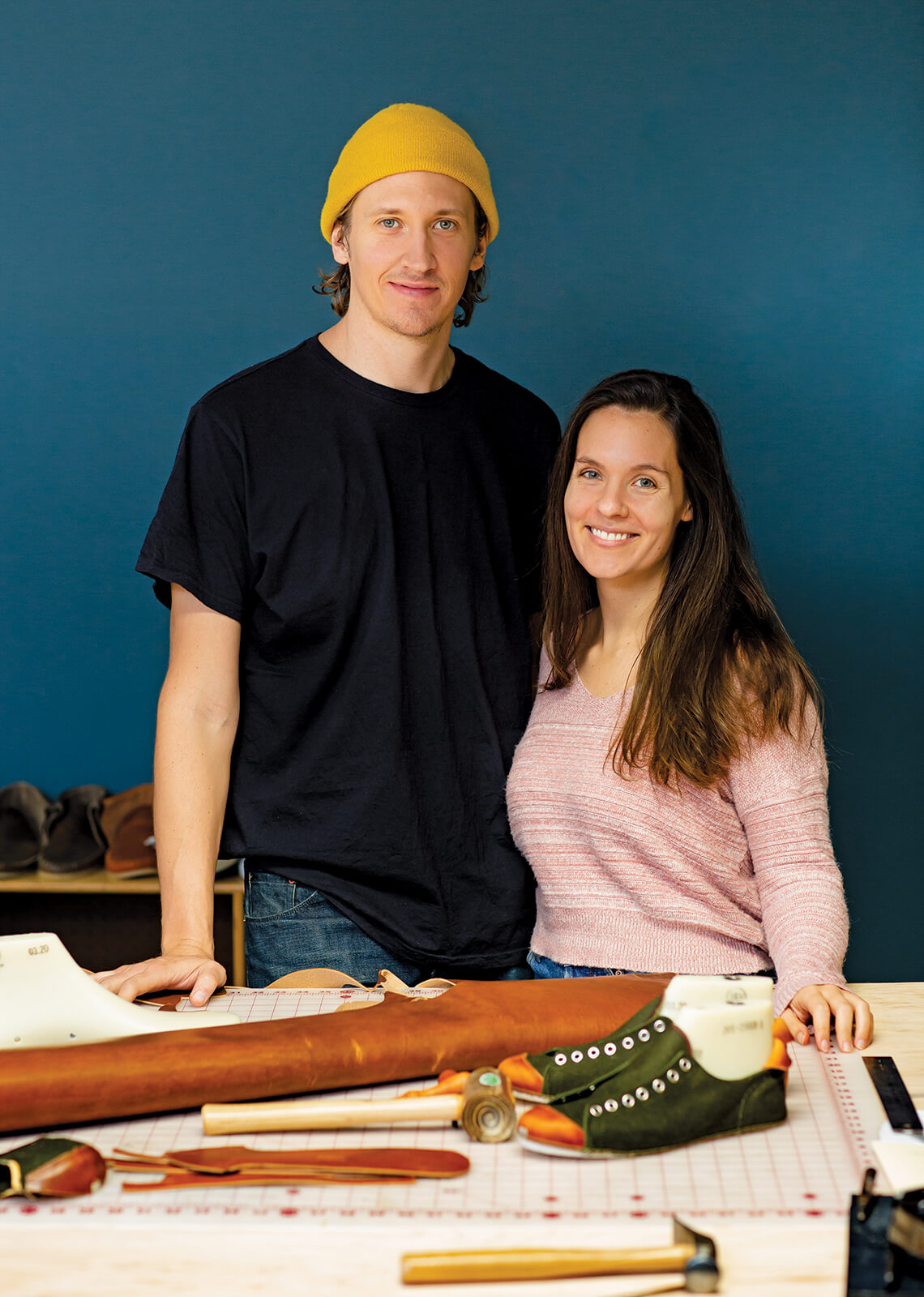 Justin and Amanda James learned the art of shoemaking one step at a time. Today, their Opie Way brand is winning awards, and their story is warming hearts. photograph by Tim Robison

“I think people have a connection with shoes that they maybe have never realized,” Justin says. Although shoes are among the most universal and utilitarian items of clothing in our closets, they also say a lot about our personality, style, and even our social status. Well-worn shoes are beholden to an individual’s story; they carry with them memories of experiences and paths taken.

That symbolic approach to footwear is something the Jameses contemplated at length before launching Opie Way in November 2019, and it carries through in styles like Riverside Hi, the rich brown leather high-top shoe that won this year’s Made in NC Award in the style category. The company’s two lines of men’s and women’s low- and high-top sneakers (Haywood and Riverside) are made from either vegetable-tanned leathers that age beautifully or military canvas, much of which is procured from former North Carolina textile mills. “I think when you buy a pair of shoes, they should be worth what you paid for them, and they should keep for a long time,” Justin says, adding that if customers wear through the soles of their Opie Way sneakers, they can send them back for repair so they can keep on wearing them.

When the first pair of Opie Way shoes rolled off the production line, the company joined a tiny fraction of manufacturers in the U.S. that produce handmade sneakers. Opie Way’s Chuck Taylor-esque kicks bear the appearance of refined craftsmanship — the sort that comes from decades of experience or an apprenticeship with an expert artisan. But the Jameses’ path to shoemaking defies that assumption. Their story began with an extraordinary love of Nike shoes and involved years of trial and error, plus a giant leap of faith.

“If I’m not going to design shoes for someone else, then I’m going to make them on my own.”

“I’ve loved shoes since I can remember,” says Justin, who, at 29, wasn’t even born when one of the most popular sneaker styles of all time came out in 1988. He got his pair of Air Jordan 3s when Nike did a retro run of the basketball shoes about a decade later, and he admits that he didn’t put them on for several days because he didn’t want to crease or dirty them. “It just changed my world,” Justin says of the brand. “I studied everything about it — the style of the design, the material.” By the time he reached middle school, Justin was intent on one day designing shoes for Nike.

He and Amanda, both Asheville natives, met at 15, and Justin’s passion for sneakers eventually became hers. “I would buy him shoes as presents,” she says. “I was always trying to find a shoe he wanted, waiting online to get it right when it came out.” During their teen years, the two of them would sit and draw shoes together. They operated an eBay store throughout high school and college, reselling rare collectible sneakers they’d find on the cheap.

Both attended Appalachian State University, Justin studying industrial design, prepping for his desired role at Nike, and Amanda majoring in education. But in learning about the downside of mass-produced goods, Justin says, “I had this weird tug on my heart. I didn’t like how these large companies do things.”

Resigned to set aside his dream, he ended up working in marketing. The couple moved to Charlotte, where Amanda taught middle school and Justin took a corporate job that left him unfulfilled. “I had this thought: If I’m not going to design shoes for someone else, then I’m going to make them on my own,” he says. So he bought two vintage sewing machines and taught himself to sew. It was a turning point, but where to turn next took some searching.

Justin caught a break when a boutique shoemaker in Los Angeles offered to sell his equipment to the couple and show them the ropes. “He didn’t want to sell to a larger company, who likely would’ve put the equipment in storage just to squash out the competition,” Justin says. “He wanted to pass the torch.” It was exciting, but prohibitively expensive for the Jameses. Then, just as Justin was about to give up on the offer, Amanda’s grandfather unexpectedly came on as an investor.

In January 2019, Justin, Amanda, his dad, and her granddad flew to L.A. to seal the deal. Within a month, the Jameses had signed the lease for their micro factory in that vast industrial park in Fletcher. They named their new company Opie Way for their two young daughters, Ophelia and Wayland.

With just over a year of production experience under their belts, the Jameses have hit their stride. When someone purchases a pair of Opie Way sneakers, the shoes are made to order. Over a four- to five-week period, Justin and Amanda correspond with their customers, giving them a role in the making of their sneakers.

Justin hopes to expand Opie Way’s production output and the number of sneaker styles, as well as its roster of retailers, most of which are currently on the West Coast. But for now, the Jameses are happy just to have prevailed. “This is the hardest thing I’ve done in my life,” Justin says. “If you’d have told me in middle school, ‘Not only do you get to design shoes, but they’re yours,’ that would’ve seemed unbelievable. I’m getting to live my dream.” And if there’s one valuable lesson that the Jameses have learned during their quick rise to success, it’s to embrace the wear and tear, the stains, the blemishes, and everything else that gives a sole soul.