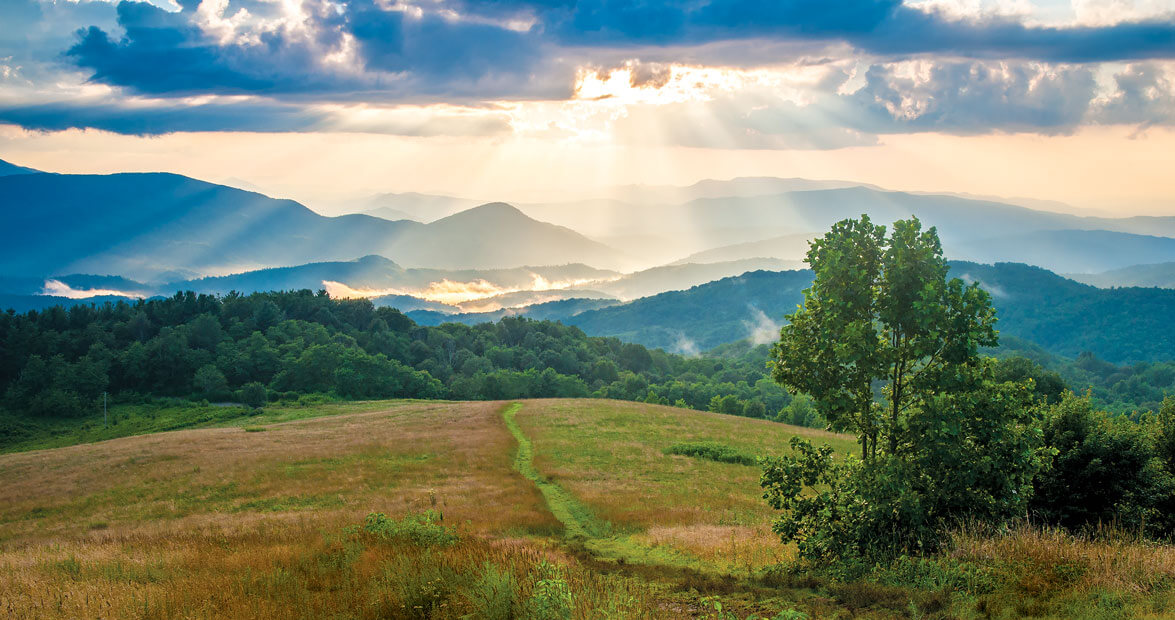 By the time northbound thru-hikers on the Appalachian Trail reach Madison County, they’ve traveled more than 200 miles from their starting point in Georgia on their way up to Maine. They’ve covered much of that distance in deep forest, becoming intimately familiar with the bark of poplar trees and the sound of clear-running streams. They’ve been sheltered by wilderness, and the grandeur of their long journey has been intangible — until the forest opens to reveal Max Patch, a Southern Appalachian bald in Pisgah National Forest.

Suddenly, they are taller than the trees, standing on a 350-acre tract of land with an unimpeded view of their surroundings. From 4,600 feet above sea level, they can see the magnitude of their undertaking: the wild land they’ve traveled, the peaks they have yet to mount — all of it extraordinary.

The glory of this moment has given the bald a reputation as the “crown jewel of the Appalachian Trail.” But though the trail has made Max Patch famous, most of its visitors are not serious hikers. Some only climb from as far as a lower parking lot to spend the day with their youth choir, lifting their voices in song. Others arrive with a yoga class or a group of friends to fly kites or blow bubbles.

Every morning and every night, the sun rises and sets, often with strangers brought together to watch the light change as the planet spins. The sensation of looking out from the summit is similar to what astronauts must experience when they view Earth from space, admiring it as home. But while aesthetic appreciation of Max Patch is near universal, “home” means different things to different people.

Like pieces of a crazy quilt, beautiful in their diversity, visitors are connected by thousands of disparate yet meaningful memories of this shared space. Max Patch is proof that, just as a person can be loved in as many ways as there are people who know them, so, too, can a place.

If you’d passed Jerry Sebastian and his girlfriend, Jill Jenkins, on their ascent to Max Patch on that October day, you might’ve smiled at their Aussie-mix dog, the one with the soulful eyes. You might have waved hello or said, “Have a good hike.” But you probably wouldn’t have noticed that Sebastian was abnormally nervous. There wouldn’t have been any indication that this couple’s lives were about to change.

They’d had their second date at Max Patch, years earlier, after meeting at an arts festival. It was there that the two realized they had dogs with similar names: Stella and Chella. It seemed funny at the time. Later, it felt like fate. 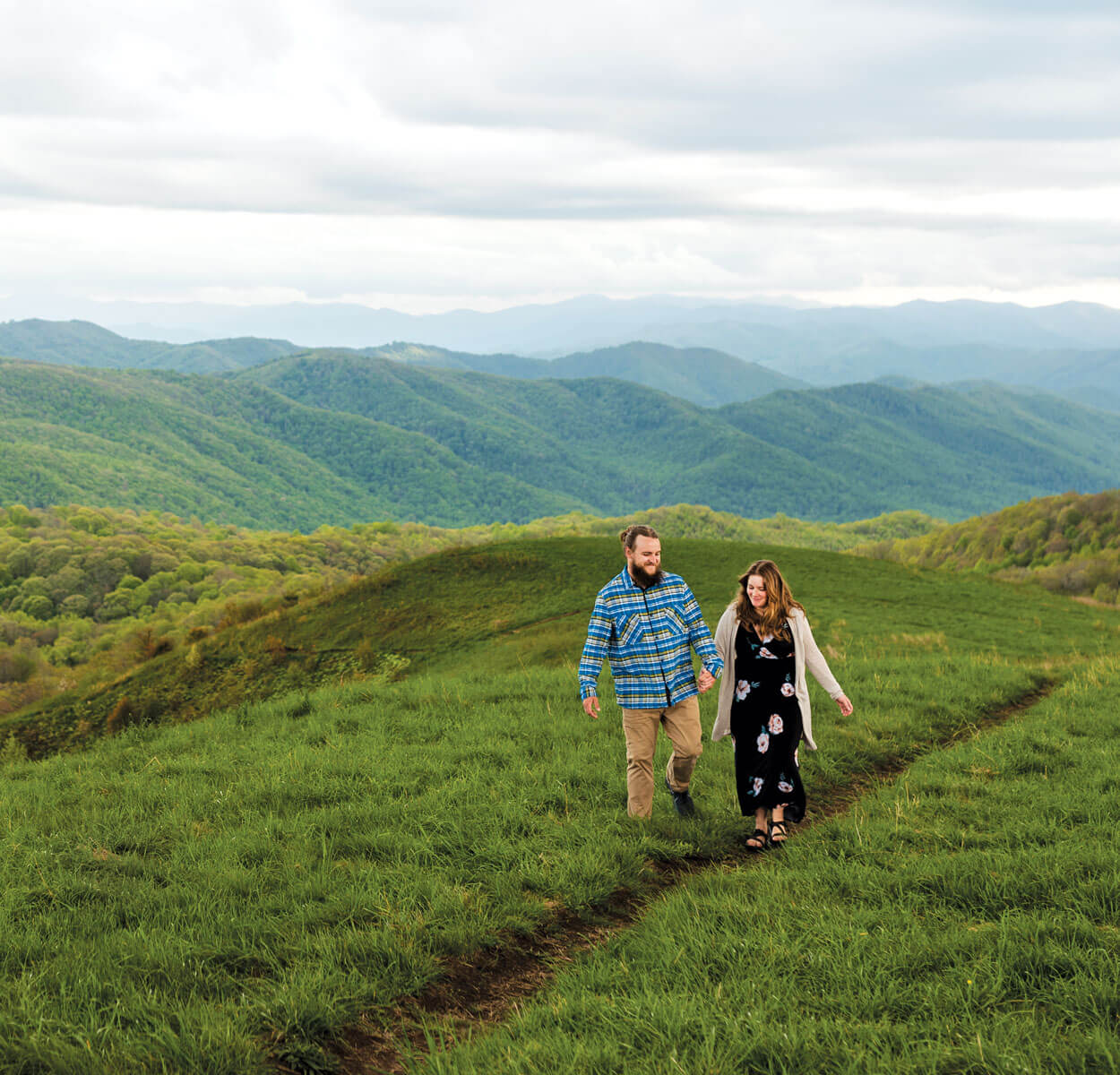 Jerry Sebastian and Jill Jenkins recently got a new Aussie puppy, which they named Freya. Soon, she will accompany the couple on their walks up to Max Patch. photograph by Jack Sorokin

Stella, Jenkins’s dog, played a role in their early bond. When Jenkins traveled, she often left Stella in Sebastian’s care. Over time, Sebastian grew to love the dog as his own, and his quality caretaking led Jenkins to notice his ability to nurture. “[Stella] helped Jill build trust in me,” Sebastian says.

Recently, due to a struggle with cancer, the dog’s needs had been increasing. The three of them were returning to Max Patch that fall day because Stella was dying.

“I’d wanted to propose for a while,” Sebastian says, “but Stella’s condition gave it all a sense of urgency. She wasn’t going to make it to a wedding, but maybe she could be there when I proposed. If we waited another week, Stella wasn’t going to be able to walk up to the summit. Knowing this gave me courage. I knew it had to be then, or Stella wouldn’t be with us.”

Sebastian decided to propose at Max Patch not just because it had personal significance, but also because he knew that it was a place that the couple could revisit.

“Max Patch is public land, which means there’s a promise that it’s not going to become a parking lot or a shopping center,” he says. “It’s going to stay what it was, what it is, a place of no distractions and a lot of stars.”

When Sebastian popped the question, Stella was there, wearing an expression that Sebastian couldn’t help but feel was a look of approval. A few weeks later, she was gone.

“It’s been hard to let her go, but if Stella’s purpose was to bring me and Jill together, her life’s work was complete,” Sebastian says. “We’ll go up there with our next dog, and our next dog, and, hopefully, our kids.”

Matt Drury was covered in dirt when he noticed birders intently studying an area of brush on Max Patch. Even from a distance, he could see that they were looking at prime golden-winged warbler habitat. As a resource management coordinator for the Appalachian Trail Conservancy, Drury was there to plant native species as part of an ongoing effort to make the bald more enticing for the pollinators and for the warbler, whose numbers have declined so sharply that it’s at risk of becoming endangered. The 800 native plants that he and his crew had transplanted to Max Patch were a low-lying, living welcome mat. Could it be that birds were finally accepting their invitation? He brushed mountain soil from his hands and started hiking up to see. 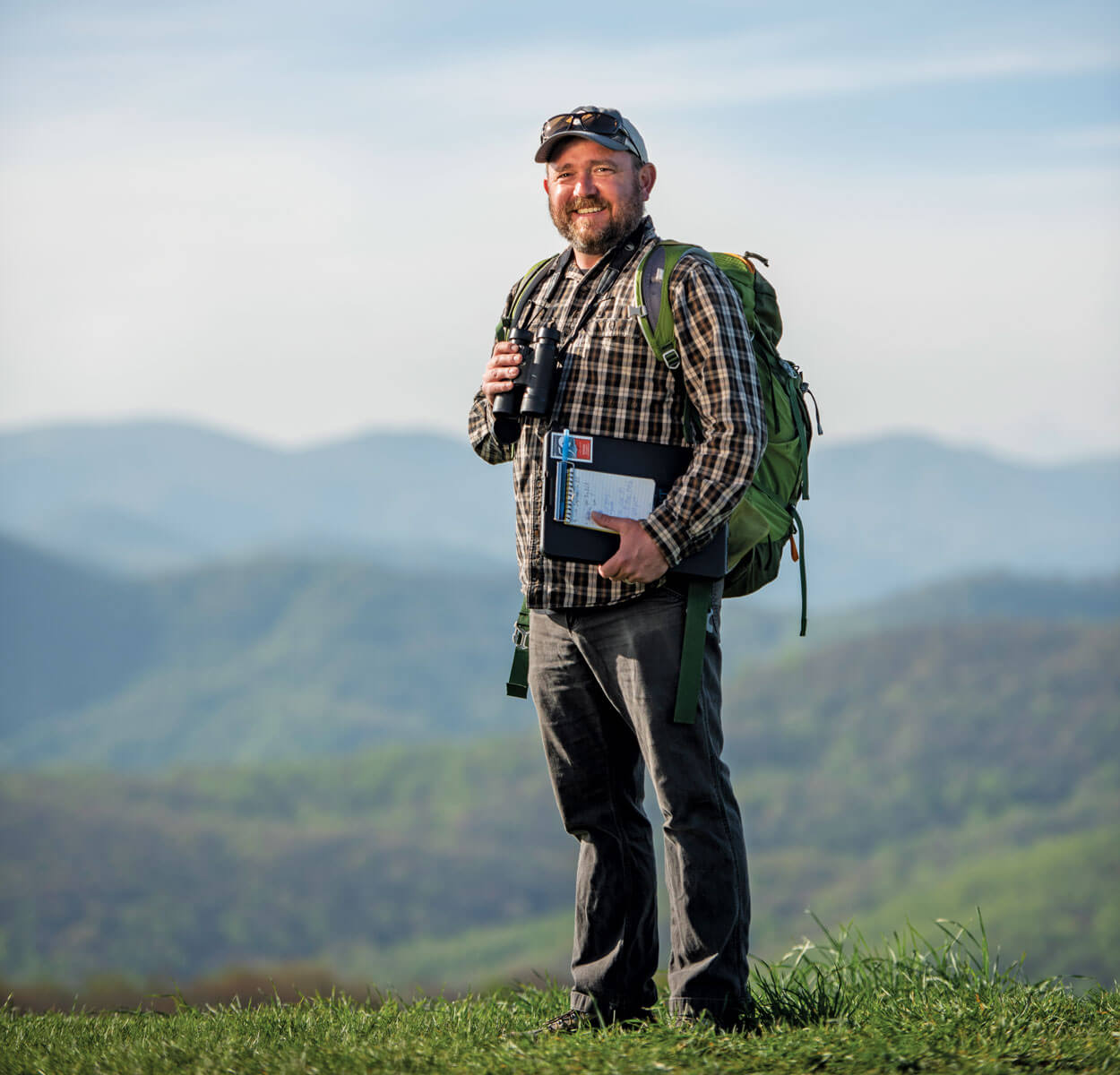 Among Matt Drury’s more urgent projects is encouraging visitors to take appropriate trails to Max Patch. Protecting habitat, he says, protects the wildlife that depends on it, such as the warbler. photograph by Jack Sorokin

When he emerged from wooded trail into open meadow, Drury didn’t see just one warbler; he saw two. A breeding pair. A promise that new life was on its way. The birders who’d brought his attention to the warblers were giddy. Even Drury, who doesn’t usually get emotional about things like that, couldn’t help but feel hope rise in his chest.

“I’d worked that land for years without seeing or hearing of a breeding pair,” he says. “The memory of that day continues to give me encouragement.”

Like most species moving through, the warblers were migratory. On the spring day when Drury saw them, they were likely sizing up possible breeding habitat, or stopping by on their way to breed up North. Just as monarch butterflies use Max Patch and its native milkweed as a way station on their journey to Mexico. Just as humans visit this mountain meadow as a respite before traveling back to urban areas across the Southeast.

“Birds tie me to the land and give me a sense of place,” Drury says. “No matter where you go in the world, you’re sharing the landscape with birds, and they all have stories.”

On August 21, 2017, Sarah Beasley left her house, climbed a steep bank, walked through a rhododendron tunnel, and emerged on the section of Max Patch next to her backyard. Her family has lived near the mountain, where they run Kana’ti Lodge, for the past 15 years, but she’d never seen it quite like it was that day. “There was a band playing live music up there,” she says. “It felt like a party on top of the world.”

The crowd that had gathered to watch a partial solar eclipse was the largest she’d ever seen at Max Patch. In the first stages of the eclipse, as the moon overtook the sun, a pewter light fell on the brilliant goldenrods and darkened the open faces of Queen Anne’s lace. Birds went quiet. People wearing protective glasses froze in place.

When the eclipse reached its apex, Beasley heard a collective gasp. “It’s like the crowd was inhaling in unison. It was amazing,” she says. “Even when there isn’t an eclipse happening, Max Patch is a place of community. It might be my backyard, but I’m glad it’s something everybody gets to experience.”

Trees were budding citrus colors and the air was still tart from winter when Bev MacDowell found a pair of hiking boots on the Appalachian Trail. They were accompanied by a cross made from twigs, which made her suspect that the shoes belonged to someone who had passed away. As a volunteer monitor with Carolina Mountain Club, MacDowell is in charge of keeping tabs on the 2.3-mile section of the trail that crosses Max Patch. She picks up plenty of trash. But she’d never found a memorial there. 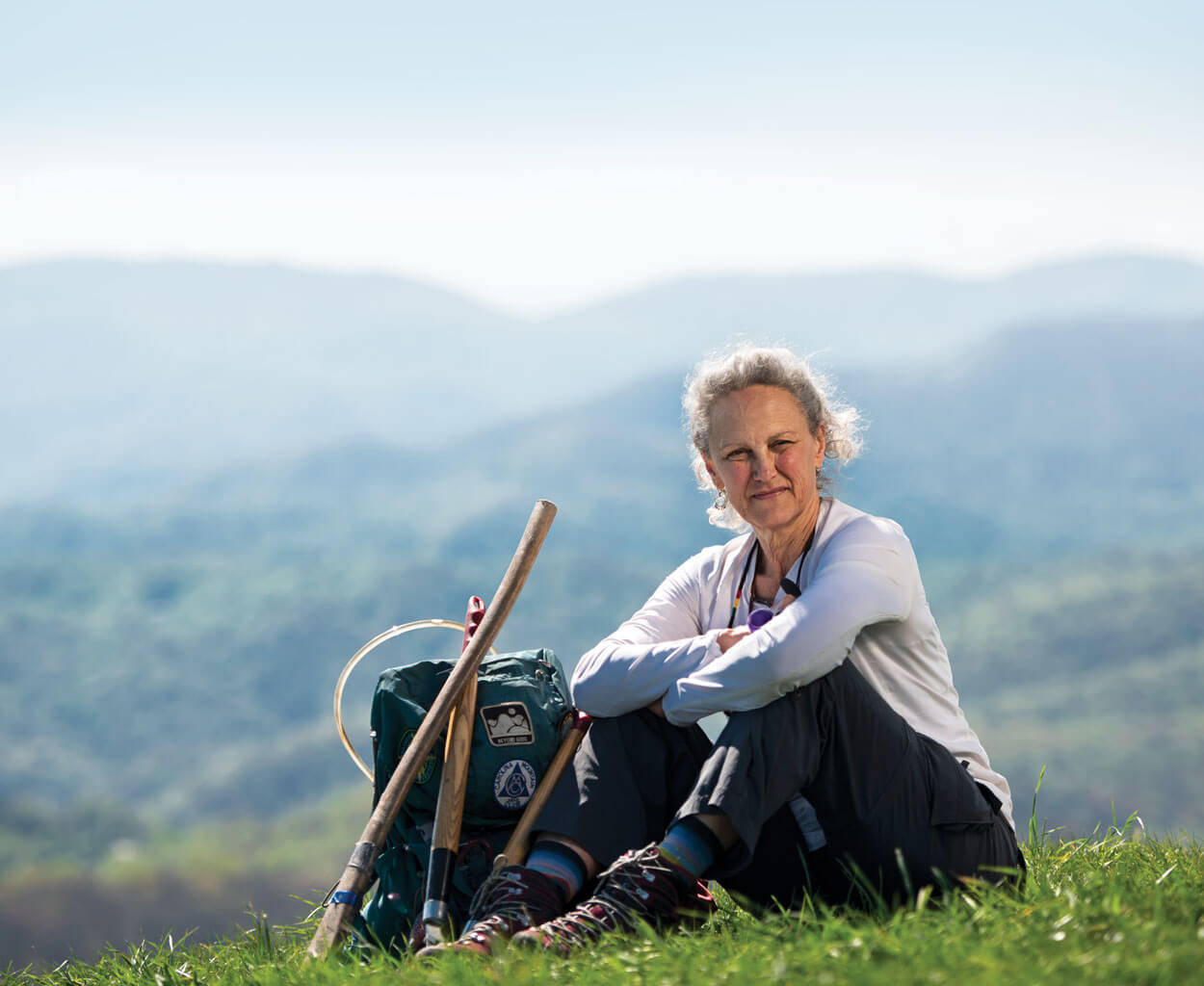 While surveying the Max Patch area, trail monitor Bev MacDowell thinks of the old boots she once found: “Someone who loved the Appalachian Trail, just like I do, had lived and walked in those boots.” photograph by Jack Sorokin

MacDowell doesn’t contemplate who might have left the candy wrappers and soda cans she collects on a regular basis, but when she came across those boots — brown leather, with boulder-scuffed toes — she couldn’t help but wonder: Who left them? Who wore them? Should she pick them up? Ultimately, she decided to leave them where they lay. Then, one day, as mysteriously as they’d arrived, the boots and cross disappeared.

Maybe whoever put the shoes there took them back.

Maybe a stranger pulled them on and walked away. Whatever happened to those boots, seeing that memorial on Max Patch remains MacDowell’s most meaningful caretaking memory.

“Every time I saw them, they were a reminder to enjoy the scenery, live in the moment. It’s all fleeting,” she says. “But Max Patch, as long as we take care of it, will be here even when we’re not. When our kids are grown, we’ll be gone, and they’ll have to step into our shoes to make sure national forests are protected.”

“For a lot of people, Max Patch is a family thing: throwing a Frisbee around with people, flying kites with kids,” Wayne Crosby says. For him, it’s a solo getaway. He adores Max Patch, but he’s not so sure he wants to let everybody know about it. “Locals won’t go there on weekends,” he says. “It turns into an absolute zoo.”

Given that it’s part of Crosby’s job, as proprietor of Hot Springs’ Bluff Mountain Outfitters, to help people find the area’s most beautiful outdoor spots, it’s a hesitancy he’s had to overcome. When he tells customers about Max Patch, he describes it as being right out of The Sound of Music. “Picture Julie Andrews, dress twirling, that sort of thing,” he says.

His first visit was in 1988. But it wasn’t until the winter of 2016 that he had an experience that would transform his view of Max Patch from perfectly beautiful to downright otherworldly. That morning, before dawn, the post-blizzard air was so cold that the sky seemed it might shatter stars onto the snow. As Crosby drove the rough roads to the parking lot, lugging skis, he thought about turning around. But he pushed on, hiking up the mountain to emerge in the open space as the moon was setting. Suddenly, the silver world was crowned with a golden halo. “It was like being on another planet,” he says.

He could see for 100 miles in every direction. He exhaled and watched his breath billow like a crystalline cloud. Then, he slid into the expanse, skis hissing as he laid first tracks.