I see the spots when the fish is still 20 feet from the boat, when the puppy drum turns after I set the hook. For a split second, I can make out a long line of inky-black splotches along its flanks. I stifle a holler. The eyespots on a red drum’s tail hold a special allure. Most red drum — North Carolina’s official state saltwater fish — sport one, two, and sometimes three eyespots near the tail fin. More than that is a rarity. This fish looks like it’s been on the losing side of a paintball game.

Capt. Seth Vernon sees them, too. “Holy cow!” he exclaims. “Do you see the spots on that fish?!”

I wince. I don’t want to say a word, scared that I’ll jinx the moment, but in another 10 seconds, I have the fish in the boat — with all of its 29 spots. It’s not the biggest red drum in the world, but I’m not after the biggest red drum in the world. I’m after something that can only happen in a wild corner of a place like this, on a small skiff, in skinny water, with a veteran guide on a poling platform at my back. All those spots are gravy.

He plays the tides like a game of chess, always thinking two hours into the future.

To many, perhaps, the notion of a full-time fishing guide evokes an anachronistic persona, a swarthy, grizzled old cuss — if it brings to mind any stereotype at all. We have charter boat captains aplenty here, and a rich tradition of big-game fishing in the Gulf Stream off the Outer Banks. Yet the idea of guiding as a profession, especially on the intimate scale of a single guide with a small boat — or no boat at all — might seem out of place in modern North Carolina.

But Vernon is one of a surprising number of fabulous, world-class, globally experienced guides working saltwater marshes and cold-water trout streams in North Carolina. These are fishing guides who’ve built full-time, raise-a-family careers out of their own passions for the wild. It’s a lifestyle whose reality is far different from the romance, like saying that all an accountant does is count money.

Still, it’s the only way to live for a guide like Vernon.

On his poling platform, Vernon plays the tides like a game of chess: always thinking ahead, always thinking two hours into the future. Calculating where he wants to be when there are three inches less, or three inches more, water in the salt flats of the Cape Fear estuary. His angler might be merely enjoying the day, but Vernon’s always thinking about the next move at the same time as he obsesses over how to position the boat so the shadow of the fly line doesn’t spook the fish, and whether to chance poling the boat five feet closer to give his client a better shot.

And he’s going through all of this not for the thrill of catching fish, but for the satisfaction of watching me catch fish. It’s an exquisite skill set, one to which many are not suited.

As a kid growing up in Houston, Texas, and later Spartanburg, South Carolina, with Cajun grandparents in Baton Rouge, Louisiana, Vernon experienced fishing and hunting from a communal perspective. “That Cajun culture and its adage of ‘let the good times roll’ meant you had a responsibility to show guests a good time. I grew up seeing that with my dad’s family, at fish fries and crawfish boils and duck hunts at the family camp.” 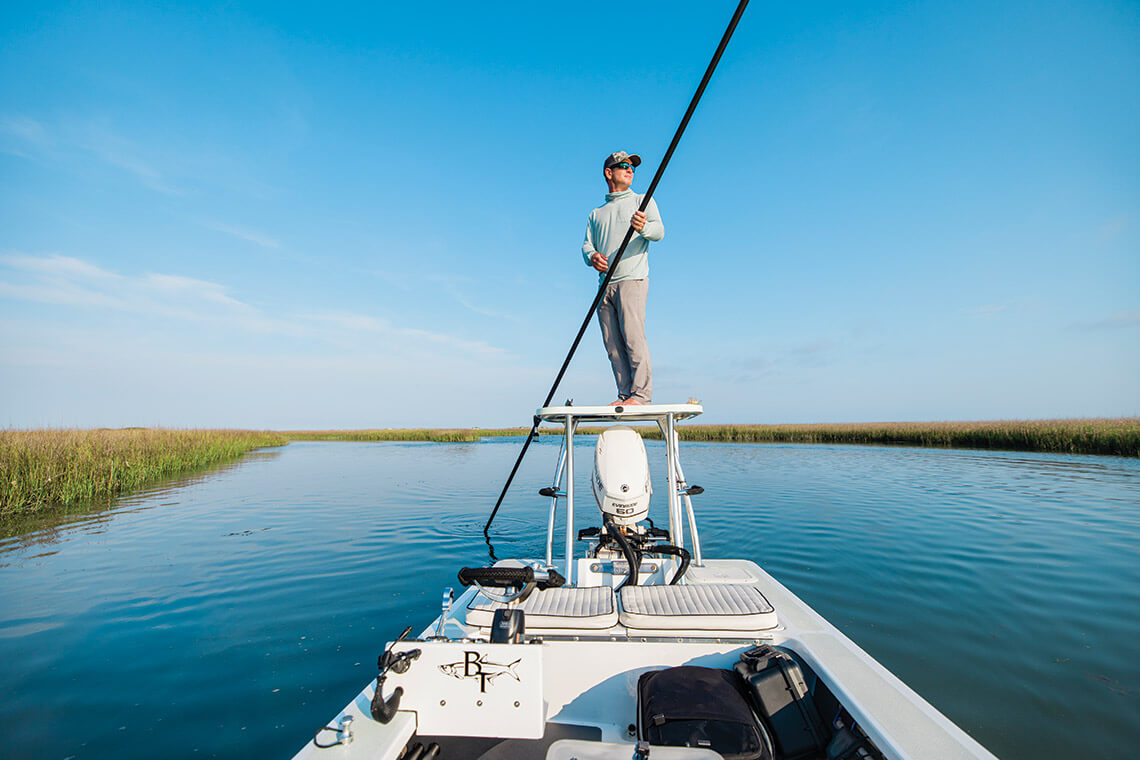 But the idea that sharing the spirit of Laissez les bon temps rouler could be a career — guiding as a legitimate job choice and professional pathway — didn’t occur to him until he was in college at Appalachian State University. There, he managed his class schedules so he could guide trout anglers three or four days a week through Foscoe Fishing Company, a de facto incubator for many North Carolina guides. He spent a season guiding in Alaska and, after college, guided in the North Carolina and Tennessee mountains and managed a fly shop in Augusta, Georgia. Along the way, he visited the Wilmington area with a friend who had a family home on Figure Eight Island. “Which is really unfair,” he laughs, “to fall in love with a place based on Figure Eight Island.” In 2004, he and his wife, Francesca, moved to Wilmington, where he co-owned the landmark Intracoastal Angler shop.

At the time, he recalls, just a handful of locals were sight-fishing the shallow marshes in the Cape Fear estuary and along the Intracoastal Waterway. “It was virtually untapped,” he marvels. “I began to think of taking that pioneering spirit and passion I’d seen in the North Carolina mountains and in Alaska and applying it here. It was an awesome canvas to work with, and there was no one telling me that it couldn’t be done.” Vernon kicked off Double Haul Guide Service in 2006. Other than rising nearly every day at 5 a.m. to ready the boat and tying flies most nights after his family is in bed, he hasn’t punched a time clock since.

I’m not super concerned about the clock, either, as Vernon and I fish out the falling tide. We pick up a few more puppy drum and a single spotted sea trout, but by midafternoon, the wind picks up and the fishing slows, and Vernon shakes his head. “You know what we’re not seeing anymore?” he asks. “Birds. Life.” He’s right. All morning, we’d been accompanied by egrets in the marsh, ospreys overhead, sanderlings, terns, and oystercatchers huddled on the flats. They’ve all vanished. “With the wind coming up,” he says, “it affects everything.”

Not least of which is my casting. So it seems like a good time to go with the flow, so to speak, and leave the marsh and oyster lumps and schools of reds to wait, in their own way, for the water’s return.

And Vernon’s. He’ll be back the next day and the day after, passing on a lifetime of passion and intimate knowledge to whomever shares his skiff. The guide’s life has more than its fair share of incertitude, but one thing is as sure as the tides: He’ll be out there.

Our State Knows Best: What a catch! We talked to three fly-fishing experts about their favorite spots in the state to reel ’em in, the essential gear and tips you need to get started, and the lure of the line. To read the interviews, visit ourstate.com/osknowsbest.