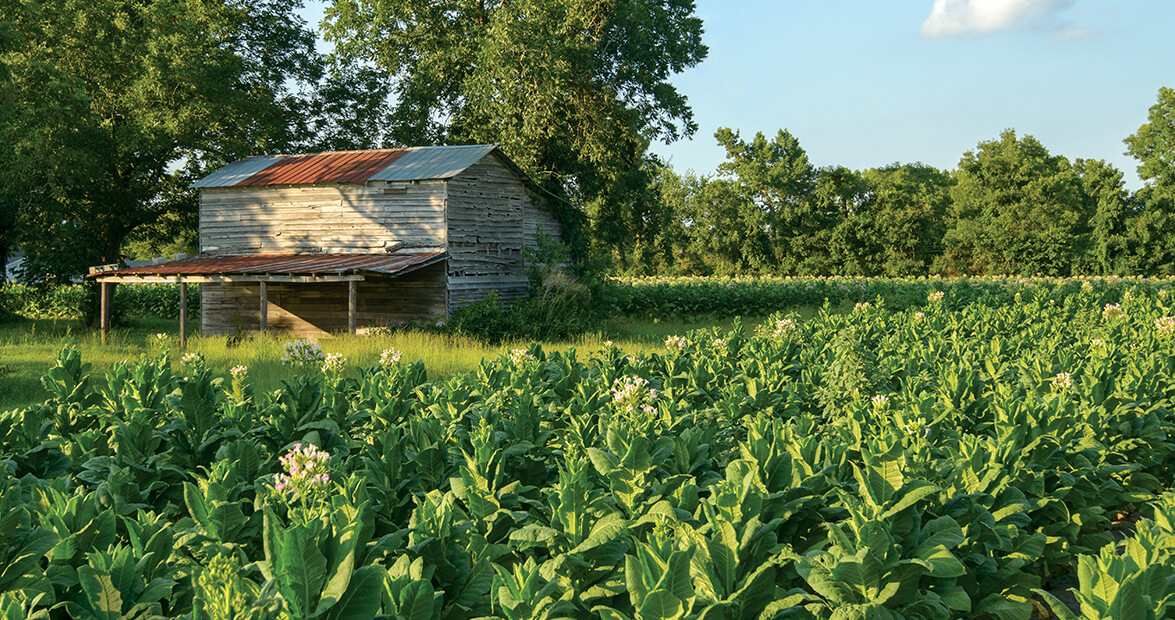 Bobby Joe Fisher got it right, I think. But let me say this: I really don’t know what I’m talking about. We’re sitting at the McDonald’s in Battleboro, on U.S. Highway 301, right there at Wesleyan College, and he’s remembering all those times he rode the county back roads with his son, Joe, taking stock of the summer tobacco crop. Fisher is 81 years old, with a broad face and big hands and a grin that squeezes his eyes into a cheerful squint. “I’d see a field of tobacco all topped out and cleaned up and standing tall in the sun,” Fisher beams, “and I couldn’t help myself.” He must have said it a million times, he figures: Now right there, he’d say to Joe, is a pretty field of tobacco.

At this, he reaches across the table to tap the back of my hand. He wants me to pay close attention. “And every time,” Fisher laughs, “my boy would tell me: Daddy, the only pretty field of tobacco is a stripped field of tobacco.”

Sipping sweet tea and taking notes, I grin back and nod, like I know just what it feels like to work through a row of tobacco, drenched with dew and sweat, squishing hornworms with my fingers and snapping sucker shoots off the stalks till my hands bled and stung. Like I’d been there myself.

Maybe you remember. Maybe you grew up on a tobacco farm, or had an uncle with a big enough tobacco quota to press all the kinfolk into service. Maybe you spent your summers crisscrossing those 100-degree fields, once, twice, three times, four, planting and pruning and priming and stacking, head swimming with the heat, back screaming, eyes running with the pungent scent of the leaves and flowers and suckers and stems, fingers sticky with mashed bugs. If so, then you are going to howl when you hear this, but I’ve always wished I’d worked on a tobacco farm.

For much of my life, I’ve heard the stories, from college pals to coworkers and folks I run into at the tire shop. Working on a tobacco farm was the formative experience of their lives. Summers spent in a tobacco field sculpted their views on work and community, and shaped their childhoods like a potter shapes clay. Not to mention that it sharpened their sense of just how long and hard a kid could work alongside Mama and Daddy, laboring at their side. 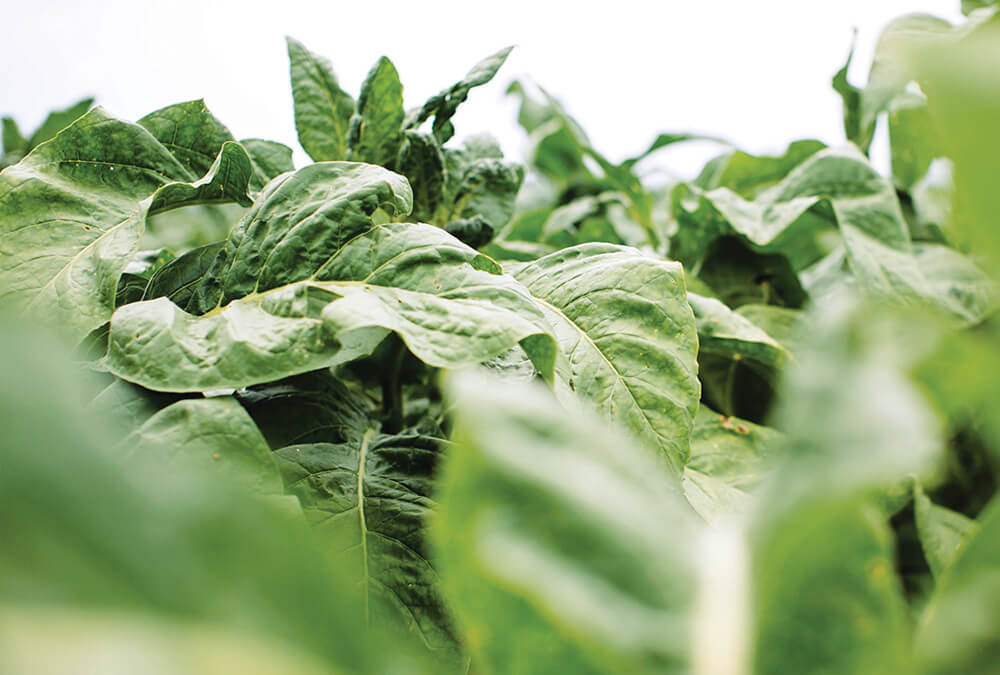 Mid-season tobacco conjures vivid, if not fond, memories of long days of work in the heat of summer. photograph by Geoff Wood

“It was an upbringing that cultivated a wholesome work ethic,” chimes in Parker Philips III. He’s here with his friend Fisher, another ambassador from the tilled-up loam of Nash and Edgecombe counties, who remembers getting “baccer sick” from hours of pruning tobacco in the heat, and recalls the mule-drawn slides that ferried leaf to barn. I stifle a grin. I’m betting it didn’t feel so wholesome at the time.

It’s a controversial subject; that, I understand. No rose-colored glasses here. But there’s no denying, either, that this shared experience of growing up on a tobacco farm binds tens of thousands — hundreds of thousands — of my fellow North Carolinians, one to another. I envy their common vocabulary of “settin’ out” the tobacco plants and “layin’ by” the rows, their wistful memories of summer nights scented with a flue barn fire. I’d like to share their ties to the land, the seasons, their neighbors. I’d like to have a few stories of barely making it to my Mason jar of water, stashed in the shade of a tobacco plant, the sole reward for pulling another row. I wish I’d worked on a tobacco farm.

“They call it a 13-month crop,” Philips says. “There was never a time when a tobacco farmer didn’t have something to do.” But the serious kickoff came in January, when the seeds were started in the fields. For decades, you could drive through the countryside early in the year and pass field after field ribboned with 20-foot-wide white cheesecloth that protected the seedlings from frost.

And so began a summer of ceaseless labor.

By mid-April, tobacco seedlings might reach from a man’s fingertips to just past his wrist. That meant it was time. Hardware stores emptied their shelves of bushel baskets. Kids stayed home from school to get the plants in the ground. “Teachers worked with you,” Fisher tells me. “They knew this was a vital time. The county would close schools if they had to, help folks get the plants in the field.” From the western Piedmont’s red clay glop to the sandy fields of the Coastal Plain, Farmall Super A one-row tractors growled across North Carolina. Most often, the women sat on the back of the transplanter, feeding the seedlings into the ground. The machines clicked when it was time to drop the plants, setting the shoot. Kids walked behind, wearing their daddies’ hunting coats, oversize pockets stuffed with more seedlings to fill in the gaps missed by the tractor. The family’s future dropped into the soil, one green shoot at a time.

And so began a summer of ceaseless labor. It might take four tractor passes to throw up enough dirt to build up the rows as the shoots sprouted skyward, and that last “lay by” pass was cause for celebration. By late June, the tobacco plants were waist-high to a 10-year-old kid. By the Fourth of July, most had flowered, each plant capped with a showy blossom that signaled a new season of work. Breaking off the flowers — “topping” the crop — was critical, and required the first of many foot-sore trips through the tobacco. Philips shakes his head just thinking about it. “Walking on the sides of them rows, turning your shoes over,” he says. “It’d wear you slam out.”

Problem was, once the tobacco plants were topped out, they funneled all the energy used to grow flowers into growing sucker shoots.

Fisher and Philips wilt a bit at the thought of it.

“Once you topped ’em out, you’d better get ready,” Fisher says, and shakes his head. “Next comes the suckerin’. And oh, buddy,” he groans. “They would grow overnight. All you could do was just hope you kept up.”

Suckering seems to have been the most dreaded of the tobacco chores. Some plants were so tall they towered overhead. Morning dew soaked you to the skin. You walked the rows, snapping suckers off with your fingers. You poured sweat but didn’t dare wipe your eyes as the “baccer gum” turned your hands sticky and black. You got to the end of a row, and you took a few steps to the next. Another long pull through a veiny wilderness of leaves. Get started. Work through the rain. Maybe there’s a piece of watermelon at the end of the row. A MoonPie if you’re lucky. But likely as not, what you found was what you just left behind: another row. 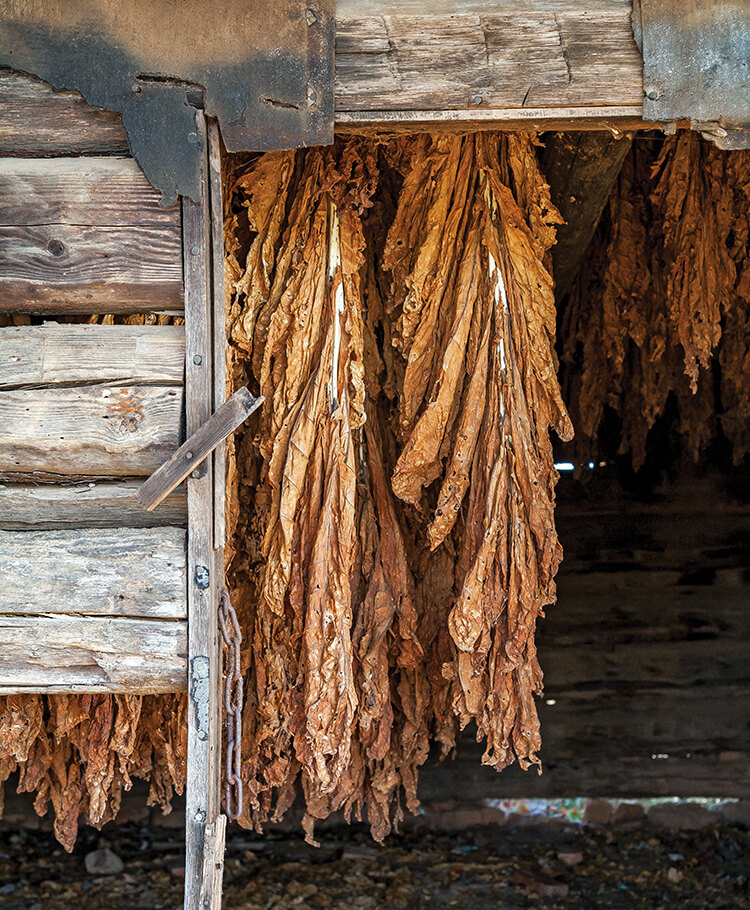 The fruits — well, leaves — of a worker’s summer labor hang in a tobacco barn near Walnut Cove. photograph by Jay Sinclair

At the end of the day, tobacco gum covered everything. You had to boil your clothes to get them clean. Most farmers made their own lye soap, the only concoction that would cut through the gum. An unforgettable mix of lye, hog fat, and water, box lye soap would burn your skin if you weren’t careful.

At the end of a long day “cleaning” a tobacco field, however, it was box lye soap or nothing. After all, Philips explains with all the seriousness of quoting Scripture: “You couldn’t go in the house with gummy hands.”

I nod and grin and scribble. It’s the best I can do.

This time of year, it’s a million degrees out in the tobacco fields. July is the turning point, the hinge on which the tobacco season pivots from planting and nurturing to harvest and reward. It’s a time seasoned with lyrical, melodious words for work so difficult it could lay a young man or woman flat out on the ground. Leaves were picked — or “primed” — from the bottom of the plant up, first the “lug” leaves, then the “cutters,” and then the “tips.” In summer rain and heat, the tobacco grew so fast that the old folks claimed they could hear the fields shouting. Mule- or tractor-drawn carts traversed the fields in pass after harvest pass. The leaves were stacked into slides and sent to the barns — another scene of complex pageantry as the leaves were looped to tobacco sticks and hoisted in the barns for curing.

I’ve heard it all. When I’m buying bait at a country store, I’ll listen to the old-timers tell their stories. “Them mules were like family,” I’ve heard them say. Or they’ll recall a tender moment in the tobacco fields. “My mama tied up my Mason jug with newspaper and string,” Fisher remembers. “Tried to keep the water cool for me long as she could.” I swear there are tears in his eyes.

That there was a time, buddy, they’ll say. Them was good days, but mostly good when you’re looking back.

So I drive the back roads on a summer afternoon, when the shimmering heat makes the tobacco plants look like they’re swaying in a breeze. There was a time when five acres and a pair of mules was blessing enough to feed a family, as long as that family spent its spare time raising chickens and pigs and a vegetable garden. What’s more astounding is that such a time wasn’t so long ago.

Looking across a tobacco field, I know just enough to tell when it’s time to top out a crop, or when the lugs have been taken off the stalk. Not much more. But I wish I did. Maybe that counts for something.