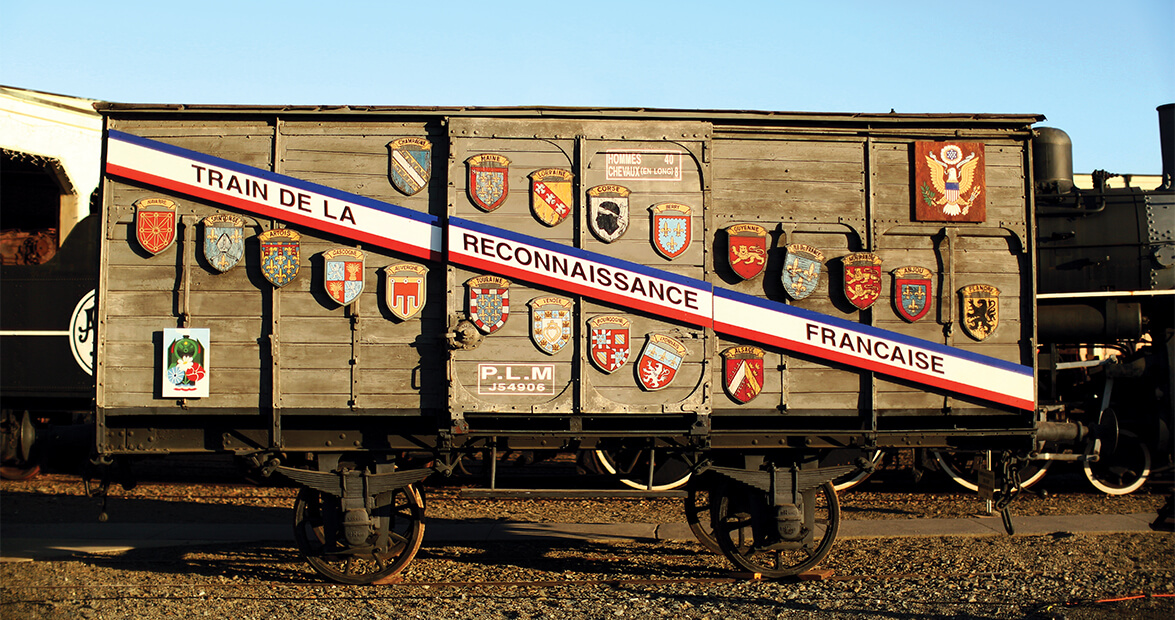 Far from home and aching for familiar comfort, a young French soldier spied a glimmer of hope on the bloody fields of Verdun. His tired eyes focused on a scrap of aluminum, a shred of military gear that had fallen in northeastern France during World War I.

He allowed his thoughts to wander to fields of clover, as green and promising as any memory of home. In the rare hours when the trenches grew quiet, he scraped the metal until it became a handsome ring with a flourish of clover at its center. Days later, he became one among hundreds of thousands who died in the 303-day Battle of Verdun.

Once a treasured keepsake of the soldier’s family, the ring has spent the past 67 years in the care of the State of North Carolina. It was one of thousands of items generously given by French citizens in 1949 for the French Gratitude Train, also known as the Merci Train.

Residents from every French province donated nearly eight tons of goods, ranging from embroidered handkerchiefs and fine china to toy soldiers and larger-than-life statuary. The effort was patterned after the 1947 Friendship Train, an American goodwill project in which people across the U.S. contributed food to war-torn France and Italy.

Gratitude was at the core of Alice Baumgaertner’s decision to send the ring and a photo of her relative from Paris to Raleigh. Sadly, the photo was lost over the years, along with her loved one’s name. But her gift remains as poignant evidence of the degree to which French citizens credited Americans — especially members of the armed forces, but also those who kept home fires burning — for their liberation from the grip of Nazi Germany. 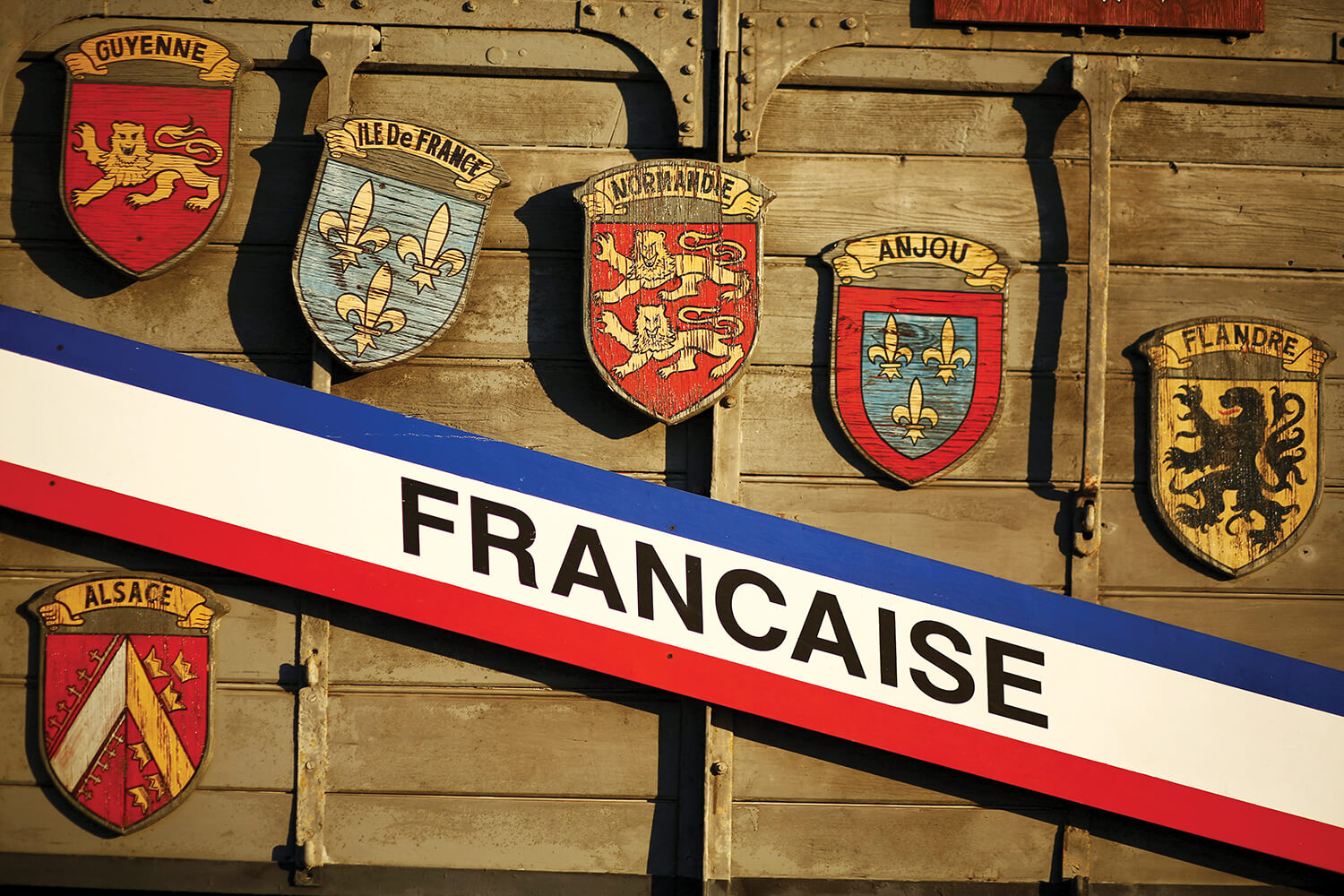 Outside, Merci Train boxcars were decorated with the coats of arms of French provinces and cities. photograph by Travis Dove

North Carolina’s boxcar was one of 49 shipped from France to America — one for each of the 48 states, with the contents of the remaining car shared between the Territory of Hawaii and the District of Columbia. On February 8, 1949, the boxcar was welcomed by Gov. Kerr Scott in Raleigh. A parade featured bands from Fort Bragg and Camp Lejeune, as well as a contingent of French dignitaries. Also participating was R.V. Collie, a Confederate Army veteran who’d marked his 105th birthday two days earlier.

News & Observer editor Jonathan Daniels made welcoming remarks at a ceremony held in Memorial Auditorium. He recalled that the Marquis de Lafayette, a close ally of George Washington during the Revolutionary War, rode up Fayetteville Street in an open carriage in February 1825. “The present occasion is not of a debt being paid, because no debt was owed,” Daniels declared. “But the gratitude of the French people warms our hearts and we are grateful for their friendship.”

The gifts arrived in wooden crates packed floor to ceiling in a 1918 French boxcar known as a “Forty-and-Eight,” a nod to its ability to transport 40 men or eight horses. World War I veterans would have been very familiar with the tight, windowless quarters.

Many of these boxcars have vanished, victims of decay or vandalism, but not North Carolina’s. In the 1960s, after being on display for many years at various sites in Raleigh, it was taken to Wilson by the North Carolina chapter of the Forty-and-Eight Society for restoration. In 1981, the boxcar was transported for long-term loan to the North Carolina Transportation Museum in Spencer, where it’s now a feature of the museum’s Roundhouse exhibit.

Today, many are surprised by the Merci Train’s story, but its arrival made big headlines in Raleigh. Curious crowds filled the Hall of History, a precursor to the city’s downtown museums, to watch crates being unpacked. Photos show women wearing hats and gloves, eager to inspect handmade lace and delicate demitasse sets, while children crowd to see dolls dressed in traditional French attire. Of particular patriotic interest was a fabric knot made from combed fibers of U.S. and French flags flown from the Eiffel Tower on May 8, 1945 — the day Germany ultimately surrendered. 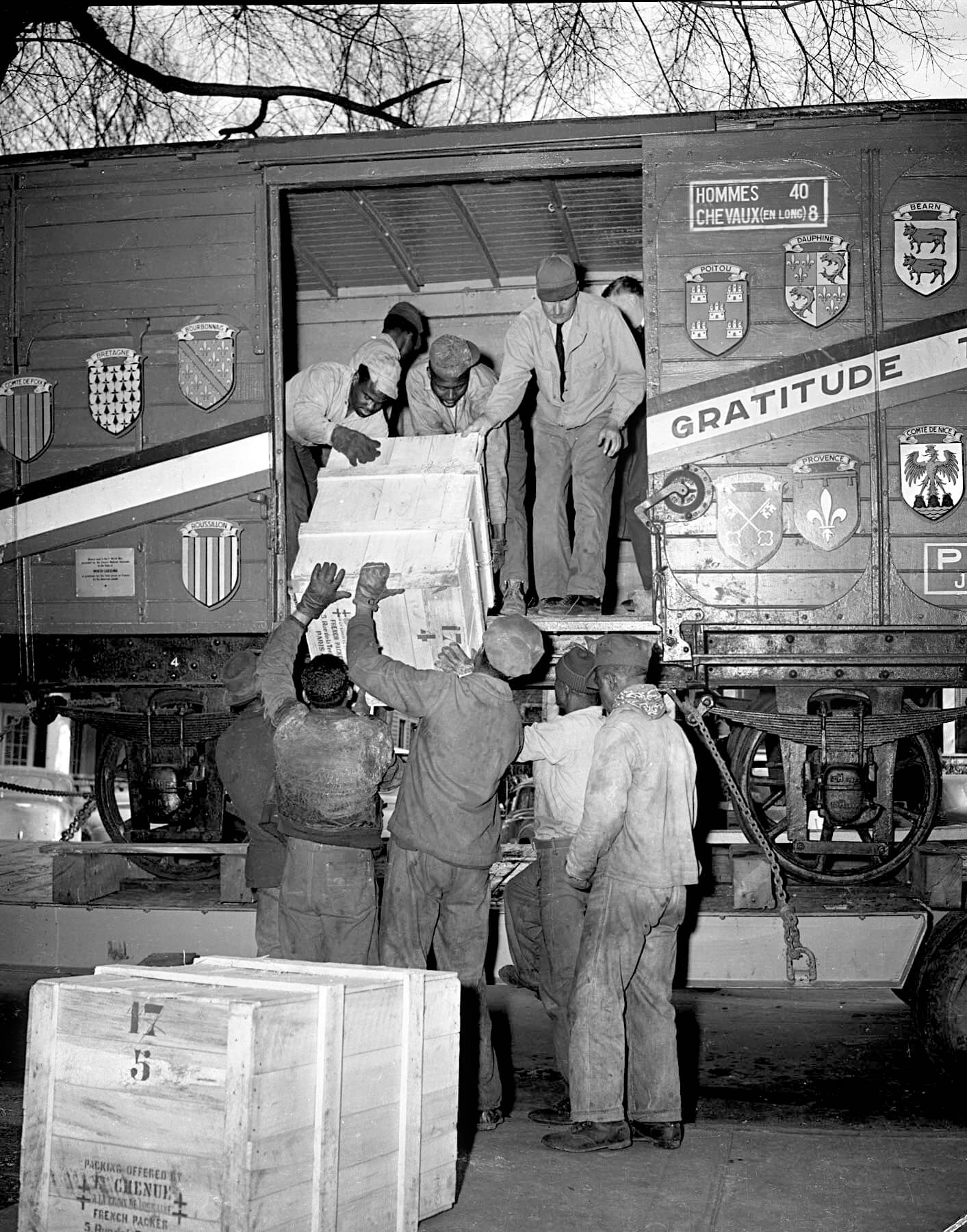 Photograph from the News & Observer, courtesy of the State Archives of North Carolina

Decades later, the contents of the boxcar can be viewed as a lens for the suffering experienced by donors, and their hopes for a brighter future. One, identified as B. Levif, sent three framed oil paintings with the humble request that they be given “to a white orphan, to a Negro orphan, and to a Jewish orphan.”

An affectionate gift came from a donor in the French city of Lyon, known for the production and weaving of silk. A community effort produced an elegant wedding gown, complete with veil, headband, and good wishes for a bride.

Despite these heart-tugging appeals, North Carolina officials — as with those in other states — decided not to distribute items to individuals. Instead, objects were provided to local institutions, where they could be enjoyed by the public at large. For example, a woodcut portrait of the Great Emancipator, Abraham Lincoln, was part of a collection sent to Bennett College in Greensboro. Additionally, a mobile museum exhibit built into a trailer visited towns across the state.

Many of the artifacts are stored at the North Carolina Museum of History. The original inventory, written in impeccable script on a legal pad, was later converted into typed file cards. Penciled-in notes indicate that several objects were sent to the Executive Mansion, the official residence of the governor. Loans include small portraits of Napoleon and Marie Antoinette, as well as a pair of vases “hammered from 75mm shells.”

Like the clover ring, the vases were produced by a French soldier in the trenches at Verdun. However, they were given with a full heart by the surviving soldier, Paul Laval of Paris.

It’s remarkable that people across France gladly donated such personal treasures, not knowing what would become of them. “They were gifts of genuine gratitude,” says Katherine Beery, registrar at the Museum of History. “And we take very seriously our responsibility to care for them.”