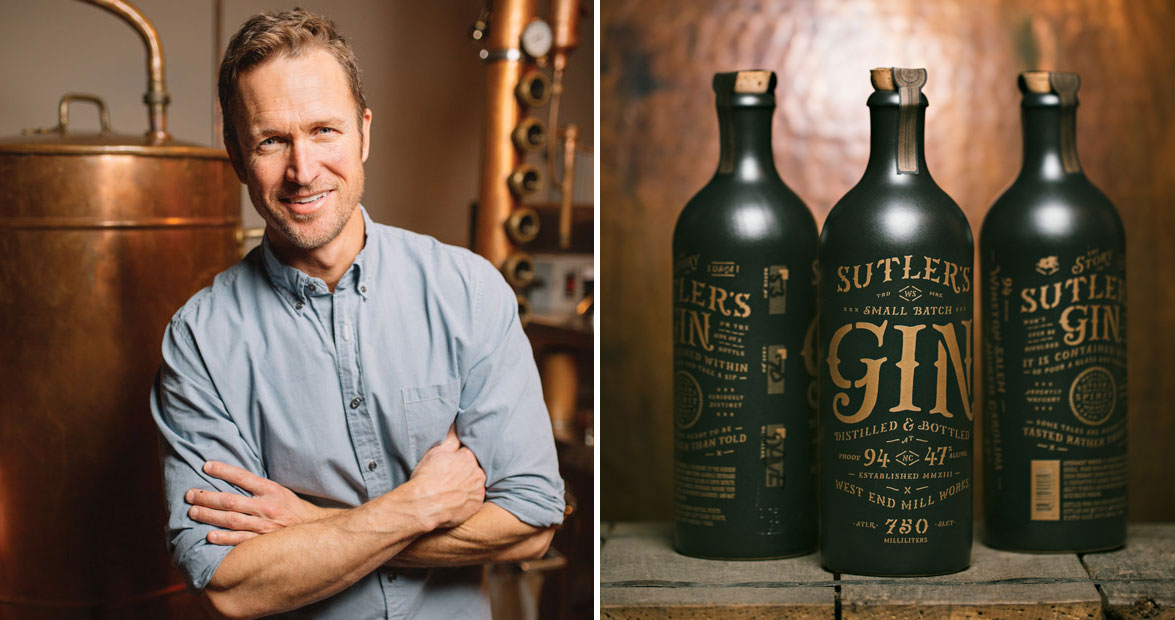 The group of 16 — including the mayor of Greensboro — who trickle in this Sunday are repeat helpers. This is not their first Sutler’s gin bottling rodeo. In a funky, two-room, concrete-floored space strung with small lights in Winston-Salem’s West End Mill Works, they take their assembly-line places: bottle washer, bottle dryer, gin filler, bottle wiper, corker, sealer, writer of batch and case number, box assembler, stacker. Scot Sanborn, the 44-year-old owner and distiller of Sutler’s Spirit Company, stands on a wooden pallet and thanks the volunteers for their help and for supporting a small business, and announces that Sutler’s gin just got its first order from Japan. “OK,” he says, “250 gallons of gin are ready to rock!”

Sanborn learned the term “sutler” while studying military history at The Citadel in South Carolina. The word refers to the merchants who accompanied traveling troops, supplying uniform patches, thread, used boots, coffee, and other supplies — and alcohol, if the commanding officer allowed it. Sanborn has been distilling for nine years; Sutler’s distillery has been in operation for four. Sutler’s gin is “citrus-forward,” Sanborn explains. Legally, for a spirit to be called gin, it has to taste like juniper berries. But Sanborn goes much further, infusing his batches with eight different botanicals, including lavender, coriander, and bitter orange peel. The idea is to tone down the juniper and create a gin that appeals to everyone, including non-gin-drinkers. One batch takes about 12 hours to distill, and produces 725 bottles.

There’s a satisfying bustle in the otherwise laid-back atmosphere of the communal bottlings, which are scheduled twice a month on Sunday afternoons, or on the occasional Friday night. Away from the bottling area, rustic tables loaded with dips, veggies, quiche, and cookies invite anyone so inclined to take a seat and have a snack. Moose, a fluffy, boisterous labradoodle, has the run of the place. Sanborn fiddles with his phone, selecting “a soundtrack to fit the bottling demographic.” Today, for this group of 50-something-year-old men and women, it’s Hall & Oates. Sutler’s intern Mariah Sharon, a senior at Salem College who wants to become a distiller, will just have to cope.

In the bottling area, tools of the trade dominate one wall: a copper column still, a condenser with a cooling tower, an oversize funnel just like the Tin Man wore in The Wizard of Oz, and a bowl of juniper berries from Italy, should you like a sample crunch. A pot still, handcrafted in Portugal, is for Sanborn’s rum, which has been aging — “working its magic,” Sanborn says — nearby in standard bourbon barrels of American white oak, charred on the inside, for four years now.

Sanborn gives tours of his operation to anyone who’s interested, but whenever he sends out an email announcing a Sunday bottling, the spaces are filled and a waiting list begins within an hour or two. There’s a sense of camaraderie among the attendees, and each bottling session of three hours results in around 115 cases of gin.

Sutler’s gin comes in a thick, charcoal-colored ceramic bottle, which is actually a German wine bottle. The volunteer tasked with marking the batch number gets the privilege of personalizing every bottle with a message on the unfired ceramic bottom: their initials, a smiley face, “Drink up!” “Enjoy!” “Lucky you!” It’s fitting that the gin is given such a personal final touch, considering the by-hand effort that goes into creating it.

The only problem with a heavy, opaque bottle is that you can’t tell when you’re about to run out of the gin. Better buy two.