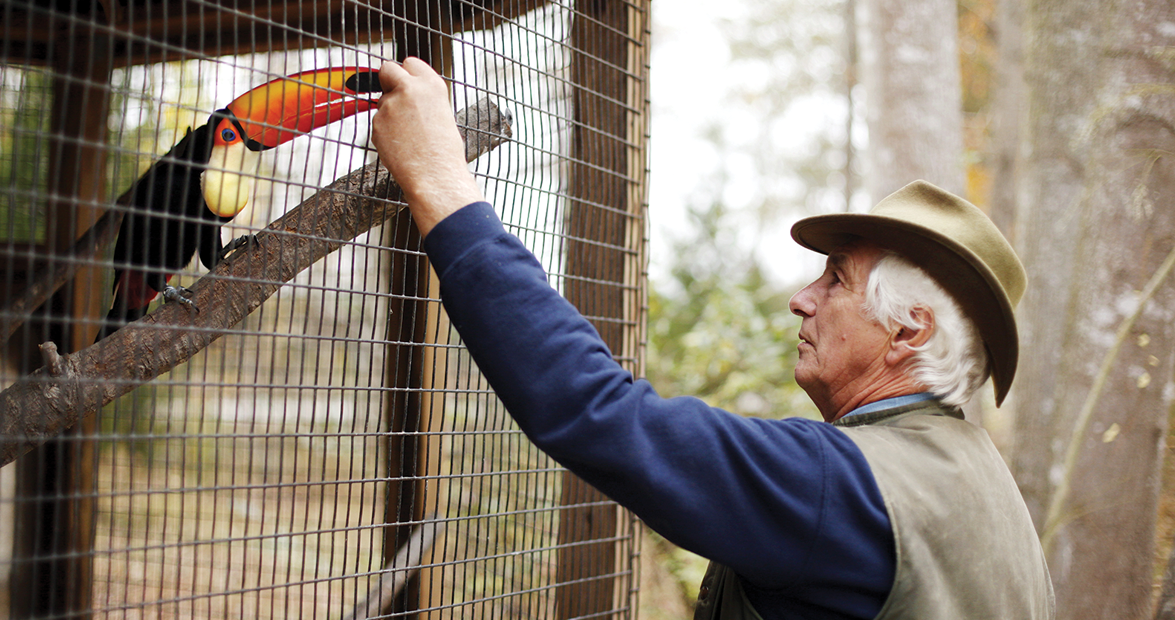 Mike Lubbock is a birdman. He created a bird park with about 2,000 birds. And they lay eggs, which is his favorite part, making more birds.

But to really know what makes a birdman a birdman, go to his home, where he lives as a man man.

In Lubbock’s house just outside of Scotland Neck, he has a fossilized egg of the extinct elephant bird on a shelf. There’s also a rhino penis bone, the base of a human skull, and a boa constrictor’s skin. But those things he’s collected in his travels don’t make him the birdman, either.

No, what makes him the birdman is this: Past the parrot that repeats “Hello, Sylvan Heights Waterfowl,” is a living room with four dozen paintings of birds. And saved on the DVR is “An Original DUCKumentary.” Lubbock has been awaiting this TV show for weeks; it’s like his “American Idol.” But first, his wife has dinner cooking.

As Lubbock’s top staff members chat at the table, Ali Lubbock cooks cottage pie, one of her specialties from their native England.

Mike Lubbock sits at the head of the table, and everybody passes the cottage pie around. They’ve been up since sunrise, working with birds. And now they’re at the birdman’s house, talking about birds. They talk of a time in Jamaica when they raced down to gather eggs from an endangered duck species. And they’re still talking about trips to Brazil, to Africa, and to zoos while scooping second helpings, until suddenly the birdman flutters off. From the other room, the “DUCKumentary” can be heard.

“Are you watching that now?” Ali asks.

Ali laughs. “Can’t it wait until after dinner?”

The birdman walks from his living room full of bird paintings, past the talking bird in a cage, and re-enters the dining room with his bird park staff. He reluctantly takes a seat to finish his dinner.

We should go to the place where Lubbock’s captivating birds live, home to more waterfowl species (160) than anywhere else in the nation.

Initially named Sylvan Heights Waterfowl Park, some people showed up in swimsuits expecting waterslides, so Lubbock changed it to Sylvan Heights Bird Park. Here, he also has 25 species of wetland birds and 50 other species — owls and hawks and a colorful Toco toucan.

The toucan is worth five figures. But some of the most priceless birds to Lubbock, you might not even notice. The Australian green pygmy geese cost $8,000 per pair, but his desire to keep alive the declining species is worth much more. He’s yet to successfully breed them, but every mating season he hopes for the miracle of life.

The main purpose of the Scotland Neck park in Halifax County is Lubbock’s main purpose — saving bird species. A breeding center rarely seen by the public is where the most important work is done, trying to mate rare waterfowl.

But that work isn’t profitable. So in 2006, Lubbock opened the bird park to visitors. There are North American, South American, Asian, Australian, and African areas. There’s an endangered species area, where Lubbock has several pairs of white-winged wood ducks, which were nearly extinct until Lubbock saved the whole species.

And there are many birds — like the toucan — that are here because they’re bright and people pay to see them.

But why? Why should we care to save birds? Lubbock has a story for that, too. 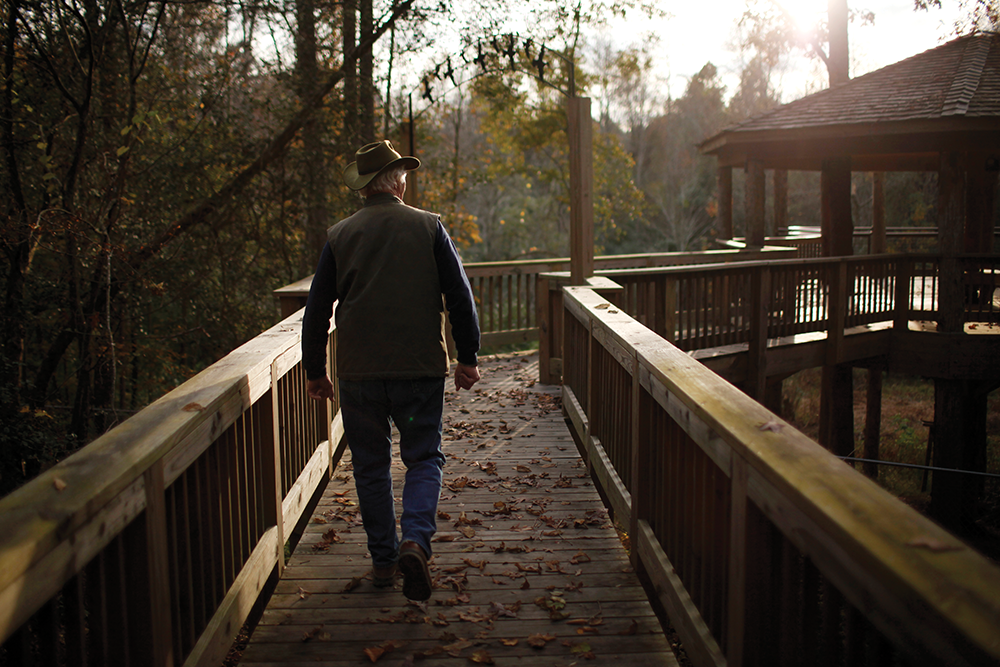 Years ago, Lubbock made an emergency trip to Guatemala to rescue a species around Lake Atitlán. The water was so clear, Lubbock could see the bottom 100 feet down. But as people introduced largemouth bass for recreational fishing, the bass ate up the poc flightless grebes’ favorite food — crabs. But by the time Lubbock arrived, only one small cluster of flightless grebes, unable to fly to another lake, remained. The species died.

“If we’d have gotten there sooner, we might’ve been able to help,” Lubbock says. That’s the hardest part of all of this, he says. “I’d rather see a bird live in captivity than see it dead in a museum.”

Growing up on a farm in rural England, Lubbock went outside one day and found a hole.

The hole was large enough to be considered a cave, so Lubbock went inside and found bats. He put several inside a saddlebag. And he rode off on his bike.

The next day, his mother grabbed the saddlebag for her daily ride to the post office. She got the mail and opened the saddlebag. Dozens of bats flew up at her as she unzipped the bag. “If you have a big hole in the ground,” he told her, “you have to go explore it.”

Most waterfowl aren’t glamorous. Some of Lubbock’s ducks are worth only $50 a pair. But Lubbock loves them for their traits — the webbed feet, the feathers they clean every day, the migration habits. Evolution is easy to see.

Take, for instance, mallard ducks and Canada geese. We see them so often because they’ve adapted to live among humans. Lubbock calls them the rats of the waterfowl world. They’re mean. They dominate. They’re products of adaptation and evolution and the survival of the fittest. 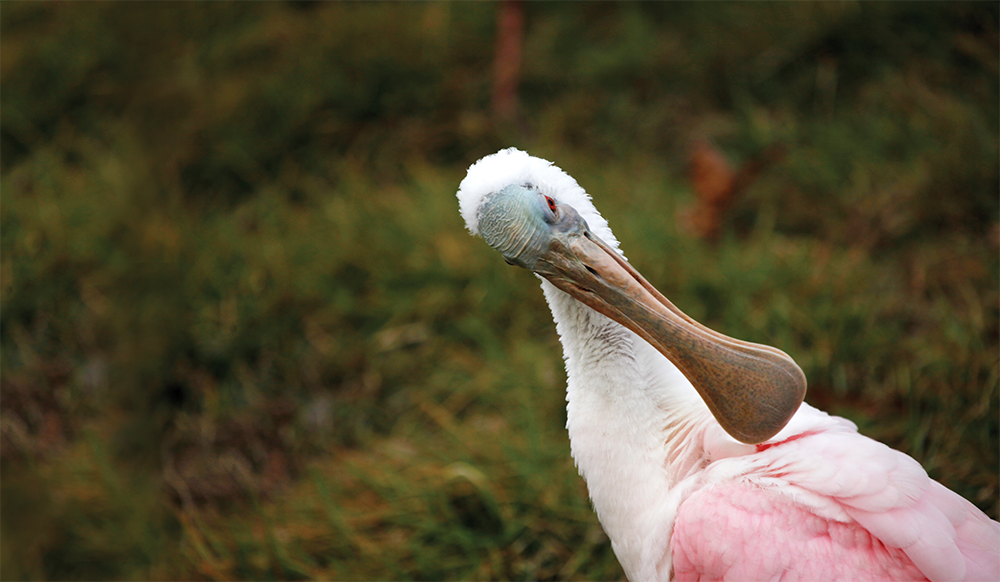 Lubbock, 69, began working at the Slimbridge Wetland Centre in England when he was 17. He’s been to every continent since, chasing birds.

The queen of England once invited him to the royal palace because her red-breasted geese were reluctant to breed. Lubbock advised Her Majesty to keep parties clear of the ducks’ living area. And he suggested changing the route of the helicopter that landed at Buckingham Palace. Within a year, Queen Elizabeth II called, thanking him: The red-breasted geese had bred.

The queen later visited Slimbridge. During her tour, she wanted to see how chicks hatch. So Lubbock invited her into an incubator room and pulled out a flashlight to shine on a transparent eggshell. He asked his staff members to cut the lights. As he lit up the egg, the queen’s security stormed in, worried because her highness was alone in a dark room with a birdman. But of course, she was fine.

Lubbock raised two ravens for the Tower of London. And he worked on air for a TV show called “Discs a Go-Go.” He met The Beatles and The Rolling Stones. Once, his bosses asked him to check out a new guitarist. Lubbock approved, and soon after, Eric Clapton’s career took off.

Lubbock couldn’t work in the public area of Slimbridge because too many people wanted his autograph. So he traveled the globe in search of birds in other places.

In Chile, his guide, a member of a Chilean Indian tribe, fell into the ocean and drowned when a wave rocked their boat. Lubbock was alone, lost at sea. He found his way to a nearby deserted island. For three days, he ate raw crabs and mussels and tried to purify water as best he could. He thought he’d die there. But on the third day, a fishing boat happened by.

He’s been in a plane crash in the Arctic and nearly died a few times from worm-borne diseases. But mostly, he’s found amazing things.

Back in his house, Lubbock has a rock from Chile dotted with fish-fossil indentations. He found it on top of a mountain, 8,000 feet above sea level. “It’s funny what we collect,” he says.

You can’t watch movies with Mike Lubbock. If a bird chirps during a scene, he knows whether that bird would actually be in that place or not.

“He ruined the movie Cast Away for me,” says his son, Brent. 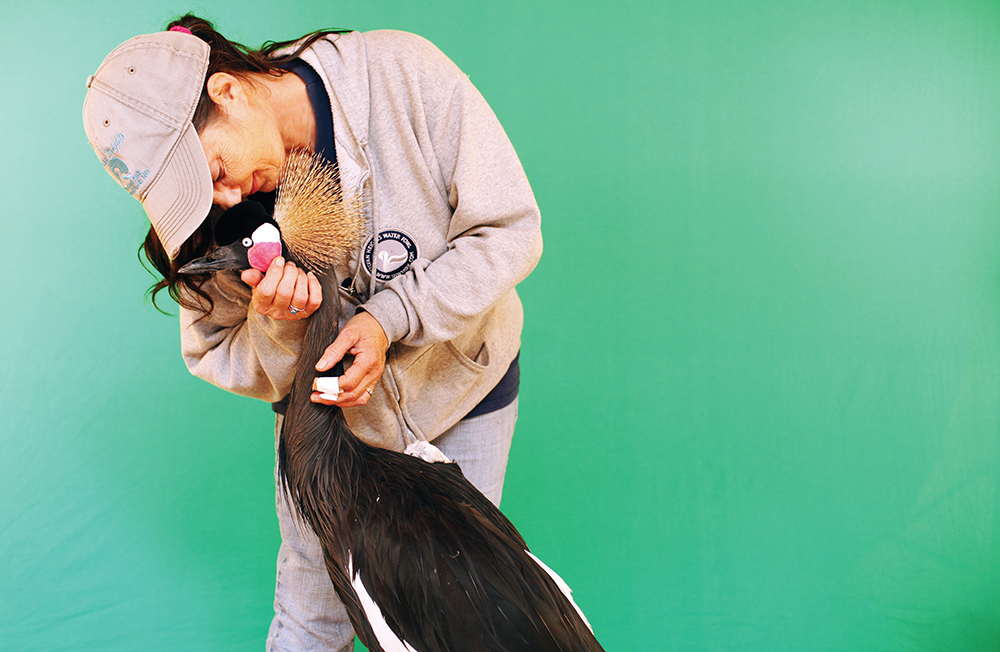 Knowing that, Lubbock’s dinner guests exit after the cottage pie is gone, leaving him alone with the duck documentary.

The next morning, he reports that the film “was pretty good” before listing several flaws.

There was a time, predating Lubbock, when Scotland Neck resembled a film itself. In the late 1960s and early ’70s, millions of blackbirds descended upon the town. They roosted just northwest of downtown and created a Hitchcock-like scene. Bird droppings piled several inches thick, and the sky was black for hours each day.

This was bird town, long before the birdman came here.

The most noteworthy birds now are under nets at Sylvan Heights. And the Lubbocks are off to lunch, seated by the window of an Italian restaurant. A farmer approaches. He raises crops just outside of town, and he has some good news.

“I saw a bunch of doves,” the farmer says. “Must’ve been a thousand of them. So whenever you want to come out …”

The birdman of bird town, the man who’s been to every continent to save things with wings, has just lined up his next adventure: He’s going dove hunting.