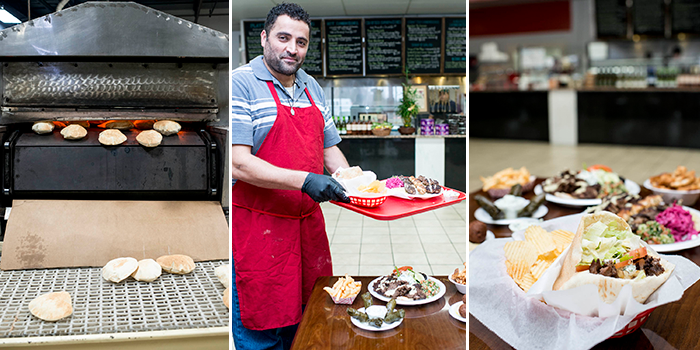 At lunchtime in Greensboro, workers and students venture from offices and classrooms to eat at Nazareth Bread Company. The spacious restaurant, housed in a former gym, has room for everyone.

Maher Said owns the restaurant with two of his brothers. “We’re trying to welcome everybody,” says Maher’s brother Mazen. “Whatever problems the world has, we put them aside. We treat everybody with love and respect.”

The menu reflects that philosophy: Alongside dishes like kabobs and falafel are American offerings like Angus burgers and cheesesteaks. But make no mistake: Those burgers are a part of the family’s mission to make every customer feel comfortable. The Saids don’t Americanize dishes brought from the Middle East. And in some cases, Maher and Mazen get to see Americans rediscover foods they thought they didn’t like. When customers come in and say they don’t care for hummus, the brothers offer a sample, because they know the power of “top-to-bottom, whole-nine-yards” homemade hummus, rather than the store-bought kind. “It’s mind-changing hummus,” Mazen says.

Growing up, Mazen and Maher and their 11 siblings helped their parents run a restaurant in downtown Nazareth. Maher first came to the U.S., to New York, intending to become a doctor, but he switched paths and attended the New York Restaurant School to become a pastry chef instead. He worked in upscale restaurants and served as the head chef at the Russian Tea Room before opening his own restaurant in Brooklyn, where Mazen worked when he first came to America.

In 1994, Mazen visited a cousin in North Carolina, loved the quietness of the landscape and the friendliness of the people, and decided to move to Greensboro. His cousin, who teaches in the dental school at UNC-Chapel Hill, took Mazen to eat at Chapel Hill’s Mediterranean Deli, and Mazen realized that Greensboro needed something similar. The Saids began building a menu that was friendly to customers who keep kosher and halal, to Americans, and to Mediterranean natives looking for a taste of home. When they couldn’t find a good place to get bread, they added a wholesale bakery, with pita, buns, and Turkish flatbread, plus pastries like baklava, tiramisu, and macaroons.

“This is a real Middle Eastern restaurant,” Mazen says. “If you go to Nazareth and taste a shawarma sandwich, you’ll taste the same thing as here. When you come in here and eat shawarma, it’s fresh pita, fresh meat, fresh hummus and vegetables. It’s good quality and good for you.”

Together, Mazen and Maher make dishes so common in the Middle East that “it’s like McDonald’s,” Maher says. “Falafel, shawarma — they’re the two main foods, like hamburgers and chicken sandwiches.” But in Greensboro, where it’s not so easy to find falafel (chickpea patties) and shawarma (slow-grilled and sliced lamb and beef or chicken) the Saids ensure that North Carolinians know exactly what these traditional comfort foods should taste like.