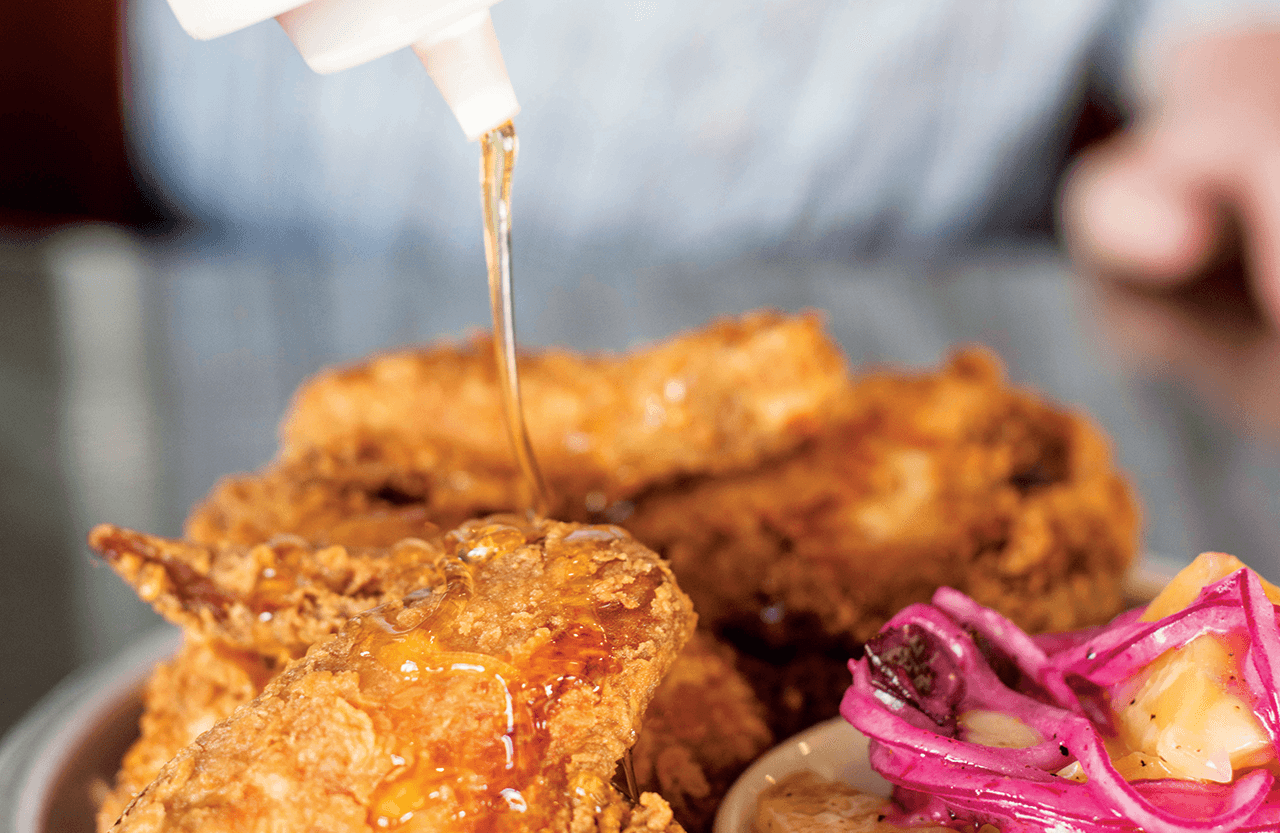 Fried chicken and waffles deliver a soul-satisfying blend of sweet and salty and soft and crunchy.

A dream date of down-home flavors, the dish has gone uptown in recent years, thanks to North Carolina chefs like Ashley Christensen, who helms a growing empire of Raleigh eateries. At Beasley’s Chicken + Honey in the capital city’s downtown, she shines a spotlight on the dish.

And in Durham, there’s Dame’s Chicken & Waffles, whose specialty is, you guessed it, chicken and waffles. You can spot Dame’s from a distance on Saturday nights and Sunday mornings by the long line of reservation-less hopefuls who don’t mind waiting an hour or more to get in. Once seated, patrons need more time to choose among at least five waffle flavors (including a vegan option) and seven “shmears” (butter-based fruit or spice toppings that melt and decadently puddle in each plump waffle square).

“People always ask which is our favorite, but we really want them to experience the flavor combination that sounds best to them,” says Damion “Dame” Moore, who runs the business with Randy Wadsworth. The two met as housemates while pursuing business degrees two decades ago at the University of North Carolina at Greensboro. They opened a Greensboro location in 2012 and aim to launch another North Carolina eatery this year.

New flavor combinations are always in the works. Last fall, customers raved about the combination of a gingerbread waffle with an orange-honey shmear, or a sweet potato waffle with maple-pecan. For a bite of summer, try the classic waffle with strawberry ’n’ cream shmear. 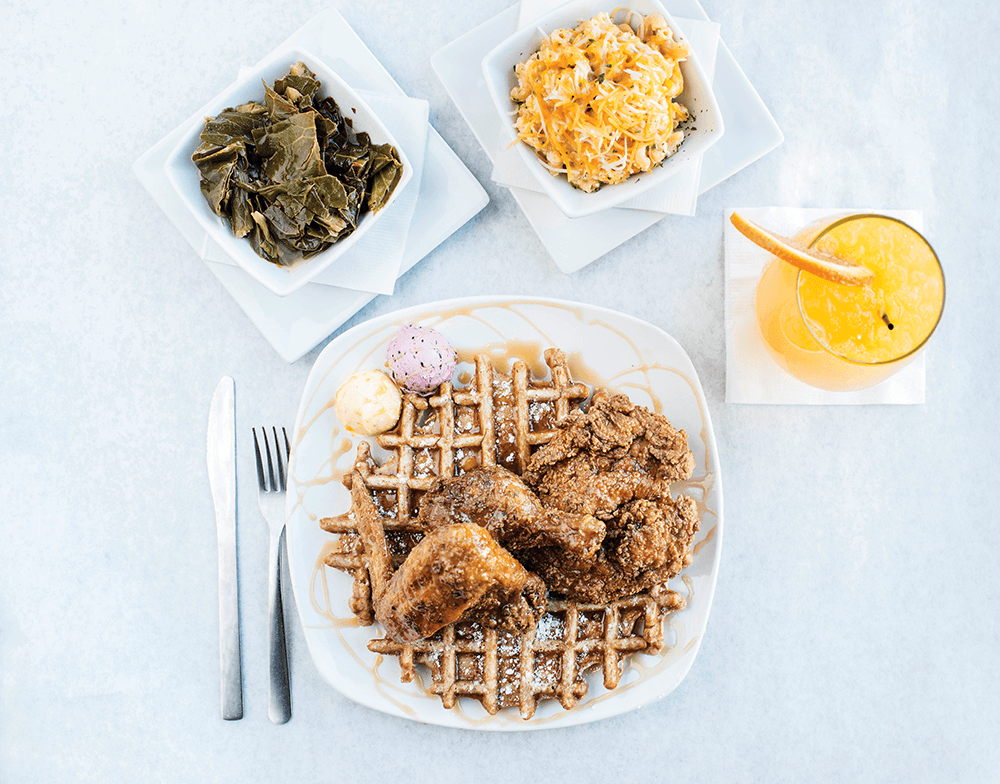 But the chicken is not merely a garnish. Before taking center stage, pieces of chicken take a two-day bath in spiced buttermilk. Crispy and succulent, the chicken comes either with a bone or without, for those who don’t want to use the bird’s natural handle.

But at Beasley’s in Raleigh, there is no boneless option. Choose between white- or dark-meat chicken, which has been brined overnight in salt-and-sugar water. Portions are dipped in buttermilk and dredged in flour just before frying to create a delectably craggy crust that’s drizzled with Bee Blessed Pure Honey from Princeville. Delivered atop a plate-filling, deep-pocketed Belgian waffle, it’s one of the few menu choices not available for takeout, as the crisp waffle can wilt in a to-go box.

Matthew Muñoz, a lean marathon runner, says it’s one of his favorite indulgences. Last September, when he proposed to Carolina Ballet principal dancer Lara O’Brien, the now-married couple enjoyed a whirlwind party capped off with late-night chicken and waffles at their favorite neighborhood place.

“I’d never had the combination before Beasley’s opened, but I love both of those things,” Muñoz says. “When I first tried it, I remember thinking, ‘I could get used to this.’ ”

A few blocks over in downtown Raleigh, Jose and Sons cleverly substitutes luxurious pork cracklings, or chicharrónes, for the traditional chicken. Chef Oscar Diaz says the chicharrón and waffles dish was developed for the new restaurant’s first menu, which infuses flavors of the American South into traditional Mexican food.

“I’d never even used a waffle-maker before we started experimenting with this,” says Diaz, who created a light, masa-based waffle that’s gluten-free. “I wanted the chicharrónes to be really rich, so I use pork belly. It took several tries, but I think we’ve got it now.”

Glistening chunks of pork cover the waffle, which is served with a dunking pot of sweet-and-spicy agave syrup and sriracha chili sauce and gilded with a pair of poached eggs. Diaz admits that it breaks his heart when diet-conscious diners trim away the meat’s unctuous fat.

“You can’t eat like this every day,” says Diaz, who jogs with his dog to stay trim, “but now and then it really is OK to just enjoy delicious food.”