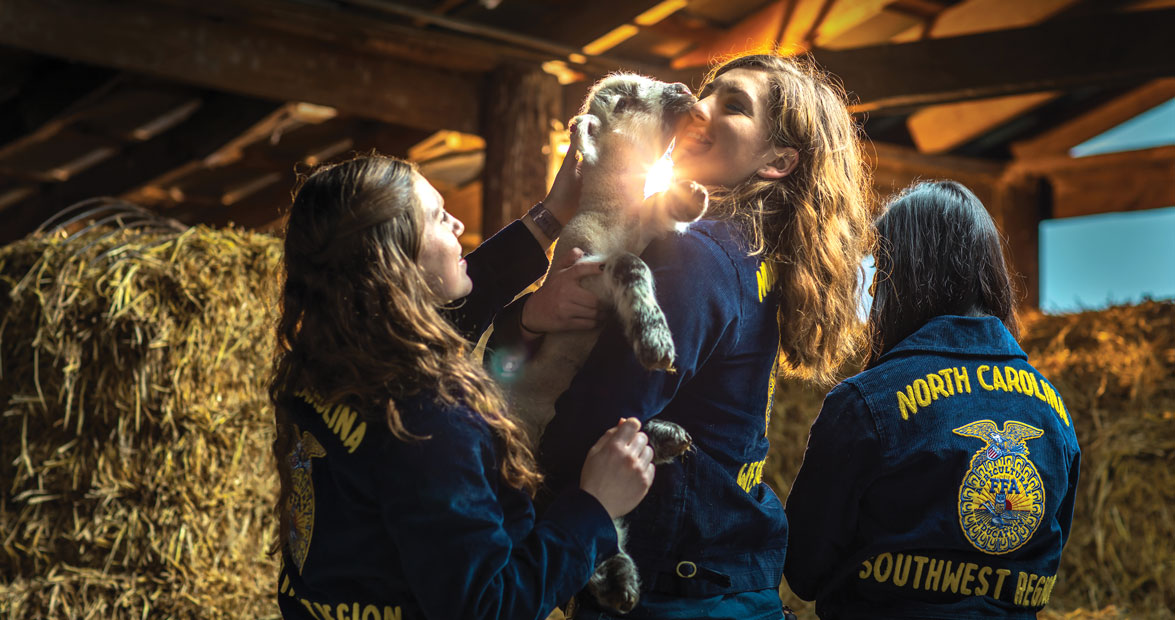 On a humid morning, halfway through first period, Nick Anders directs two high school students lugging a wheelbarrow and lopping shears toward some overgrown shrubbery. He pulls back limbs and shows them where to cut. Then, he gathers a few more students and leads them to the orchard beside the football field.

Anders is in constant motion. Since joining the staff at Southern Alamance High School in Graham 14 years ago, he’s been a man on a mission to elevate agricultural education. “Most vocational programs are out of sight, out of mind,” he says. “My program isn’t like that. If anyone important comes on our campus, the principal brings them straight to the ag department.”

He and his students landscaped the school as a recruiting tool. Tags identify each plant. When students ask about the plants, he tells them to take his class. With 450 student members, the Southern Alamance chapter of Future Farmers of America (FFA) is the largest in the state. Anders estimates that three-quarters of the student body take at least one agriculture class — and most who take one end up taking two.

The National FFA Organization is nearly a century old and still going strong in North Carolina, where enthusiastic teachers like Anders are able to pique students’ interest in agriculture, even in suburban and urban school districts. At the 90th North Carolina FFA State Convention last June, some 2,090 students came from all corners of the state to learn from each other, celebrate their school and regional pride, and share their common interests. Dressed in blue corduroy jackets — identical except for the name of the school on the back — they packed the Raleigh Convention Center for three days of competitions, seminars, and speeches that showed the depth and breadth of agricultural education and the new opportunities open to the next generation of farmers.

“Agriculture education still does what it was intended to do in 1928.”

To the casual observer, the event is much like a corporate conference. Everyone receives a program listing the day’s events, speakers give inspirational addresses, a career expo fills the bottom floor, and attendees break out into small groups for discussions. During the first general session, Sarah Swain, a graduate of West Carteret High School, takes the stage to give her final address as state FFA vice president. “You are strong enough. You are bold enough,” she tells the audience. “You are enough to change the world.”

If this were a corporate conference, full of adults with college degrees and initials after their names and budgets to manage, they might brush off that speech. But these attendees are teenagers, at just the right point in their lives to be stirred by such inspiring words. What’s more, they’re spending three days of summer vacation — dressed in heavy jackets, no less — to build precisely those skills they’ll need to shape their future. And ours. 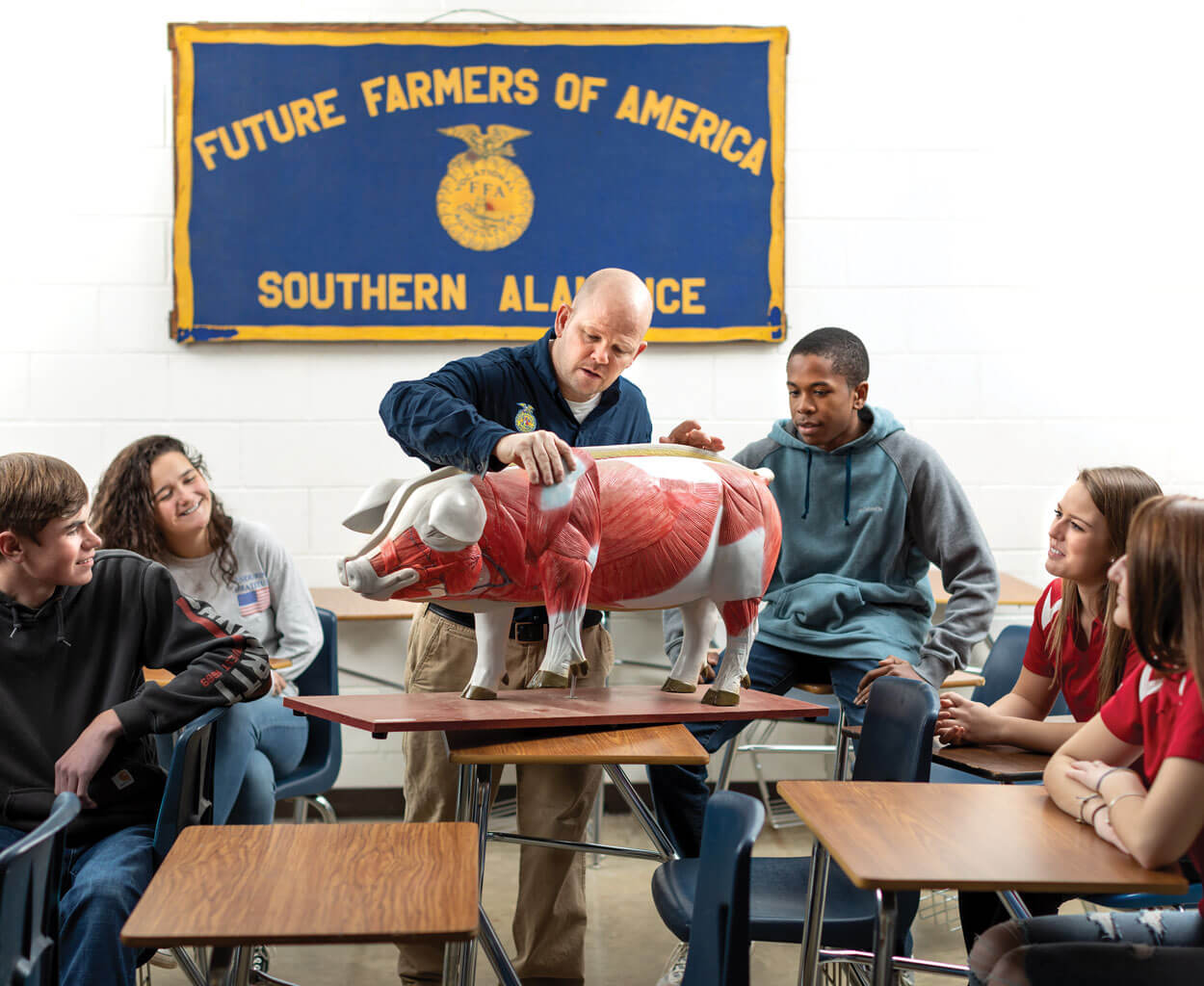 Gerald Barlowe remembers walking into his first state FFA convention 44 years ago as a 14-year-old freshman. He was in awe. One of the state officers was from his Halifax County high school, and he made it his goal right then to someday stand on that stage. A black-and-white photo in his office shows Barlowe with his five fellow state officers in 1978. Ever since then, he’s been dedicated to the organization. This past January, he retired as state FFA adviser and state agricultural education leader. At the state convention in June, he received a lifetime achievement award.

“Sometimes I wonder,” Barlowe said in his acceptance speech, “are we really reaching and empowering them? But this past weekend, when selecting state officers, I watched 21 young people who have been molded and shaped through this organization. Agricultural education still does what it was intended to do in 1928. We know that what we do works.”

Agricultural education in North Carolina officially began in 1911, when the General Assembly passed the County Farm Life School Act. As the program grew, teachers saw a need for a supplemental organization to encourage competition and leadership. The Young Tar Heel Farmers club was incorporated in the fall of 1927. The national organization of Future Farmers of America formed the following year, and the Young Tar Heel Farmers transitioned to the North Carolina Association of Future Farmers of America. 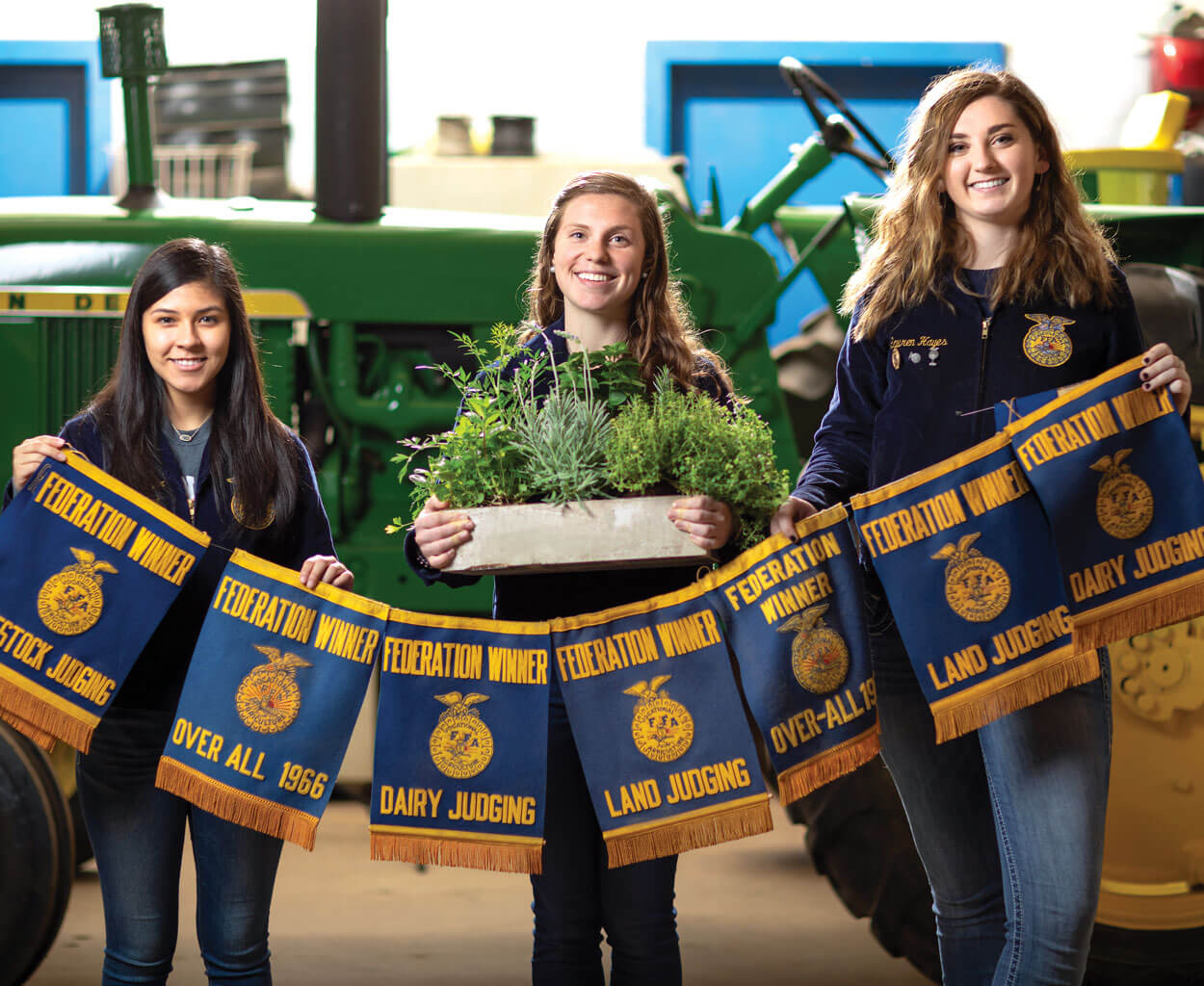 Today, North Carolina FFA has more than 19,400 members in 286 chapters across the state — supported by some 500 agriculture educators — making the state association the eighth largest in the nation. The success of FFA is due, in part, to its willingness to change. The organization has evolved structurally and culturally since its founding. Although FFA still stands for Future Farmers of America, the group’s name was officially changed to National FFA Organization in 1988 to better represent the broadening scope of agriculture and its related careers.

John Arthur remembers that shift. During high school in Georgia, he was a member of FFA. Now, he works for John Deere’s global property management division based in Cary and is a member of the NC FFA Foundation advisory board. “In the late ’80s, farming had a bad name,” Arthur says. “Counselors were telling kids to get college degrees. Don’t do welding. Don’t do farming. Get an office job.”

But those skills are now in demand, and corporations like John Deere are looking for workers with hands-on vocational experience. As more food is needed to feed a growing population, companies want employees who can apply the latest technological advances to the agricultural space. Maintaining industry relationships with those businesses enables agriculture educators to stay current in the skills they teach.

Even relatively urban areas, like Wake County, are seeing an uptick in the demand for agricultural education. One driver is the concentration of agriculture-related businesses in the Triangle, many of which take cutting-edge technology and apply it to traditional farming practices. Researchers are studying crops that use less water, for instance, or thrive in warmer temperatures. They’re looking for plant-based cures for chronic illnesses. Even if the students who study agriculture in high school don’t pursue it as a career, having a level of literacy on the topic is important. “Our students go in all different directions,” Barlowe says. “But whatever they choose to do, their training and leadership skills put them a step up.”

Girls were allowed to join FFA in 1969, and the organization took on a new level of expansion. These days, when Caroline Sheffield McKee attends an agricultural educators’ conference, she estimates that 60 percent of attendees are women. McKee, who’s now in her sixth year at Trinity High School in Randolph County, is a third-generation agriculture teacher. Her grandfather taught the subject in Montgomery County from 1952 to 1987. Her father, Everette Sheffield, retired from Southwestern Randolph High School after teaching agriculture for 31 years. He remembers his father tabulating grades with an adding machine at the kitchen table.

“Our students go in all directions. Their training and leadership skills put them a step up.”

McKee majored in agricultural education at NC State and quickly learned, as her father and grandfather did before her, how to break through the current crop of cultural distractions and make a connection. Her first horticulture class at Trinity had 12 students. She now teaches multiple horticulture classes in a single semester, with more than 30 students in each class. Trinity’s FFA membership has grown from 60 students five years ago to 120 today.

The key, she says, is showing students your passion. “I was talking about ferns a few years ago,” McKee says, “and I was getting into it, and a student said, ‘You really like your job, don’t you?’ And I was like, ‘Yeah, I have the best job in the school.’”

Having women as teachers and mentors has helped bring more girls into ag classes — and now those girls are pursuing leadership roles. At West Rowan High School in Mount Ulla, the 12-member FFA officer team includes 11 girls and one boy. The day before the regional FFA conference, they gather at school to prepare. President Mayerlin Alpizar lived in big cities — Mexico City, Los Angeles, Houston — before moving to Mount Ulla. She’s the only Hispanic member of the officer team and will lead a workshop on diversity, focusing on cooperation: how to listen to and include all voices. Cultivating an inclusive attitude, she says, will serve her well as she pursues a career in the medical field. 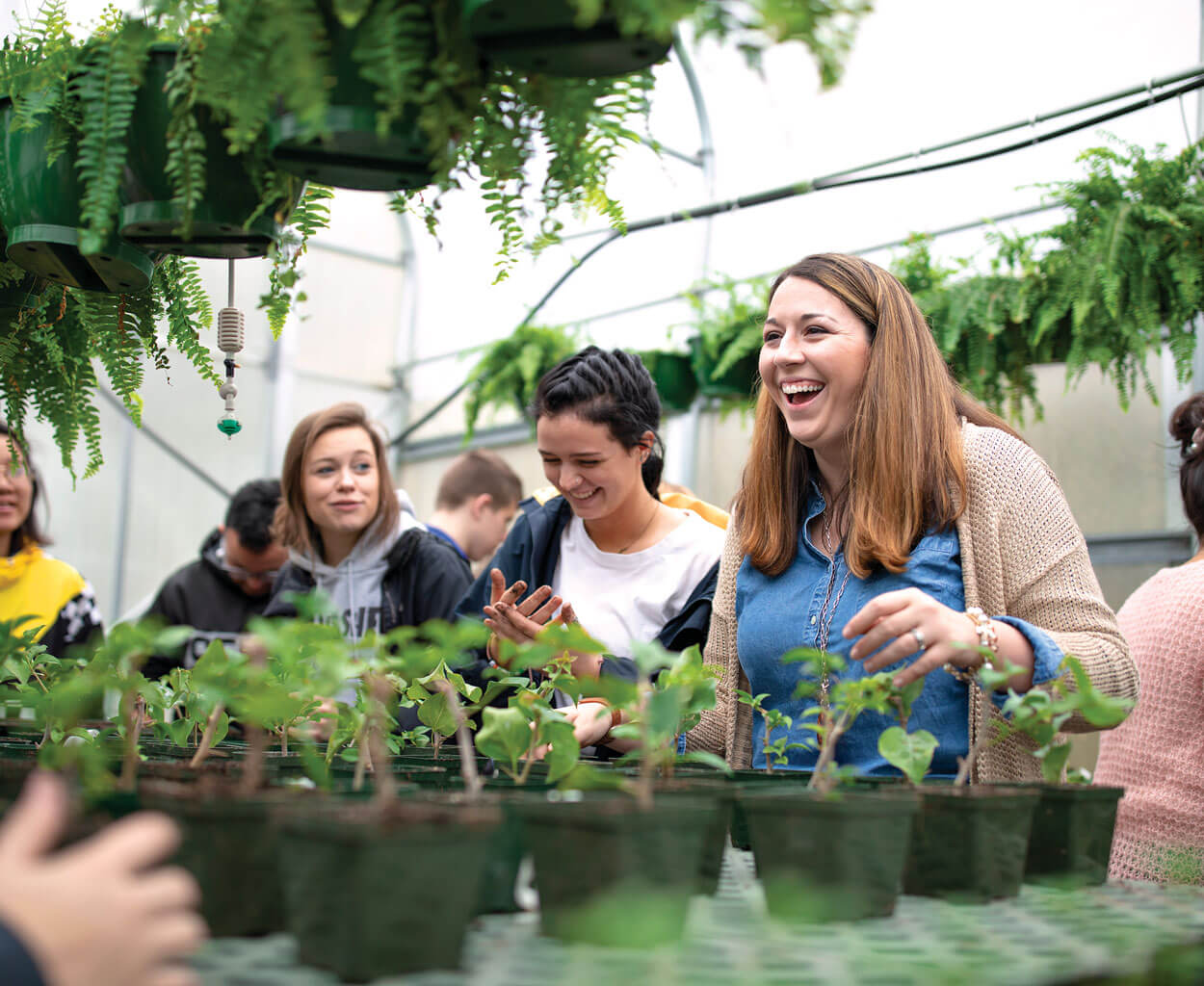 Vice President Ryley Corriher’s workshop will focus on self-awareness. She grew up in a loving household, but she knows that not everyone is that fortunate. She wants students to understand that there are tools available to overcome life’s challenges and that FFA can help you find them.

Junior Lauren Hayes’s area of interest is animal science. When she heads outside to the school’s livestock barn, where they keep sheep, chickens, goats, and cows, she lights up. In 2018, the school received a Tobacco Trust Fund grant for laparoscopic artificial insemination of its sheep herd. Hayes has been known to arrive several hours before school starts to give the sheep shots to prepare for the procedure.

Although she works with sheep at school, poultry is really her passion. “I’ve wanted chickens since I was tiny,” she says with a smile. “I have 50 head at the house right now.”

The FFA motto goes like this: Learning to do, doing to learn, earning to live, living to serve. Members are taught to take their classroom knowledge and apply it to real-world problems. What these problems are depends on the student.

Lindsay Long, Southern Alamance’s 2018 valedictorian, competed on her school’s FFA veterinary science team, and she’s now majoring in animal science at NC State. For a high school club to have that kind of positive, long-term impact, there must be strong leadership at all levels. Long says that her teacher, Nick Anders, “is the driving force of that club. He tries to push you to do more than you think you can.”

Anders arrives at Southern Alamance at 6 a.m. Before the bell rings, 100 students gather in his shop. They play Ping-Pong, catch up on homework, and take selfies. If a kid is quieter than normal or sitting by himself, Anders makes a beeline. “If you show a kid you care, they’re going to run through a wall for you,” he says. “These kids would do anything in the world for me.”

This past October, he took 10 students to the National FFA Organization Convention in Indianapolis. In the career-development competitions, his nursery-landscape team finished first in the nation, and his floriculture team finished second. The reason they won, he says, is that they outworked everyone else. After winning at the state level in June, the teams practiced every other day throughout the summer. In September and October, they practiced daily, including weekends.

“I don’t have any kids, so these are my kids,” he says, a hitch in his voice. “I want them to learn to be respectful and have a good work ethic, and if they learn a little ag science along the way, that’s fine.”