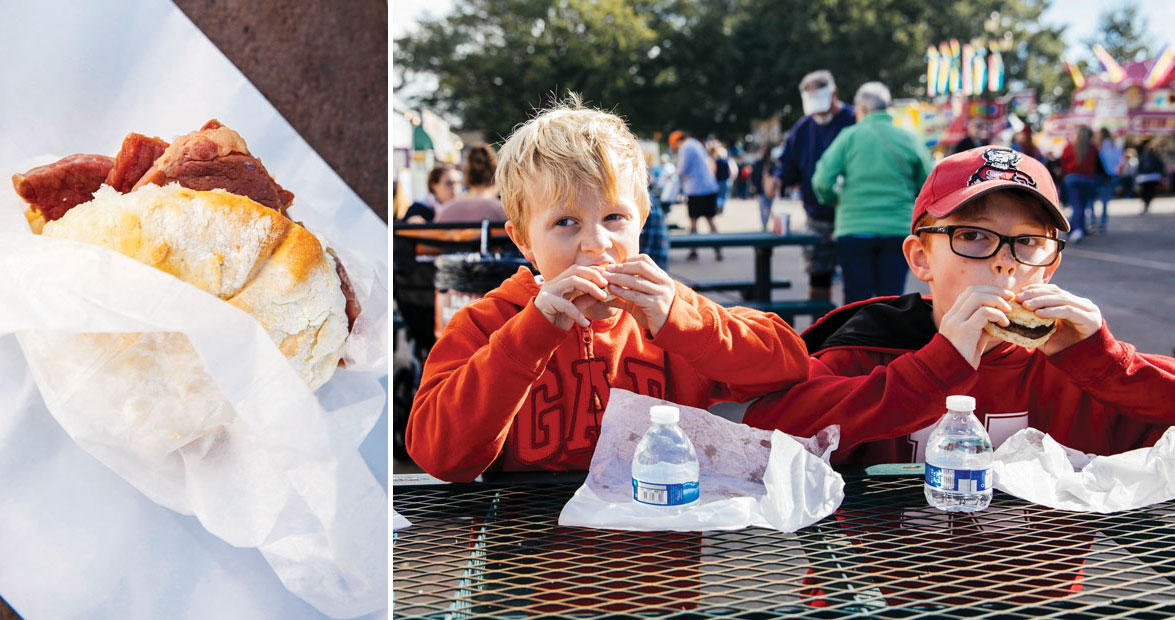 here is no written recipe for First United Methodist Church Cary’s country ham biscuits. For nearly six decades, the technique has been passed down from older women to younger ones, a tradition that those who make the biscuits at the North Carolina State Fair are proud to maintain. The church’s crowded stand is a testament to the result: biscuits that visitors crave.

It takes 100 volunteers to staff the stand each day, including biscuit makers, ham cookers, servers, cashiers, and cleanup crews. To handle the workload, the church joined forces with another Cary congregation, White Plains United Methodist Church, and now both share the proceeds for mission projects.

During each shift, teams of two make the dough by hand from self-rising flour (Snowflake brand), handfuls of vegetable shortening, and glugs of buttermilk. Nothing is measured — they add amounts by feel. After rolling out the dough and cutting it with an empty eight-ounce pineapple can, they put the biscuits in the oven and start the next batch. “Stuffers” take the baked biscuits and add the country ham, which other volunteers have doused with coffee and griddle-cooked. Groups work in five-hour shifts for each of the 10 days of the fair, making biscuits from the moment the gates open until after the closing fireworks.

“I remember doing 1,200 biscuits in a shift once. It’s flying back there,” says First UMC Cary member Serena King. “We get a rush after the fireworks end, for some reason. People come for takeout, get 10 or more biscuits.”

Obviously, the stand is too busy for on-the-job training, so the church holds a class for new volunteers, some of whom have never even made biscuits at home. “People come for the tradition, even if the biscuits vary a little,” says new trainee Becky Broom. Besides, what’s being made in the stand’s cramped kitchen goes beyond biscuits. “I’ve made lifelong friendships here,” King says. “And it’s amazing to hear people say, ‘We just have to get a biscuit from the Cary church booth.’”